The Duo have been playing together, with K remaining lying down and R dancing around her. They usually don't frolic indoors very much so it's wonderful to see. 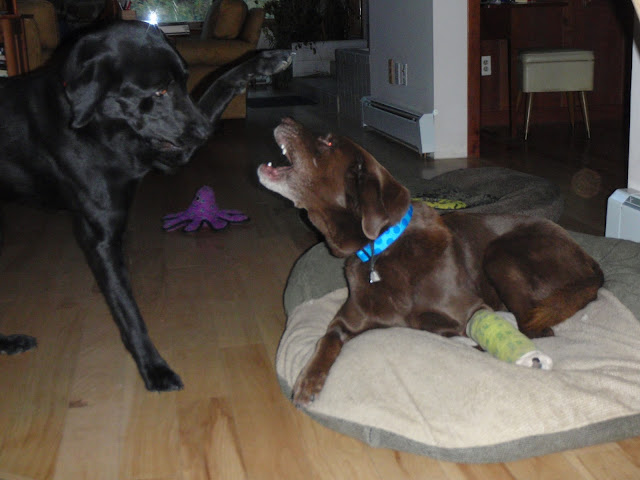 After playing, they snuggled together. Throughout each day, R regularly checks on K, sniffing her head and then her bad leg. Purple Octopus always oversees their play and naps. 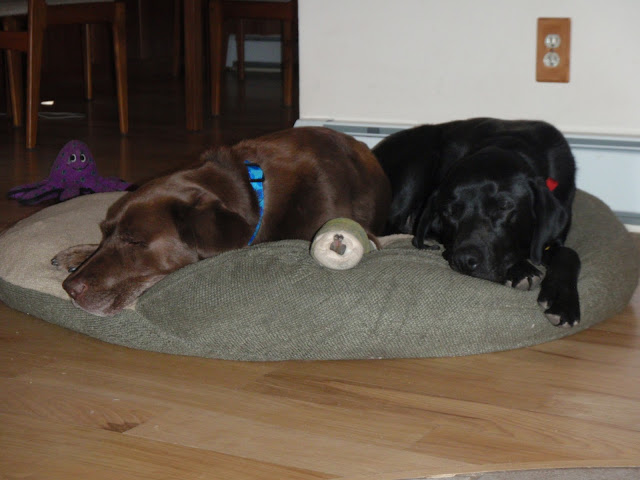 Meanwhile, I've spent time with each of the Duo separately. K and I take short walks. Now, as we go to the door, she lifts her paw and waits for me to put on her cast protector. The vet will change her cast tomorrow so it looks a little frayed now. 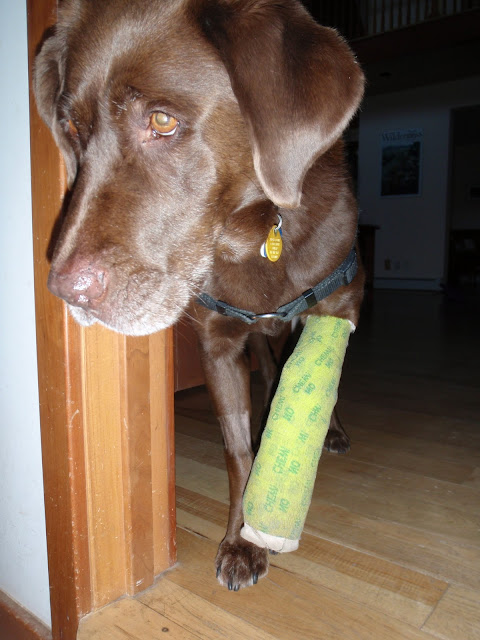 I love my morning strolls with K the most. The forest is peaceful and dappled in sunshine. 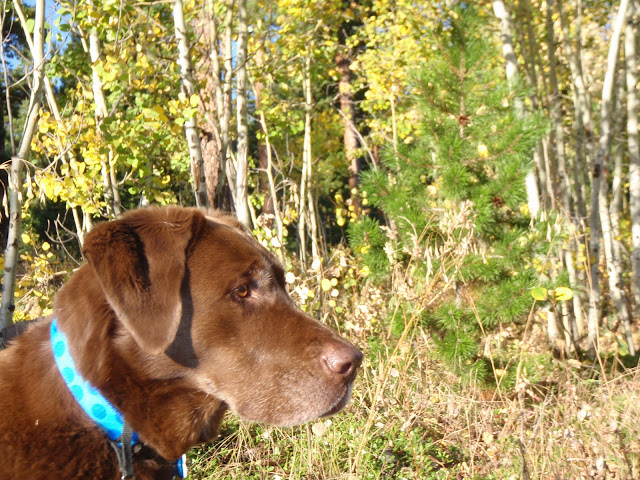 The sun lays so low in the sky that K's head makes a shadow on her own body if she turns it just right. 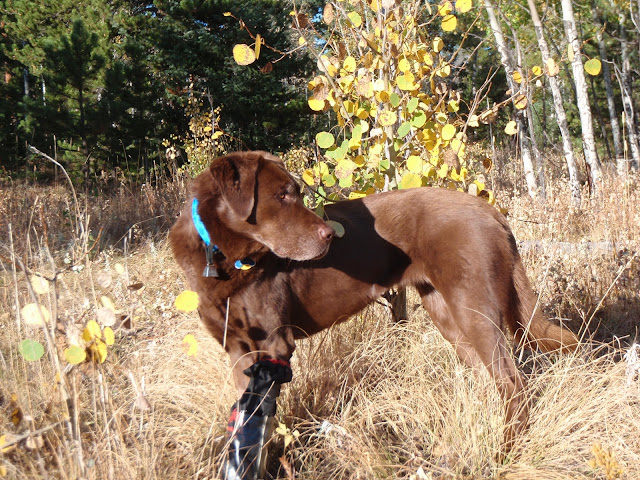 When she hears an alien sound in the forest, her tail goes straight up and she assumes her stiff, "I'm the boss", posture. It's a posture that always seems out of place for gentle K. We've noticed that this posture is one of her main tools around the house in getting R or other dogs to do as she wishes. When her tail goes straight up, they follow her orders. 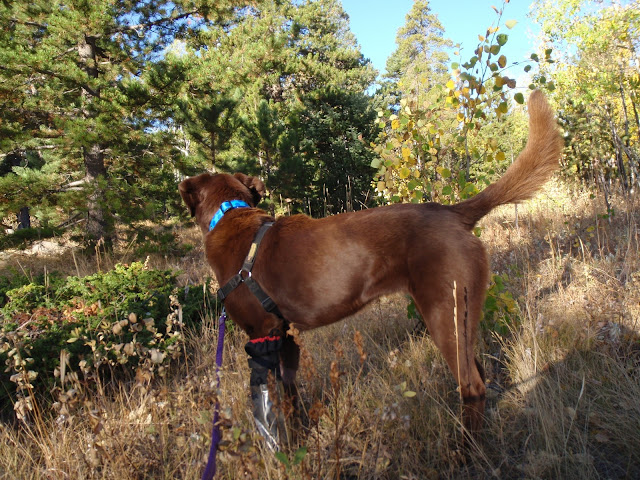 I have continued my intensive training with R, both for the sake of the better behavior that comes out of it, and because his obsessive-compulsive tendencies diminished almost immediately after I started the program. His water drinking has decreased dramatically, a huge relief for us. One of the games that we're playing is that we hide a toy at sometime in the day when he's not looking. Then, when he starts a water-drinking binge, we ask him to find the toy. With a little prodding, he'll stop drinking and start searching. The hope is that, after many repetitions, he'll respond to the urge to binge drink by finding a toy instead. For now, we have to prompt that behavior.

As part of his training, I'm giving him more mental challenges such as learning some agility. I started with the teeter-totter propped on wood blocks so that it was almost level. Now, I've decreased the blocks to about 9" thickness, and he's still very comfortable with teetering! Here, he started across our home-made teeter-totter. 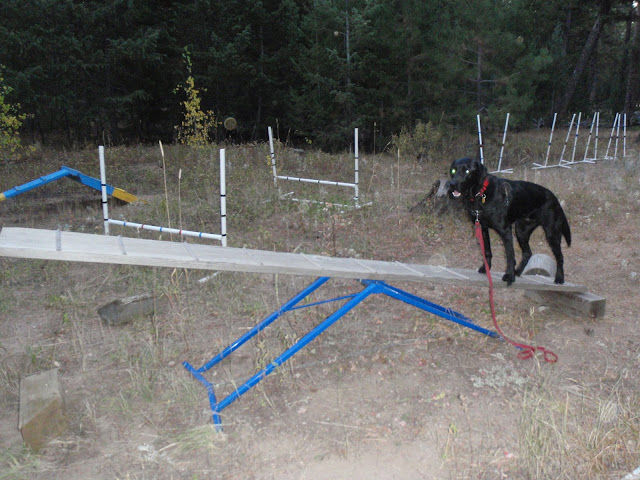 And, after successfully crossing it, he decided to sit for the photo! That's fine with me for now. I'm having a blast teaching such an eager pupil! 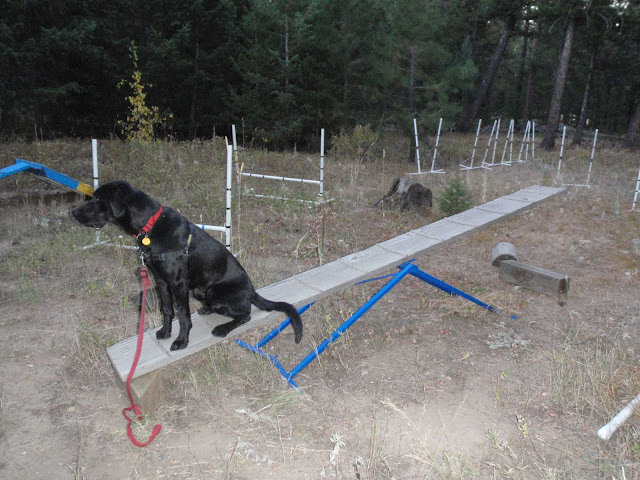 We've also been practicing recalls and other basic training in all sorts of settings but the forest is my favorite training ground. 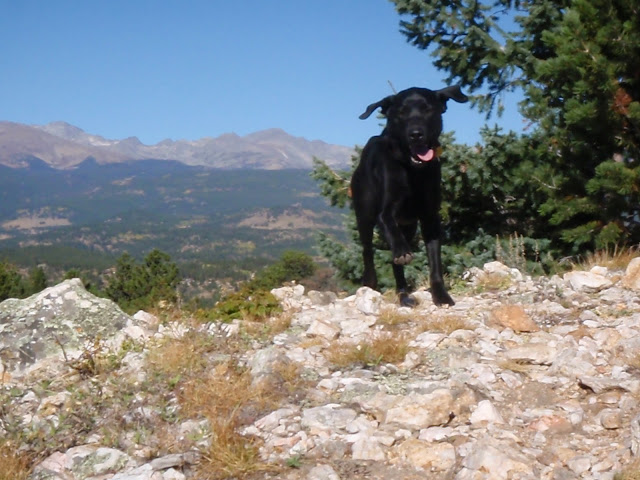 My mountain bike rides have mostly been solitary and contemplative affairs. I've been seeking the deep forest, where I mingle with the animals but don't see other people. I'm suffering from withdrawal - I truly miss my mountain biking with K. During my solitary rides, my mind wrestles with worries about whether she'll ever be able to return to it. Hopefully, I'll eventually reach peace with the notion of no more mountain biking with K - and be pleasantly surprised if she can run with me.

This is the kind of trail that I've been frequenting. Many more bobcats, lions, and bears travel this trail than people. 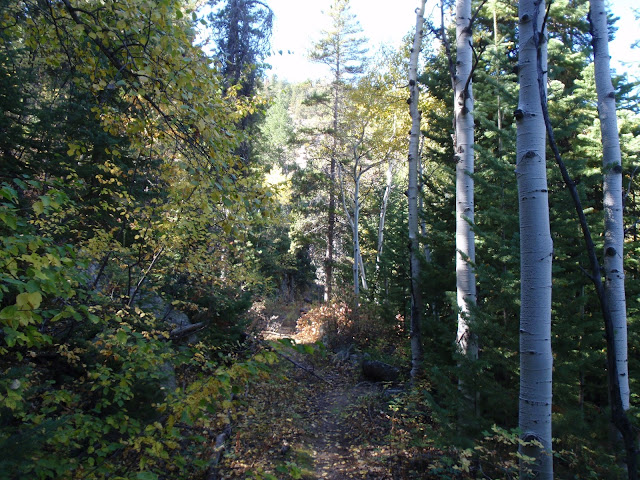 Despite my tinge of melancholy on my bike rides, I still get shocked into a happier frame of mind when I emerge from the forest depths to the fleeting brilliance of autumn. 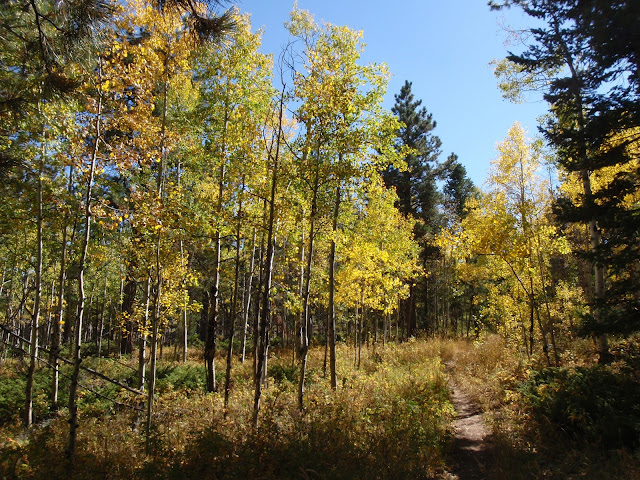 Life is such a mix of happiness and sadness simultaneously. With age, I'm learning that's the way life is, and I can't change it. My dogs remind me to enjoy the good in each moment. Indeed, in that first photo of K, she's playing like a puppy despite her bad paw. Carpe Diem!
Posted by KB at 5:45 PM