Early in our trip, we wanted to go to a campsite that involves seriously rough 4 wheel driving. My spine can't handle rough driving. Our solution is for me to ride my bike via singletrack trails to meet the pack at the campsite. Thus, I do a "point-to-point" ride that goes far from any road.

Unfortunately, the morning of my point-to-point ride dawned cloudy with a very high threat of thunderstorms. These point-to-point rides normally scare me, due to how isolated I am during the ride. But, when you add storms to the mix, my fear goes into overdrive.

When I took the photo below, we still hadn't decided if I should "go for it" or not. I tried to focus on the pretty flowers rather than the early-morning stormy mountains. 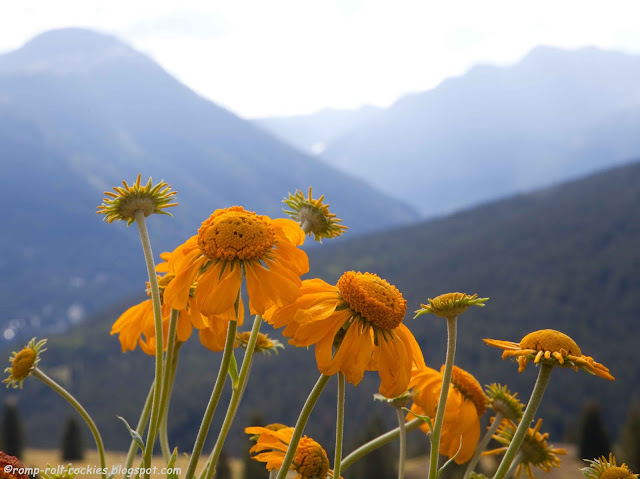 We did the first half hour of the trail as a pack to assess the weather. The sky was gray but the beauty kept shining through. 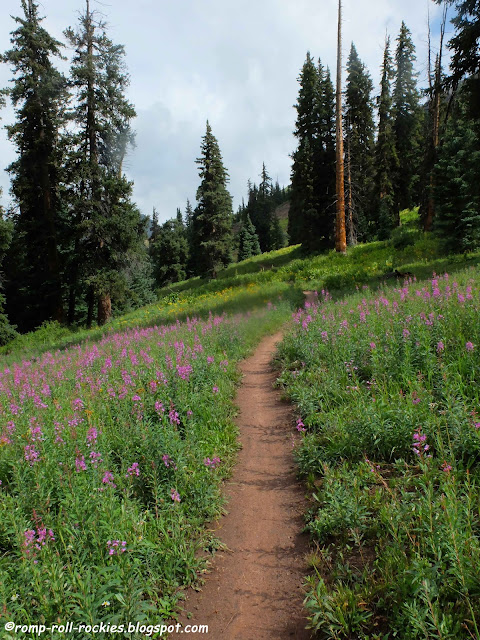 After the half hour, I was still not sure what to do. Finally, I simply decided to go for it. I had good rain and warmth gear with me plus an emergency beacon. Despite my niggling worries about these point-to-point rides, I do love them, and I didn't want to miss out on a favorite.

Shortly after I made my decision to go for it, I found Northern Flicker's feather on the trail in front of me. For some reason, I felt convinced that it was K's way of sending me strength and courage for the day. I tucked it in my pocket, where it gave me strength all day long.

As I rode, I realized that, as long as I looked forward, the weather looked decent. I could even see some blue sky. 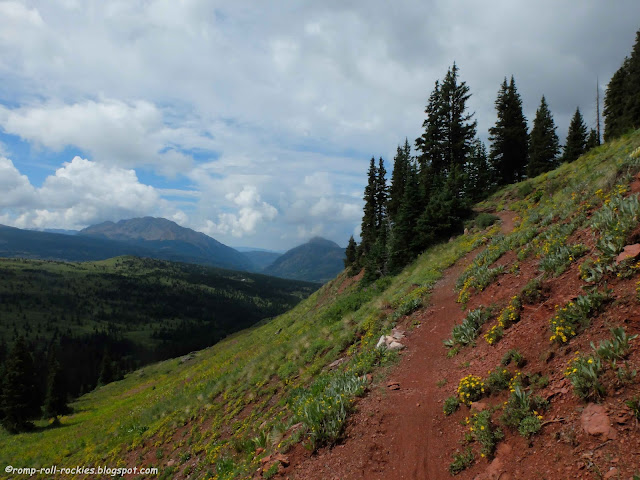 When I looked behind me, I tended to panic because the clouds threatened to engulf me. 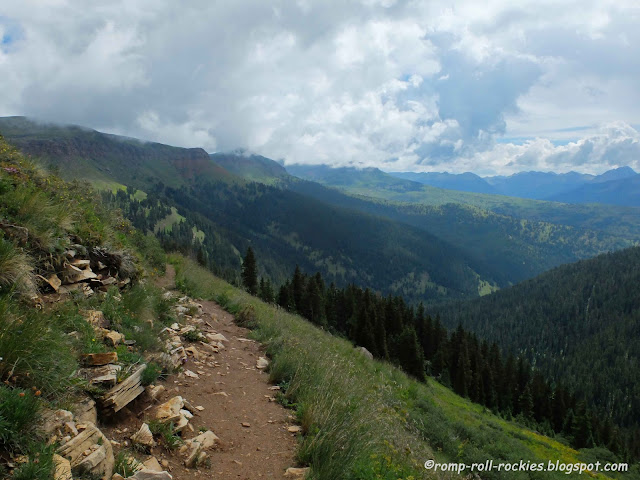 So, I decided that I would not, under any circumstances, look behind me again. It worked! And, as I pedaled, I realized that it was a good metaphor for how to live life. Eagerly seek what's ahead of you but don't brood over what's behind you. That's easier said than done, I know.

After a couple of hours of pedaling, I was climbing up toward the highest point in the long ride, a pass over 13,000' high. The flowers were getting more beautiful as I climbed. 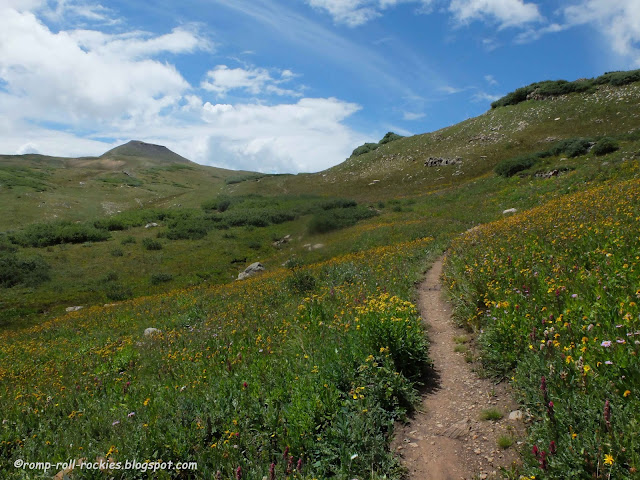 It's a long climb but, before I knew it, I was ever-so-slowly approaching the top of the pass, and blue sky still peeked through the not-too-threatening clouds. 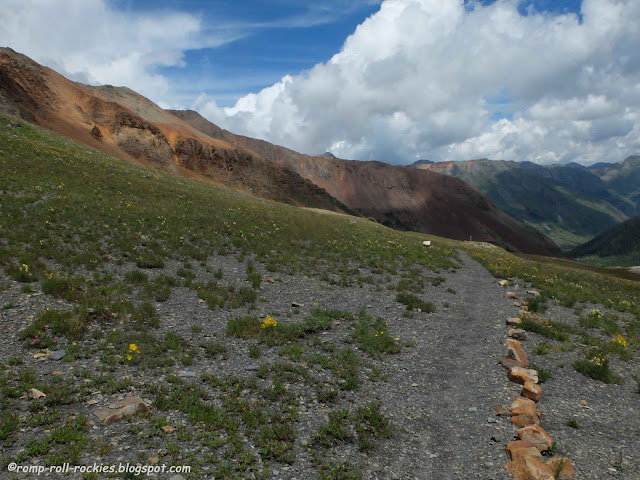 I paused briefly at the top, gazing at the craggy peaks all around me before I started the rocketing descent from the pass. Actually, I didn't "rocket" for long because the flowers on the other side of the pass were awe-inspiring. I stopped to look at the hillside above me. Wow. Nature puts on quite a show! 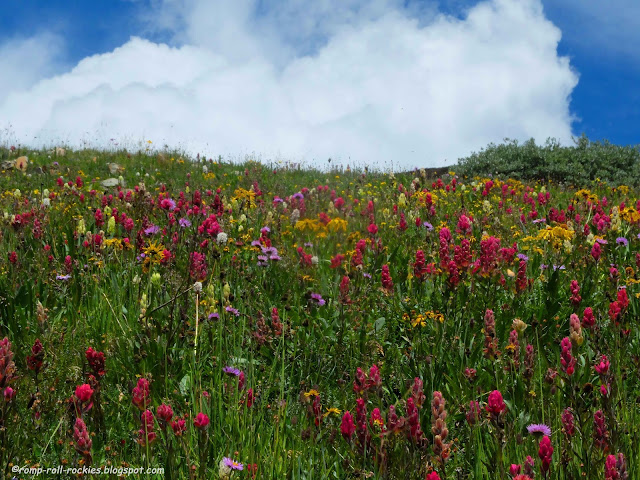 So then, I had to stop and smell the wildflowers. 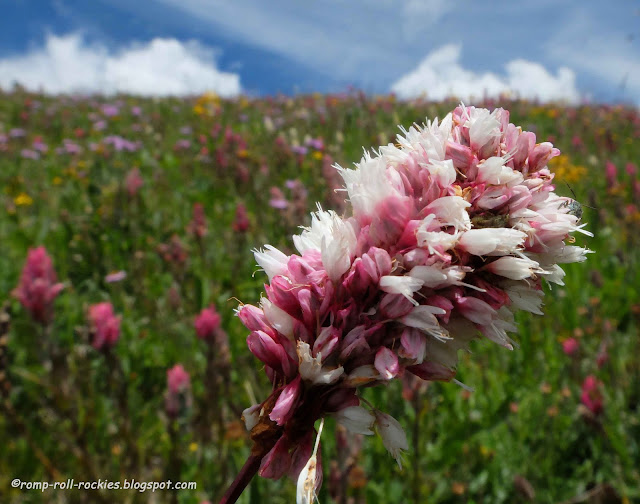 They were the best I've seen this year. 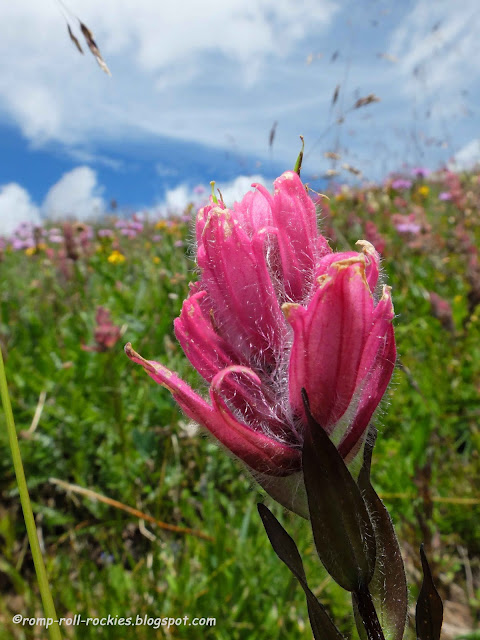 Alas, even though I was keeping my promise not to look back toward my starting point, I still worried about the storms behind me. And, I knew that I still had thousands of feet of climbing before I made it to our campsite.

So, I tore myself away from the flowers and continued the hard work of pedaling. The next section of trail was in the subalpine forest, with numerous creek crossings and technical trail. I plugged away, and I eventually emerged to this brand new view! I knew that I was almost "home" when I saw this. 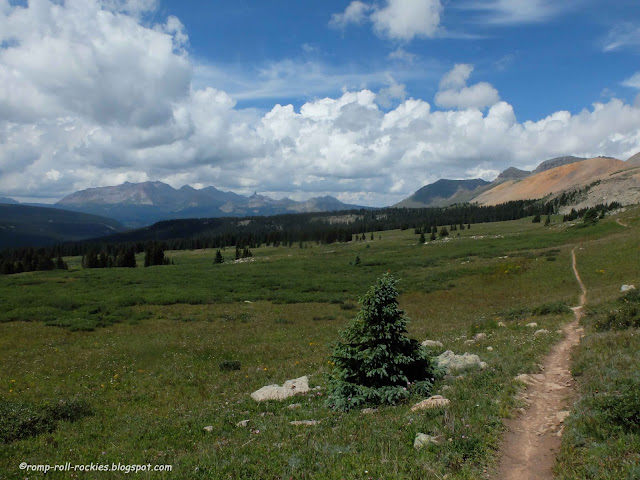 I had paced myself reasonably well so the gargantuan steep climb up to our campsite didn't floor me like it has in the past. Indeed, I felt like I could've ridden further. That was a nice feeling for this old girl.

I pulled into camp to hear the excited welcome barks of our pups. I was so glad to see the entire pack, all safe and sound. Moreover, our campsite, bar none, has the best view of any I've ever stayed in. 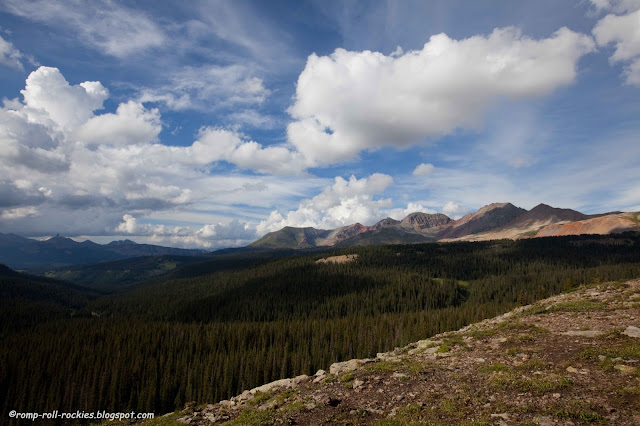 So, I'd beaten the storms, which never exploded with their full fury that day. After arriving, I was able to laze around in the intermittent sun with the pack. I'd say that was an amazingly good day!

To top it off, the sunset left me speechless. This was one view of it... and I'll save the others for another post! 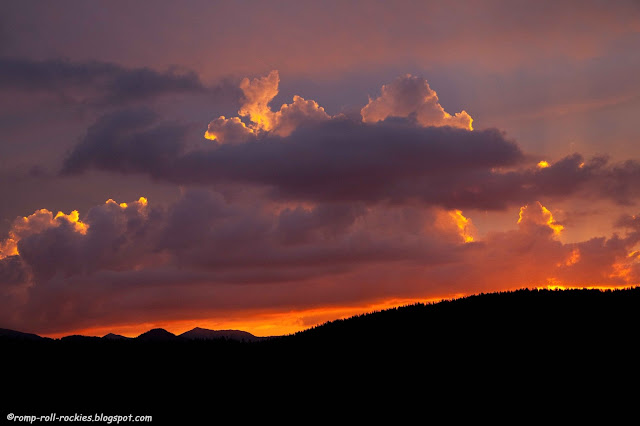 I learned that day that sometimes it's really worth pushing through your worries and going for it. I had one of my most memorable days of the summer because I found the courage to face what scared me.

PS Tomorrow is the last day to vote in the Trail Camera photo contest that I've entered. If you're interested, there is more info about my entry and how to vote in the last paragraph of a recent post. I am so grateful for your support!!!!
Posted by KB at 6:55 PM