After some nice weather at the start of our vacation, it became tumultuous. Normally, in the high mountains, there's a clear and sunny time every morning, and then threats of thunderstorms in the afternoon. That's easy to deal with - because we simply plan our fun in the mountains for the mornings. Near the middle of our vacation, the pattern changed, and the thunderstorms started very early. We saw almost no sun on those days.

When you're on exposed alpine ridges, thunderstorms are dangerous, to put it mildly, so our plans were derailed.

We camped near an enticing trailhead for two days. It leads to a high and exposed ridge that is said to have "cascading wildflowers". Everyone says that the area is gorgeous, and we've wanted to visit it for years. It even looks gorgeous in the rain. 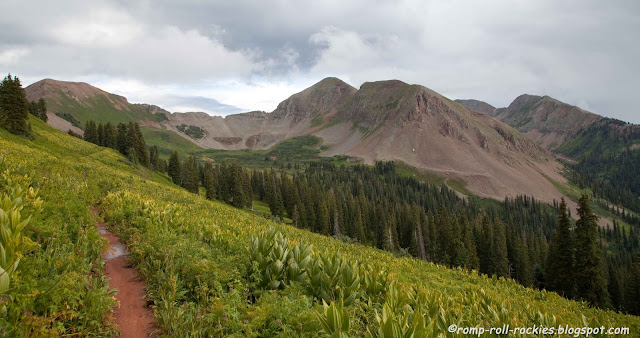 On our first day there, we made it to a lake below the ridge before the skies opened. 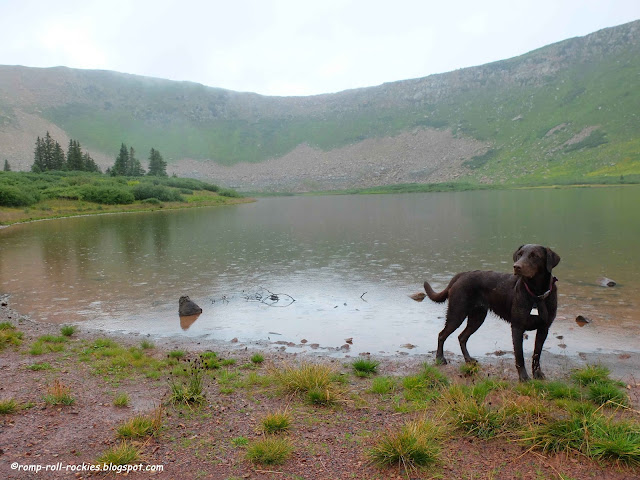 A gentle rain rapidly became pelting hail, complete with thunder boomers. We sprinted back to camp and spent the majority of the day staying warm and safe in the LabMobile. At least the view was nice... 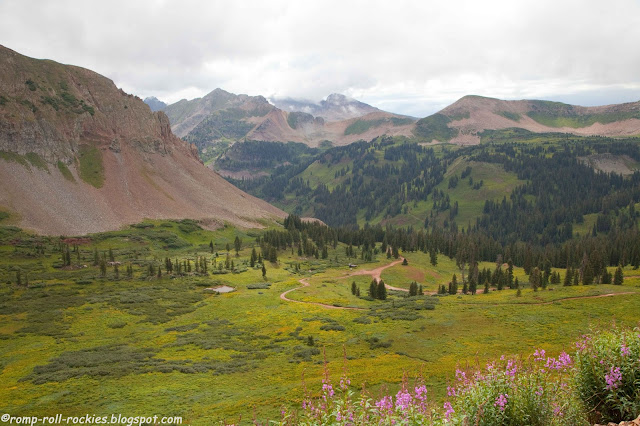 The next day was similar. I was going stir crazy from sitting in the LabMobile, and there was a brief break in the weather. Shyla and I headed out for a bike ride, never going too far from camp. 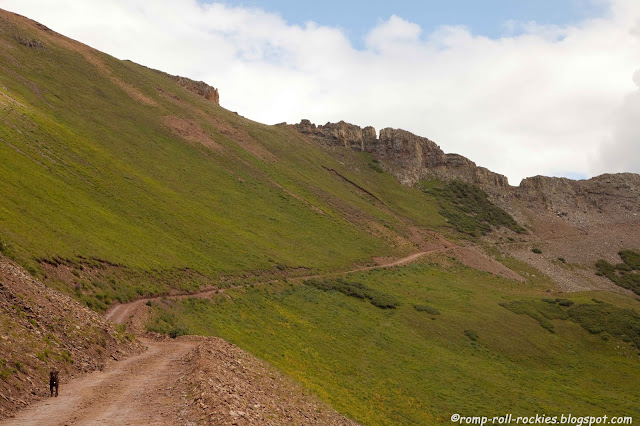 On one foray, we climbed up the road in the photo above, and the sun shined when we made it to the top! 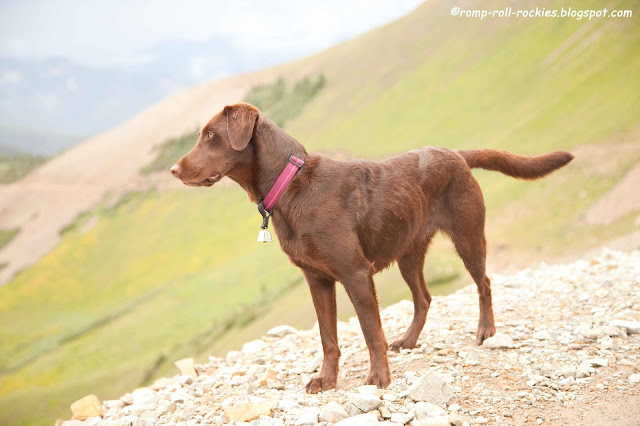 The road went through a notch in the rock cliff. 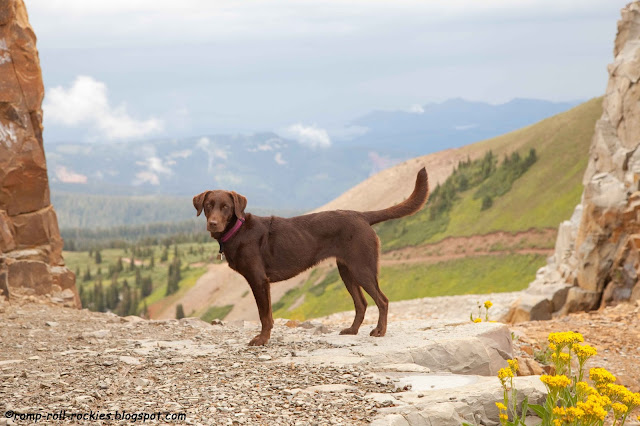 On the other side, there was a ledge... but the drop-off was very mild (don't worry about Shyla in this photo!). 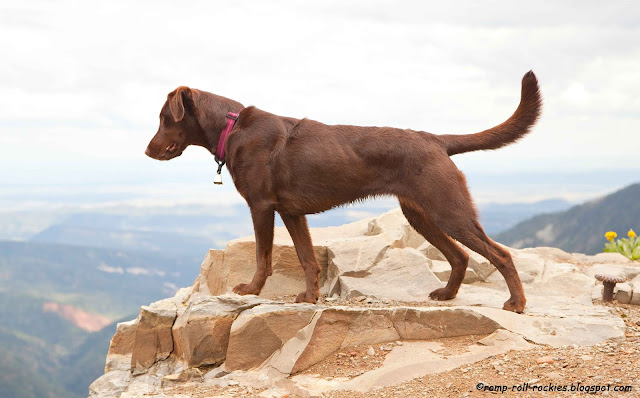 The weather was seeming so good that I decided to start heading toward that ridge of "cascading wildflowers" again. This was the pretty trail we followed. 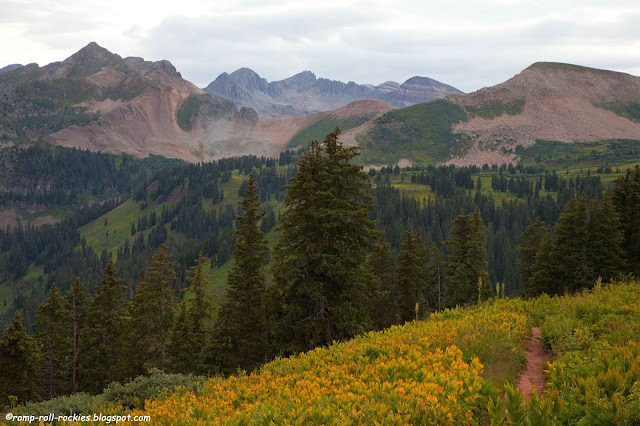 Alas, it was not to be. Within 10 minutes of starting the trail, it was hailing on us again, and we were sprinting back to camp to avoid being out in lightning.

Of course, just to drive us insane, the sun shined ever so briefly again just after our arrival in camp, tempting me to try for the ridge yet again. But we didn't. 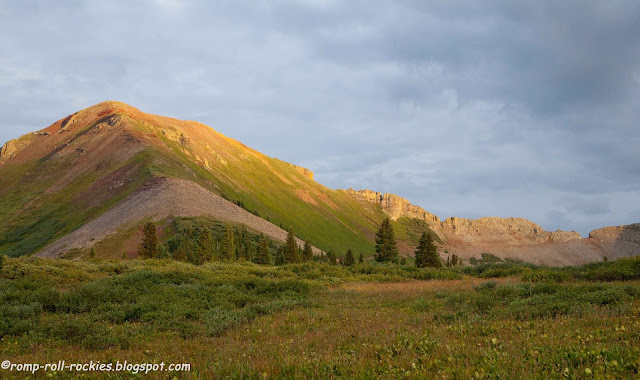 We did have a family of marmots to amuse us as we hung around near this trailhead. They lived in an abandoned mine. You can see that the right-most one was a lactating female. We didn't see the babies.

Before the end of that day, we decided that it was time to give up and move on. Maybe we'll see the "cascading wildflowers" next year. We moved onto another site, where even more "excitement" awaited us. The middle of this vacation was not stress-free. That's for sure! 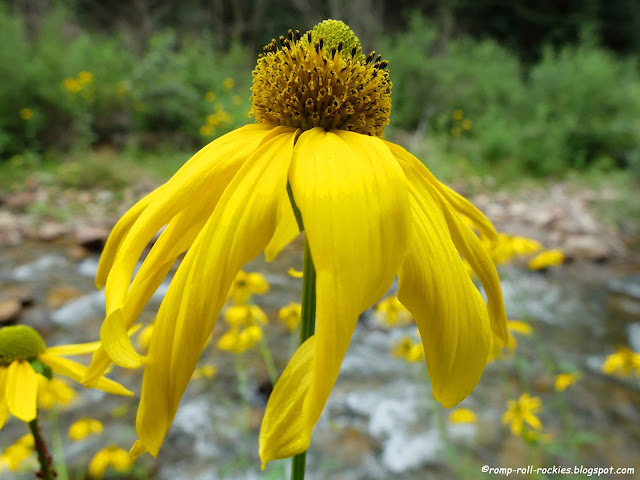 At least we had beauty all around us during this part of our trip!
Posted by KB at 6:33 PM