Today was snow play day. Off-trail, the snow was deep. Shyla porpoised through it. 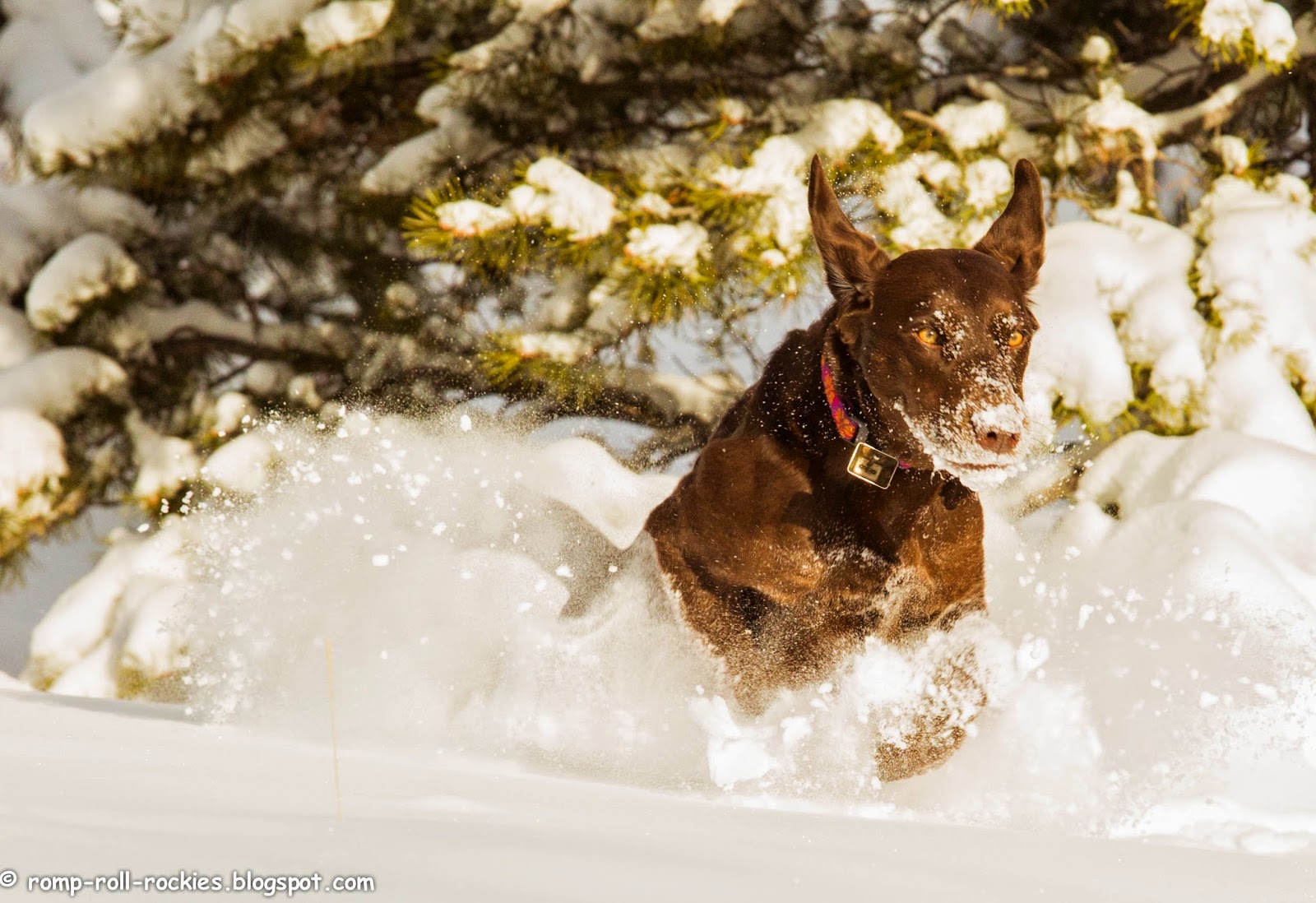 Her face was perpetually covered in snow. 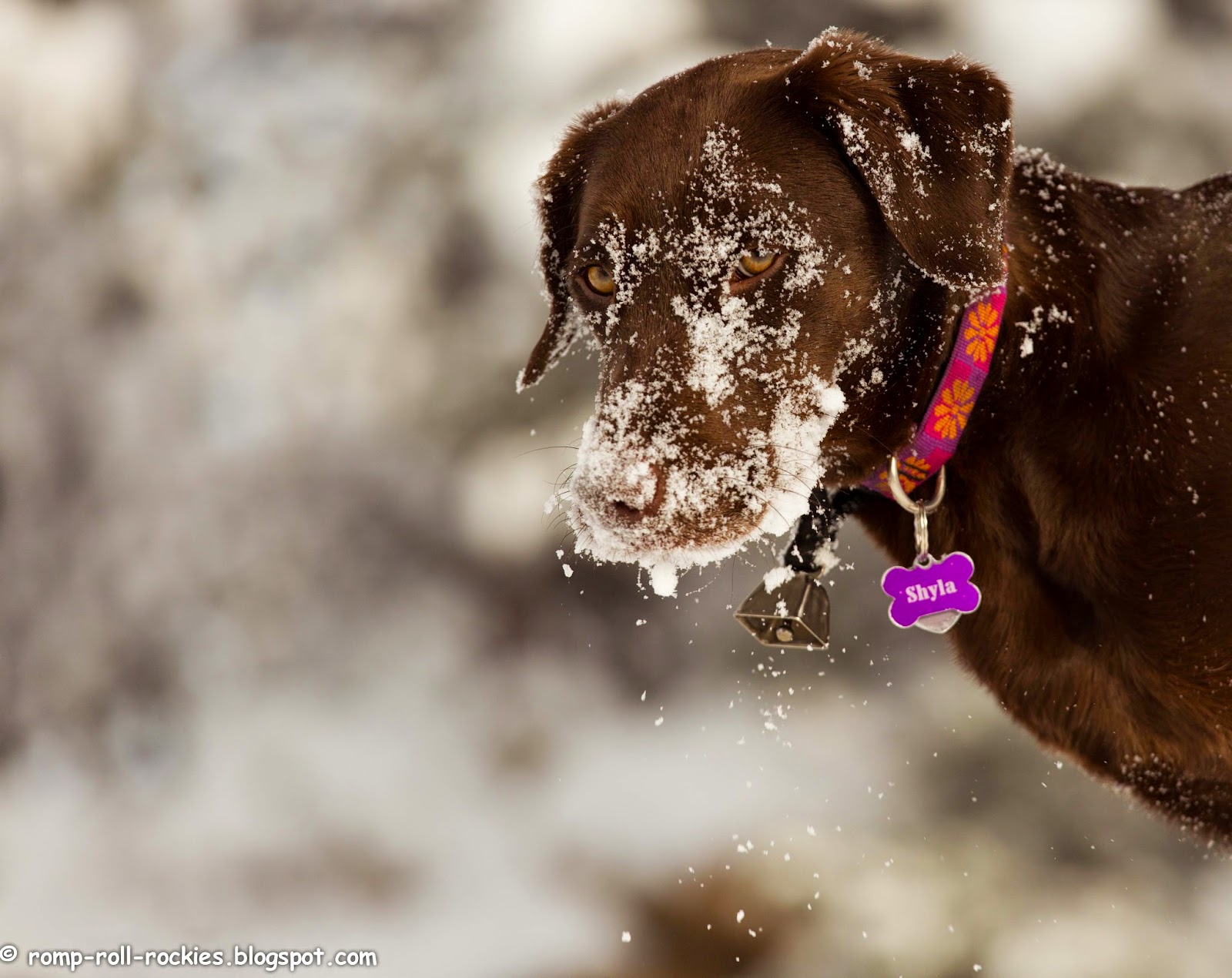 But it didn't seem to bother her much. She scented for animals as if she wasn't covered in snow. I think that, in the next photo, she had caught the scent of the moose that we would see soon thereafter. 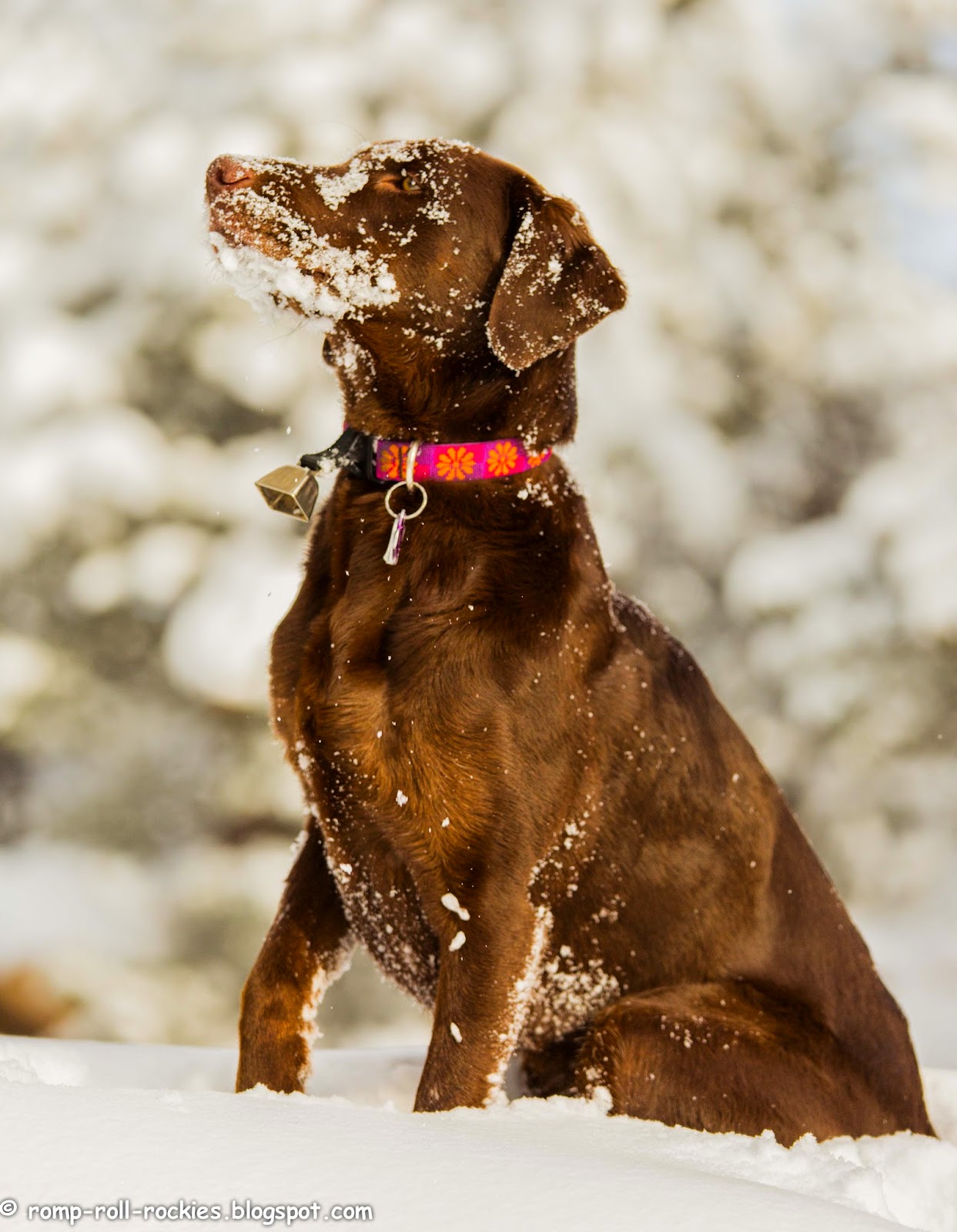 As I tried to ride my snow bike, flailing around like a rookie, Shyla ran with power and grace. 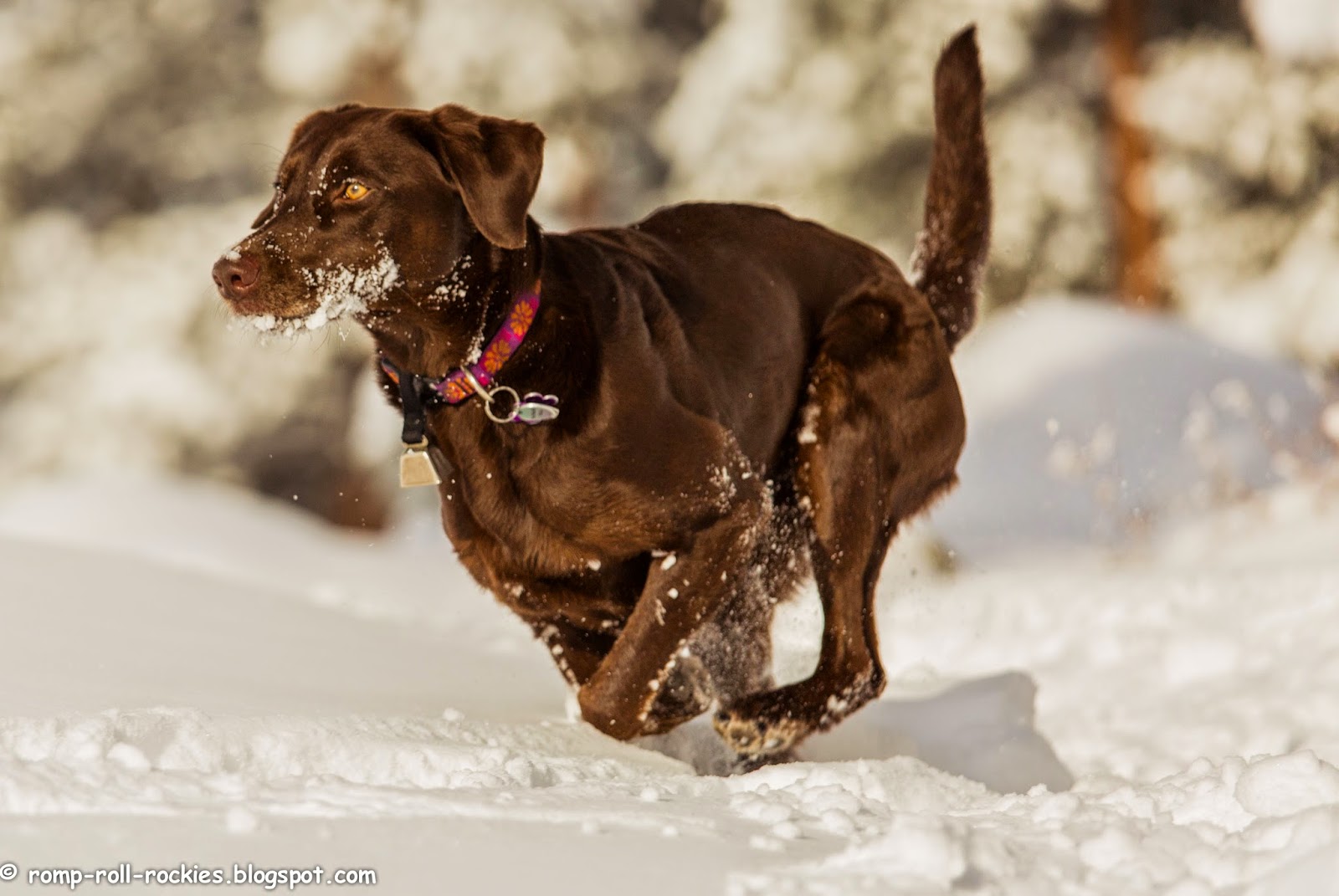 At three years old, she is at her prime, and she reminded me of that fact repeatedly today. She was like a perpetual motion machine, not slowed by the deep powder just off to the sides of our trails. 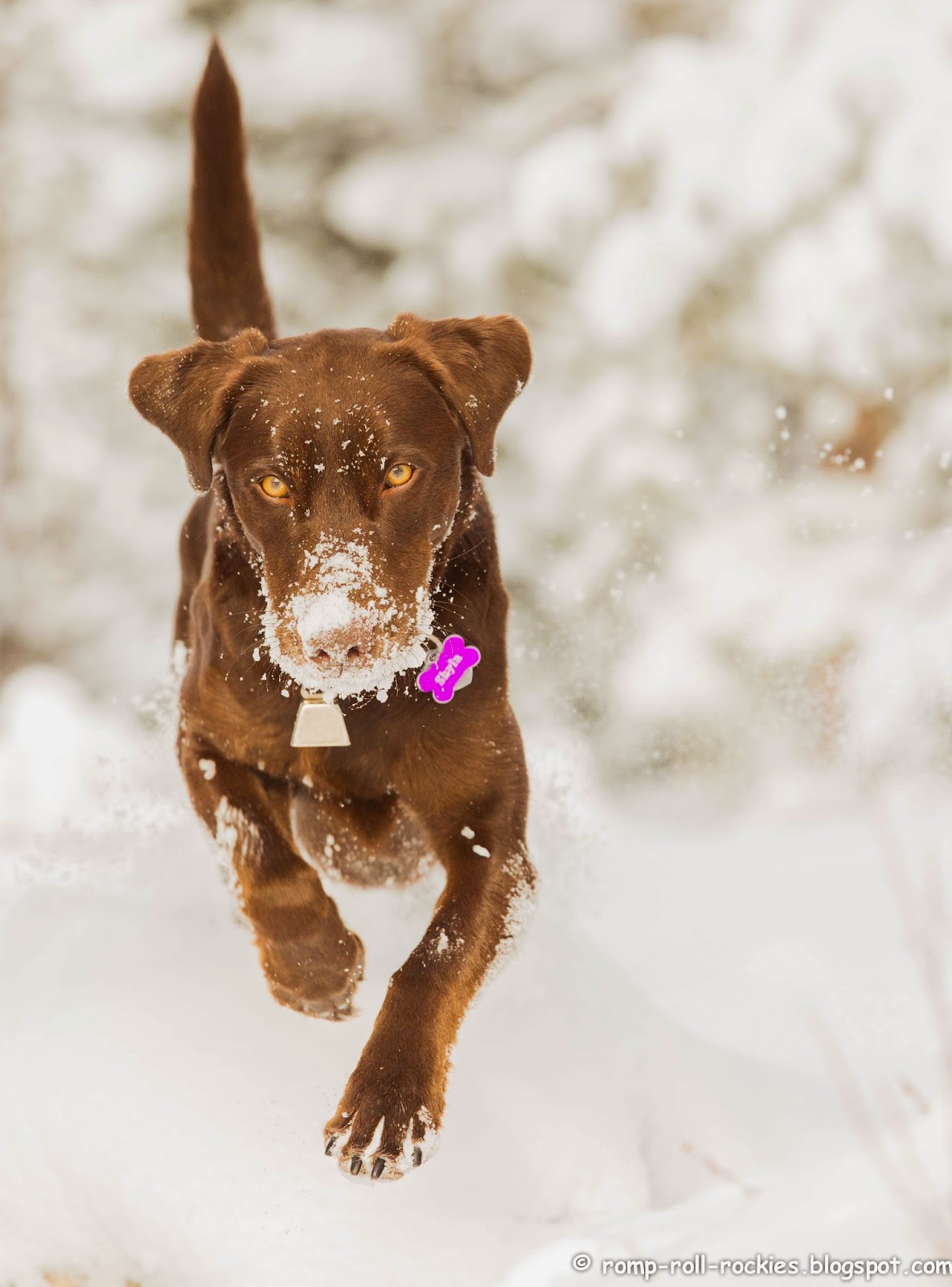 But she stopped occasionally, when I asked her to. The winter world was gloriously beautiful so I asked her to stand in K's spot, atop a boulder with the mountains barely visible behind her. 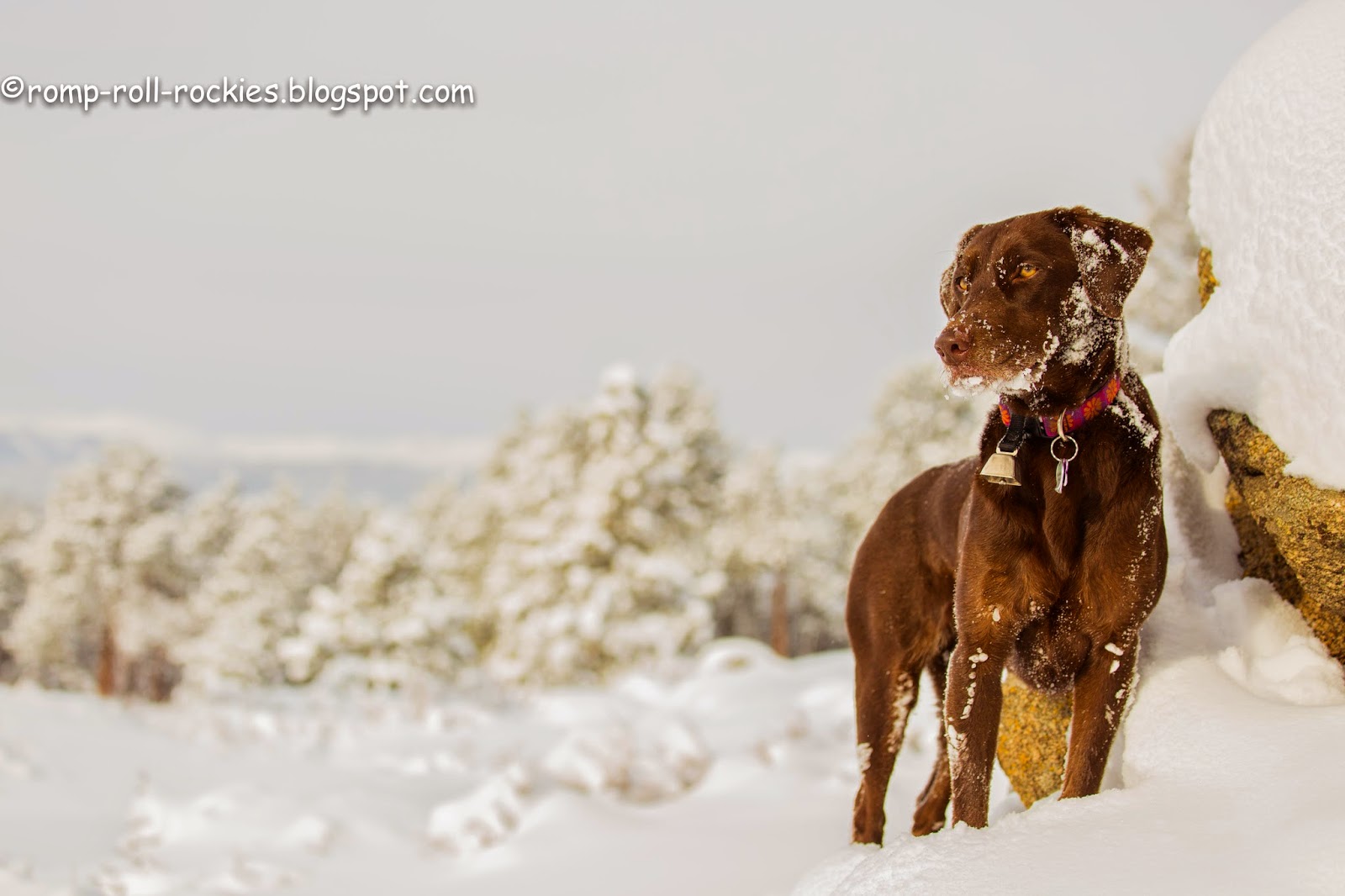 After our play, we got down to the business of packing down some more trail with my snow bike. Shyla stayed nearby, thank goodness, because we spotted a mother moose and calf pair.

When we first saw them, they were running very fast through the deep snow from a lower meadow up to the one where we were. They crossed our trail about 50 yards ahead of us and continued up the hill at an incredible speed considering the slope and the snow conditions.

I feel fortunate that Shyla has zero interest in going near them. She stayed right next to me as we watched them climb the hill and then disappear over a small ridge. I suspect that someone in the lower meadow had scared them, sending them sprinting up the hill.

It seems that having moose in our neck of the woods is becoming the new normal. Based on the tracks I've seen, they've been in the midst of our trail system almost every day since I was charged by a different mother moose.

Intriguingly, as the locals are learning how to live with almost daily moose encounters in the forest, an article about the moose population explosion in our state came out today. The astronomical increase in moose activity in our "backyard" is happening all over the Front Range.

Let's hope that the moose, the people, and their dogs reach an equilibrium so that no one gets hurt.
Posted by KB at 6:51 PM