Moose on the Loose

I haven't talked about moose in our forest very much recently, although they've still been in the vicinity. A couple of weeks ago, Shyla and I saw a young bull moose, all by himself. Shyla did a sit-stay next to me, and I snapped a photo as he disappeared into the forest. 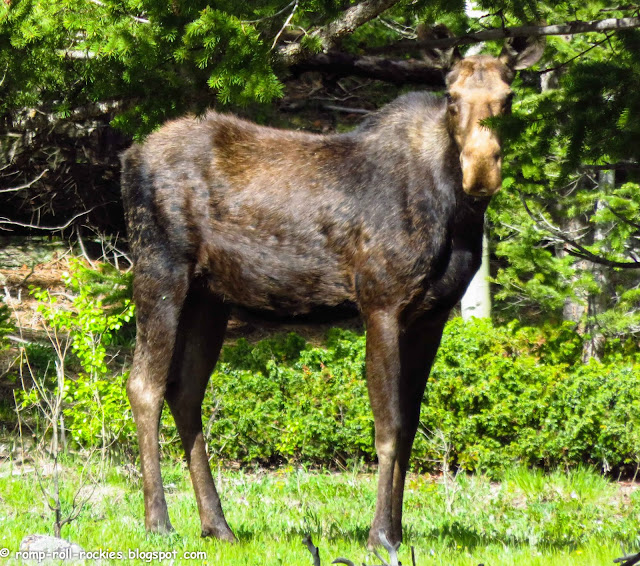 I'd heard that others had been seeing new moose calves all over our area so I guessed that this was last year's calf who had been hanging out in our forest for the winter. I suspected that his mother had split from him to have a new calf.

Here are a couple of photos of him with his mother last winter. He was the closer of the two moose in the photo. 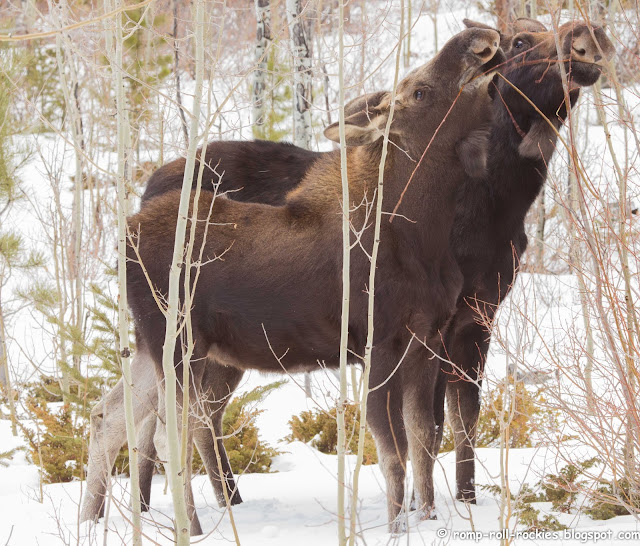 He and his mom usually foraged right next to each other. 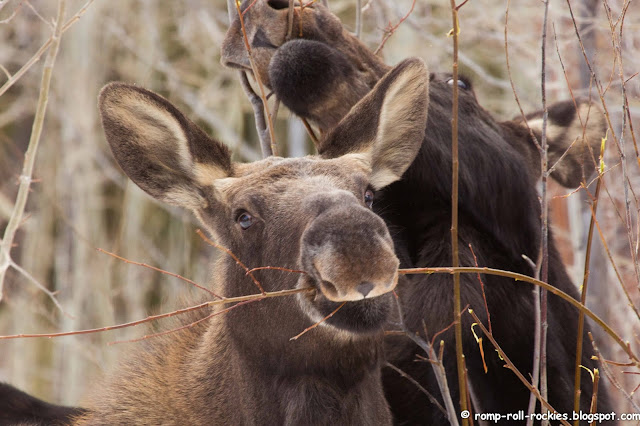 I saw them together, one last time, near the end of the winter. You can see the calf's antler buds just above his eyes. 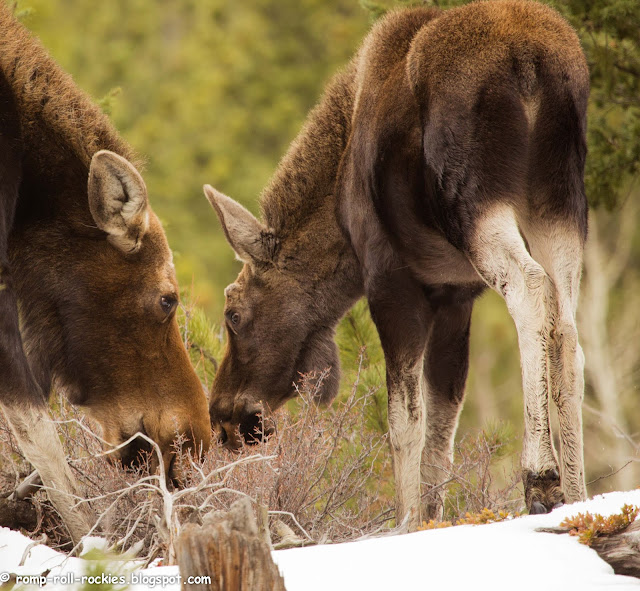 Then, I didn't see any moose for a while, until a trail camera picked up photos of a young male moose by himself. He sniffed the ground in front of the camera. It's a spot that mountain lions have marked many times. 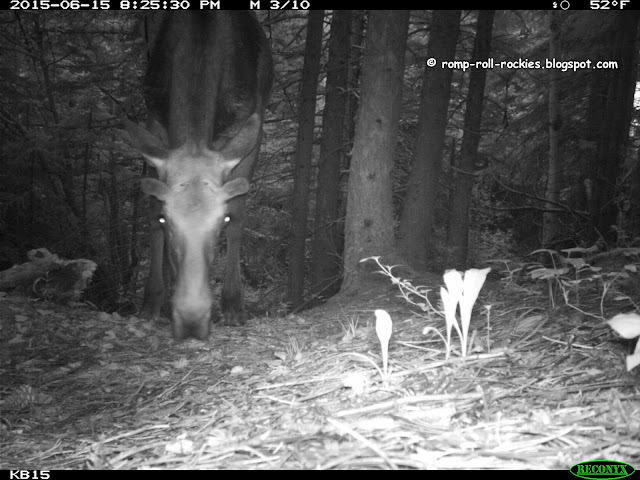 He was so engrossed in the scent that he knelt down to smell it better. You can see his velvet antler buds in both photos. 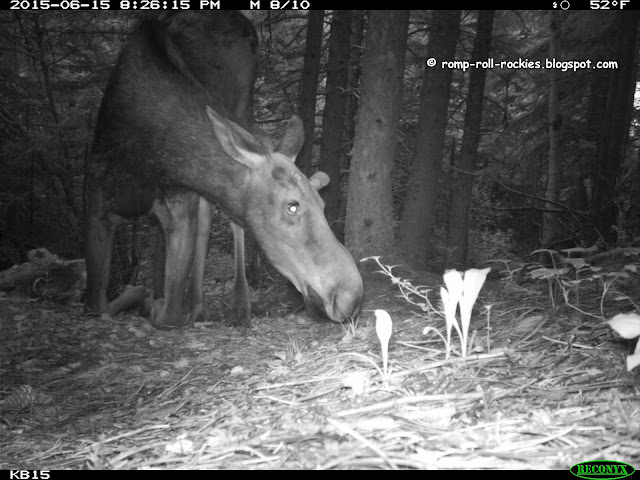 He spent a few minutes in front of that trail camera before going on his way, probably starting the process of finding his own home range, away from his mom.

Then, I heard from my neighbor that she'd seen a baby moose with a mother moose just outside her house. This is her photo, that she kindly gave me permission to share with you. 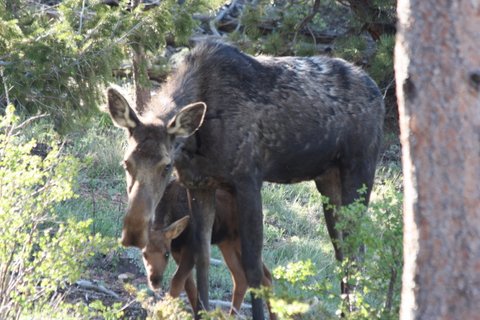 You can see in that photo how protective the mother moose looked. To be honest, seeing this scared me. I was worried about meeting this pair on the trails while I rode with Shyla. It finally happened the other day. Fortunately, they weren't right on the trail but about 30 yards off of it.

I spotted them, hopped off my bike, and told Shyla to do a "sit-stay". It was one of those moments as a dog guardian that I was SO thankful that I spend so much time training Shyla. She did exactly as I asked. I leashed her. I snapped a quick photo, and then we moved further away from the pair, giving them an extremely wide berth.

It was during that encounter that I captured the photo that I showed you yesterday. 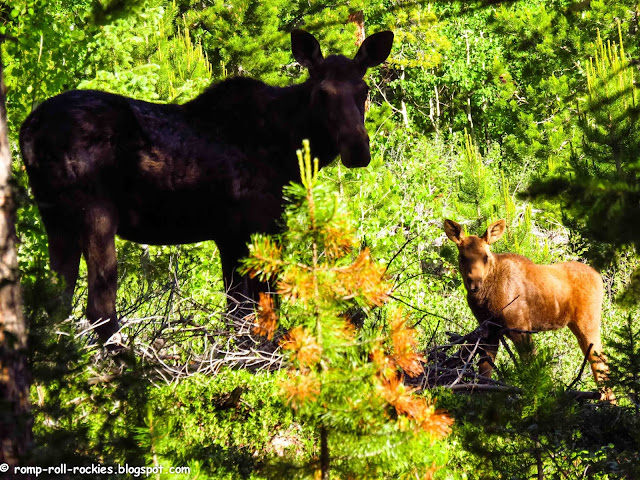 It was incredible to get to see the pair, although I hope that it doesn't happen too often. Moose scare me more than any other animals in our forest.

It was also one of those moments that I realized that Shyla has become a true partner with me. We can do amazingly fun stuff together, and I can trust her to follow my instructions. In this case, our safety was on the line, and she passed the test with flying colors! 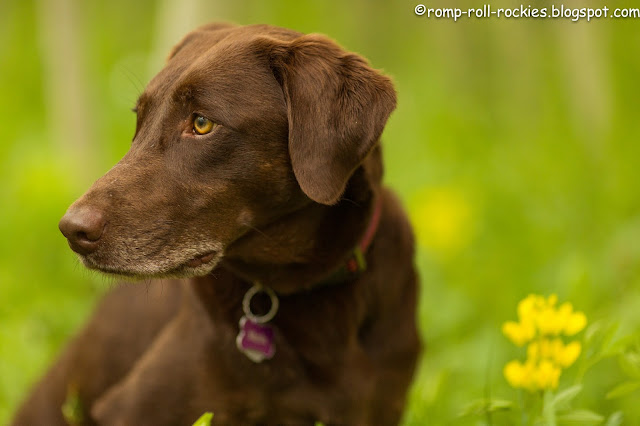 Every single day, we practice "stays", "recalls", and other basic trail safety cues. Indeed, I take many of the photos that I show here while we practice. For photos, I often put Shyla in a "stay" and then I either call her to me or direct her to run to some other target. 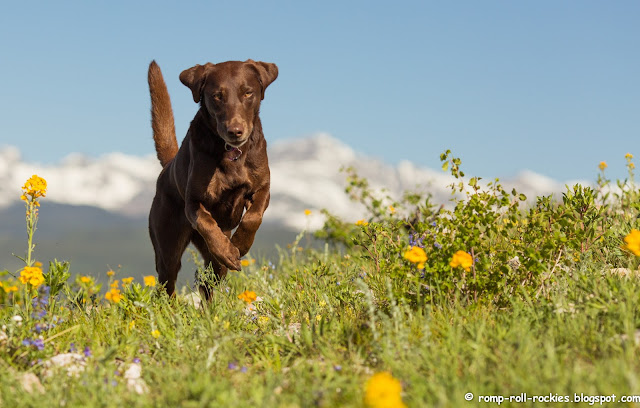 All that practice has been worth it - especially if it means that we can peacefully coexist with the potentially dangerous wildlife in our forests! And, our shared experience with the moose further strengthened our bond. I love Shyla more and more every day.
Posted by KB at 7:40 PM