During our trips in the high mountains, the Runner encourages me to do point-to-point rides. He drives the LabMobile around the mountains that I ride over on my bike to meet me.

We've had some epic disasters but 2 out of three of my point-to-point rides went well this year. That third one was a doozy but I'll save that story for later.

After our LabMobile was fixed much faster than we expected, we decided to make the whole drive out to the San Juan Mountains that day. It was a loooong drive, with my sciatic nerve hurting like a bolt of lightning was sizzling down the back of my leg.

We reached Ouray as it got dark, and, after we got out of town, we decided to find a place to camp ASAP. The cool thing about the San Juan Mountains is that open space abounds. There are innumerable mining roads leaving the main road, and most of them are empty. We found one, drove about a quarter mile down it, and we parked the LabMobile in the dark.

After arriving, I fiddled with my camera a bit, trying to capture more shooting star images, and then we went to sleep. It turned out that I did capture a shooting star (near the middle of the photo) along with the Milky Way. You can see the silhouette of the mine building in the lower right of the photo. 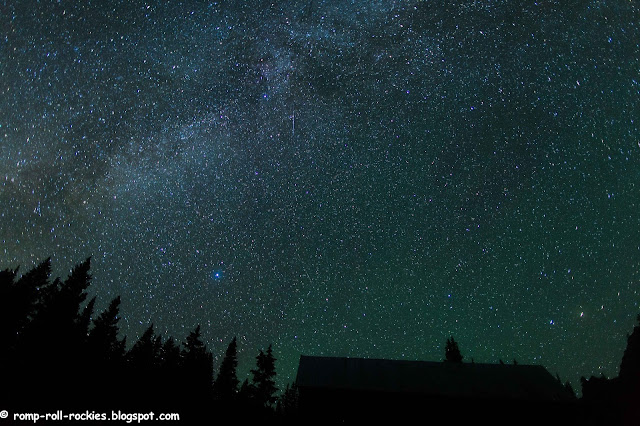 We woke up the next morning to find that we'd parked next to a mine that had once been a bustling workplace and then had been abandoned after the mine stopped producing. Below the mine and the LabMobile, streams poured downhill, draining the mine area. We were leery of the water, after the Animas River disaster earlier that week. There are mines all over Colorado that are slowly leaking out poisonous mining by-products. 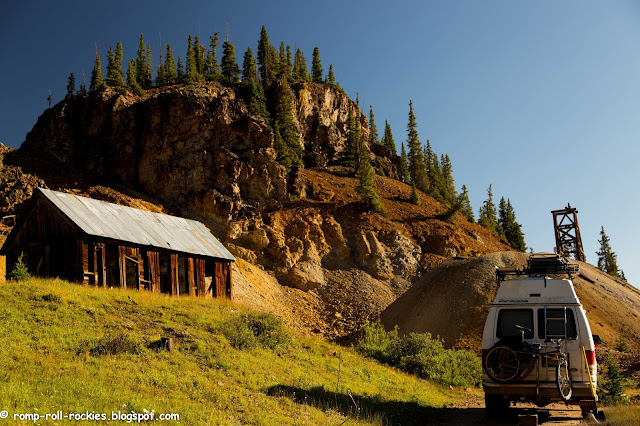 We knew where we wanted to go next... but it usually involves a long point-to-point ride for me and a long bumpy LabMobile ride for the Runner. I hesitated because I felt tired and had a headache that felt like it might be the start of a migraine. However, in the end, I decided to "go for it" (with migraine medicine on-board) because I always count the day that I do that alpine ride as one of the best of the year. It's so beautiful.

We drove to the trailhead, and I bid the pack adieu, promising to meet them 25 miles (and many vertical feet) to the southwest. After I started my solo journey, I quickly remembered why I love that particular ride so much. The gorgeous views are endless. 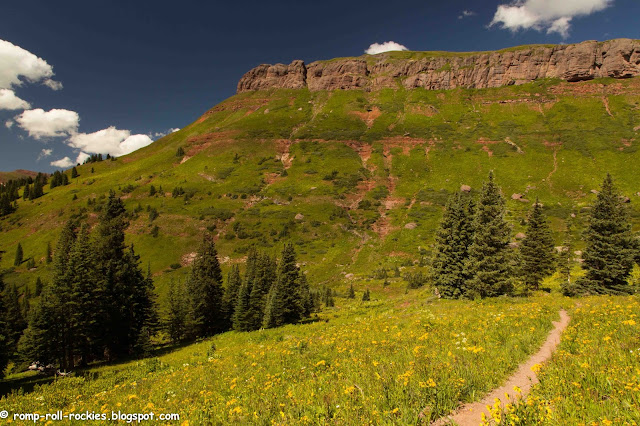 And when I emerged above treeline after a very long climb, the flowers stunned me. 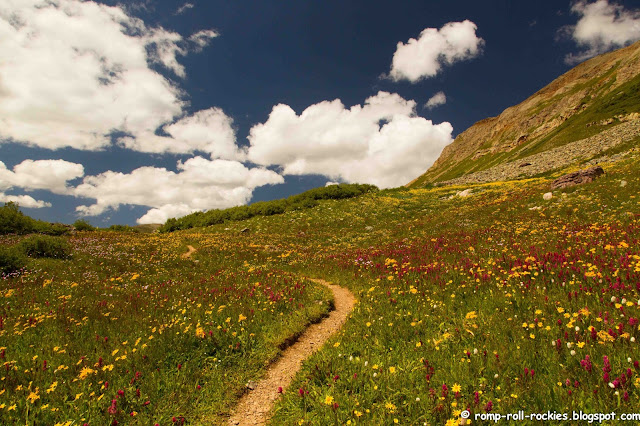 The ride has a long section above treeline so I was fortunate that there was almost no chance of thunderstorms. I could enjoy the beauty without any worry about lightning. 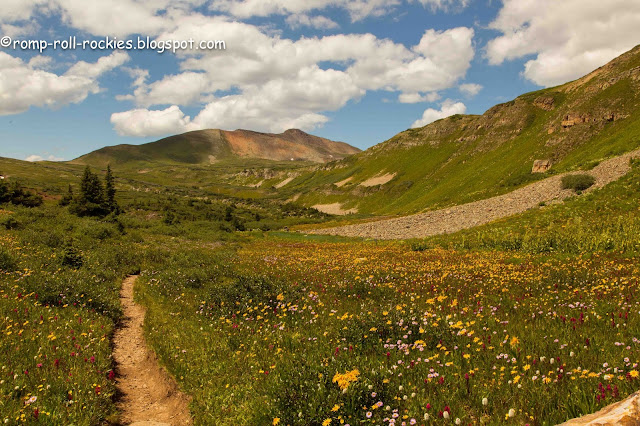 The ride climbs up to a tall pass (~13,000') at the middle of the journey. Near that point, I realized that I was exceptionally tired, and I was only halfway to my destination. I had that "empty" feeling in my legs like I couldn't produce much power when I pedaled.

I took a break to eat and drink, and I hoped that my flagging energy would come back. My rest spot certainly had a gorgeous view. 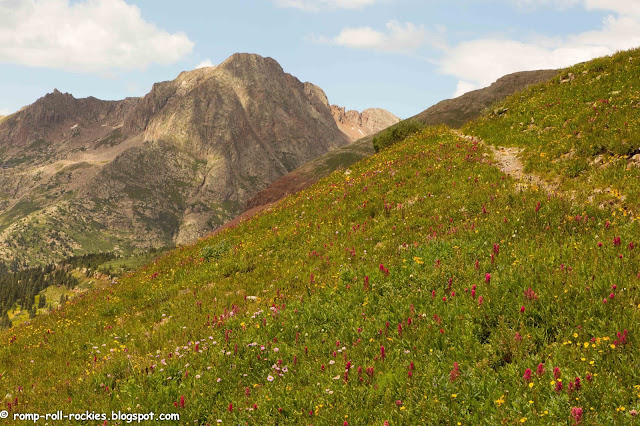 As I sat there, I noticed Columbines blooming in the midst of the many Paintbrush flowers. Photographing them was fun because our local Columbines had stopped blooming weeks earlier. 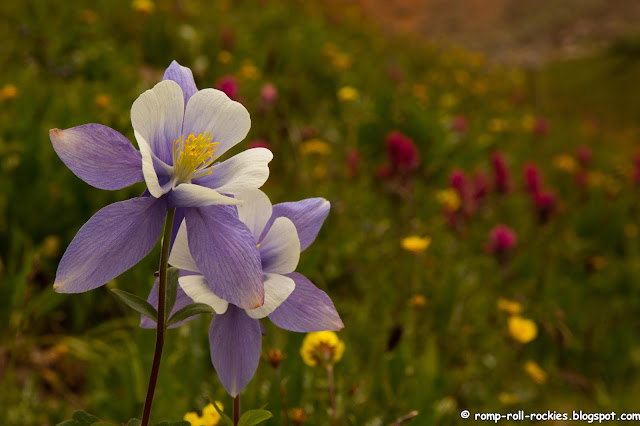 To be honest, my energy never really returned and my headache got worse. The second half of the ride was very hard, as I struggled to pedal through terrain that normally would be easy. 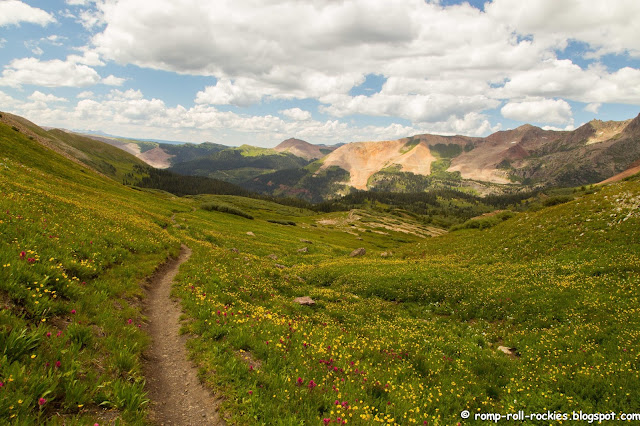 As I crested the last ridge before our usual campsite, I received a text on my Delorme satellite messenger from the Runner saying that our campsite was a mile further along the route than usual. I almost had a meltdown. Another mile seemed like an eternity with my body as tired as it was.

I knew I had to ride this long straight trail slightly downhill for a few miles, and then I'd have a steep climb up the campsite. After I took the next photo, I didn't take my camera out again. I just put my head down and doggedly pedaled toward our campsite. 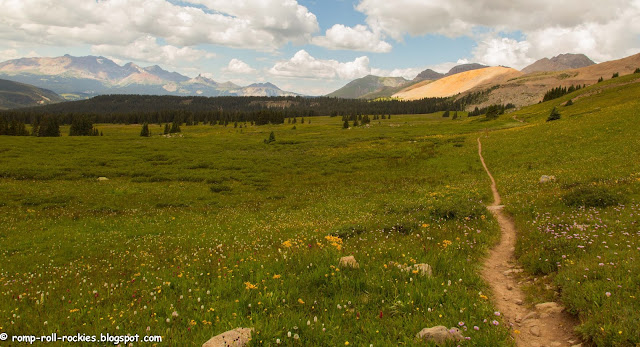 I was a basket case when I arrived in camp. I ate everything in sight and then I finally got out of my sweaty biking clothes. It had been such a long day. Usually, this ride isn't so hard for me. I can only guess that the stress of the previous day's drive plus my headache had taken more out of me than I expected.

We took a very short little evening hike, and I even got a golden sunset photo of my sweet girl. I slept well that night! 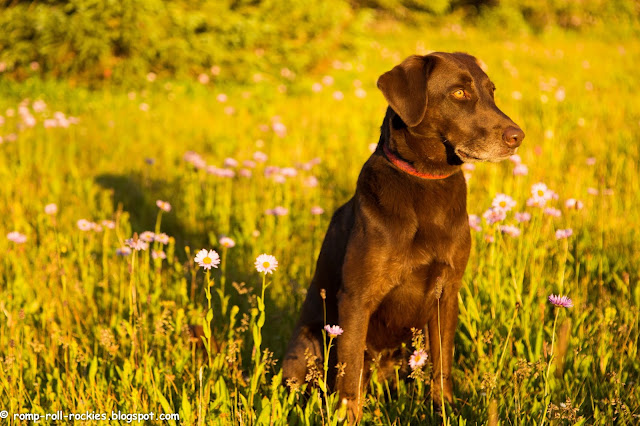 All in all, it was a day to remember... although the memory of the fatigue is already fading. The memory of the incredible wildflowers will never fade.
Posted by KB at 5:32 PM