This week was so much better for Hachi. We've returned to a routine that he knows and is comfortable with. We met with his behavioral vet. Over the next few weeks, we'll slowly adjust his meds - adding another short acting anti-anxiety drug and increasing his Prozac.

To be perfectly honest, I am getting a little tired of the "slow and gradual" approach but I understand why we must do it. Any drug that affects his brain can have paradoxical effects that are the opposite of what we are aiming for. So, slow and steady is the safest approach. I am trying to remain patient.

From when we first met Hachi, he's been leery of water. That's the complete opposite of our Labs who adore swimming like nothing else. During the first swimming outing that Hachi participated in, he got very carried away with the Labraduo's enthusiasm for leaping into the water. As Shyla took a leap, Hachi momentarily lost his mind and followed her. 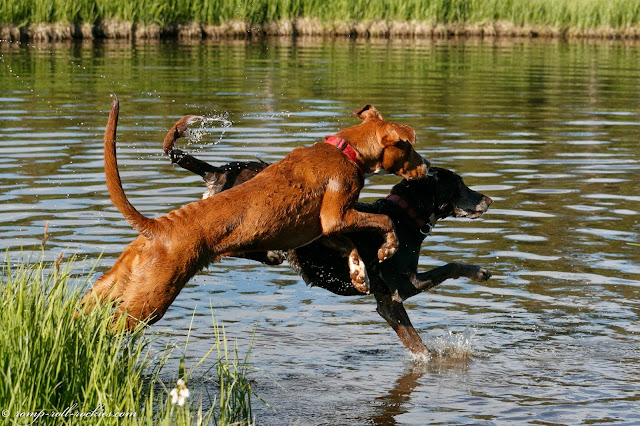 He did an amazingly high leap. 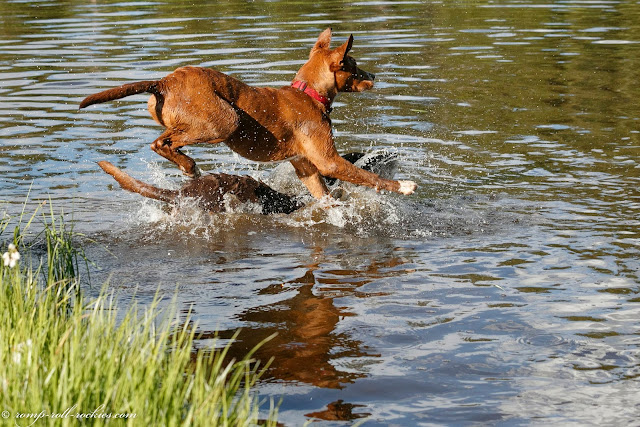 He landed in the water, and he swam back to shore with Shyla watching over him. He swam more smoothly than any of our previous puppies on their first swims. 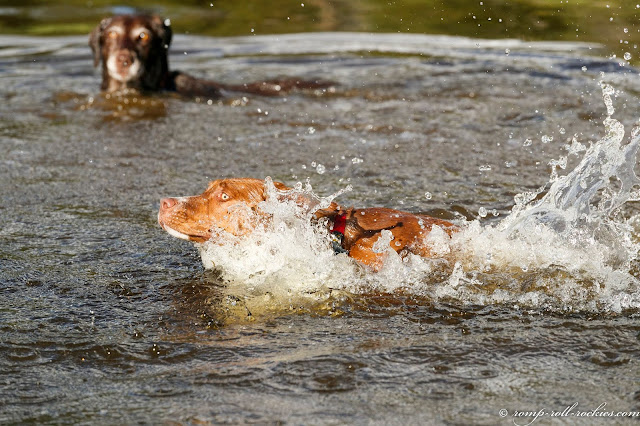 The problem was that he scared himself badly. The water must have totally shocked him. After that, he was terrified of the water. He never jumped into the water, swam, or even waded again all summer long! I feel badly for the little guy - he is so prone to fear that he can cannot enjoy a cool swim.

I've become completely convinced that 99% of his issues are caused by fear. He is afraid of so many things - and he often deals with his fear by behaving aggressively toward the Duo. We saw many examples of that while we were in the high mountains. If, for example, a stranger went by us who behaved in a way that scared Hachi, he responded with a cheap snarl at one of the other dogs. Seeing that time and time again told me that addressing his fears may solve his other issues.

I really hope that we can help him with his fear.
Posted by KB at 4:00 AM