Yesterday evening, R and I witnessed a winter sunset. A thick blanket of winter storm clouds covered the mountains of the Continental Divide. 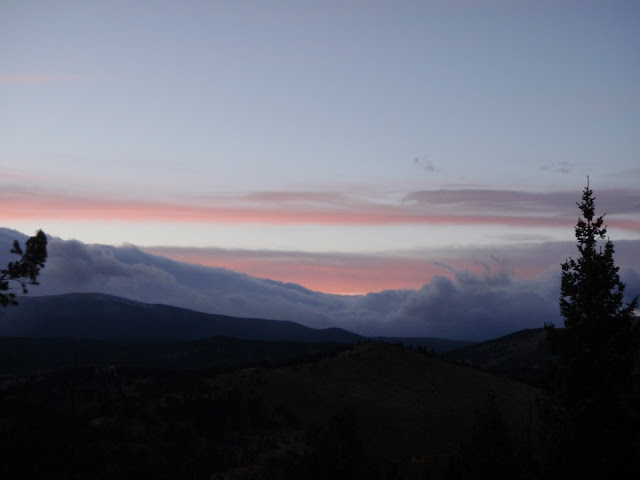 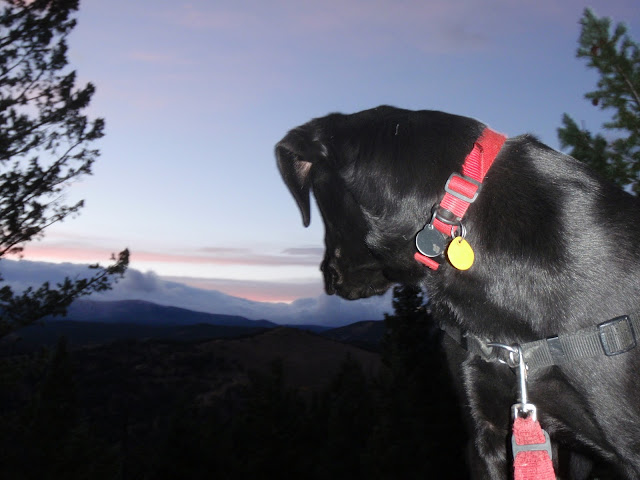 Meanwhile, K relaxed at home after her short walk. She seemed to be resigned to her new sedentary lifestyle, mixing rest and brain games. 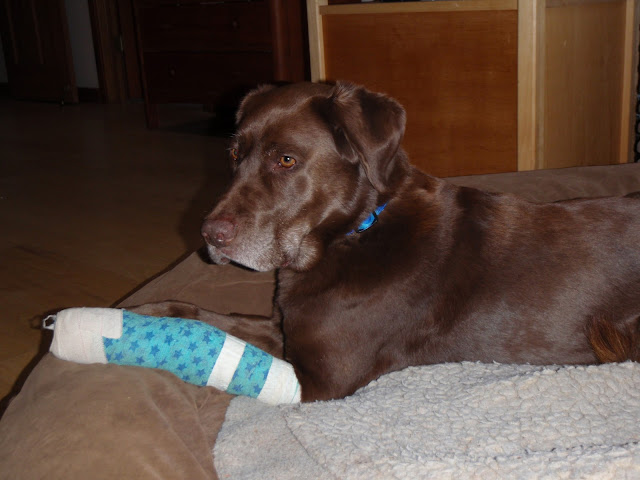 Then, this morning, K read over my shoulder about Rusty the Rooster trying to one-up her and R by standing triumphantly on a boulder. When we headed out for our little walkabout, she contemplated his challenge and how to meet it despite the cast on her leg. 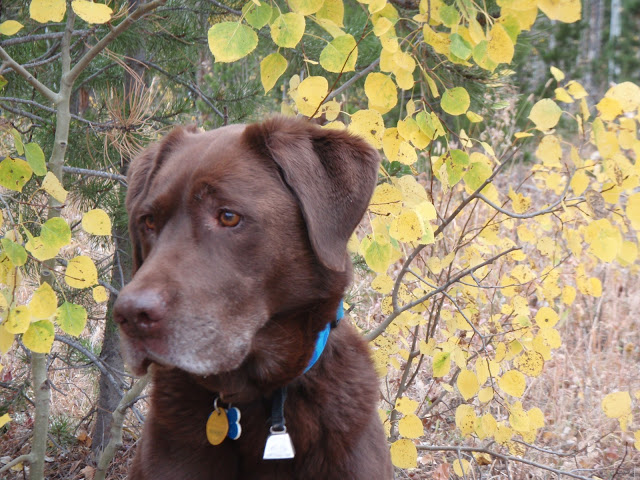 Then, she promised to be very careful as she climbed onto a small boulder. 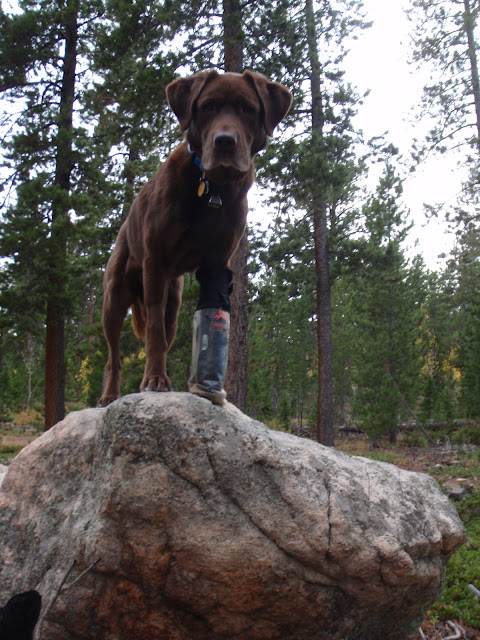 Without asking me, she upped the ante, standing with her forepaws and hindpaws each on separate rocks. Try that Rusty! 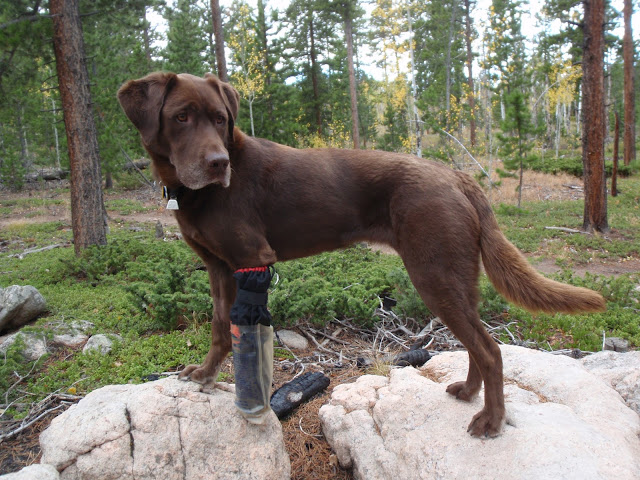 After K was resting at home content with a frozen kong, R joined me for a short mountain bike ride. The air was damp and cold. It felt like snow could fly at any moment. When we arrived up high at Hug Hill, R zoomed like a guided missile to the juniper bush where a chipmunk likes to hide. Alas, no chipmunk lurked there today. I think that he started his hibernation, R - look at the snow up just a little higher than us. It’s time for a long sleep for some animals (including the bears who might be sleeping at the den where I have a trail camera). 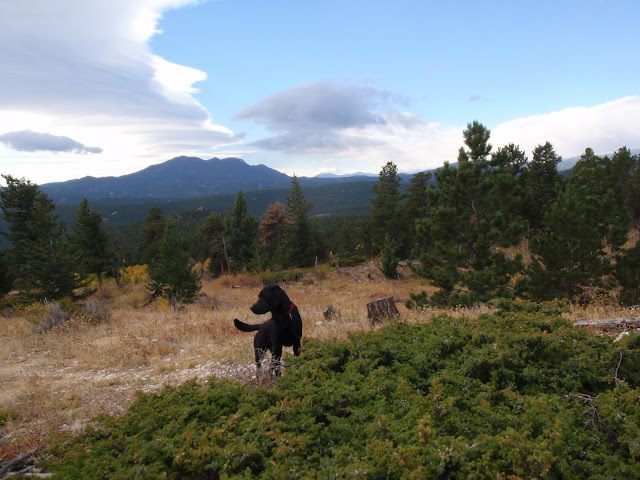 One of the cardinal rules for using behavioral training to overcome R’s obsessive-compulsive disorder is to spread out his obsessions among many different activities. One suggestion was to allow him to become rodent-obsessed. I’ve nixed that idea – R is already so obsessed with rodents that I’m having trouble with him on the agility course. If he scents a rodent, we’re done with agility training because he becomes completely focused on the rodent. The other big rule is never to castigate R for following an obsession. I’m told that scolding him will make him even more obsessed. So, as he goes nutso over rodents and forgets that I exist, I have to look for creative ways to distract him – like running away from him while acting like a lunatic. That worked this morning but probably won’t again… He's too smart!
Here was the mountain view from Hug Hill - most definitely a winter look. We climbed this mountain during a warm summer day. I think that it's arctic up there now! I can't wait until the clouds finally lift and we can see the snow-covered mountains in the sunlight! 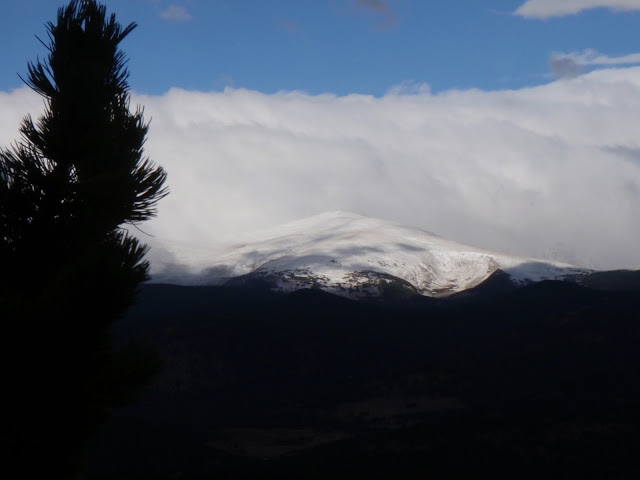 The feeling of snow in the air brought many locals out onto the trails, feverishly squeezing in some more outdoor time before true winter sets in. I met several fun friends on the trails today, and one even showed me a new trail that included this view. Woo hoo! 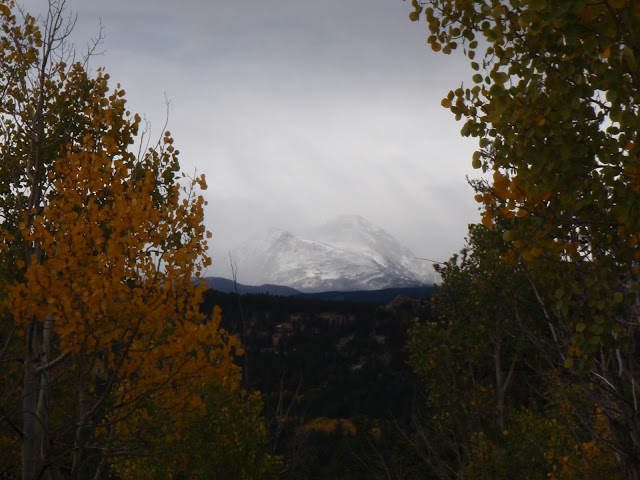 I was planning to visit some new blogs today of the many kind people who commented on this blog over the past few days. Alas, our internet connection is crawling today. It took four hours to upload the photos in this post! Every time I tried to open a new blog, all progress on uploading the photos stopped. So, I’m saving my blog visiting for a day when our connection is a tiny bit faster! But, thanks to all of you for lifting my spirits!
Posted by KB at 7:30 PM