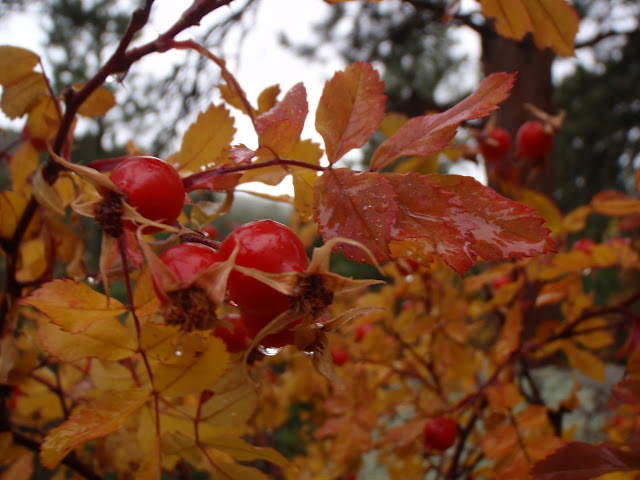 This morning, K and I walked into a wet forest with the sounds of rifle shots echoing off the canyon walls nearby. We both wore blaze orange - I looked like the Great Pumpkin while K looked much more stylish in her orange bandanna. 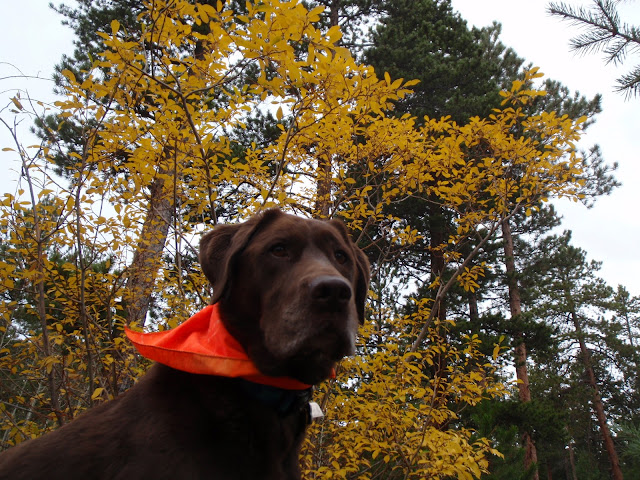 Most years, K quickly gets used to the sound of shots during the deer and elk rifle seasons, and she relaxes. I guess that our walk today was too short to allow her to get used to the reverberating booms reaching us from a distance. She'd look over her shoulder and scan the surroundings after each one. 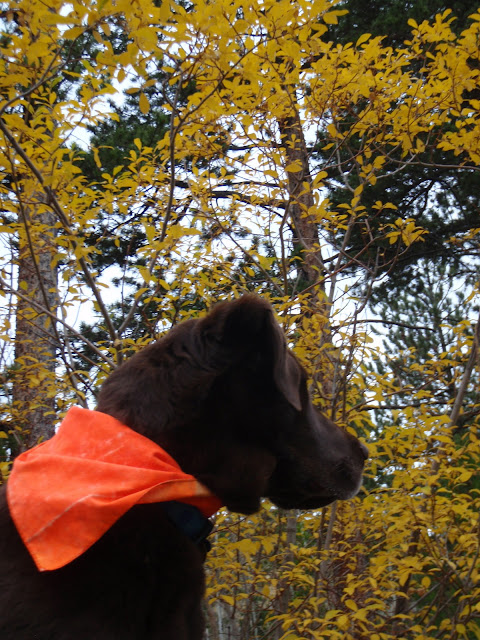 I am not a hunter, and I once had a dog killed by a gun. Consequently, like K, I get nervous during this season. Our house is an island in a National Forest so, occasionally, people hunt too close for comfort. The vast majority of hunters are responsible and ethical but it takes only one crazy shot to take a dog life or human life. Perhaps K was picking up on my nervousness. 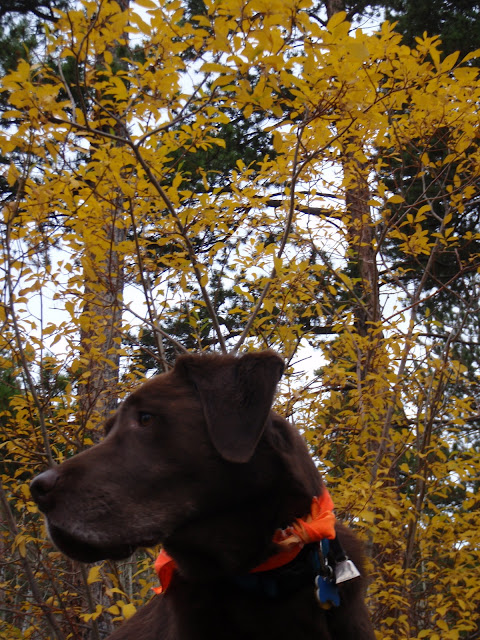 Maybe K would feel more upbeat if she knew that she has only *2* more weeks of a hard cast, and then she can start rehabilitation! We're going to have such fun together when she can walk a little further! I'm already planning the adventures!

After my nervous walk with K, I dressed R in his racing stripes for a mountain bike ride. He wore a full blaze orange vest because he was going to be off-leash. In contrast, K was tied to me, the Great Pumpkin, so she wore only a bandanna. I chose trails to ride where I've never seen a hunter in a decade because it would be too far to haul out a kill. Still, I was very vigilant, watching for fresh boot tracks or other signs of human presence.

We hauled ourselves up to Hug Hill where R modeled his racing stripes with an ominous Continental Divide behind him. 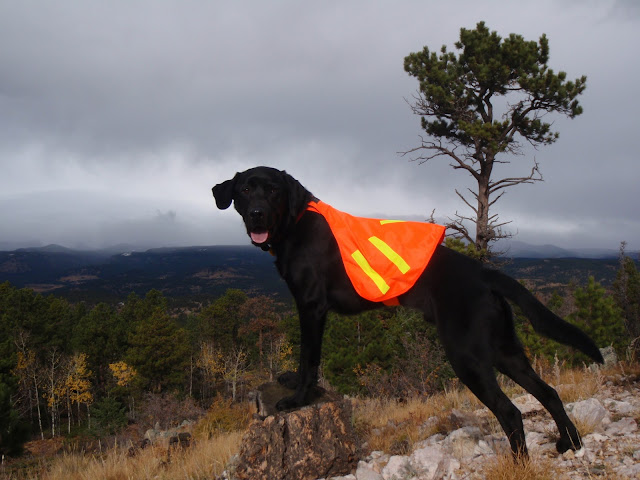 Then, he posed briefly with the Great Pumpkin. That photo shows that my blaze orange jacket has faded over the years - it's time for a new one (but they're very hard to find in my size)! 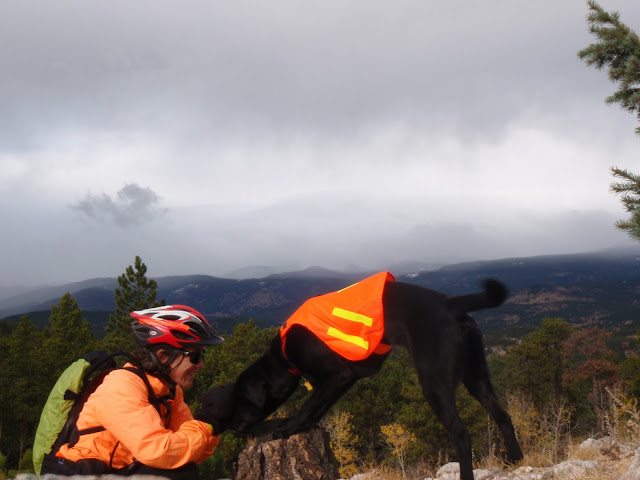 As we descended, we stopped to play some training games. I believe that it's most important to train R on the trails - where he's often off-leash and good behavior is absolutely required. At the end of the series of recalls, stays, and heeling, we played games on a boulder. I captured a series of photos showing his powerful leap onto the boulder. 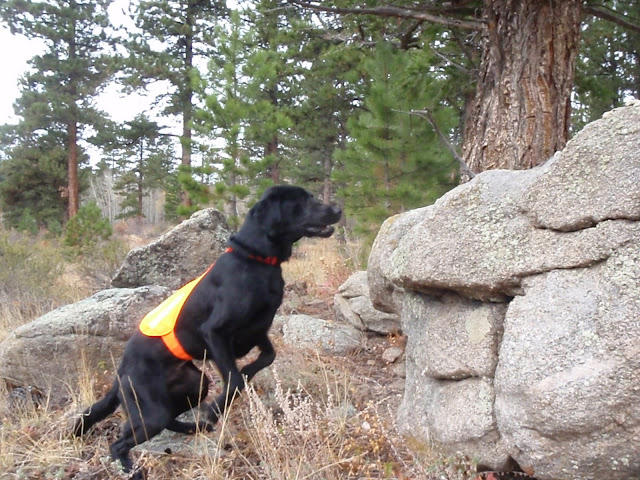 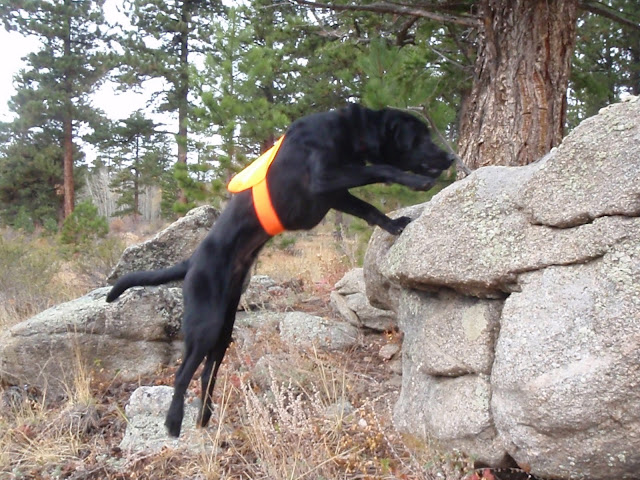 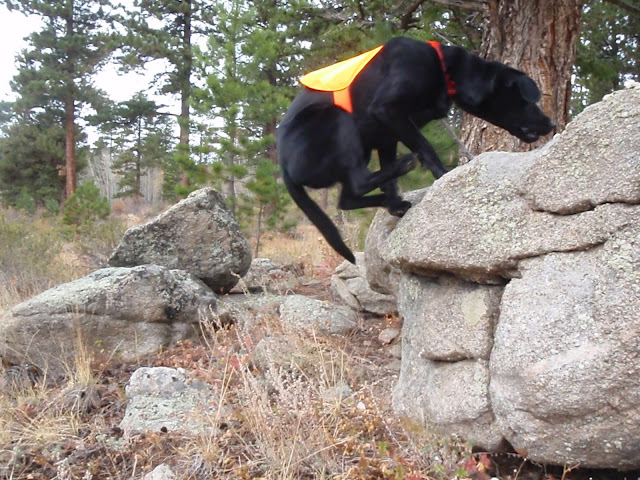 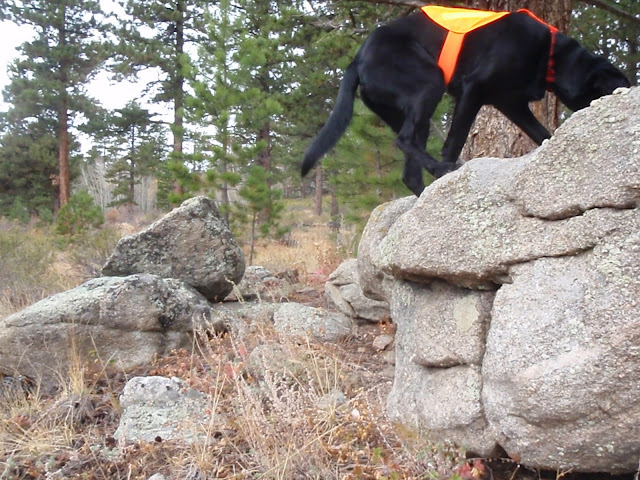 To leap, the photos show that he first goes up on his hind legs and then uses those legs alone to propel him into the air. What a beautiful leaper! I think that dogs are stupendous athletes compared to us humans!

After R and I did a relatively short ride, I headed out on my own for some more riding. To my surprise, for 95% of my ride, I saw no one else, not even a hunter. But, at one point near the middle of my ride, I realized that I was following a trail of blood and fur, doubtless from a dead deer being hauled out of the forest. I tried not to focus on it and kept riding.

The clouds over the ridges mesmerized me. 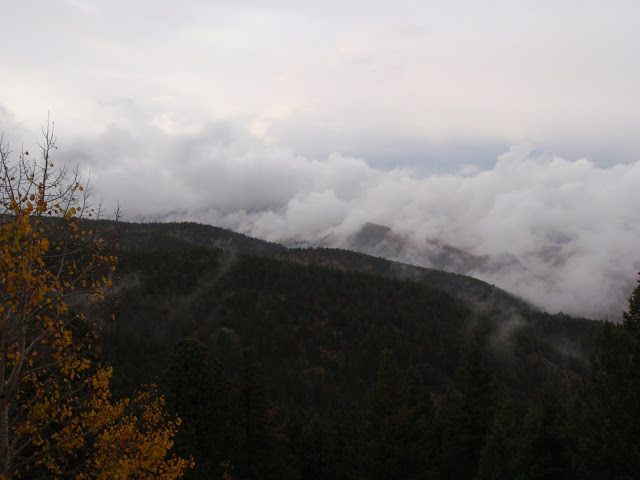 More blood splatters. Keep looking at the mountains, I thought. 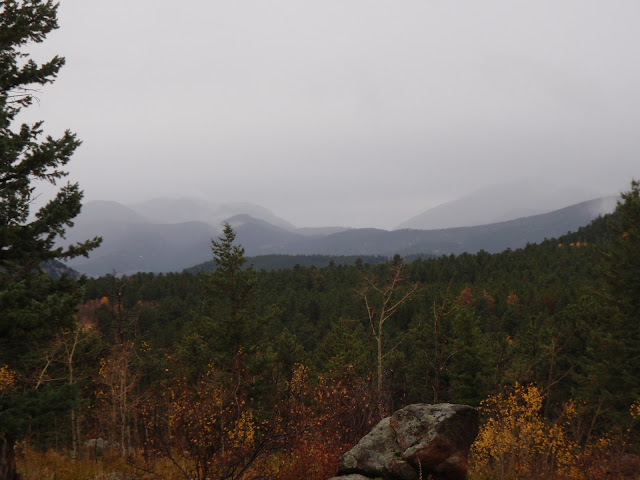 I emerged onto a 4wd road that I hate but but it's my only choice for about a half mile of a wonderful loop ride. There, where my singletrack trail met the road, I saw hunters behaving abhorrently. They'd shot a huge beautiful buck, a perfectly legal act. But, they'd tied the gorgeous animal, who was alive and strong a few hours earlier, to the rear of their jeep and were dragging it along the dirt road, tearing off the hide and gouging the meat, while leaving a swath of fur, skin, and blood. This act of disrespect was beyond my ability to comprehend. I literally turned around and went the other way so I wouldn't have to see them for an instant longer.

Just so you know, I believe that most hunters are ethical and respectful. There's one grandfatherly hunter who I see every year during rifle season. In fact, I look forward to running into him because he knows many pearls of wisdom about nature that he imparts to me in our conversations. Moreover, he never forgets about the safety of others in the woods. I'm pretty sure that the vile act that I saw today would have made him as sick as it made me.