I've had a lot of eyes on me recently - first a bobcat from last night who visited one of my motion-activated wildlife cameras posted in our forest. More about that later in the post. 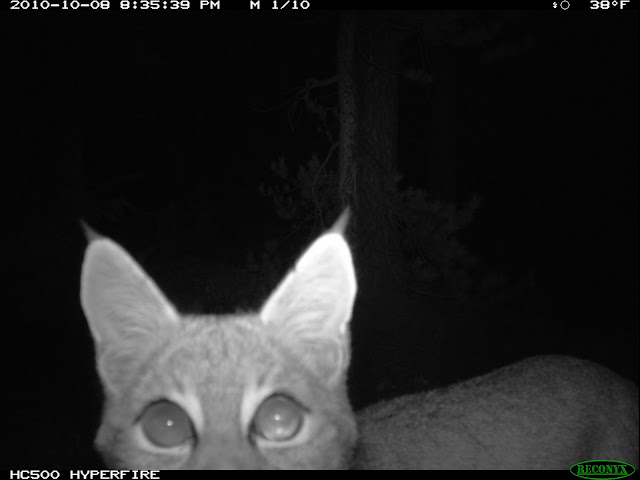 Then, K looked at me with a fierce intensity during our morning wander in the woods. 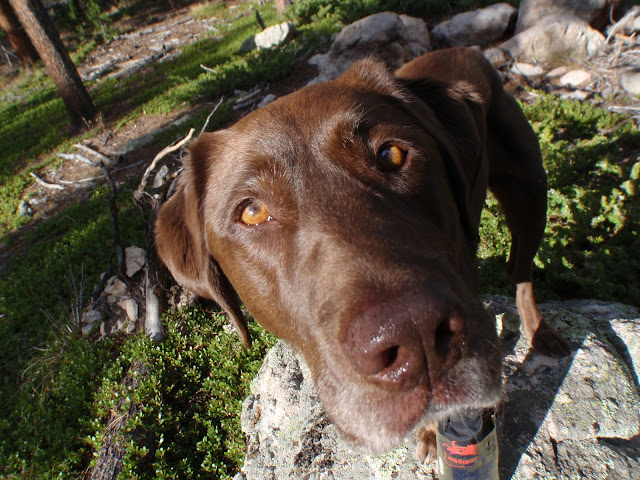 K loves making eye contact with me. Even when we're walking, as my wildlife camera photo shows, she often peers at me. Yes, that's a down jacket - winter has arrived. 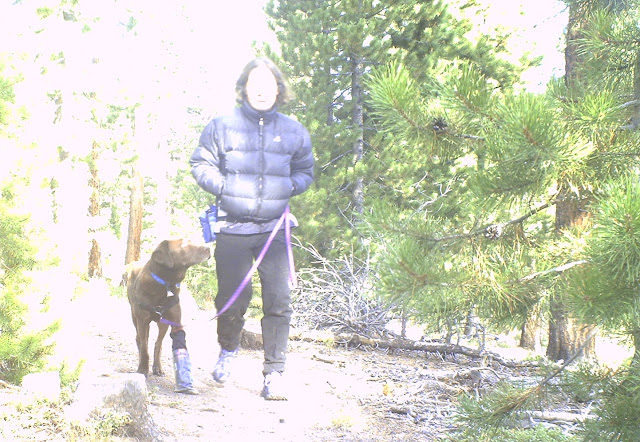 After taking K for her brief stroll and playing with her, R and I headed out for a short mountain bike ride. The wildlife camera on my property captured our image. For new readers, R wears a muzzle in the woods because he has an obsession with eating wild mushrooms. The mushroom season seems to never end because the squirrels harvest them and hang the mushrooms in trees to dry with plans to eat them in the dead of winter. Then, gusts of wind blow the 'shrooms to the ground, and R finds them. So, although no live mushrooms are growing in our forest now, R still has to wear a muzzle after our banner mushroom season. 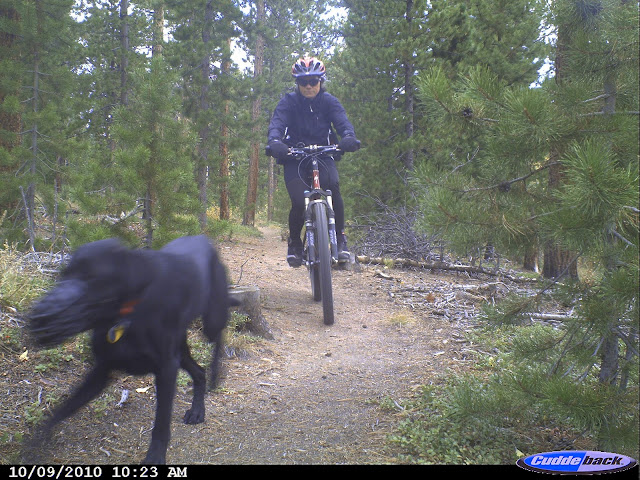 Then, during a break in our ride, R gazed into my eyes. Look how "soft" his eyes are compared to K's eyes when she looks at me. R looks me straight in the eye but he squints and blinks quickly. I've read that those mannerisms mean that he's trying to be non-threatening because, in the dog world, looking anyone straight in the eye is an assertive and almost aggressive move. 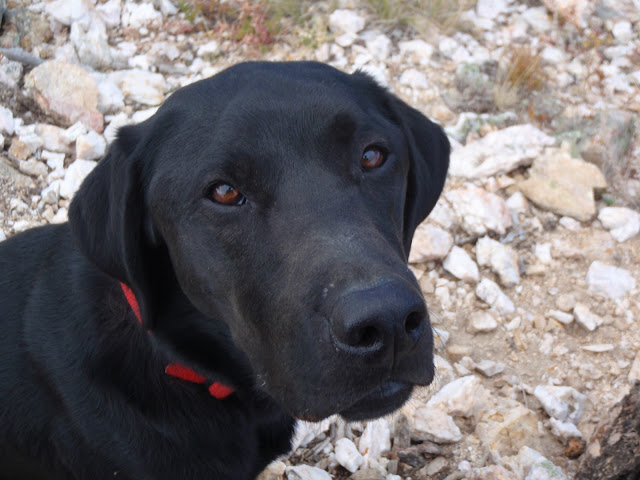 R and I climbed through cold and damp air through brilliant aspen groves. 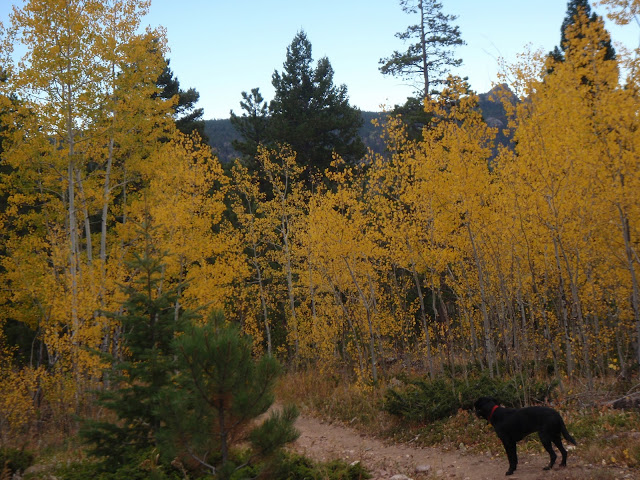 We arrived up high to see a thicker coat of snow on the Continental Divide and active storms swirling among the peaks. No doubt, winter has conquered the alpine world. 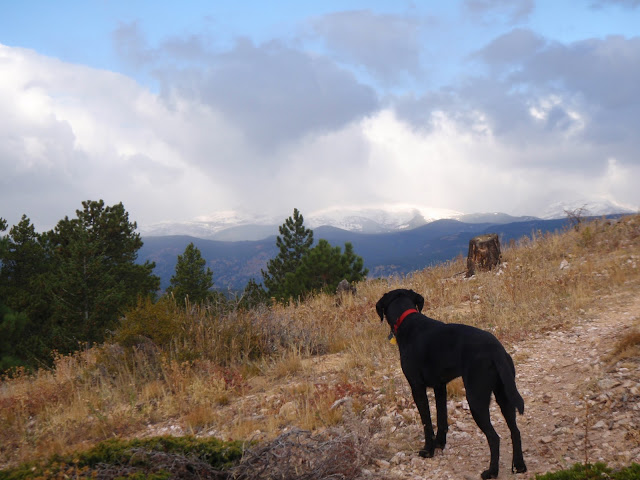 Indeed, during my longer ride later, the storms descended from the highest peaks and moved toward me. It snowed briefly but then the storms retreated to high elevations. 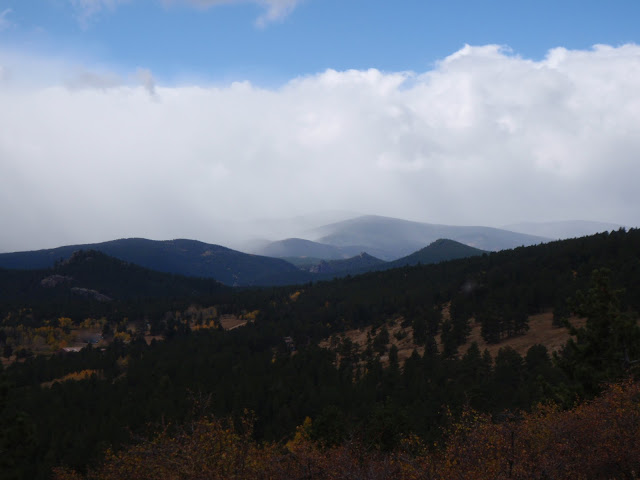 I loved my bike ride today. It started right, with R by my side, although I never stop aching to have K with me. Then, my legs felt snappy and ready to pedal. I sprinted up small hills that have felt like endlessly steep mountains to me lately. I think that the Power of the Paw has helped me immensely. And, because my attitude is much stronger and more upbeat, K seems happier too! Thank you.

I've written in the past about my vision of the bobcat as an example of a feisty, defiant, and resilient animal. When I had spine surgery back in January, I wanted to use the bobcat as my guide for approaching the whole process with panache.

So, I felt a surge of energy when I saw that a bobcat had visited two of my motion-activated wildlife cameras in the woods near my house last night. First, at about 8:30 PM, he stared quizzically at a camera posted in an anonymous spot in the midst of the forest. Notice his huge eyes - that's a hallmark of a nocturnal animal. 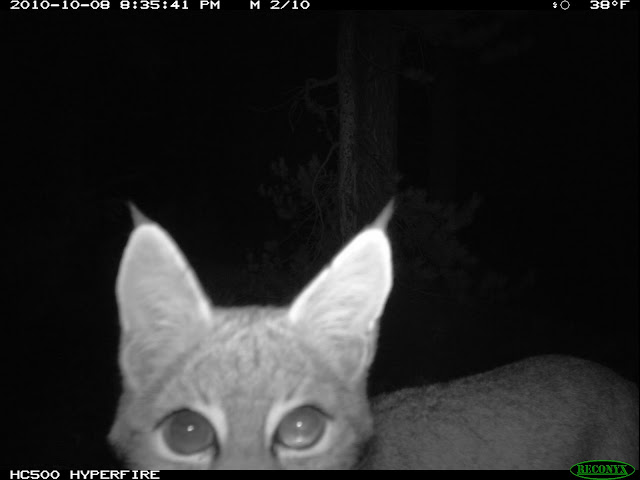 Then, he moved closer to sniff it. 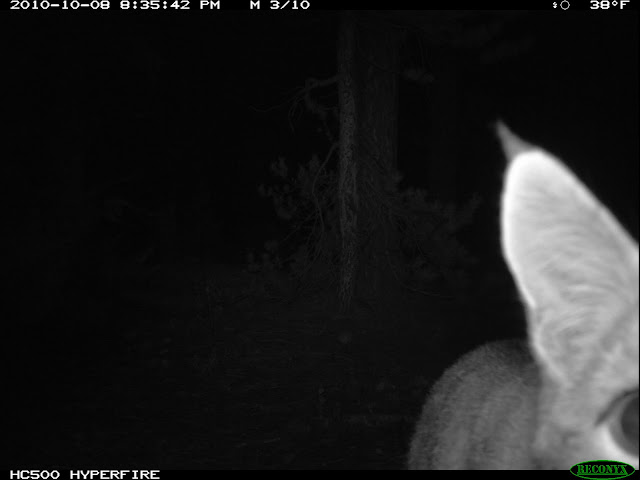 After sniffing the camera, he rubbed his face against the camera, clearly marking it with his scent. This behavior is known to be done by bobcats to announce their presence. The VERY odd thing is that this exact camera has now been marked by a bear who rubbed his back on it, a mountain lion who rubbed his body on it, and a bobcat. I think that the camera itself is becoming a scent post. I never expected that. Here's one of several photos of the bobcat rubbing his face on the camera. 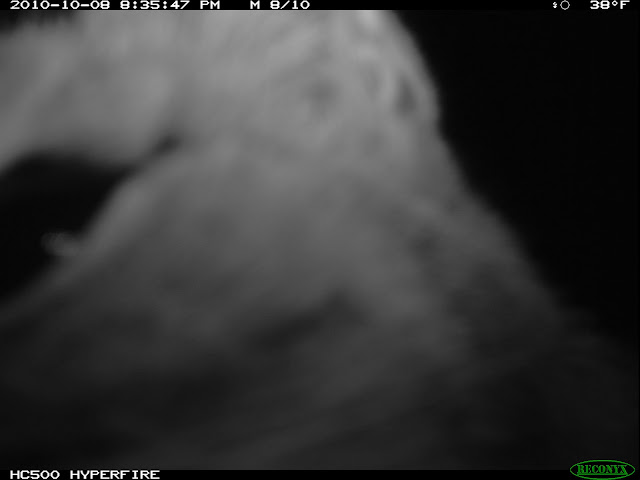 Next, he went to the spot in front of the camera where several bobcat scats lie and where a mountain lion left a big paw scrape about 2 weeks ago. 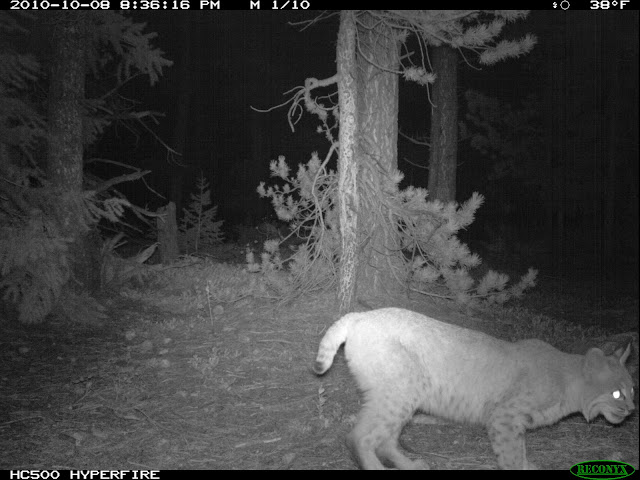 After looking around, he focused in one direction and appeared to open his mouth. Perhaps he was meowing? 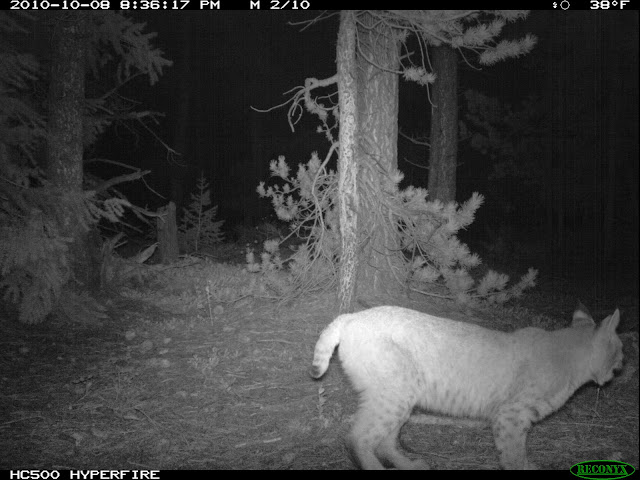 About nine hours later, before dawn this morning, the wildlife camera on my property caught a bobcat walking past. Was this the same bobcat who had visited my camera a mile away nine hours earlier? Perhaps he tracked me from one camera to the other. In any case, the bobcat behind my house looked very well fed - his belly hung low, full from a good meal. His paws looked dirty, like he'd walked a long way during his night of hunting. 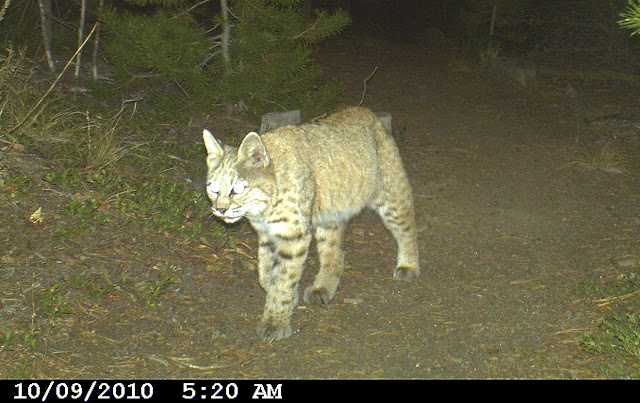 If I were the mystical sort, I'd say that the bobcat visited my slice of the woods last night to infuse me with positive energy that I can use to help K heal. Regardless of why he visited, he did infuse me with a defiant strong attitude. Thanks, Bobcat, I needed that.