Power of the Paw

K and I started slowly this morning, first snuggling, then playing some games, and finally heading out for a walk into the first morning that felt like winter. K stood next to a 10 year old aspen that is starting to change colors. I noticed its tiny sprout poking out of the ground a decade ago and protected it with a rock ring. Look how tall it is now! 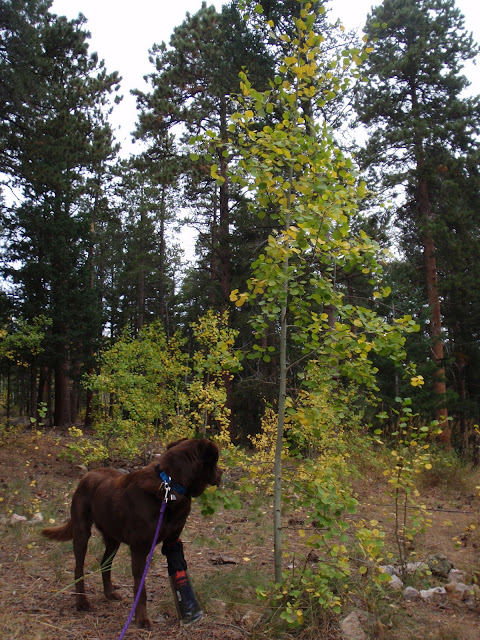 K and I walked slowly, scaring up a gregarious flock of robins from an aspen grove. Their sudden fluttering and calling alarmed K but she calmed down for a photo by an aspen tree. 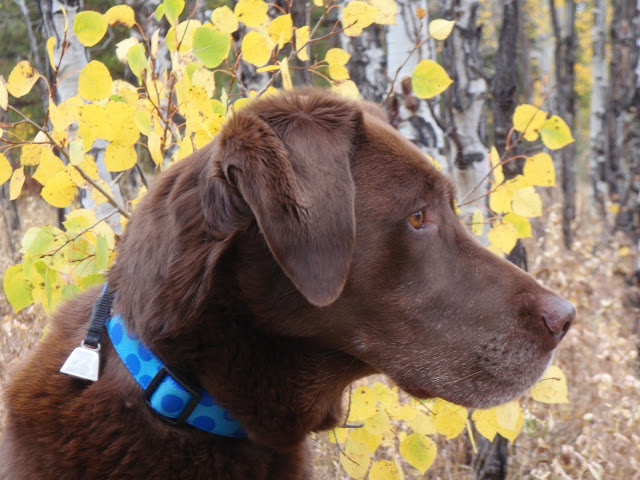 When we arrived home, we played our "pick out the toy" game. K has learned to pick out "octopus" very reliably, and today, she suddenly seemed to recognize another toy as well. Here she is surrounded with a plethora of toys before I asked her to pick up one specific toy. 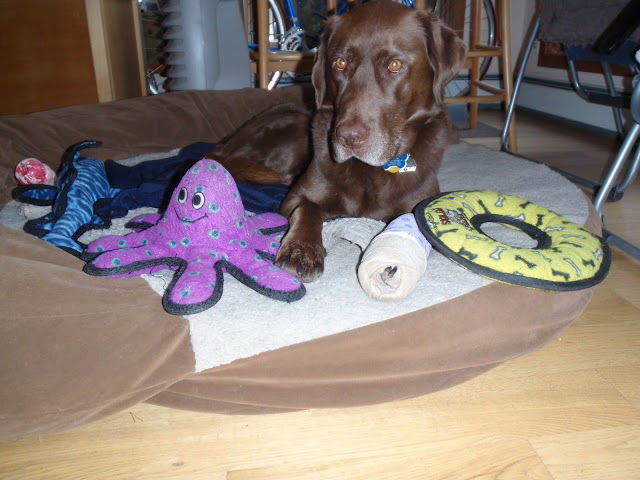 Then, I said "ring", and she made the right choice! 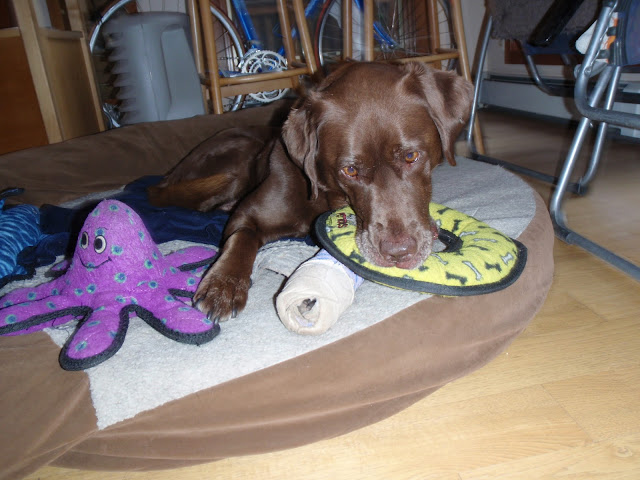 K seems to love the attention that I shower on her while we play these mind games designed to keep her sane during this long recovery. Our time spent playing games and going for tiny little walks tells her that she's still my special girl.

Today, she reached the 2 week post-surgery mark and had her cast changed by our vet. Fortunately, her sores and skin infection had cleared up. Moreover, her paw looked normal, unlike before surgery when one toe jutted upward at an unnatural angle. That's all such encouraging news, helping buoy my spirits. It seems almost silly how much the angle of one of K's toes can affect my mood!

After spending time with K, I took our black tornado, R, with me for a short mountain bike ride. We climbed up high to Hug Hill, and the sight of the first snow on the Divide awed me. It's the beginning of a long season of the mountains being cloaked in snow. 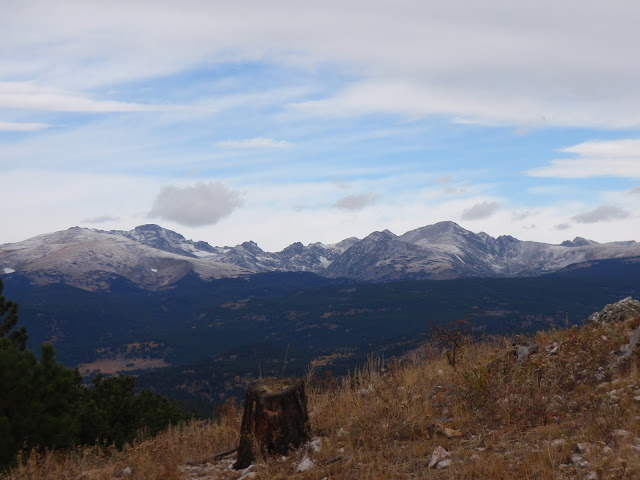 While I gawked at the view, R busily tried to corral a chipmunk who was stuck in an island of juniper bushes. This chipmunk has made the same mistake before, ending up far from his burrow with R focused on him, wagging his tail at warp speed while tracking the rodent. To my delight, I discovered that our training is paying off - R responded to a "leave it" and then "come", abandoning the chipmunk chase to get rewarded by me. Behind R, the chipmunk scurried to his hole. 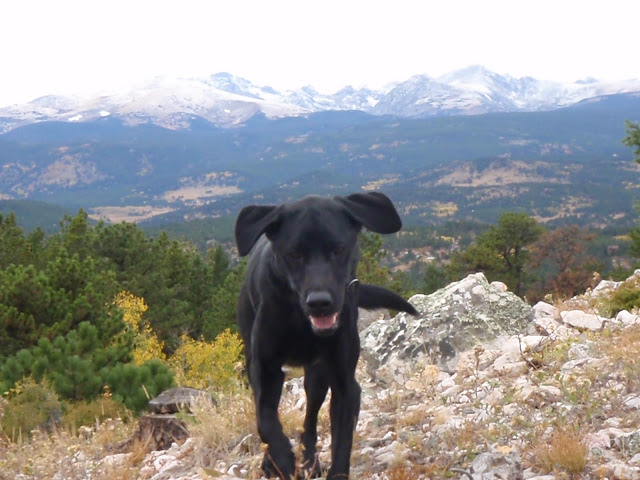 Then, in this very exciting spot for a rodent-obsessed dog, we practiced a stand-stay. R held it rock solidly, and appeared to gaze at the snow-powdered mountains. In reality, he was probably contemplating the chipmunk. R's chances of catching that chipmunk may be over until next spring, for the chipmunks go into hibernation very soon. In fact, the forecasted chilly weather for the next few days may send them into their burrows for the next 5 months. 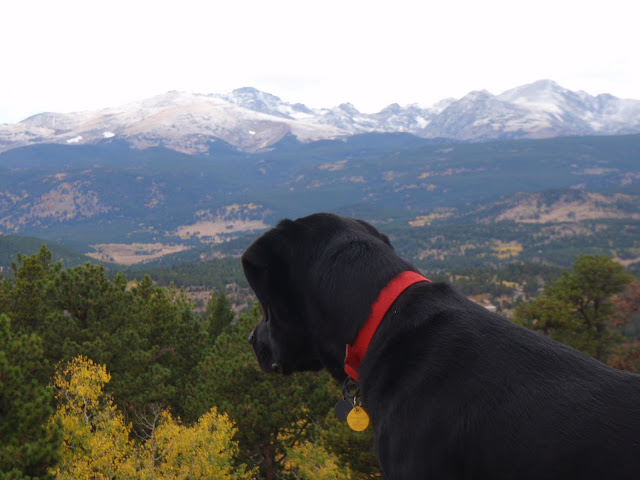 Soon, I left R at home and rode a little further by myself. I pedaled up to a favorite ridge to see the Divide. During my climb, a wall of clouds enveloped the Divide, almost totally obscuring the gorgeous mountains. Indeed, as I pedaled along the spine of the ridge, first hail and then "snail" (hail-snow mix) fell out of the skies, freezing me to the bone. I think that our Indian Summer is over. 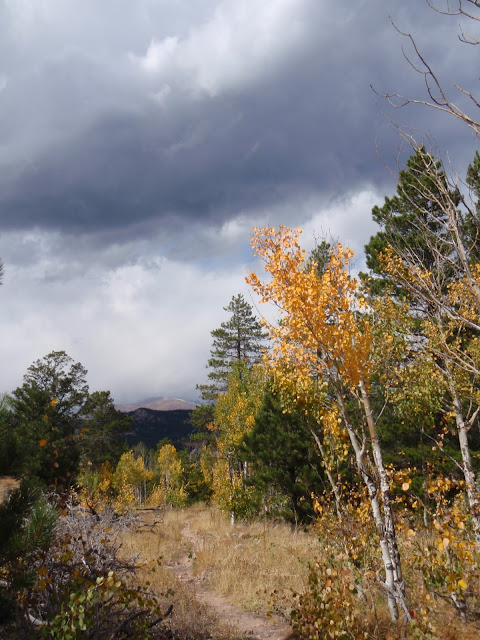 Just like yesterday, during my ride, a vision of K running next to me kept shimmering in my mind. I'm finding the positive attitude that I need to have, for K's sake, to help her heal. Thanks to my friends out there in Blogville who have been so kind over the past weeks.