Winter has arrived, no doubt. Suddenly, cold wind is sweeping off the Divide, dropping trees onto trails, ripping yellow leaves from their moorings, and buffeting mountain bike riders. A dampness pervades the air that tells me that snow cannot be far away. And, my back hurts, both my lower back and neck. For those of you who follow my blog, you know that spine pain is a constant in my life. This year, the weather change has changed it from a dull constant presence to a fiery spear. Hopefully, that will pass soon and I can delay my next surgery for at least another season.

When I hurt, I keep moving. It's always worked best for me - keeping my muscles and joints more supple than they'd otherwise be. Being outdoors and active also keeps me happy - an awesome side effect!

My best furry friend, K, and I hobbled out for our walk this morning. She seemed to sense my precarious mood and tried to make me smile. Look at the size of the stump that she put her front paws on! Can you imagine that, sometime long ago, a logger actually felled such a magnificent tree for lumber? 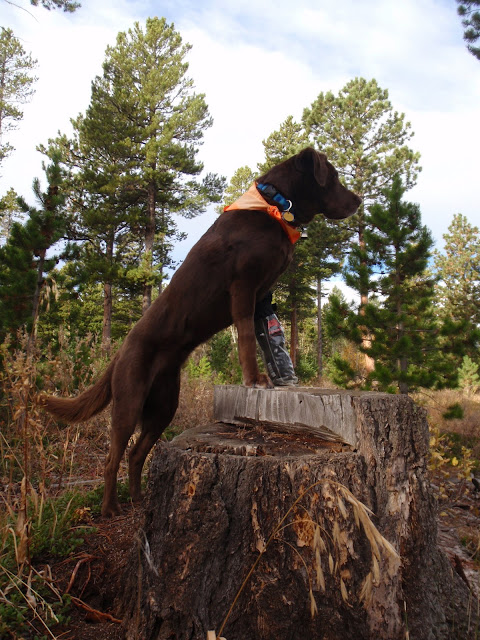 Very briefly, the sun burst out during our walk, and K climbed onto another stump. It seemed to be "Stump Day" for Miss K! She looked so serene and beautiful in the sunshine that I smiled from ear-to-ear. 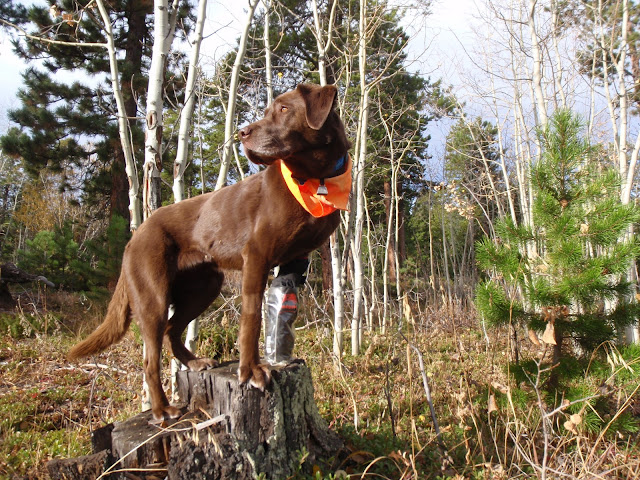 Today, after leaving K at home with the two R's (R and the Runner), I headed out for a solo mountain bike ride. Nothing, and I mean absolutely nothing, relaxes the spasms in my back like pedaling a bike.

Early in my ride, the clouds lifted just enough for me to see that our local ski slopes have solid layers of snow on them! I used to love to telemark ski on downhill slopes until it was forbidden by my docs due to my back. However, I still smile when I see the first snow on the ski slopes out of happiness for all the ski-lovers in my life. 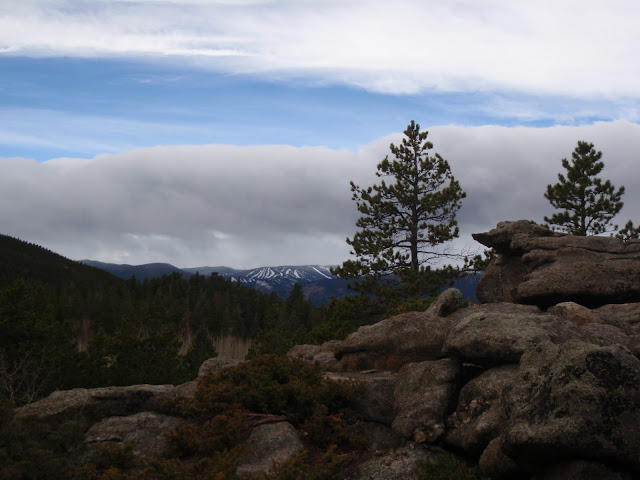 I pedaled as softly as the mountain trails would allow, listening to the whooshes of the wind gusts making the forest sing with flying pine needles, fluttering yellow aspen leaves, and ominously creaking trees. I crossed a plateau, on the lip of a canyon wall, and I spotted a mountain lion scrape. The lion's hefty hind paws had kicked backwards, leaving a bare patch of dirt with a pile of pine needles and cones behind it. This scrape tells the other forest dwellers that the lion is king. I went to stand in the spot where the lion had stood so recently, hoping to cull some of his intense energy for me.

Near the scrape, I stopped my ride to visit one of my remote wildlife cameras, the one that I believe has become a scent post for animals. So far, a black bear, mountain lions, and bobcats have vigorously rubbed their fur on this camera. I've tried putting it on three different trees in the clearing shown in the photo below, and the animals follow it, marking it or just below it, regardless of where it's posted.

The problem is that the camera doesn't get great photos of an animal who is up against it! Below, you can see that an animal recently visited it but, out of the 20 photos taken by the camera, this one was best. I think that it was a bobcat based on the height of his back. I'm starting to think that I need to point another camera at this one so that I can see what animals visit it! 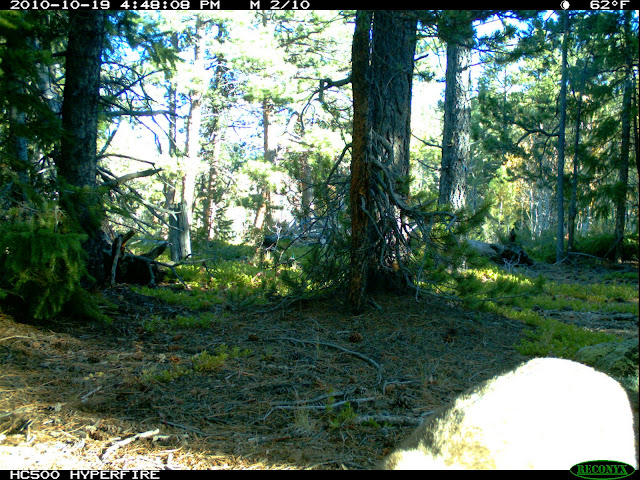 After riding and checking wildlife cameras, I arrived home tired but content. My back is better but still not "normal", whatever that means for a person with five fusions in her spine living on the brink of winter. 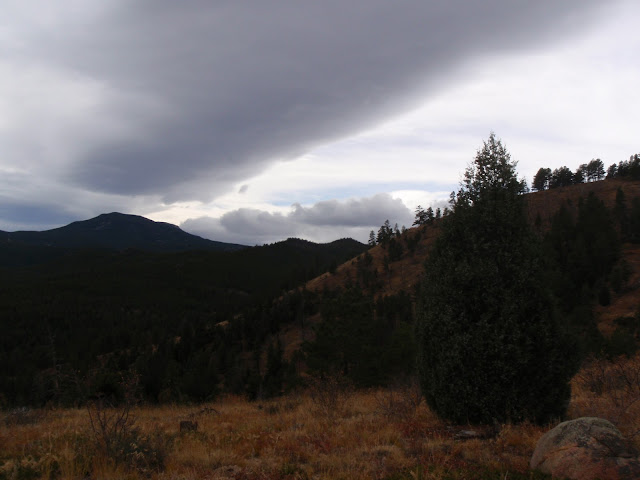 I've been doing physical therapy continuously since my January neck fusion surgery but I recently lost most of my enthusiasm for it. So, my PT did the perfect thing to motivate me. She quantified my tremendous improvement. She told me that, 8 weeks after my surgery, my neck had rotated by a paltry 21 degrees in each direction (left and right), while an ideal neck goes 90 degrees in each direction. After all these months, I've more than doubled my initial mobility, and I've exceeded the "expected" mobility for someone with so much of her neck fused by leaps and bounds. Okay, I said to her, let's keep working. Maybe we can keep my mobility so good that my "next" surgery for my degenerating spine is far off in the future.

In the meantime, I'll keep pedaling, and hopefully, K will be back by my side before I know it. Pretty soon, K and I will be the Physical Therapy Twins - because she'll start canine physical therapy for her surgically repaired paw tendon in a couple of weeks. I am so excited that the day when she can start being more active is approaching!
Posted by KB at 5:11 PM