As the Bobcat World Turns

The bobcat family has been active recently. This is the mother bobcat, out on her own. She had probably stashed the kittens in a den.

At first, she looked like she was "all business", walking briskly past the camera. 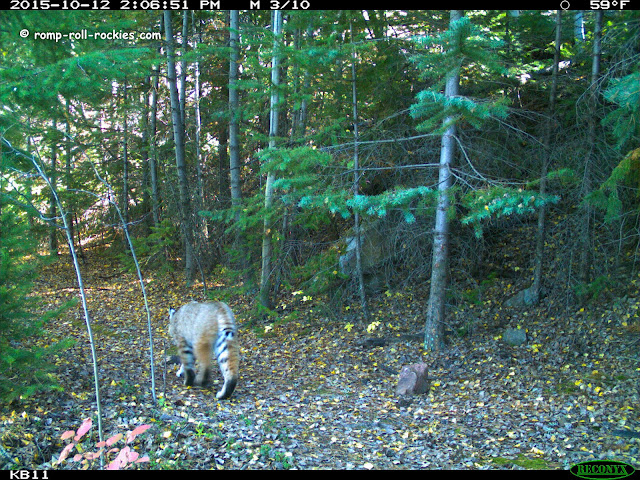 Then, after she had passed the spot that most animals mark (at the base of the bear marking tree to her right), she started to act goofy. 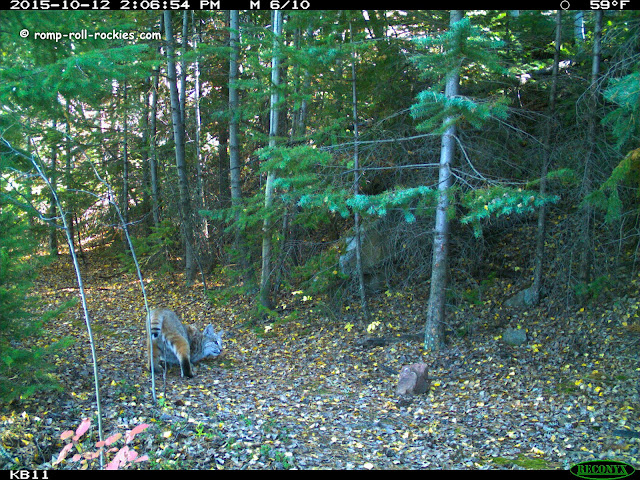 Then, she got even more goofy, rolling over on her back like her kittens do. 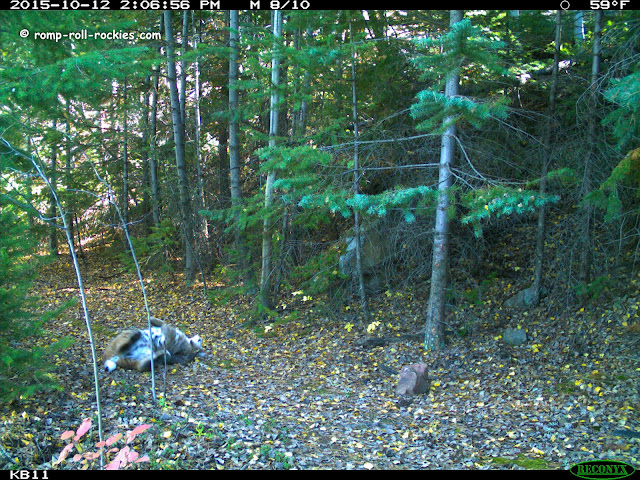 As quickly as she'd arrived, she leaped to her feet and departed. When I've seen the seemingly stoic bobcats and mountain lions around here, it never occurred to me until now that they do let down their guard and goof around like this.

A couple of hours later, the mother bobcat walked past the same camera again. This time, she carried a mountain cottontail rabbit, that she had just killed. She was carrying it to the den for her kittens to eat. 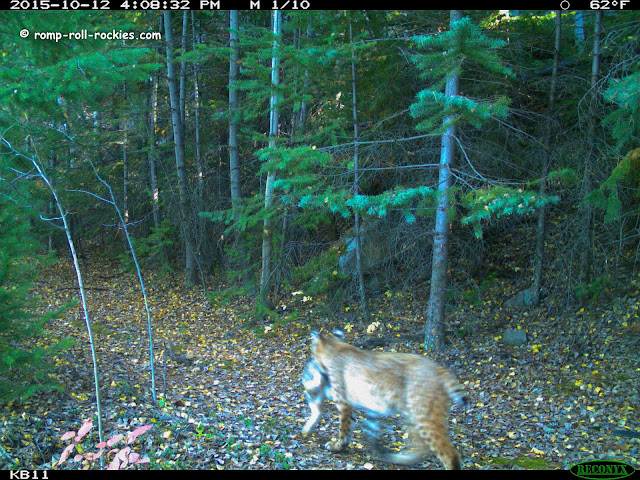 She seemed to sidestep past the spot where she'd acted so goofy just hours earlier. 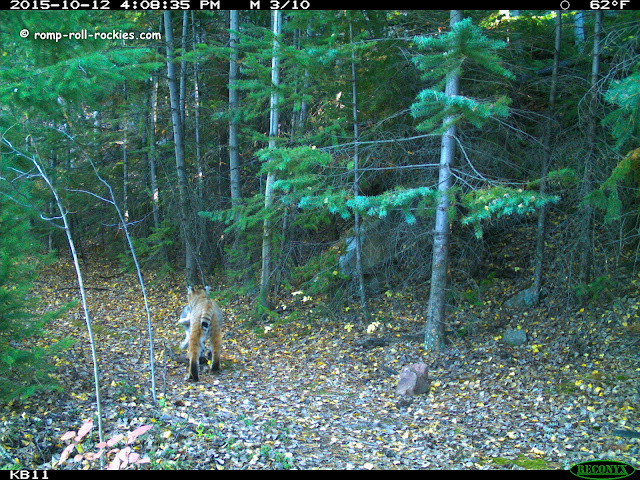 Then, I had no more sightings of the family until ten days later.

One afternoon last week (3:30PM on 10/22), a pair of bobcat kittens came out of their den to check out the world. I love how dappled with spots their fur coats are by comparison to their mom's coat. These are trail camera photos zoomed in on the kittens. 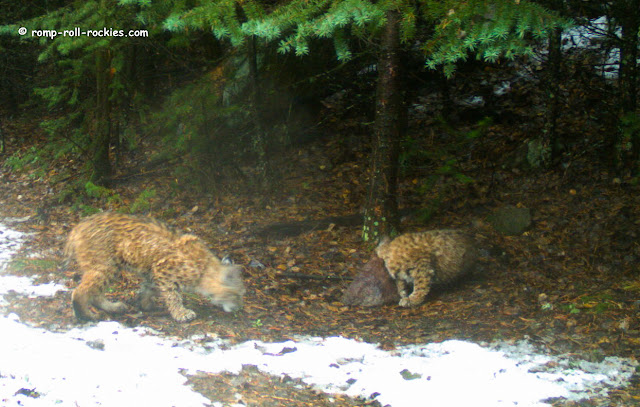 You may remember that our last sighting of the bobcat kittens with their mom involved a skunk causing the family to scatter. After the skunk passed, one kitten didn't reappear, even though the mom and the remaining kitten remained in the area for hours. These photos tell me that both kittens are fine. 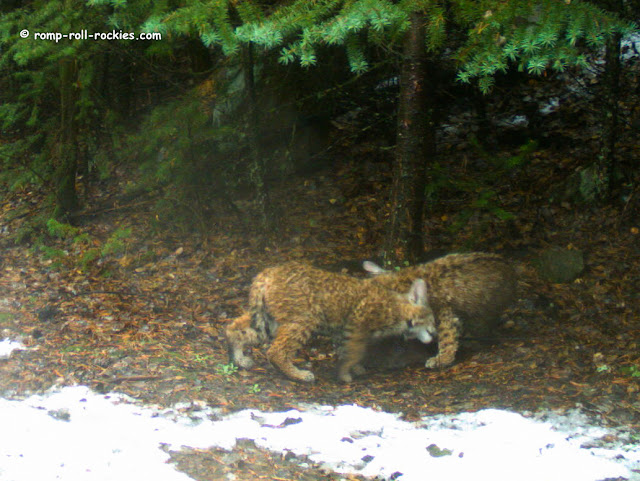 They also show us the kittens' first experience with snow. It snowed a few hours before these photos were taken. The snow melted very fast after it fell. 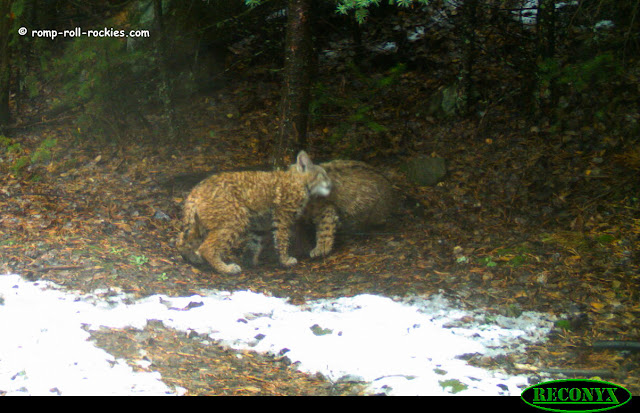 The two kittens were playful in front of the camera. I love seeing their bright white but spotted bellies! It's even a better view than we had of their mother's belly 10 days earlier. 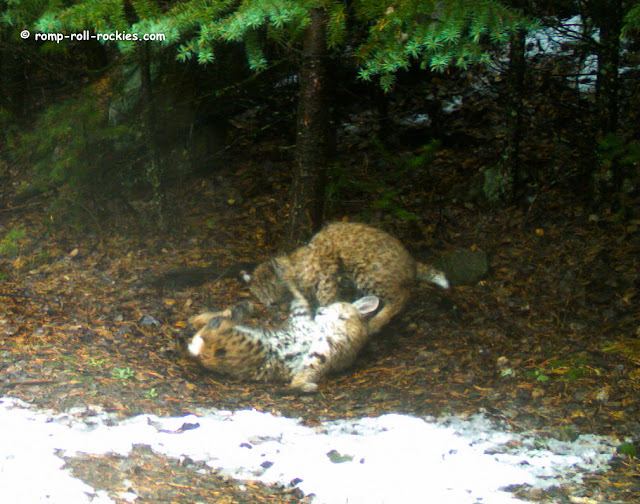 I'm guessing that mom was nearby, keeping an eye on the two kittens but not joining in their play.

I'm so happy that our world still has places where the wildlife can relax and just be themselves. Our neck of the woods is notably still that way because there's so little human "traffic" on the trails.

That's why I work so hard at training our dogs, especially focusing on being able to recall them away from all animals. 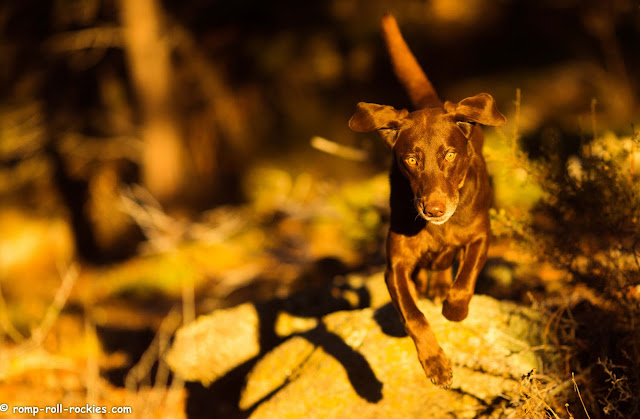 I think it helps keep our dogs and the wildlife safe.  And, it's fun! I will write soon about the hit that our training has taken since my spine injury and how I'm trying to adapt.

But, for today, I'm mainly happy to see that the two bobcat kittens are both fine!
Posted by KB at 6:02 PM