Yesterday afternoon, a front moved into our neck of the woods. The breeze picked up, cold and damp. It felt like winter, and it looked like it was about to storm. 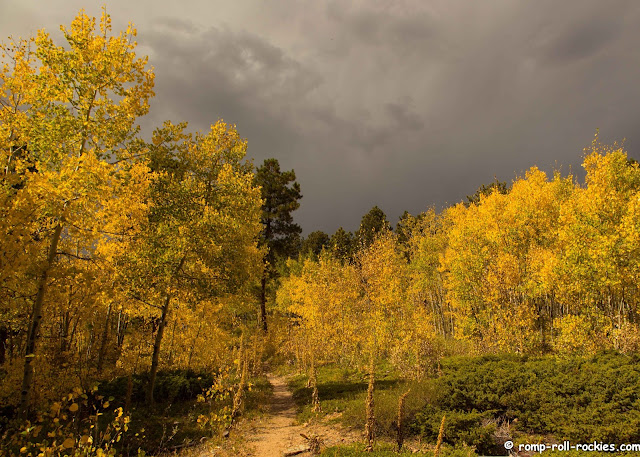 This morning, I was up early enough that Shyla and I would've seen the sun rise if the skies were clear. My migraine preventative medicine makes me groggy so this isn't a frequent occurrence anymore. You can imagine my disappointment to discover that our entire world was socked in by thick and cold fog as the world became light.

I pedaled slowly through the forest with Shyla by my side, up toward Hug Hill. Much to my delight, the fog bank started to recede back down the canyon while we were on Hug Hill. One by one, hills to the east of us (including Long's Peak) appeared as the fog around them receded back toward the flatlands. 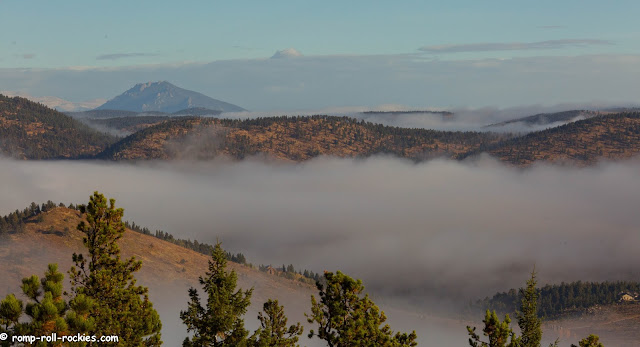 In wonderful sunshine, Shyla and I continued our ride. We passed through an area where moose have been hanging out. At this time last year, sighting a moose in our neck of the woods was a rarity. Now, we have at least four moose living nearby. Two are the mother moose and her calf. The third is the mother moose's yearling bull, and the fourth is a big bull who is searching for a mate.

The mother moose and new calf have learned where humans usually are and stay away from those areas. My last photo of them was from late June when I spotted the pair in a dense aspen forest as I rode my mountain bike. The calf is barely visible behind a tree off to the right of the mother moose. 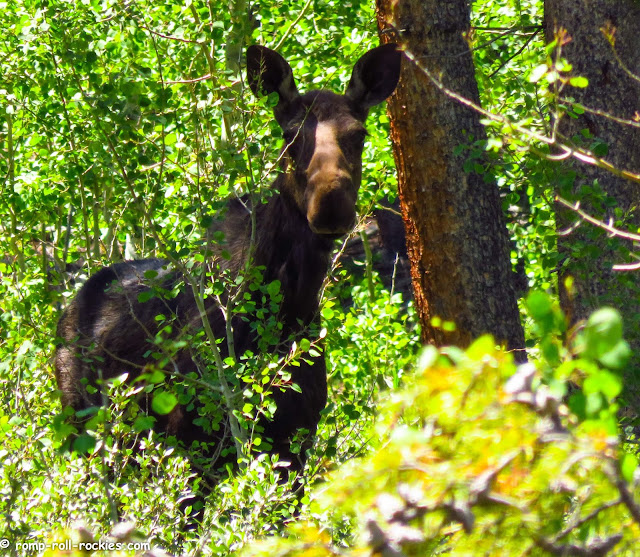 This mother moose's calf from last year, a yearling bull, has had his photo taken by my trail cameras on many occasions. He must have injured his antler pedicle when he was younger because his right antler has not developed correctly. From what I've read, there's a chance it will grow correctly in a couple of years. You can see a sagging spike on his right side in the next photo. 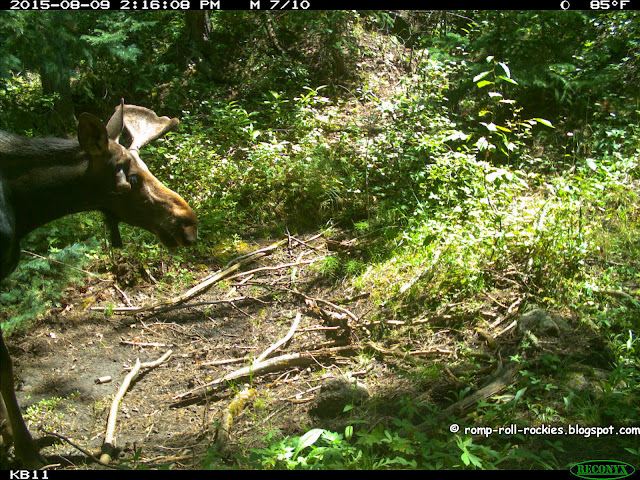 This youngster has been almost invisible since the big bull has arrived in the area. Here's a contrast between the two, each passing exactly the same spot. 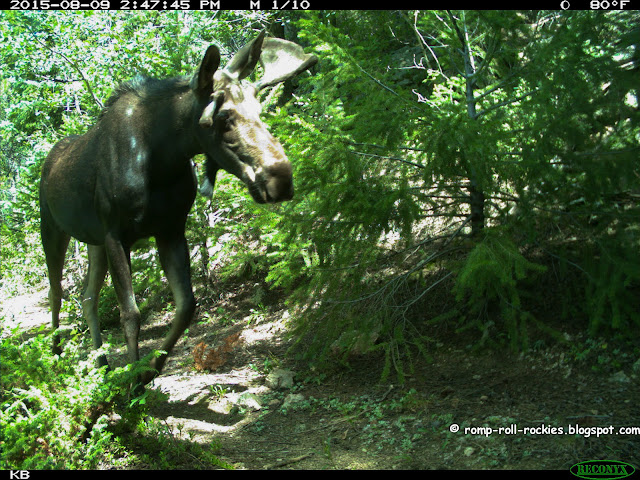 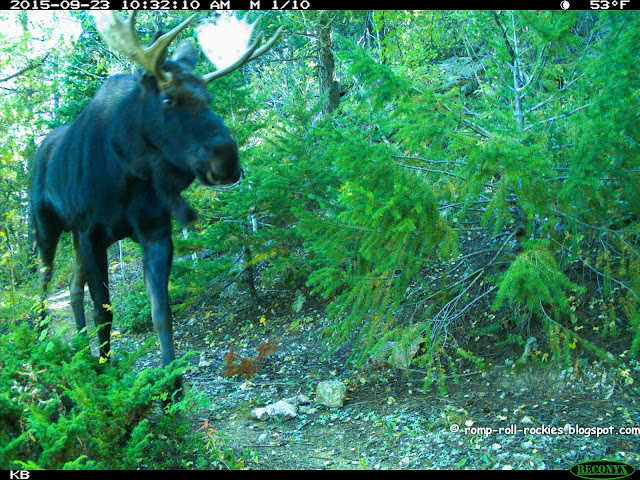 The big bull has hooked up with the cow and her calf (a neighbor saw them together). Shyla and I pass the general area where the moose family is hanging out many mornings. We've seen a sandy pit that the bull moose has dug up and then urinated in. He seems to dig and urinate more every day.

My reading says that he probably wallows in this pit, getting the mud from it on his neck and antlers. That sounds yucky to me but apparently it's attractive to a cow moose!

This morning, Shyla and I stopped about a 100 yards from where the moose has been wallowing daily. Shyla was on high alert, and I was watching her closely so I'd know if there were moose nearby.

First she looked to her right with intense eyes. 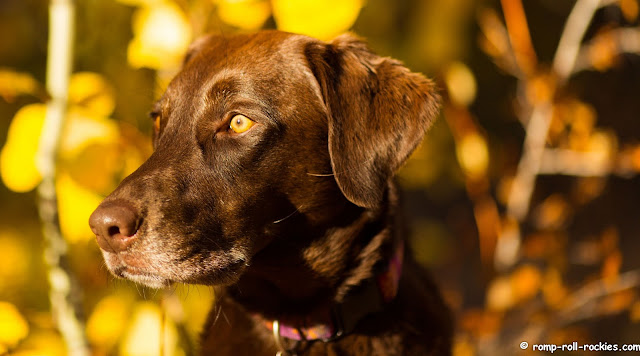 Then she looked left with softer eyes. 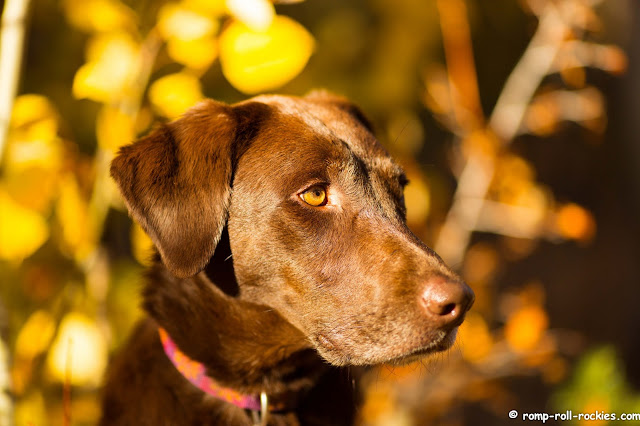 After swiveling her head a bunch of times, Shyla finally looked straight at me. After this look, I decided we ought to move on. Her face did not look relaxed to me. I didn't see any moose but I'd guess that they were in the forest near us. 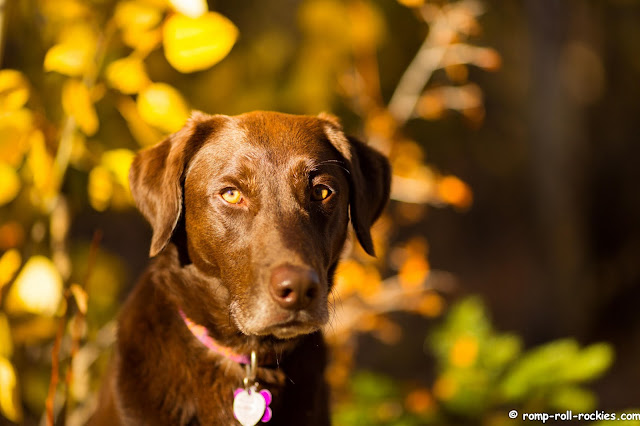 It's been an interesting year, learning about moose behavior and always being prepared to come around a curve and meet a big moose! Fortunately, we've had no more close calls since I was charged last winter. 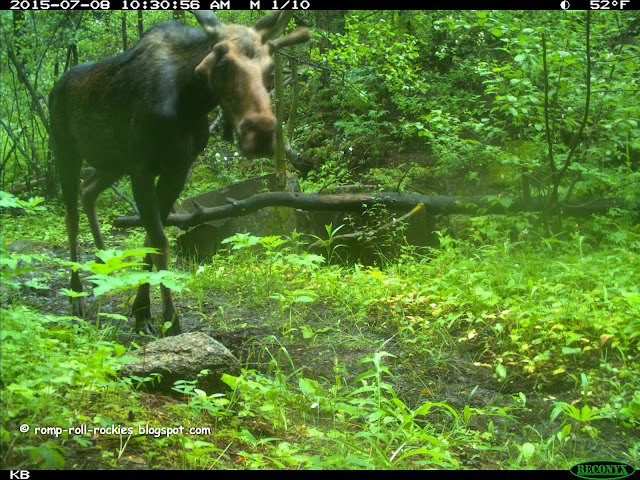 I hope that, eventually, we humans and the moose will become more comfortable with each other. For now, other people who use the forest are still reporting being chased by moose. The big bull moose has been the most recent aggressor... and I'm very glad that Shyla and I haven't met him yet!
Posted by KB at 5:20 PM