At 3AM, I was awakened by Shyla. Her body was jerking as her muscles spasmed rhythmically. They'd spasm and then release, about 20 times per minute. It was not a seizure because Shyla was fully conscious, responding to me, and able to walk. I got her up and walked her around, and the "jerking" stopped while she walked. Then, it restarted when she laid down on a dog bed. I kept walking her around, and then letting her lie down, hoping that the jerking would go away for good. It didn't after about an hour of this routine.

So, we got to drive to the Emergency Vet at 4AM this morning. Fortunately, the jerking finally stopped on the way to the vet. The vet didn't know why it had happened but sent us home with the instructions to video it if it happened again. It hasn't happened again so perhaps it was a one-time thing. I hope so.

Today is the anniversary of the deaths of two of our dogs, K (4 years ago) and Acadia (13 years ago). My heart really didn't need to start the day in the vet hospital with Shyla. At least we weren't in the same room where K took her last breath - a small blessing.

So, it comes as no surprise that I am still not feeling well - probably due to the accumulated stress from the fire plus our foray to town at 4AM. Sorry this post is so late - I'm at half speed today.

To cheer myself up, I made a fun video of some bears playing in a spring on the 4th of July. There's nothing that I love more than seeing bears take baths - they make me laugh! Plus, both of the sows who bathed have cubs so I bet that we'll get to see the cubs play in the water pretty soon!

Here's a photo of one mother bear arriving at the spring with her cub in tow. Her cub didn't bathe but you can hear the mother bear grunt to call her cub at one point in the video. 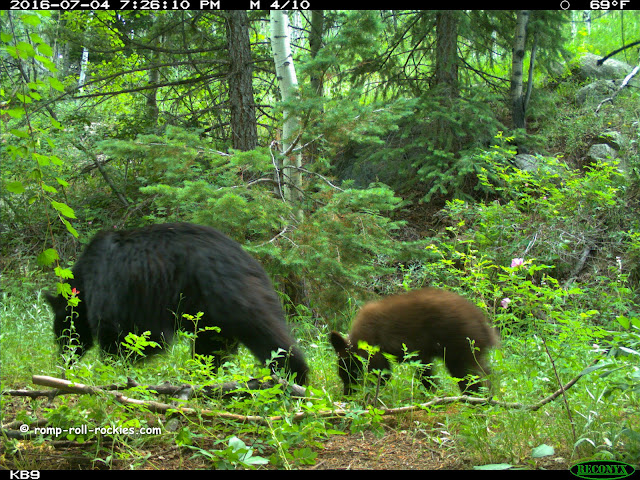 Here's the video which you can watch here or at Youtube.


I will soon show you a video of Socks, our former lost yearling cub, hanging out with the big males of our territory during mating season. She's now about 5 years old so it makes sense that she may be about to have her first litter of cubs. I am overjoyed that we'll probably get to see Socks raise cubs next year. Here's a photo of Socks, which should remind you of why I named her Socks (her black legs)! 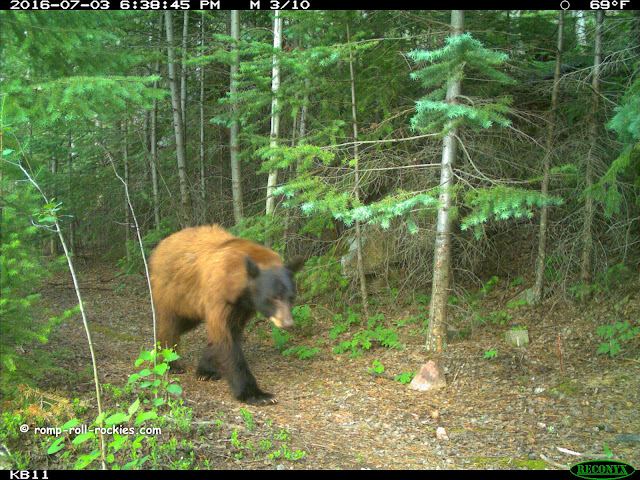 I believe that Socks is Cinnamom's daughter, a bear who long-time readers may remember. If you search for "Cinnamom" within this blog, you'll find lots of posts about her and her cubs. Cinnamom was killed by authorities late in 2014. If you look at the old posts, she already had a strike against her as shown by her ear tags. A "strike" means that she went too close to humans or human residences. A bear with ear tags doesn't get much leeway from the authorities, and thus, Cinnamom is gone.

I love having the daughters of bears who I adored watching carry on their traditions - like Socks is doing for her mom, Cinnamom. Similarly, Shyla is carrying on the traditions of our previous female Labs who died on this date, Angel K and Angel Acadia.
Posted by KB at 6:30 PM