We have several mountain lion families passing through our neck of the woods regularly. Early one morning this fall, a mother cat led her two kittens along a forest path. They passed a spot where male mountain lions scent mark, and the kittens were transfixed.

Mom was less curious about the scent. It was likely from a cat who she knew. So, she guarded her kittens as they sniffed. 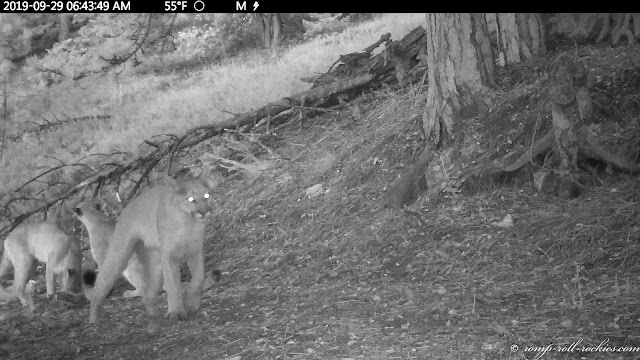 The family spent a fair bit of time at this spot but their actions, as recorded by my cam, were a bit confusing. All three of them exited left after the initial sniffing. Then, one came back but startled -and leaped straight up the hill on the far right of the photo, knocking a big ball of dirt down the hill. Then, another one came into the picture, and carefully sniffed that ball of dirt before following the first cat. While all that was going on, a kitten was walking up the hill in the background.

Then, a short time later, a single family member showed up a bit to the west. I'm guessing that the kittens had been left someplace to wait while mom headed off to scout for prey.

She stopped briefly to groom and then look toward my camera. She's a beauty. 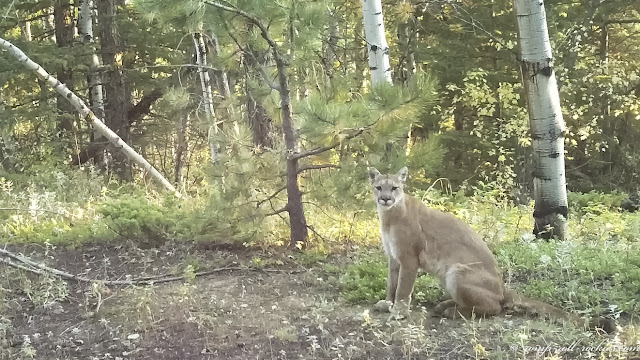 I am forever astounded by the responsibilities of a mother mountain lion. She must kill enough prey to feed the entire family. With how big kittens become very fast, that's a tall order!

I made a short Video of the family's escapades. I hope that you enjoy it.