Our Black Dog ran like the wind in the desert but only while playing with Shyla. It was an absolute joy to see. 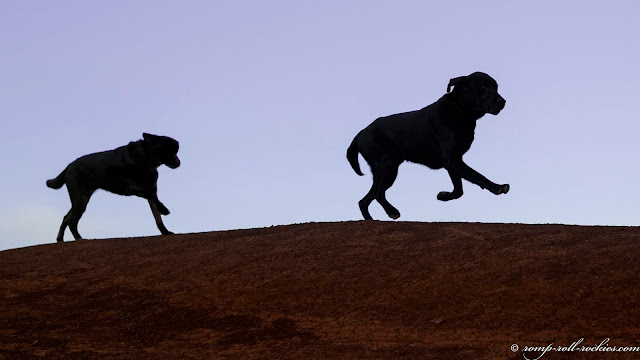 Since we've been home, he's been perplexingly variable in whether he wants to run or even walk. He seems to be improving now but the odd part is that his ups and downs are not correlated with whether he's taking an NSAID or not. We are puzzled.

In the meantime, I've restarted nosework with him to brighten up the days when he doesn't want to run around outside. It's been amazingly fun. Although he hasn't done nosework with me in years, R remembers it! We are starting with basic nosework games to help him to sharpen his skills with easy stuff. Also, he needs to learn how to play the game with little or no vision (he could see back when we did nosework in the past).

I'm going to show a video of R doing nosework. We are doing a game where I have several boxes. Only one of them contains the target scent (birch). R needs to "alert" on that one by keeping his nose on it for long enough to tell me that it's the target box.

As you watch, the box with a piece of masking tape on top is the target box. Excuse my silly clothing - I'd just come inside from a snowy and cold bike ride! Here's the video.

You can see R's enthusiasm. He loves this game. I am so happy that I've found something that he loves to do even on days when his body hurts too much for running.

We are adapting and finding ways to keep R happy. Happy Black Dog Sunday.
Posted by KB at 4:00 AM