A Pair of Golden Eagles at an Elk Carcass

Sometime last week, a cow elk was killed in the forest nearby. When I find a carcass like this one, my first reaction is feeling sad for the beautiful animal that is dead. I think about whether she had offspring and how the death happened.

My melancholy is always helped by realizing how much life will come from the dead animal, especially in the middle of the winter. The body becomes a hub for scavengers, who seem to see it as a gift from the heavens. Within a week, the carcass will be down to bare bones. Nothing is wasted.

This time, I felt very fortunate that a pair of Golden Eagles fed on the body. These are magnificent birds. They weight up to 15 lbs, and their wingspans are around 6-7'!

Here is one standing on the elk carcass. The rib cage of the elk looks small by comparison to the eagle. 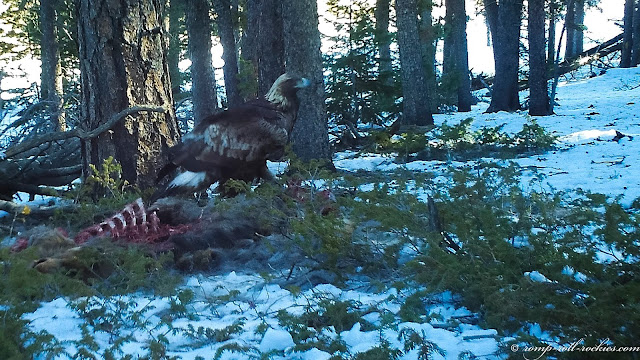 I've seen single Golden Eagles at elk carcasses near here before but I have never seen two Golden Eagles! In this photo, a second Eagle had just descended from the sky almost on top of the one who was feeding there. I know that it's hard to tell that there are two - but it will be obvious in the video. 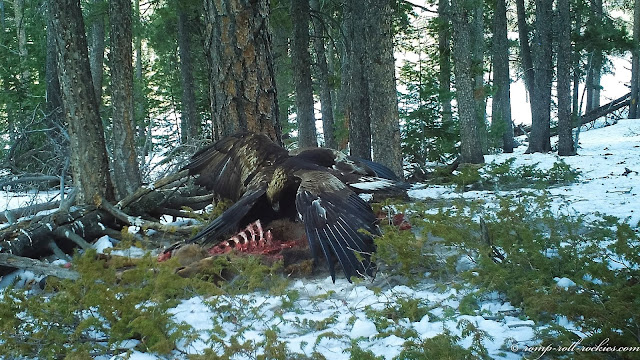 When I saw two Golden Eagles, I jumped to the conclusion that they were a mated pair but, as you'll see, they didn't behave as cooperatively as you might expect.

Check out the video if you have time!