Almost Wordless Wednesday - The Lion Moon Sets over the Mountains

This month's full moon was obscured by clouds when it rose and set for two days in a row. I decided to try once more to photograph it as it set over our mountains after the official full moon had passed. As Shyla and I pedaled out of our clearing early in the morning of that day, I was certain that the moon wouldn't be visible because I could see the pinkish glow of a cloud bank over the Continental Divide.

But, as long as we were up early and out on the trails, it seemed worth taking a look. My studded tires crunched on the hard pack snow as we made steady progress toward my favorite lookout point. We crested the ridge and coasted downhill toward the exposed western view.

As the moon came into view, I gasped and said "wow"! I didn't have much time to set up my tripod and my camera before the moon set below the clouds. Meanwhile, I was also supervising Shyla so she stayed very close (I worry about wildlife early in the morning).

I managed to get everything set up while the moon was still barely above the orange-pink cloud bank. 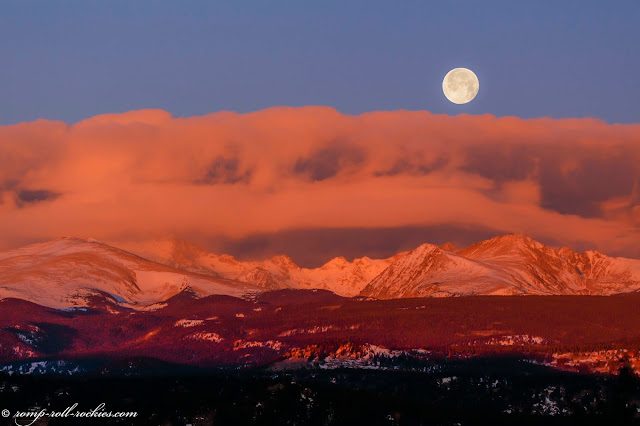 And, it was worth keeping Shyla close as we watched the beautiful moonset. My trail cam showed a mountain lion was in our neck of the woods as I photographed the moon. I know that this full moon was officially called the "Wolf Moon" but I'm calling it the "Lion Moon".
Posted by KB at 4:00 AM