I love full moons, as many of you know. When a full moon sets over our mountains, it is simply gorgeous. May actually featured another super moon, so I was excited about seeing an extra large full moon.

I always get up super early to try to see the full moon set. With the early sunrise of May, I set my alarm for 4:30 AM this month. Because the moon sets further to the south near the June solstice, I rode to a different viewpoint that allowed longer views to the south.

It's a big climb up to the viewpoint. I pedaled hard through the murky darkness, not wanting to arrive after the moon had already set. As I got close, I could see the clouds drifting near the moon. I really didn't want to be late after awakening so ridiculously early.

When I arrived, the moon was indeed behind the clouds but the clouds were moving. So, I thought that there was a chance that it would peek through before it set. I set up my tripod, got my exposures dialed in, and waited. While I waited, a Hermit Thrush landed near me and started singing. His song is my favorite on Earth so the morning was totally worth it as I listened to him in the pre-sunrise world.

As he kept serenading, the moon did peek through. 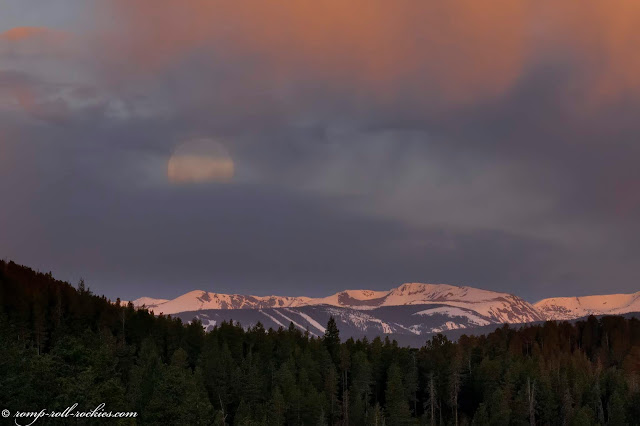 To say that I was happy about my experience that morning would be an understatement. I always wonder about my sanity when I set my alarm super early for these outings. However, I rarely regret them.

Thank you, Mother Nature, for helping me to keep smiling.
Posted by KB at 2:00 AM