You may remember that I started preparing for a potential coyote den cam last fall. I set up trail cams at a site that ranchers and other locals said that coyotes liked to use to raise their young. I set the cams up so early because coyotes are renowned for noticing small changes in their environment. I wanted them to be used to the cams by this spring when it was time for pups to be born.
I stayed away from the site for weeks after the time when coyote pups were due to be born. Finally, for logistical reasons, I had to go to the cams. As I approached, I noticed marmots all around the den. I thought "that's odd - you'd think that they'd be afraid of coyotes". I stayed still to watch them, and I realized that the underground den must be occupied by marmots this year.
Indeed, I was right. For some reason, the coyotes chose to den elsewhere, and the marmots moved into the den. At first, I was disappointed. Then, I realized that marmots are pretty cool. They are highly social animals living in groups, and they are probably raising young inside that den. They live for a very long time, 15-18 years. That's exceptional for an 8 lb animal.
Marmots are so cute when they play. They are like fat wrestlers who love to stand on their hind paws and face each other down. 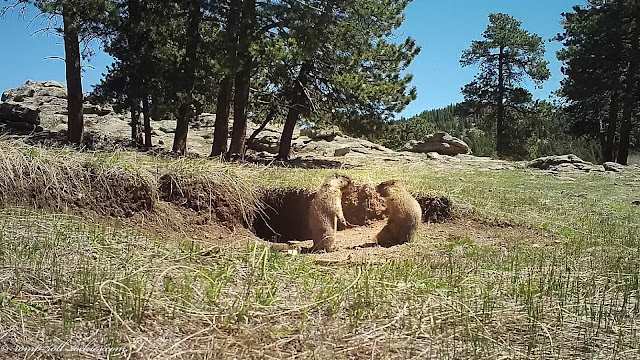 Then, one animal ends up on his back. The other lets him back up, and they start all over again. 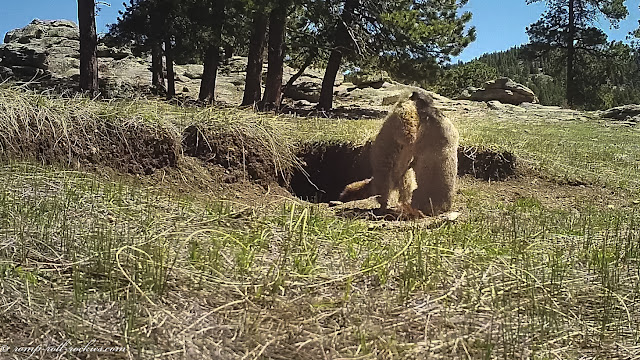 I'm not sure if I'll be able to keep a cam here to see their young who haven't emerged from the den yet. It's grazing territory, and cattle season is upon us. No matter what, I am nothing but grateful that we had the chance to catch a glimpse of the private lives of these animals.
That's the best part of trail cams - you get to see animals behaving as if no people are watching. In contrast, with a handheld camera, the animal is almost always aware that a person is nearby - and they don't behave naturally.
If you have time, check out this short video of the marmots playing!
Posted by KB at 2:00 AM