A calendar of K photos

At the end of 2011, before K's cancer diagnosis, I made a calendar of my favorite 2011 photos of her. I thought that I'd share them with you. I've included a short story about where the photo was taken and why it was significant to me. The photos are not necessarily my best photos, purely in terms of their artistic features. Rather, they're the photos that mean the most to me for sentimental reasons.

This was the cover photo. I took it on a warm and gorgeous autumn day when I knew that we were all about as happy as we could be. 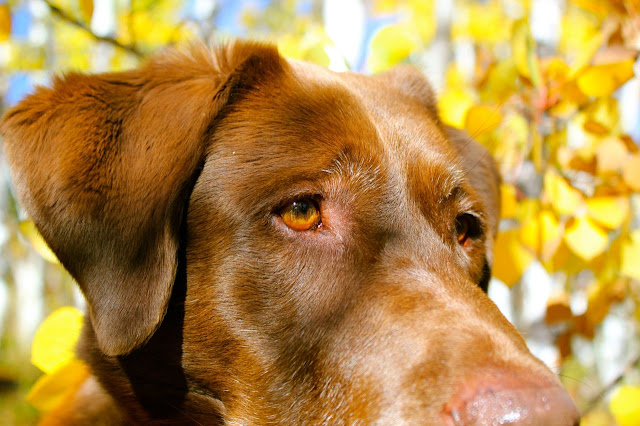 January, 2012: I took this photo last January near the end of K's convalescence from having a toe amputated. We'd gone on a long snowy hike, following the paw tracks of a mother mountain lion and her kitten. After we left their tracks to head home, K rolled joyfully in the snow. 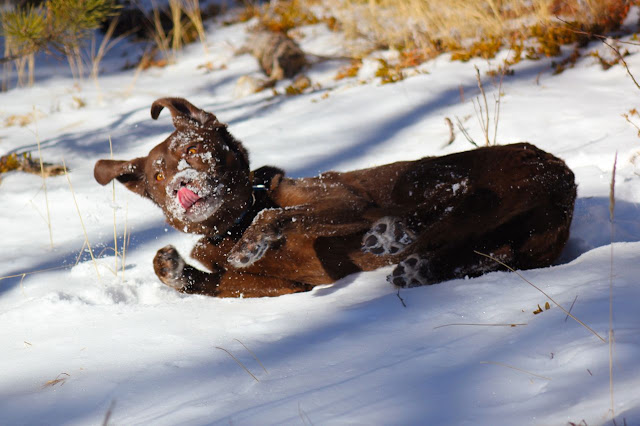 February, 2012: I chose a photo that I took of the Duo during an evening hike last February. The sun was setting and a bare aspen grove stood behind them. 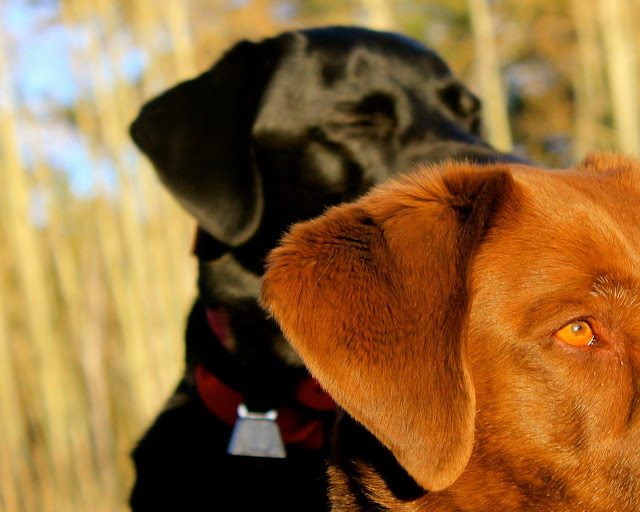 March, 2012: I made this photo at sunset in a canyon near Moab. I love how K's fur and the red rocks go together. I also love the memory of a wonderful warm week in the canyons of Utah. 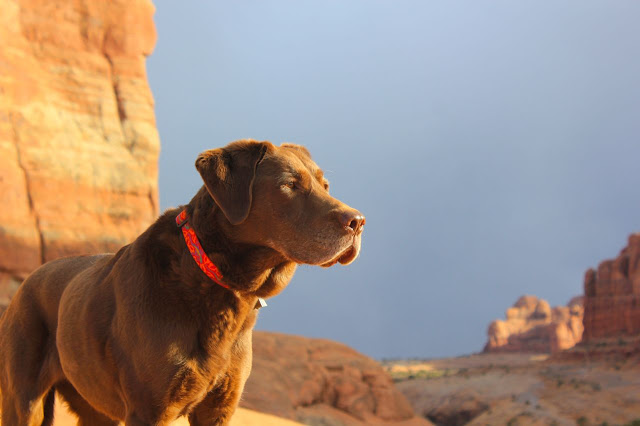 April, 2012: I chose a sunset photo from April of last year in "our backyard". K and R had been romping on a hillside in the evening. I caught this photo of K happily prancing through the golden grass in the sunset light. 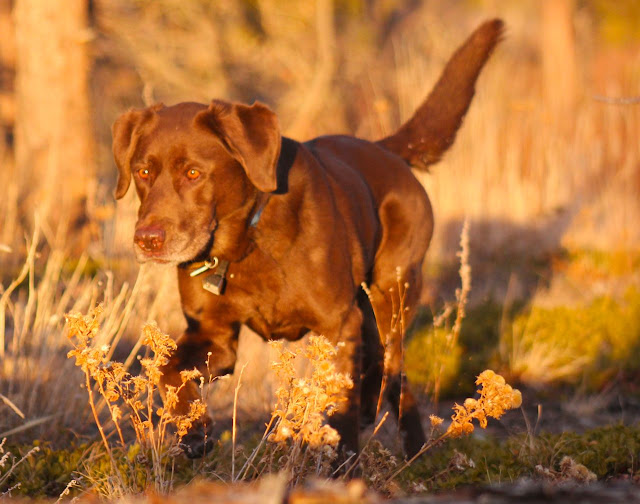 May, 2012: I chose a photo from our spring trip to the San Rafael Swell in Utah. We spent an evening on the rim of the Little Grand Canyon, watching the sunset play out over the deep canyon. K looked beautiful in the evening light. 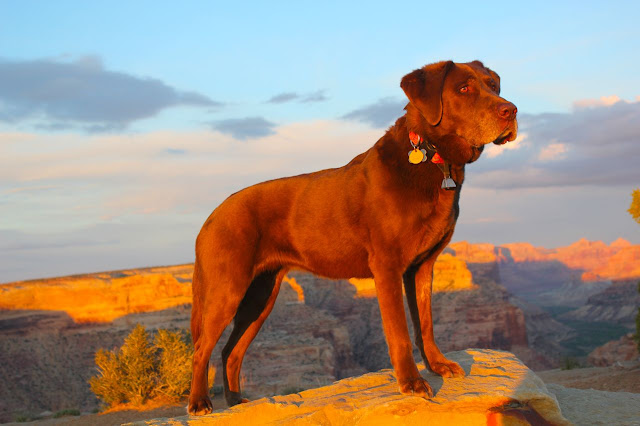 June, 2012: I chose a photo of K galloping through a meadow near Marshall Pass in Colorado, with Golden Banner flowers blooming all around her. K was recovering from a kidney infection, regaining her strength as we spent our mornings wandering through wildflowers during a long vacation in the high mountains of Colorado. July, 2012. K romped through a meadow near our house with purple flowers all around her. Ah, I love the memories of the happy and healthy days of Summer! 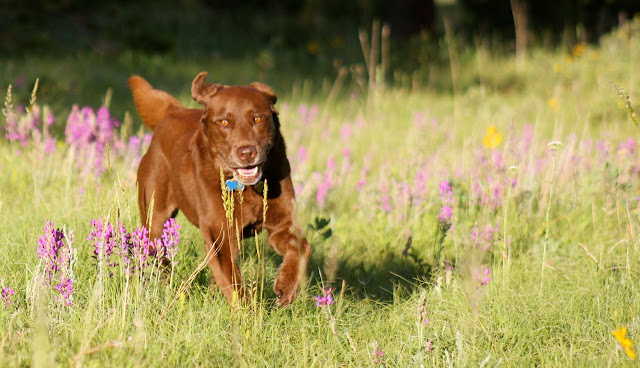 August, 2012. I chose a photo from a glorious hike that K and I took up high in the mountains near our home. The photo was taken at about 13,000' looking down over a string of emerald alpine lakes. 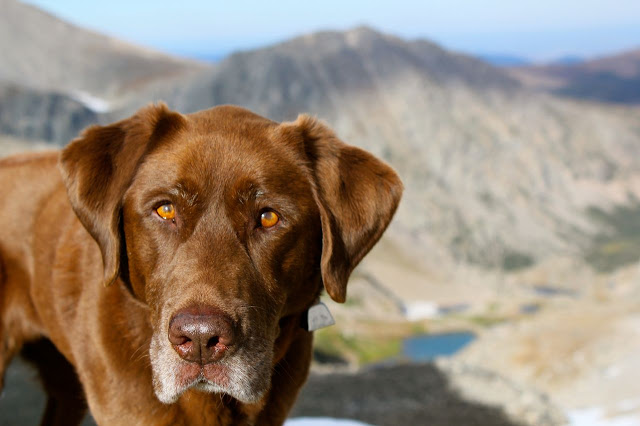 September, 2012. I chose a photo from K's 8th Birthday hike to Dog Leap Lake. Ah, what a wonderful hike our whole pack had that day! The two dogs romped and frolicked in the clear mountain lakes. 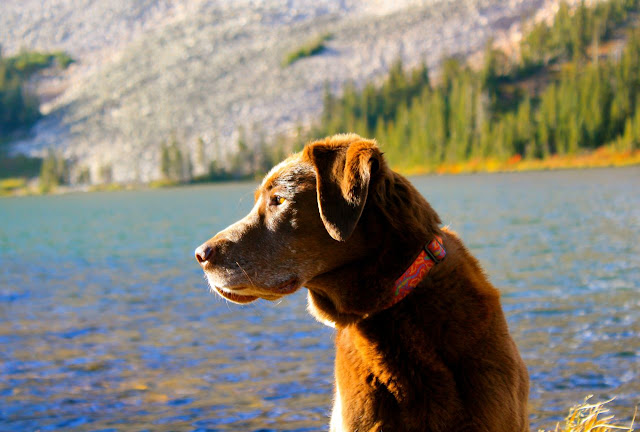 October, 2012. I chose a photo that highlighted one of my favorite sights - K's golden eyes and the golden leaves of aspen trees surrounding her. This photo was taken in "our backyard". 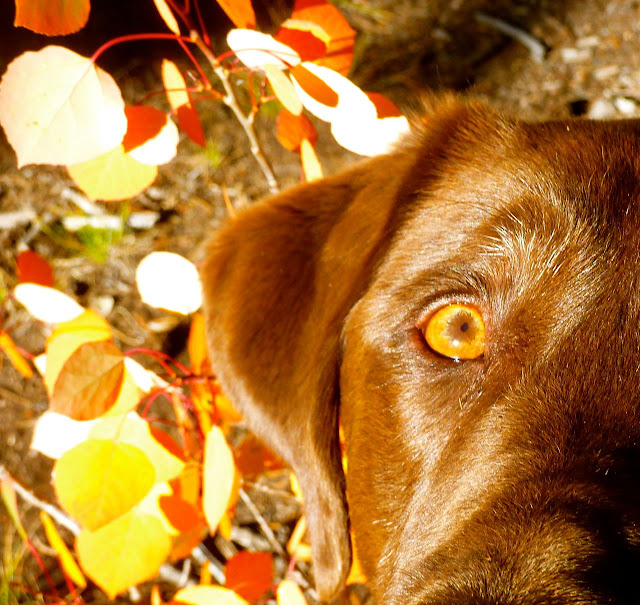 November, 2012. I chose a photo from our November, 2011 trip to the land of red rock canyons. We went to Dead Horse Point State Park so that I could photograph a spectacular sunset. The red rays from the setting sun set K's fur ablaze! 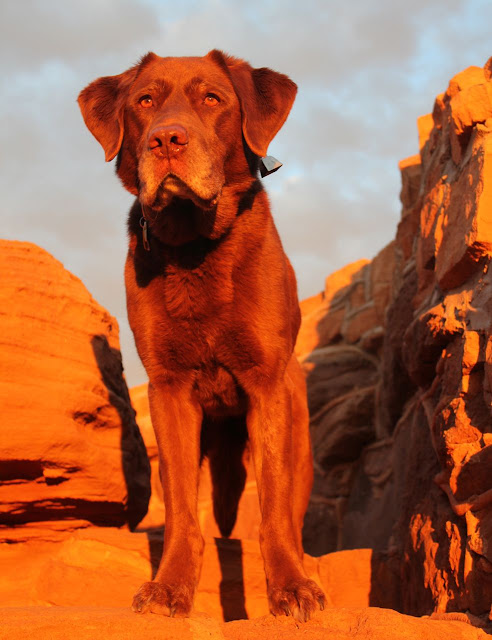 December, 2012. Traditionally, K and I try to be out at a vista point for gorgeous December sunrises. I chose a photo from a sunrise snowbike ride. Little did I know that it might have been one of our last bike rides together. Wonderful memories. 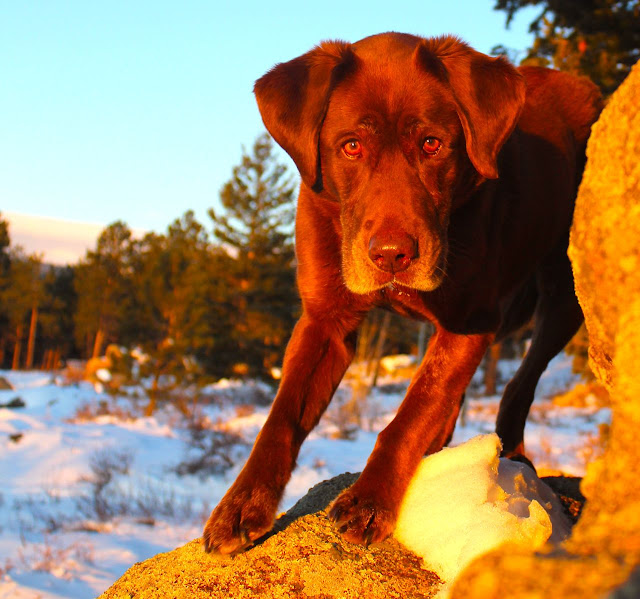 In retrospect, my favorite photo of the year is one that wasn't included in my "K Calendar". I titled it "The Power of the Paw". At the time that I made the photo (early December), I had no idea how much we'd need and appreciate the Power of the Paw in a few short weeks. 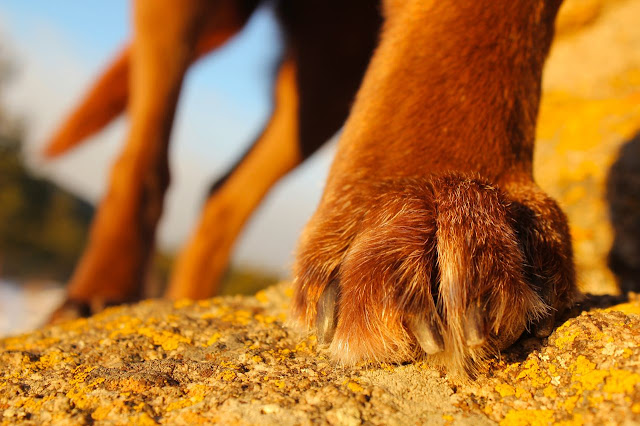 I'm so happy to have this calendar hanging on my wall!
Posted by KB at 7:30 PM