K is well, and the wildlife return

K had another good day of treatment. She came through her anaesthesia and steriotactic radiation therapy fine today. Tomorrow holds the final radiation treatment and the first round of chemotherapy. I'm a bit scared of the chemotherapy because of the side effects. Hopefully, K will tolerate it without too much trouble.

Today was very warm and felt like springtime. I found myself having my knee-jerk yearning for true spring and then realizing that I don't want time to move quickly, even if spring is beckoning. I want to savor every day with K - winter, spring, summer, and fall - who cares which season it is? Not me.

A side-effect of K's cancer is that R and I have been spending time alone together out romping on our trails, which is unusual because R normally exercises with the Runner every morning. This morning, R and I took a snow bike ride together. He's a different dog, very focused on me and playing with me, when he's not vying with K for my attention. I think that I need to find "alone time" with R regularly, if and when life returns to normal.

We headed onto the trails a bit later than K and I usually do, primarily because I don't quite trust R in the twilight before sunrise. We arrived up high in full sunlight, and he looked stunningly handsome with his jet-black fur bathed in golden sunshine. 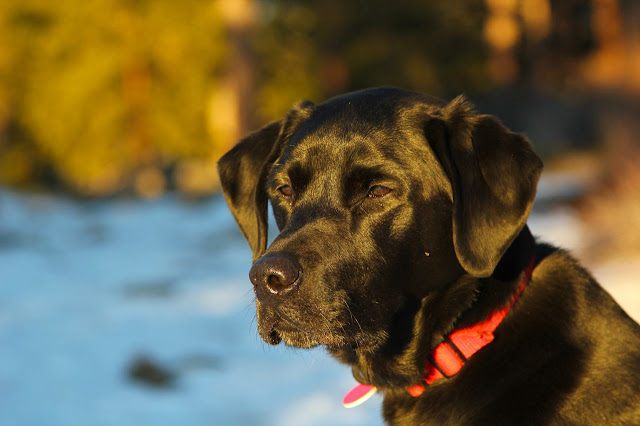 I asked him to stand on the boulder where K often stands at sunrise. He maintained a regal composure for a few seconds. 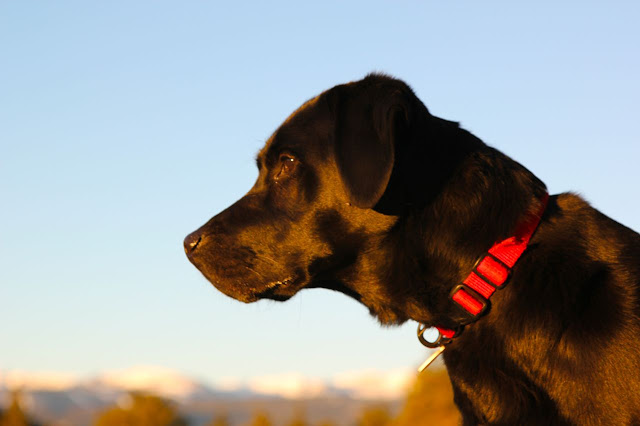 Then, he decided to tell me very loudly that he prefers ACTION over looking regal. He barked at me from his perch. 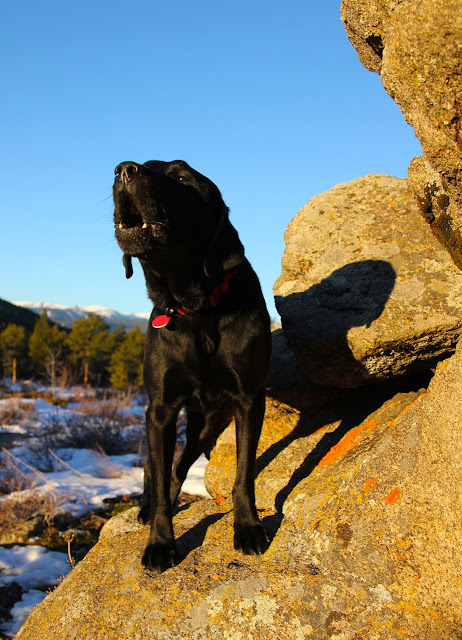 So, I barked back at him and added a howl for good measure. Look at his reaction. Puzzled, I think. 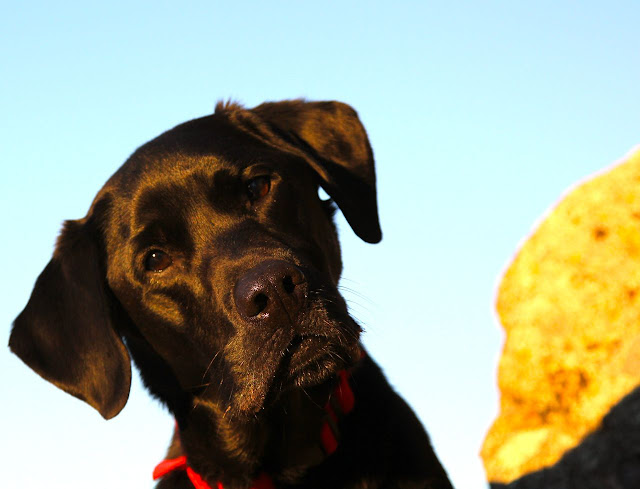 We enjoyed a good romp, with his enthusiasm and magnetic personality distracting me from my worries.

R also enjoyed sniffing the scents of the many animals who have recently returned to our neck of the woods after fleeing the onslaught of snow in December. Since some of you asked, the last photo of yesterday's post was a "Spotted Skunk", a very small skunk compared to the more common Striped Skunk. A Spotted Skunk is not much bigger than a large squirrel and lives primarily in the mountains. Skunks tend to spend the coldest part of the winter in a den hibernating. I've read that one den might contain many skunks hibernating together. That's quite a vision (I hope that my dogs never find a skunk den...). This skunk probably ventured out because of the relatively warm and good weather.

Like most winters, the animals have discovered that our driveway is a good place for foot travel in snowy weather because it's plowed. This coyote was running from me. I'd just come out the door, unaware that a coyote was walking on the driveway. I spotted him as he ran away in a blur.

This buck, with one broken antler, ventured down our driveway in the wee hours of the morning. 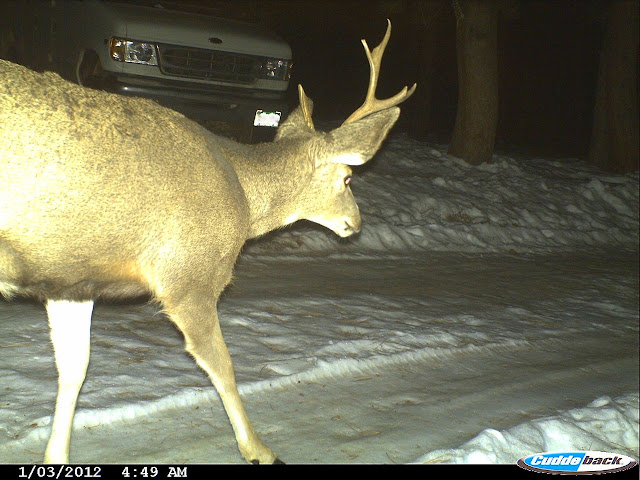 And, my favorite, the bobcat, has been in our clearing several times. I don't know if this is one of the mother-kitten pair or a solo bobcat. He/she looks too big and muscular to be the kitten.

I also captured photos of a bobcat on a tiny path leading out of our clearing. Before it snowed, I noticed that a bobcat had been scraping the ground and defecating on this path regularly - a way of informing other bobcats that our clearing was his/her territory. So, I staked out the tiny path with a trail camera. The bobcat first sniffed the "scentpost" spot where I'd seen the bobcat markings previously. 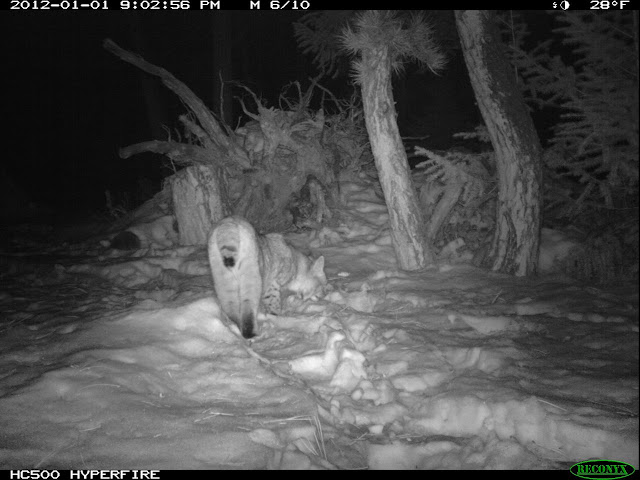 Perhaps due to the snow, the bobcat didn't add any of his own scent to that particular spot. But, slightly further along, he rubbed his side against a log. Then, he raised his tail, as if to urinate, but he appeared to rub his hind end against a stump with his back arched upward in a posture that reminded me of a housecat. This isn't a marking behavior that I've ever captured before. He promptly departed after "marking" the stump. Have any of you seen or read that bobcats mark territory in this way? 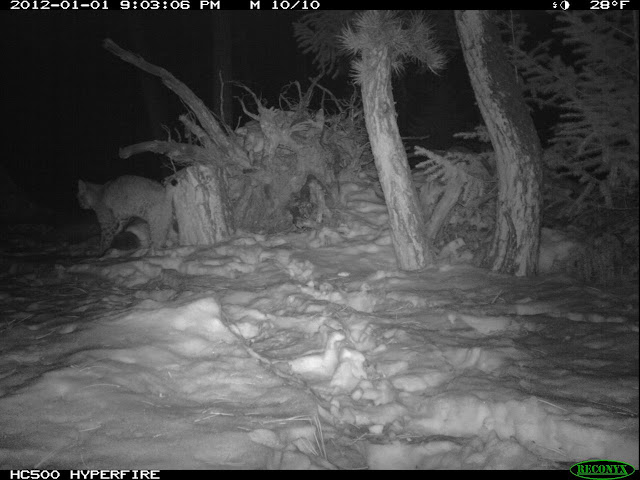 I love having bobcats in our clearing. They're so full of toughness and life.

I'll let you know tomorrow how K's treatments went. I can only imagine that, after three days in a row of general anaesthesia and radiation and then one round of chemotherapy, she's going to be very tired. We promise to pamper her and tend to her every whim.
Posted by KB at 6:00 PM