Countdown and our bobcat

I am enjoying reading the amazing posts written by so many generous people for my K. I'm still reading... and I think that I will be reading for a while! You've written so many beautiful thoughts that will sustain us through thick and thin.

I feel like we're in a familiar countdown now. K's next round of chemotherapy is on Friday so we are making the most of these days. It's a bit silly because she's handled the previous two rounds so easily... but I still try to have as much fun with her as possible during the countdown days.

Yesterday, we had a true bluebird winter day. The skies were cobalt blue and the air temperature never broke freezing. I adore those classic winter days. The snow is becoming easier for animal travel, including our dogs. In the photo below, K had been walking atop the snow crust and had just started falling through. 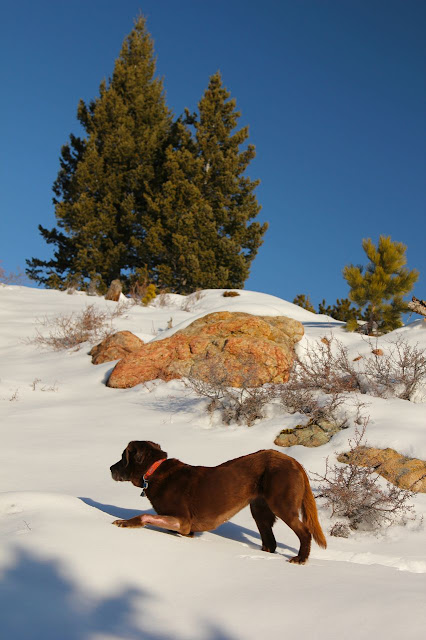 We took advantage of the great conditions to track a bobcat. The bobcat had walked atop the snow, and, in the photo below, he walked straight into a cavity under the rocks. I wonder if he curled up in the mini-cave for a while, perhaps sleeping during the day. 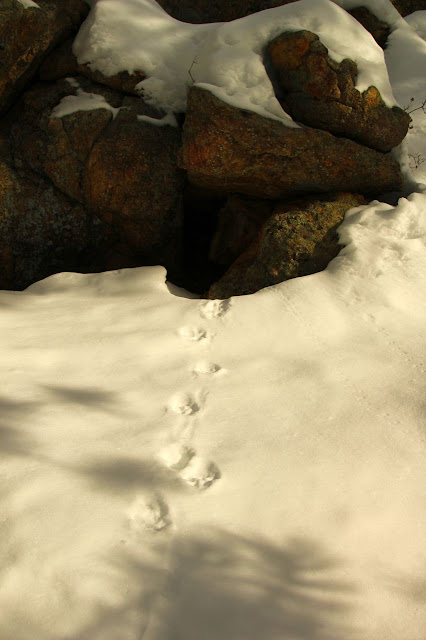 K and I have a long history of tracking animals together. She loves doing it, and she has even learned that she needs to stay behind me until I tell her that it's okay for her to go ahead and sniff the tracks. With this simple rule, I can look over the untrampled tracks before K tromps on them (but she gets to have the fun of sniffing them too). In the next photo, I'd given her permission to sniff the tracks. 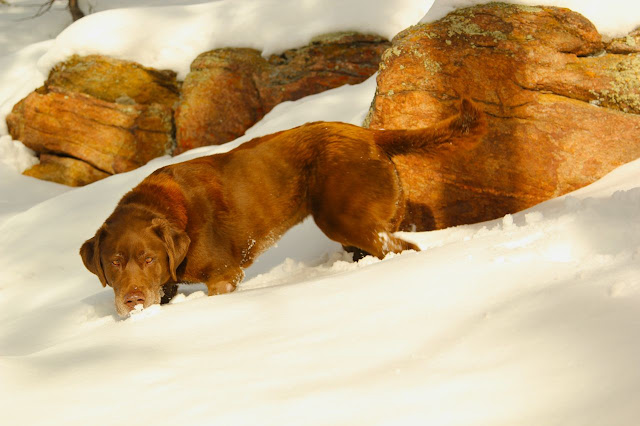 She paused to listen to the sound of a woodpecker drumming during her sniffing. 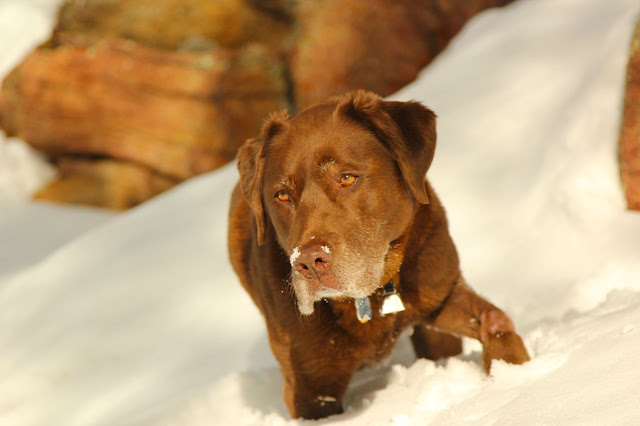 Soon, we returned to the packed trails and she walked ahead of me. She often stops and glances back at me, wondering why I'm so slow! 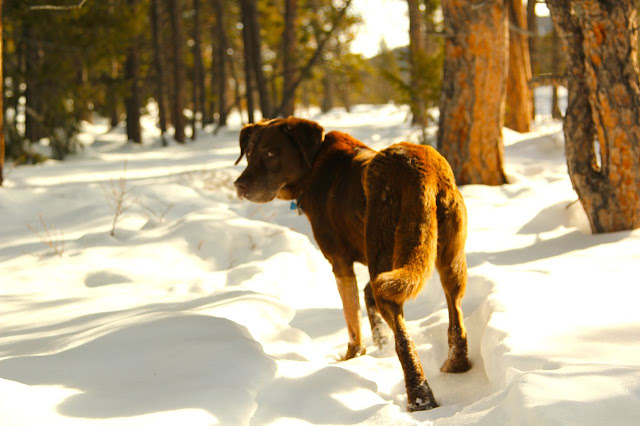 As we walked toward home, she explored off trail and then romped back to me. I grin ear-to-ear when she looks so happy in the woods. Every day that K is gleefully romping in the forest is a gift. 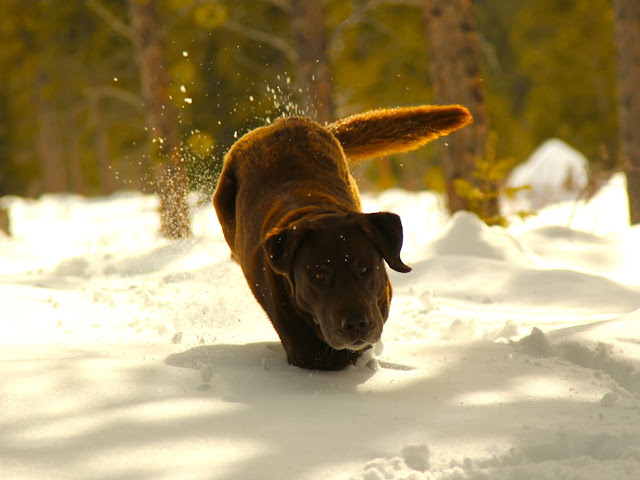 After leaving the deep snow, she always shakes the snow off her fur... She looks like she's dancing in this photo. 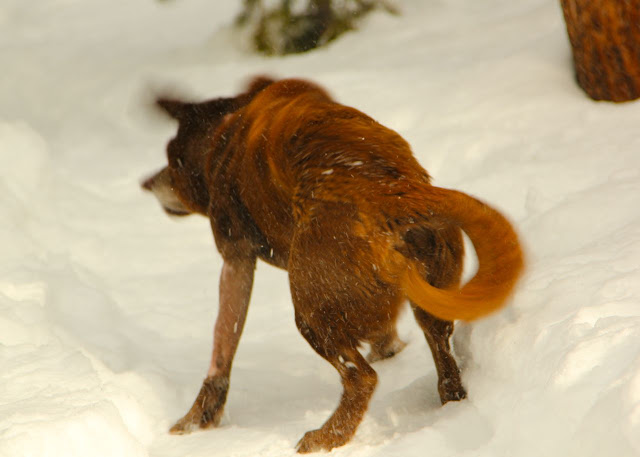 On that day, we were following the tracks of the bobcat that my motion-activated wildlife camera photographed recently. It's rare to get daytime photos of a bobcat so I was thrilled to see these ones!

He arrived in front of my camera, staring down toward a trail used by humans. 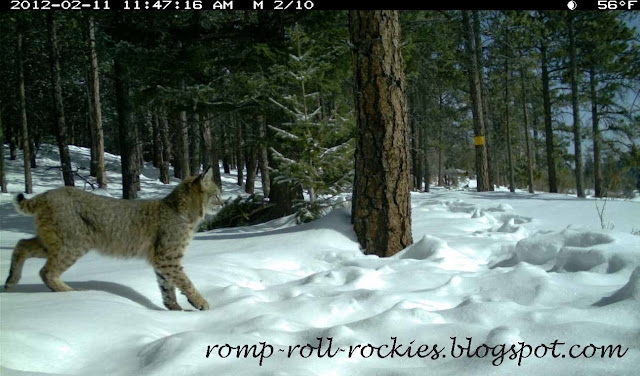 After a long pause to check for people (I'm guessing), he walked out into the open, in full view of the distant trail. 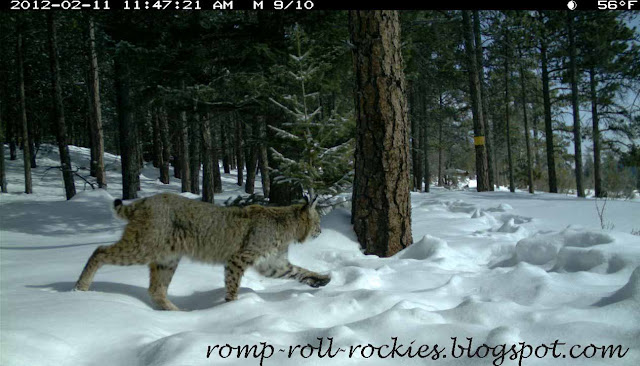 K and I followed his tracks, and he explored around some fallen trees where rabbits like to live on an open slope. Then, a minute later, he circled back to the forest's edge to stand in front of my camera again. He stood there for a moment, and then he "marked" a tree with his urine. My camera caught him in the act. 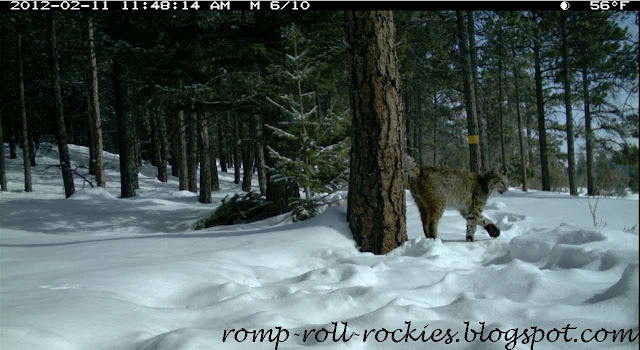 It appeared that he wanted to go back out into the open. Again, he stood for a long time scanning the trail below before he descended toward it. This time, he boldly walked down the slope and directly across the trail, disappearing into an aspen forest below. I know what he did based on his tracks in the snow. 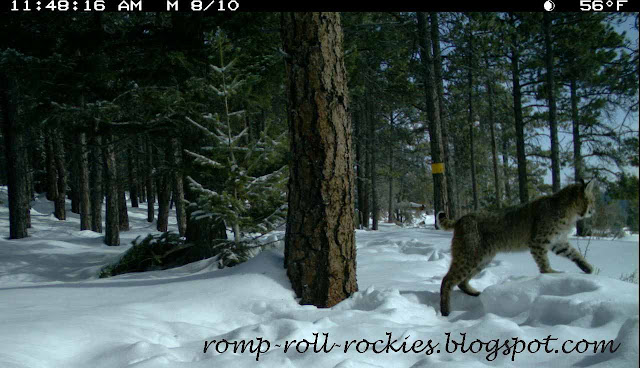 I'm generically calling this bobcat a "he". However, we followed a bobcat mother and kitten all summer via my wildlife camera photos, and it's possible that this bobcat is the mother who has, by now, sent her kitten off on his own. She's probably preparing to breed again. Maybe we'll have another kitten or two to follow this summer!

Now, I'm going to continue reading the wonderful posts in honor of K. What an amazing gift! We all thank you! 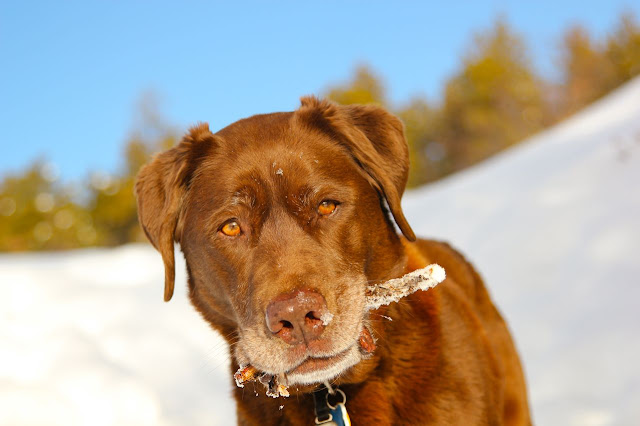