A snowy hike in nirvana

After days of gray snowy weather, yesterday dawned crystal clear, sunny, and very cold. The four of us headed out onto the trails together, continuing to break trail through our seemingly bottomless snowpack. There is one packed path through our forest, and, as long as the dogs stay on it, they stay above the snow.

They paused in the path so that K could tell R a secret. 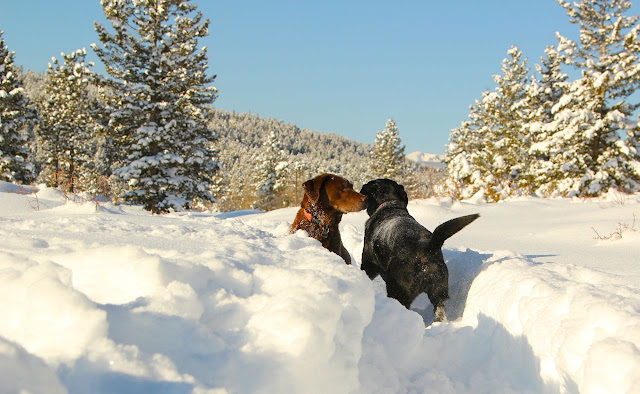 I expected that R would venture off the trodden path, using his porpoise-like bounding gait that he reserves for snow that's deeper than he is tall. 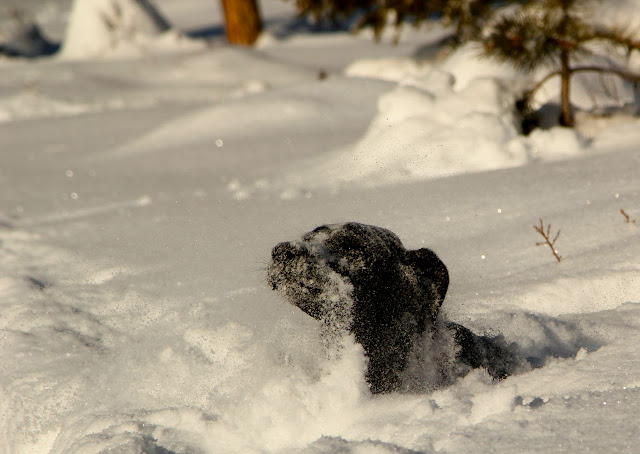 He made us laugh with his antics as he explored the "off-trail" areas. His head would pop up out of the snow like in the photo below. 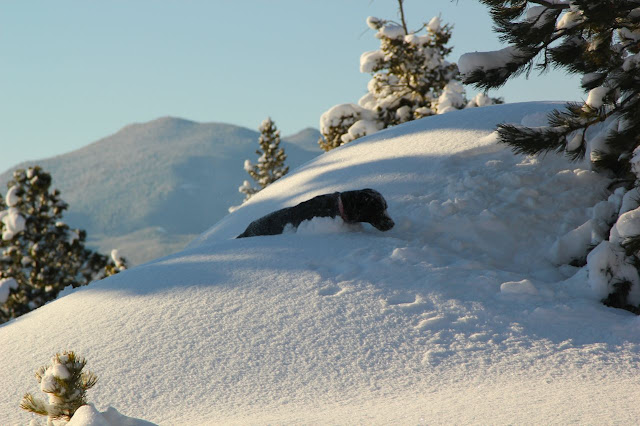 Then he'd disappear below the snow when he landed, making me wonder if he'd "drowned" in the snow. The photo below was taken a split second after the one above. R was under the snow with just a hint of black showing. 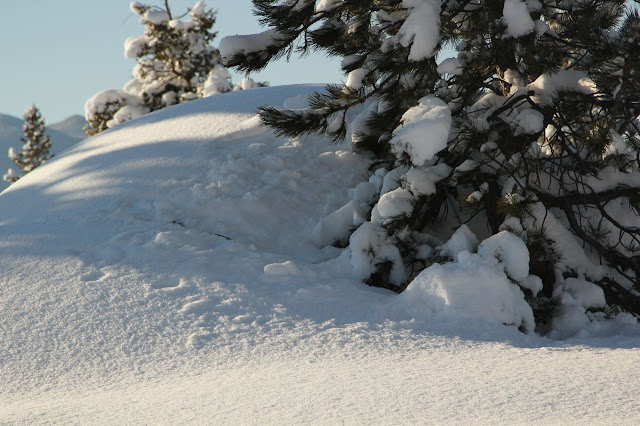 To my surprise, K also chose to romp in the deep snow. She seemed full of energy and ready to play. Although the vet told me that deep snow was more dangerous than normal terrain for her leg bones that had tumors in them, I bit my tongue as I instinctively wanted to tell her to stop. It's time to live. 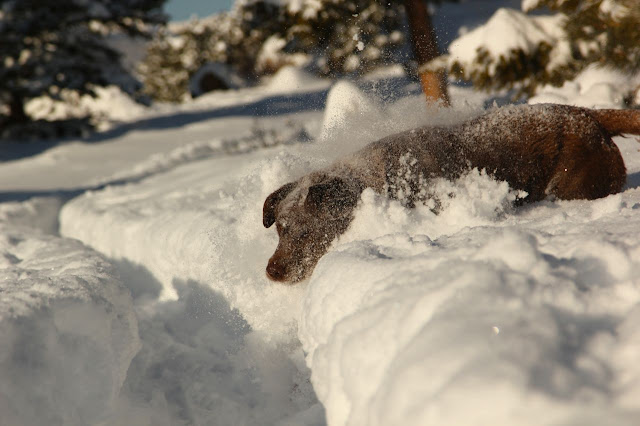 More than once, K burst out of a snowbank in a blizzard of white, clearly having been totally submerged in the snow. 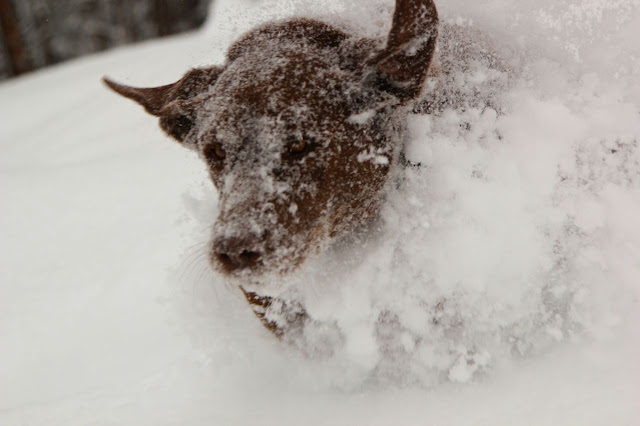 While we were out in the winter playground, K played with happiness, and we smiled along with her. Every day is a gift. 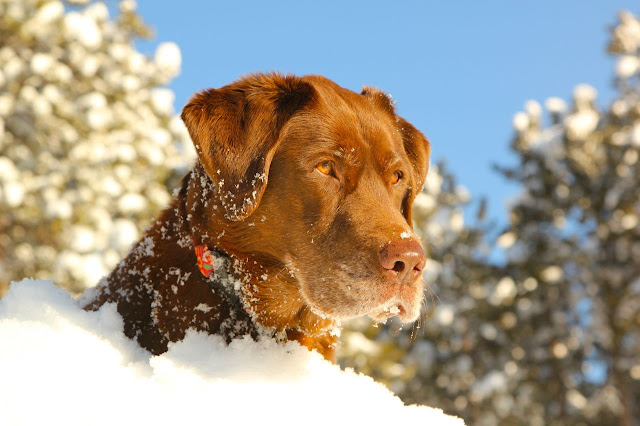 Each phase of our lives has been defined by the dogs whom we shared it with. Now, we are in the K and R phase, and I love seeing them together. They're so different from each other, and they make for a zany pack. 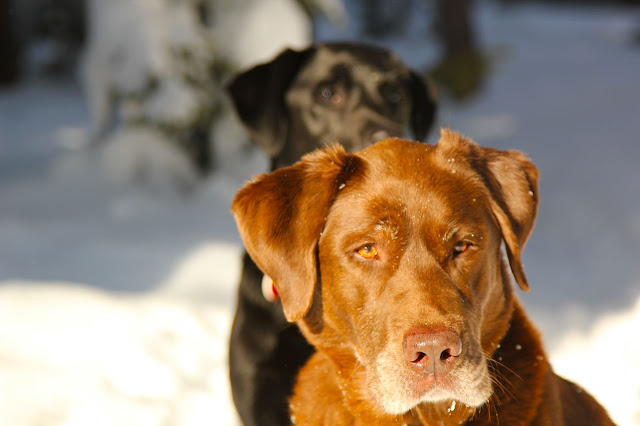 After being out in the intense winter sun for a while, it was, regrettably, time for our zany pack to head back toward home. 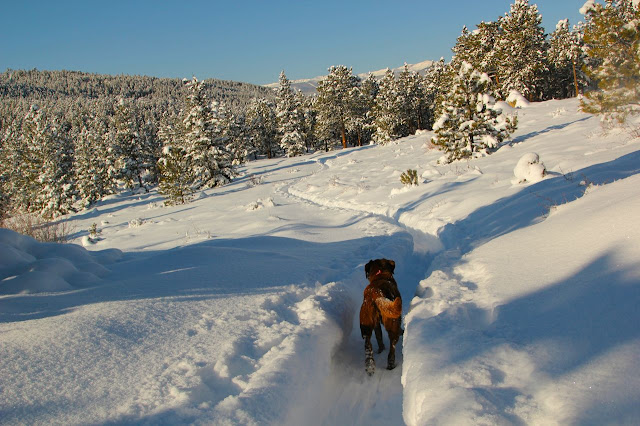 As we dropped down into the forest, the sun had warmed the trees so that they were dropping snow bombs, leaving a shower of glittering flakes in their wake. 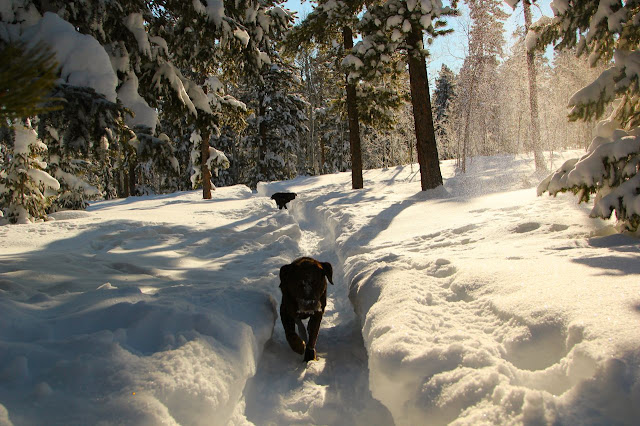 Our hike felt like nirvana. K is still strong and able to romp with abandon. R is a wonderful nutty dog who makes us laugh at his antics. The Runner and I feel lucky to have this Duo in our lives.

A wise friend told me to try not to "see cancer" when I look at K but to see her spirit glowing. It was glowing intensely on Sunday. 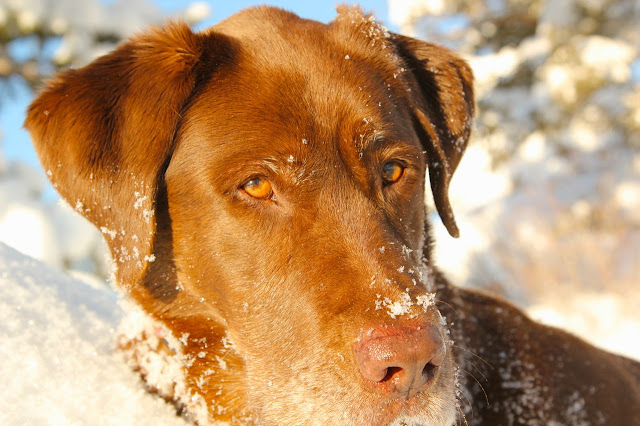