It's ironic - K has cancer but some days I'm the one slowing us down. She was ready to romp this morning! She especially loves our hikes these days because they're the only times when she can take off the "cone of shame". I can imagine that she might like to hike continuously all day to avoid having to wear the cone. I wish that I had the spirit of K! 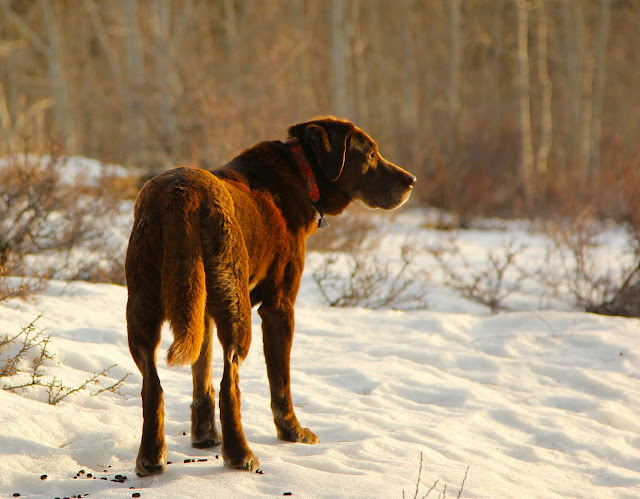 Getting out into the sunrise light is a motivator for me, and we briefly saw the sun shine this morning. 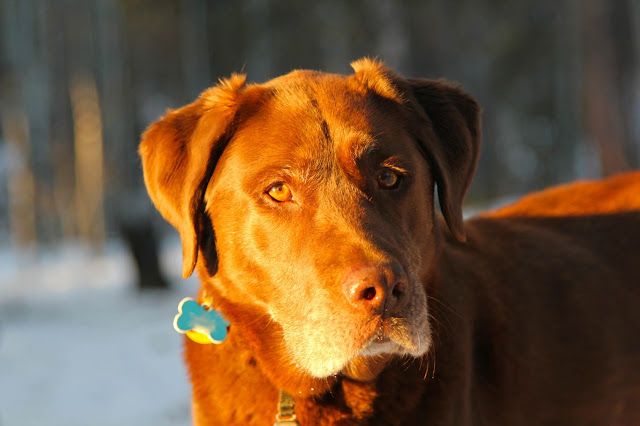 K explored and reveled in the morning as I plodded along behind her. You can almost see in this photo that her radiation burn on her left forelimb is healing thanks to the medicines and the cone to protect it. 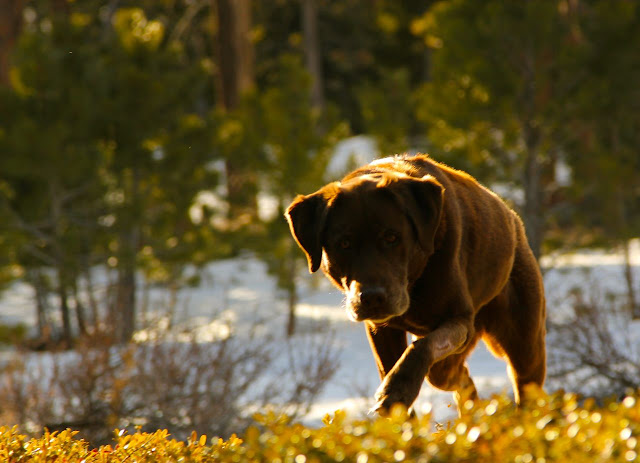 For a long time, K has acted as an unofficial "service dog" for me. I've had unrelenting spine problems for as long as I can remember. After one of my spine surgeries, I trained K to help me with some everyday tasks. For example, I was unable to reach the ground for months after the surgery, which led to some difficult situations when I dropped things. I trained K to respond to "Oops!" as a cue to pick up whatever I'd dropped and give it to me.

As we hiked today, I dropped my hat by accident. K was ready to help! 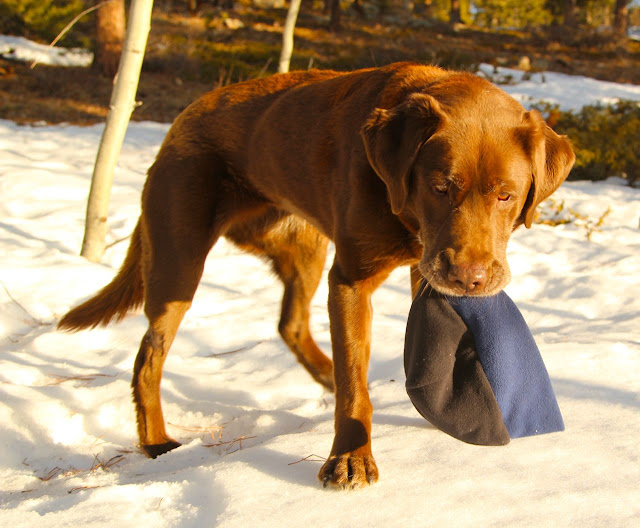 She seemed to say "Come on, take it!" as I took her photo. As she held my hat and looked at me imploringly, the thought flashed through my mind that I have no idea how I'm going to find my way without K's amazing spirit to lead me, when that dark time comes. 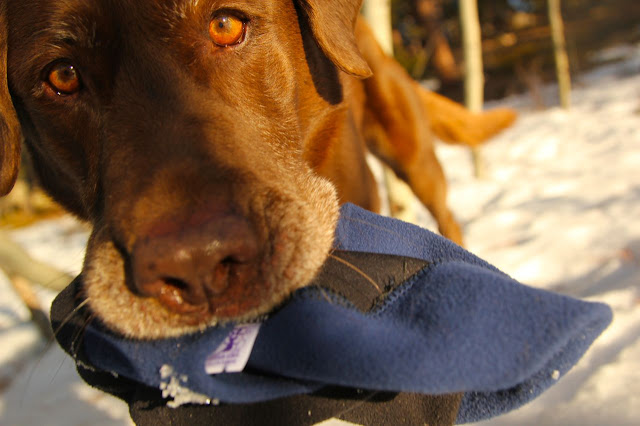 I actually was grateful for her help with the hat. I had procedure on my back yesterday that left me sore and tired. K could reach the ground far more easily than I could this morning! My back is now happier... I rode my snow bike on trails today which always eases the back spasms and pains.

K and I checked a couple of trail cameras during our hike and discovered some activity. A group of six mule deer does passed one camera where the snow had melted, leaving easy terrain for walking. 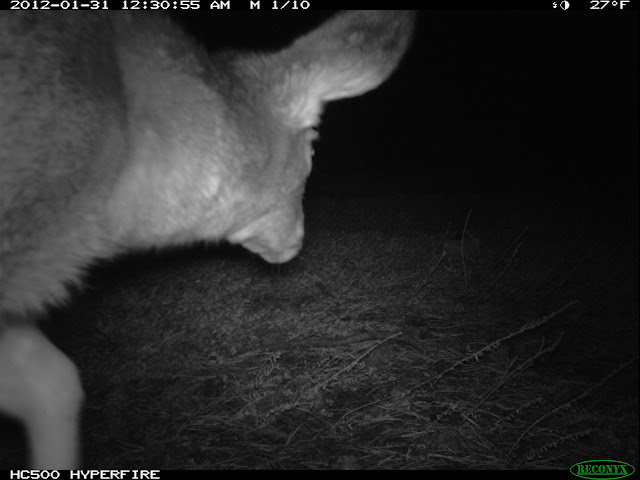 A bobcat hunted under our bear-proof birdfeeding station. 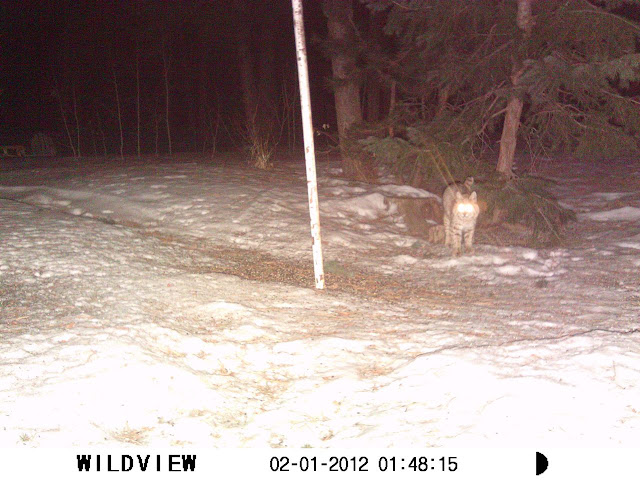 And, a coyote made a fearsome face while approaching our birdfeeding station. I'm guessing that another coyote was just outside the camera's view wilting under the ferocious stare of this coyote. 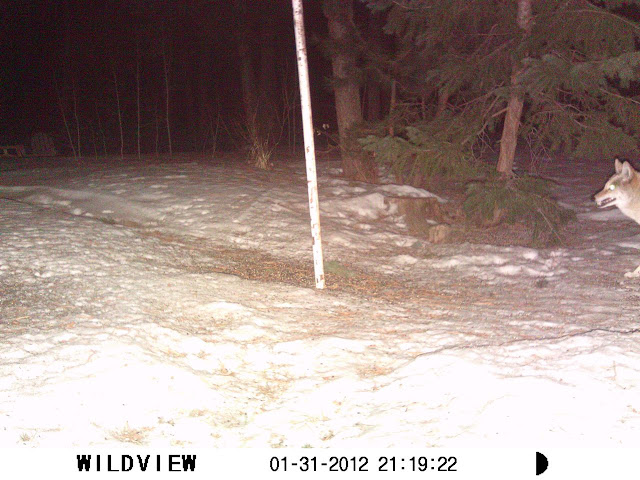 I believe that the female wild canines are currently in heat... probably leading to higher tensions among their ranks and the snarling face in the photo. I'm basing this on the observation that a female coyote urinated in front of our "birdfeeder trail camera" the other night. The urine spot was dark crimson with blood. The next morning, the spot drew R like a magnet, and he rolled in it. 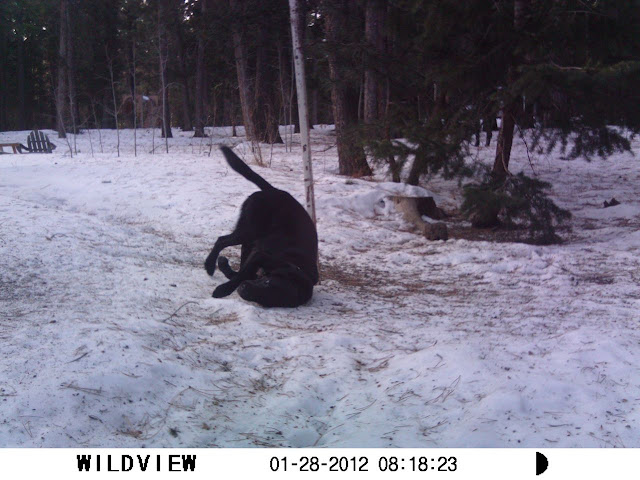 I looked back through my journal and saw that the coyotes were leaving bloody urine at about this time last year. Their gestation period is 9 weeks so pups would be born in early April, just in time for the start of warmer weather.

Yes, signs of springtime, including coyotes being in heat, have abounded for the past few days. Now, a snowstorm is moving in, and the woodpeckers will stop drumming, the chickadees will stop singing spring songs, and the robins will retreat to lower elevations. The Labraduo will have a blast romping in the snow. 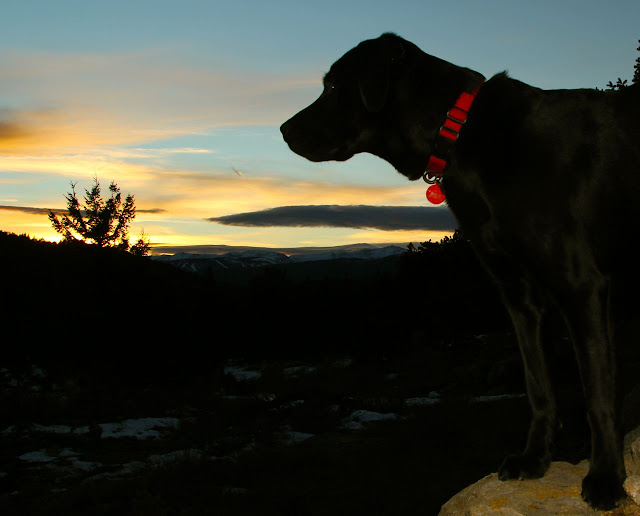 I'll try my best not to be overprotective of my K in the snow. It's time for her to live joyfully and for me to follow her lead.
Posted by KB at 7:09 PM