The world of slickrock

The new campsite that I told you about moving to in yesterday's post was a land of rock, including on the ground. The ground was mostly slickrock so the dogs had to wear their boots. Paw pads rapidly get sore from running on rock. 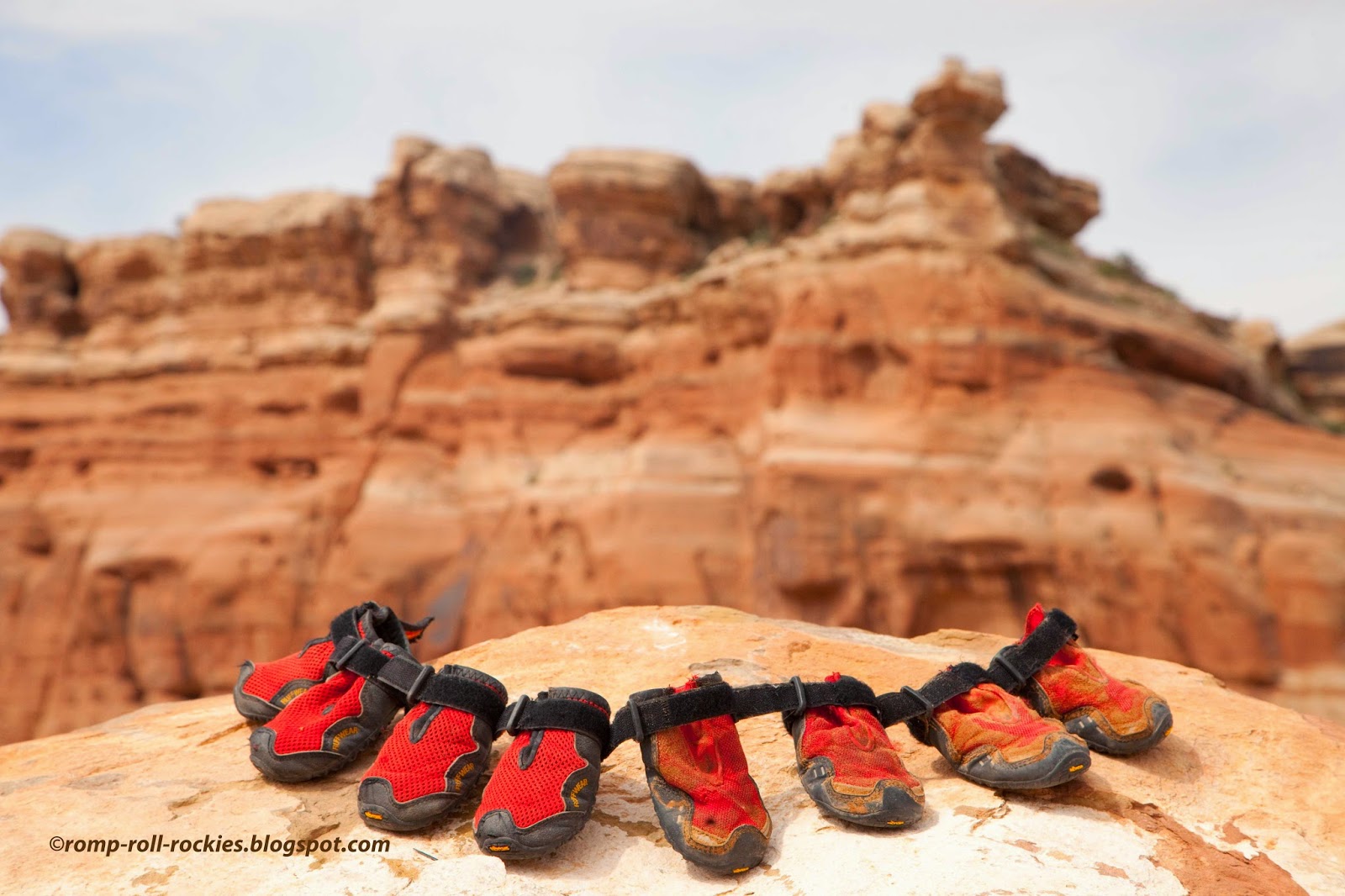 We have a designated "dog boot rock" at this campsite where their boots dry out in the sun during the day. 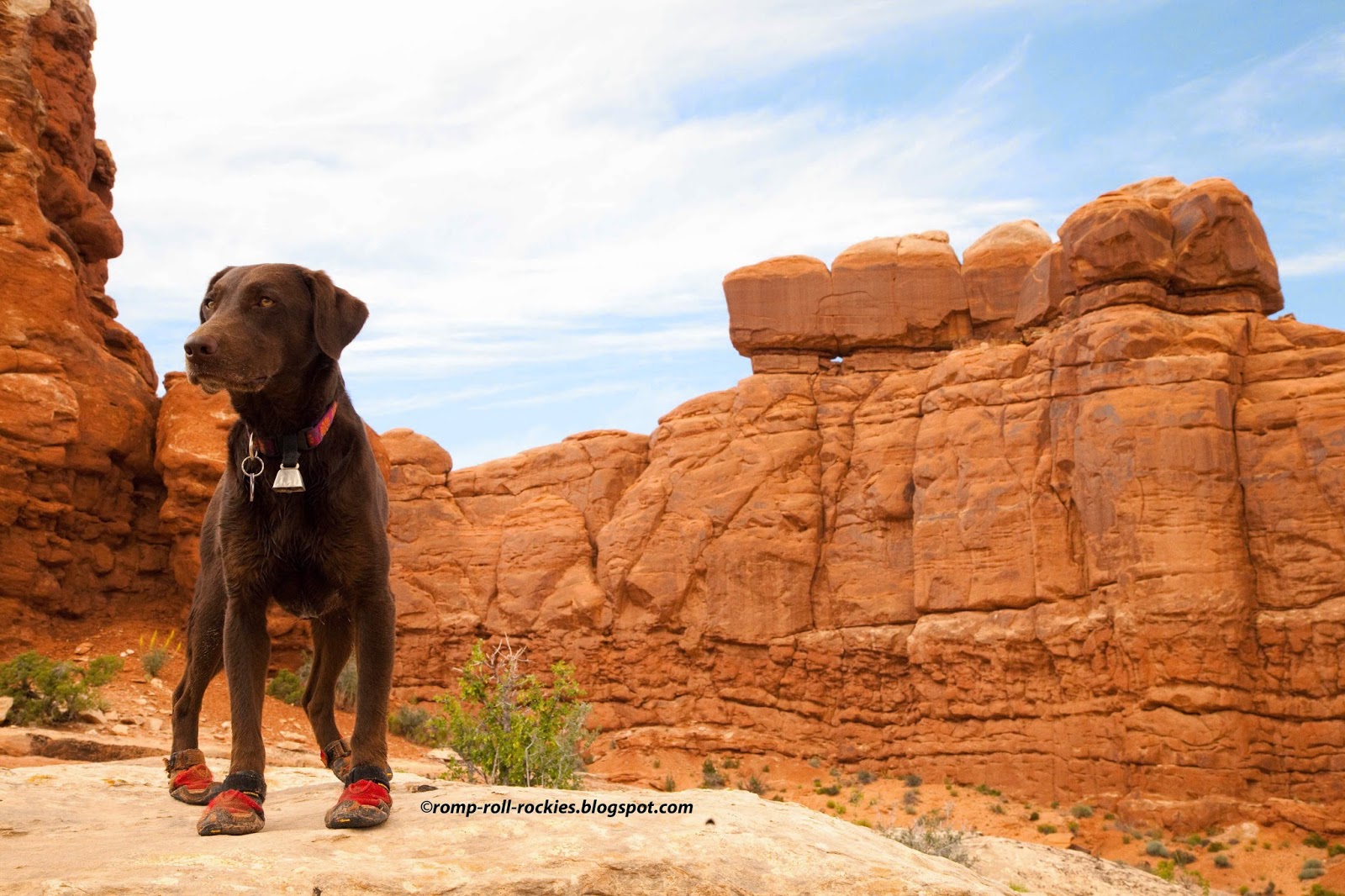 And Shyla adopts poses that seem designed to make it clear that she doesn't like these darn boots. 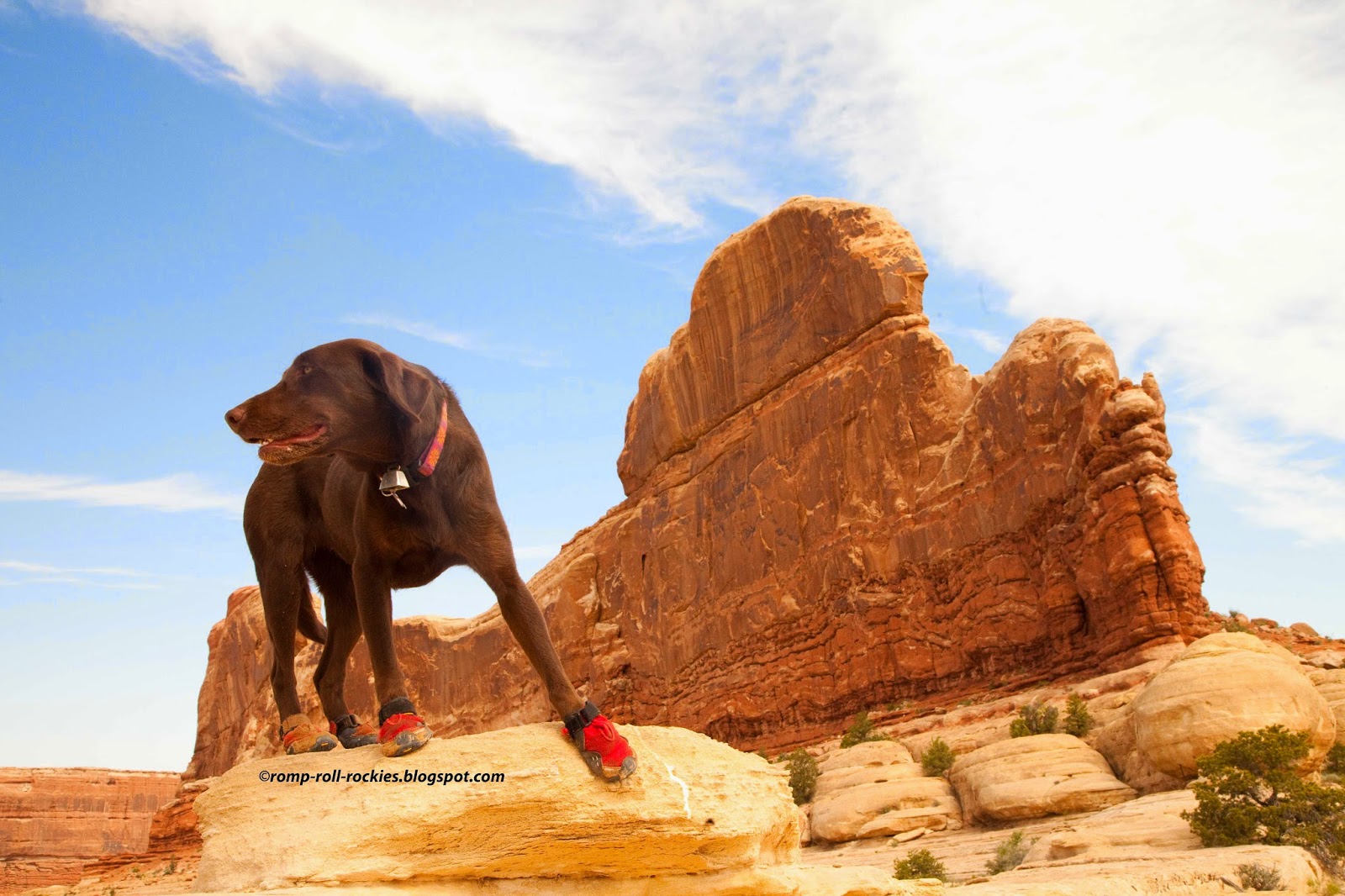 In fact, I fell for it (again), and I loosened up that front left boot. She promptly "lost" the boot. I finally found it later after retracing our mountain biking route.

It's probably the most exotic campsite we know of, surrounded by boulders bigger than cars and huge cliffs. I adore spending time there. 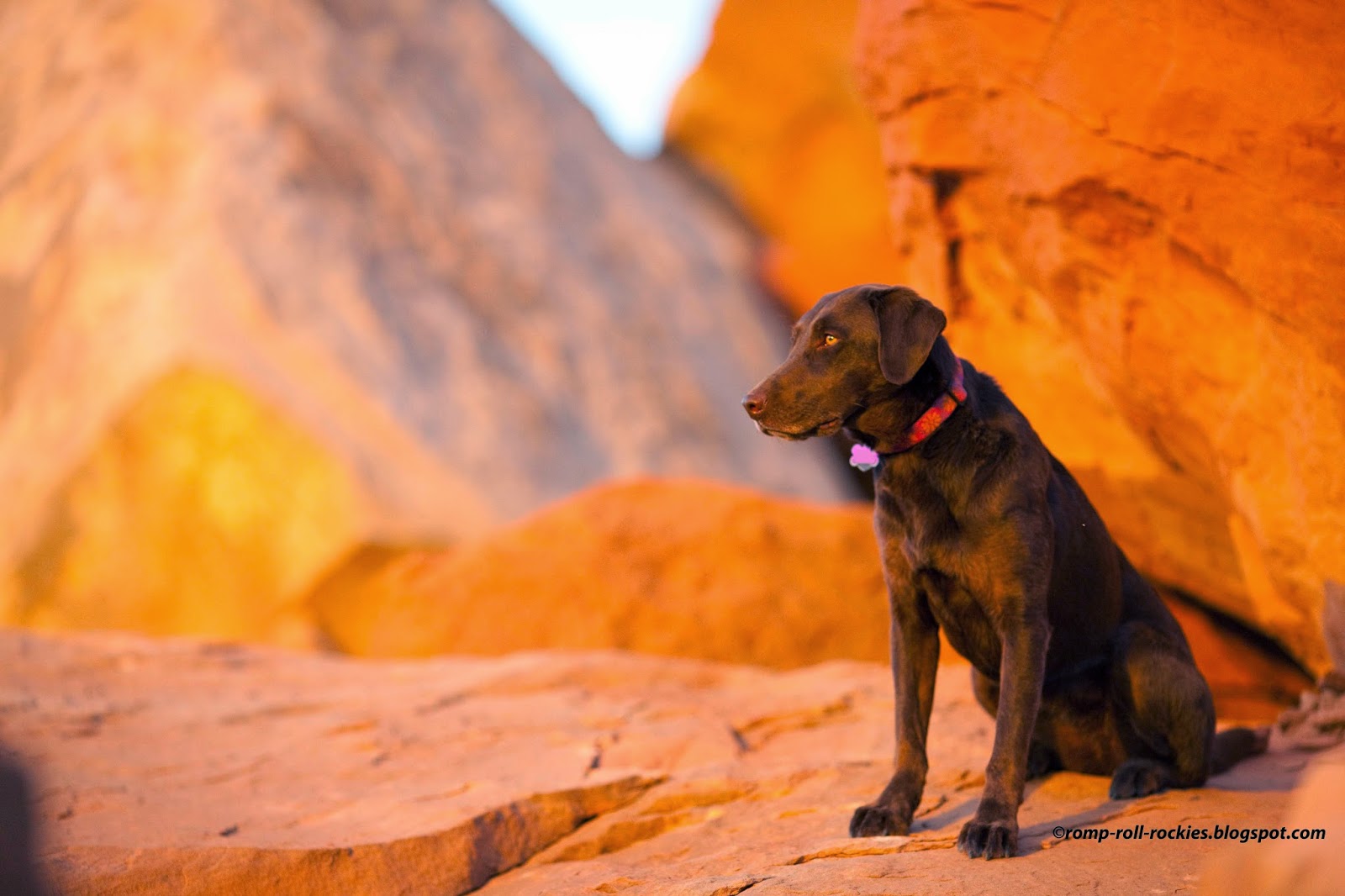 So do the pups. Here is R looking off into the distance. 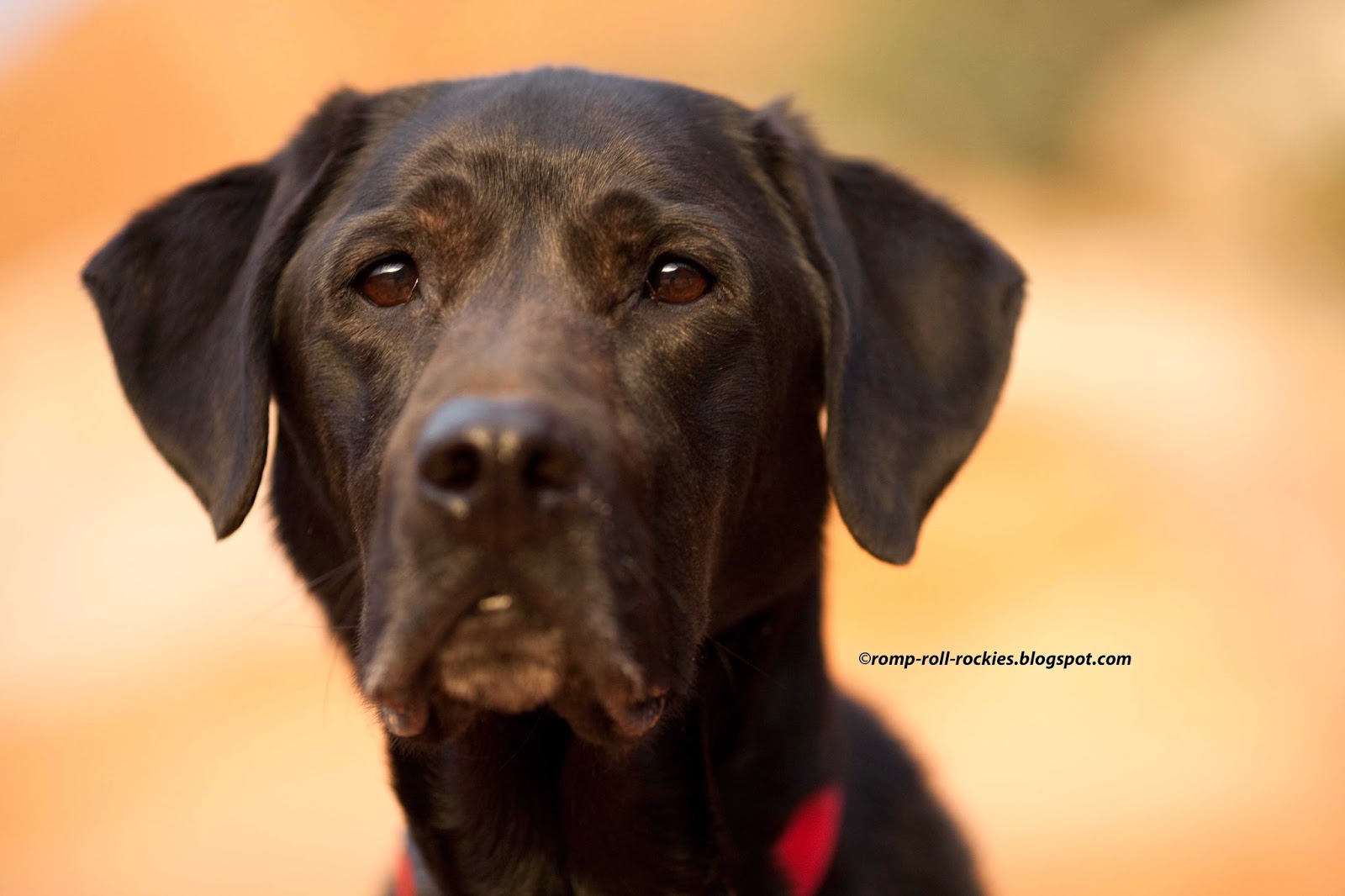 And then looking coy while lying on slickrock. Perhaps you can see in the next photo that his fur is "brindling" a little more each year. Apparently, this is a rare genetic thing that causes black dogs' fur to become sprinkled with other colors - in R's case, it's mostly brown. Apparently, this can become a serious condition in some dogs, with their fur falling out, but it's progressed so slowly in R that I doubt that it's heading in that direction. 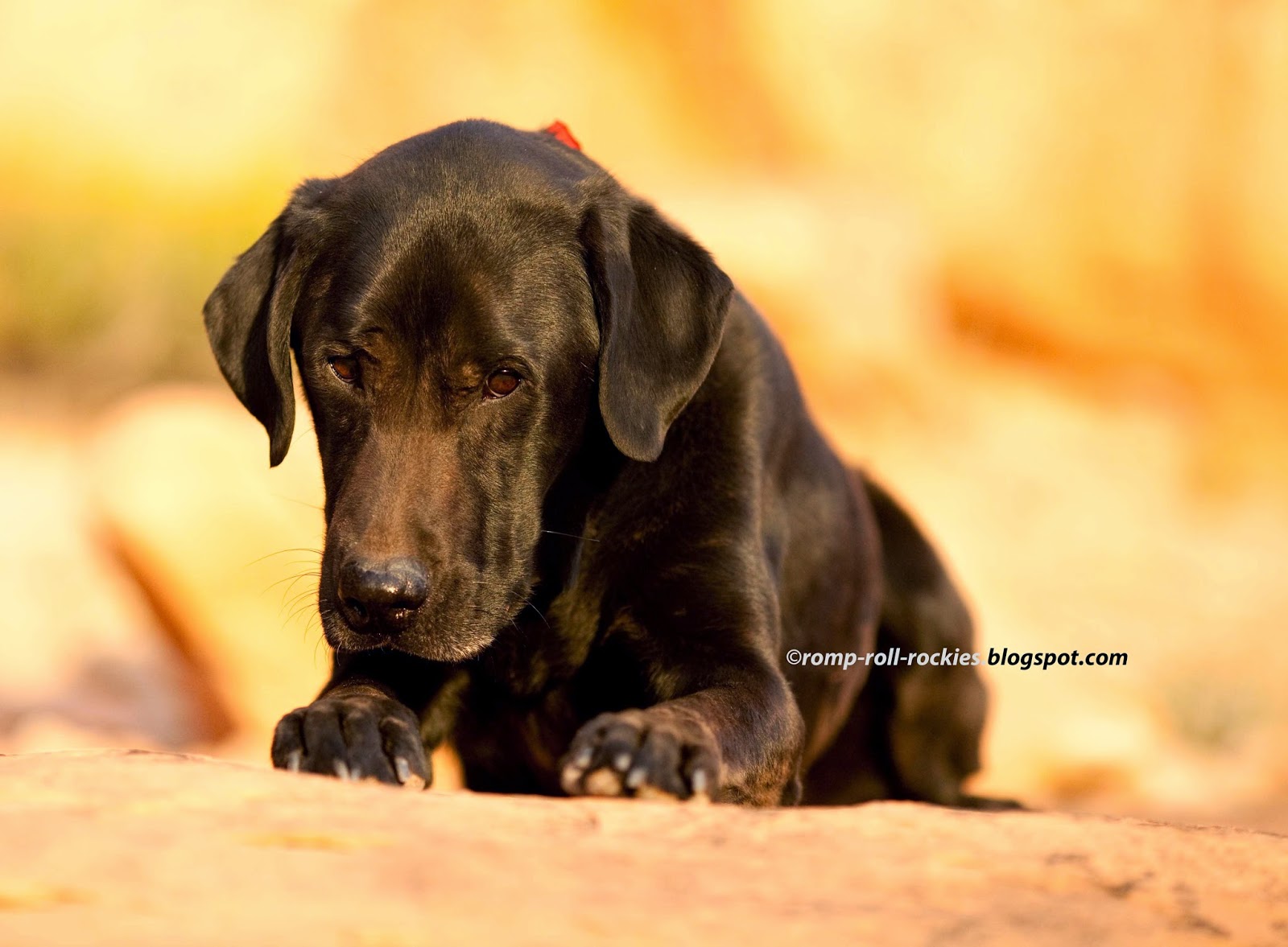 In the Red Rock desert, sunset is one of my favorite times. I adore seeing Shyla light up in the red sun rays with the glowing rock and blue sky behind her. 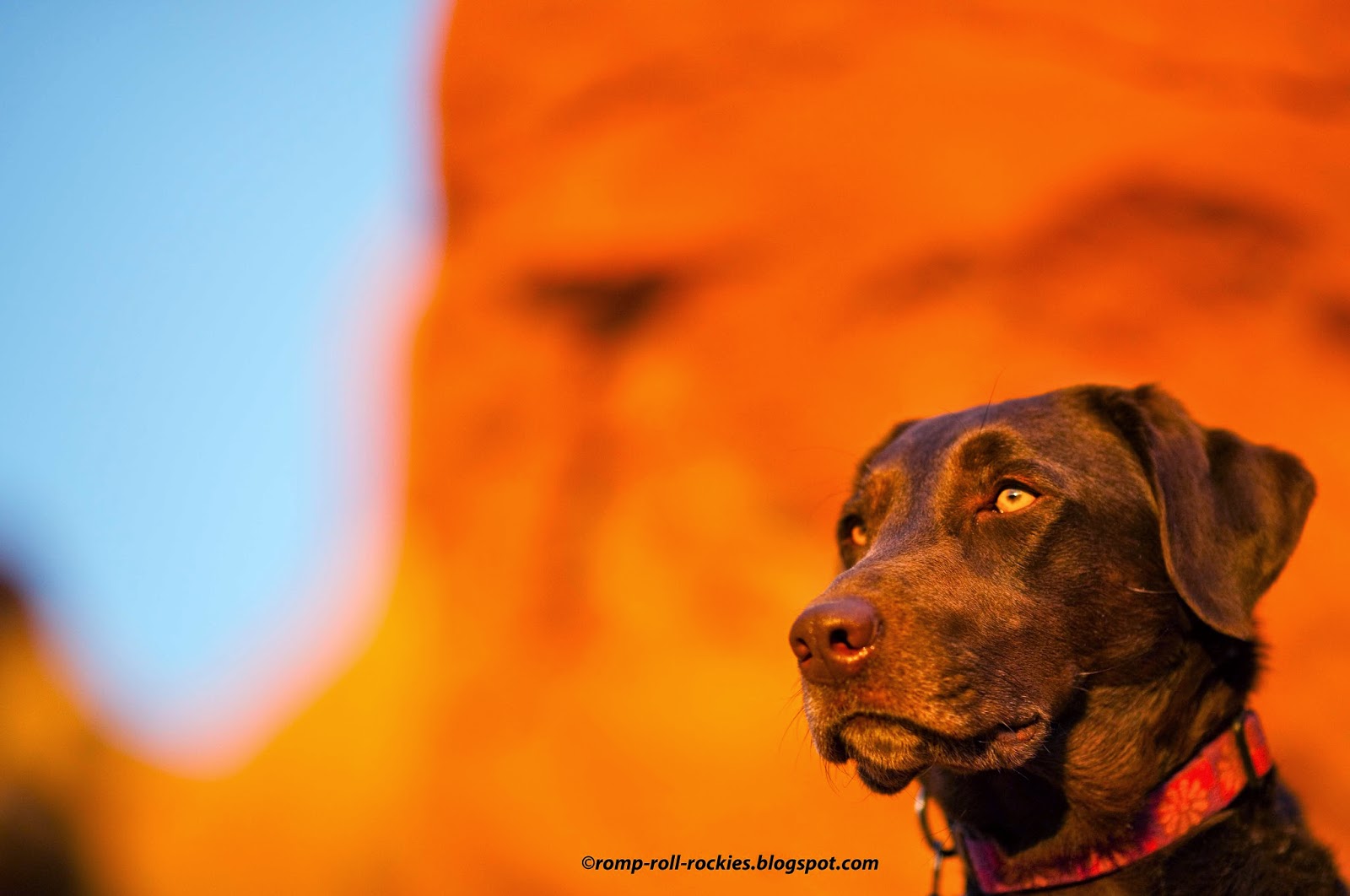 We have fun with our sunset photoshoots among the boulders. 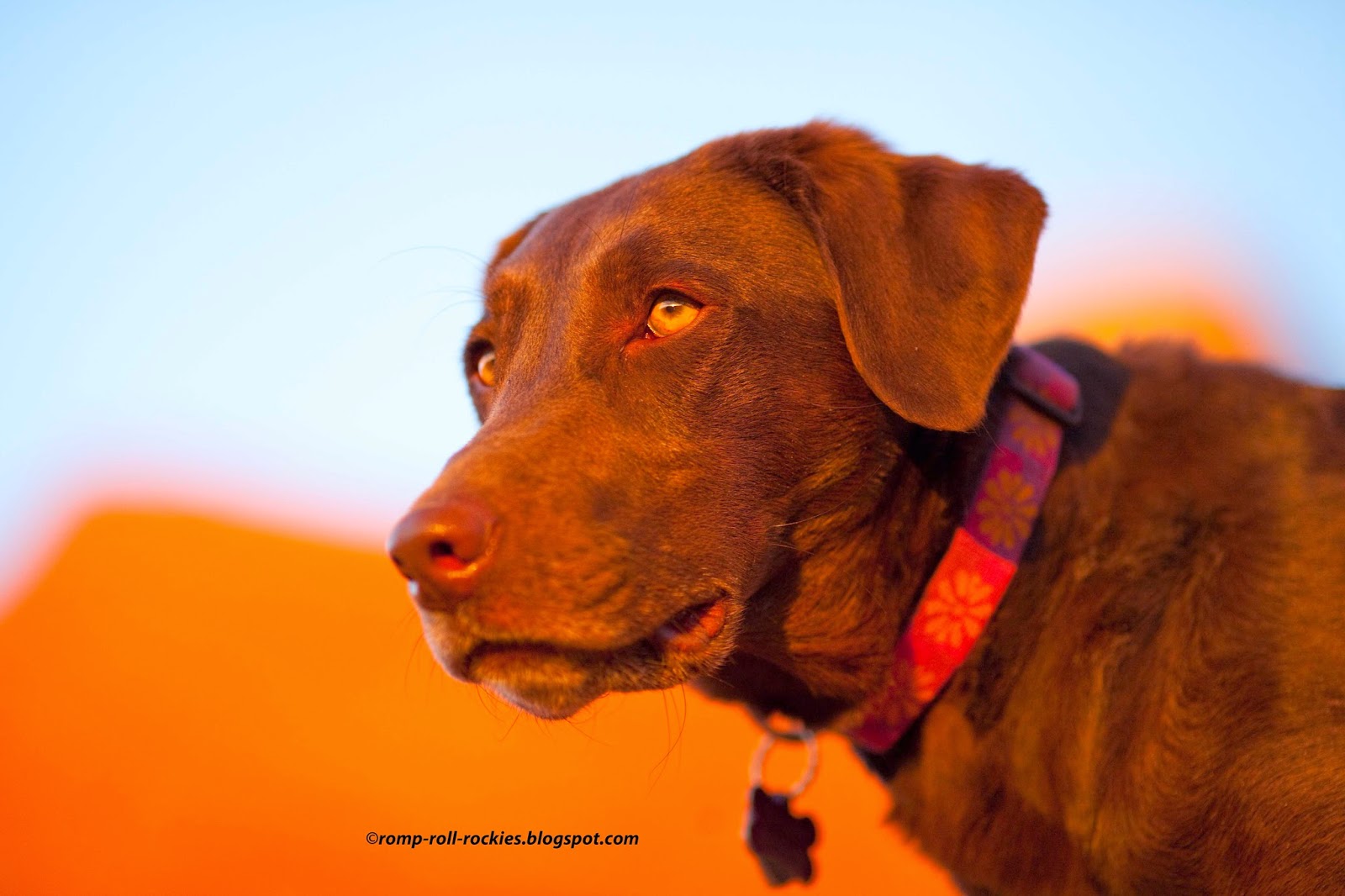 That night, as a rarity, another campsite was nearby and they had a huge campfire. It reflected off the red rocks, looking otherworldly from the camera's view. And, yes, there was another shooting star (faint) in the photo. 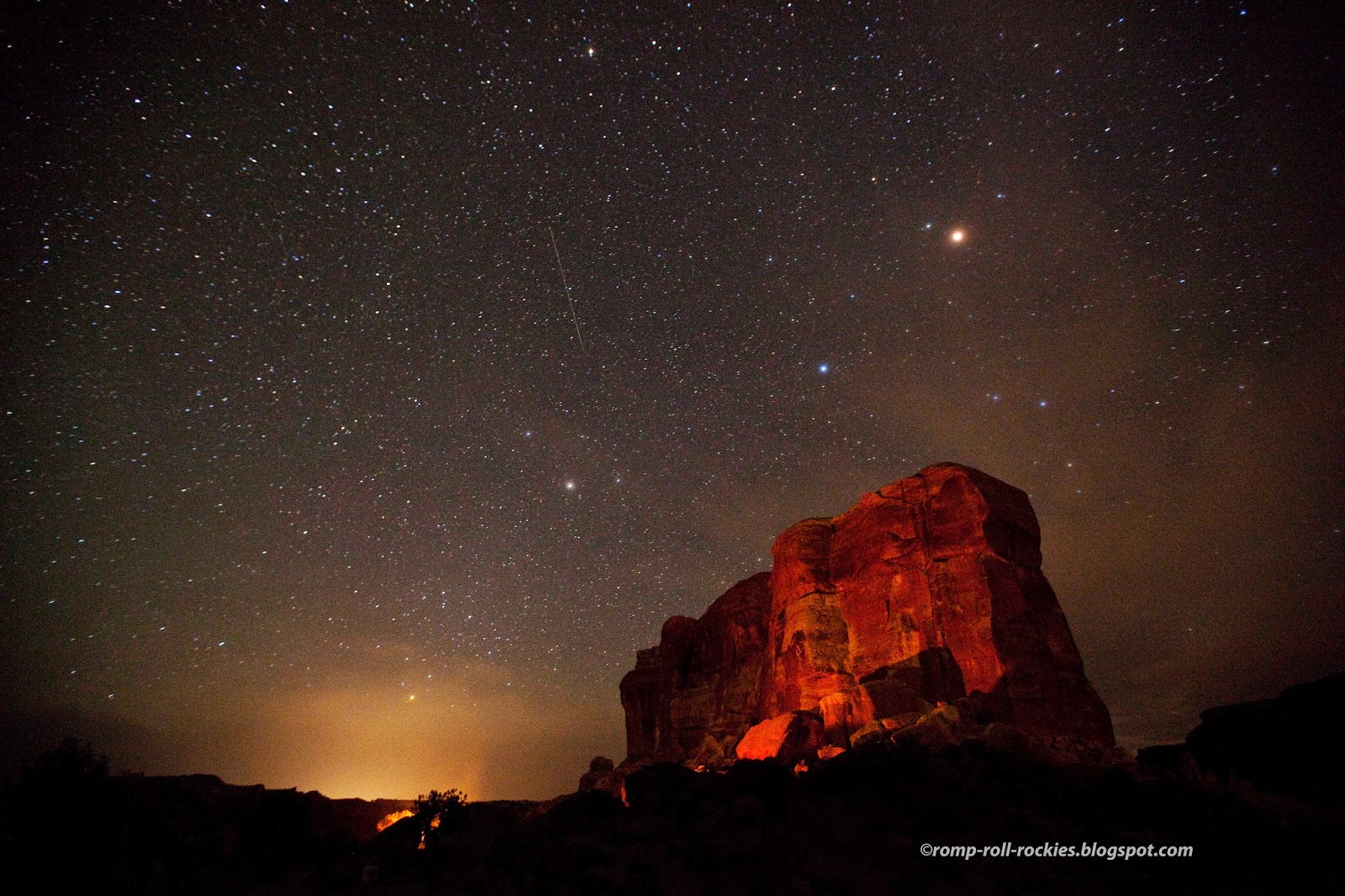 Even when I turned the camera 180° away from their fire, the rocks stilled shined red. I have to admit that I loved the visual effect. You can barely see the "dipper" part of the Big Dipper in the left top of this photo. 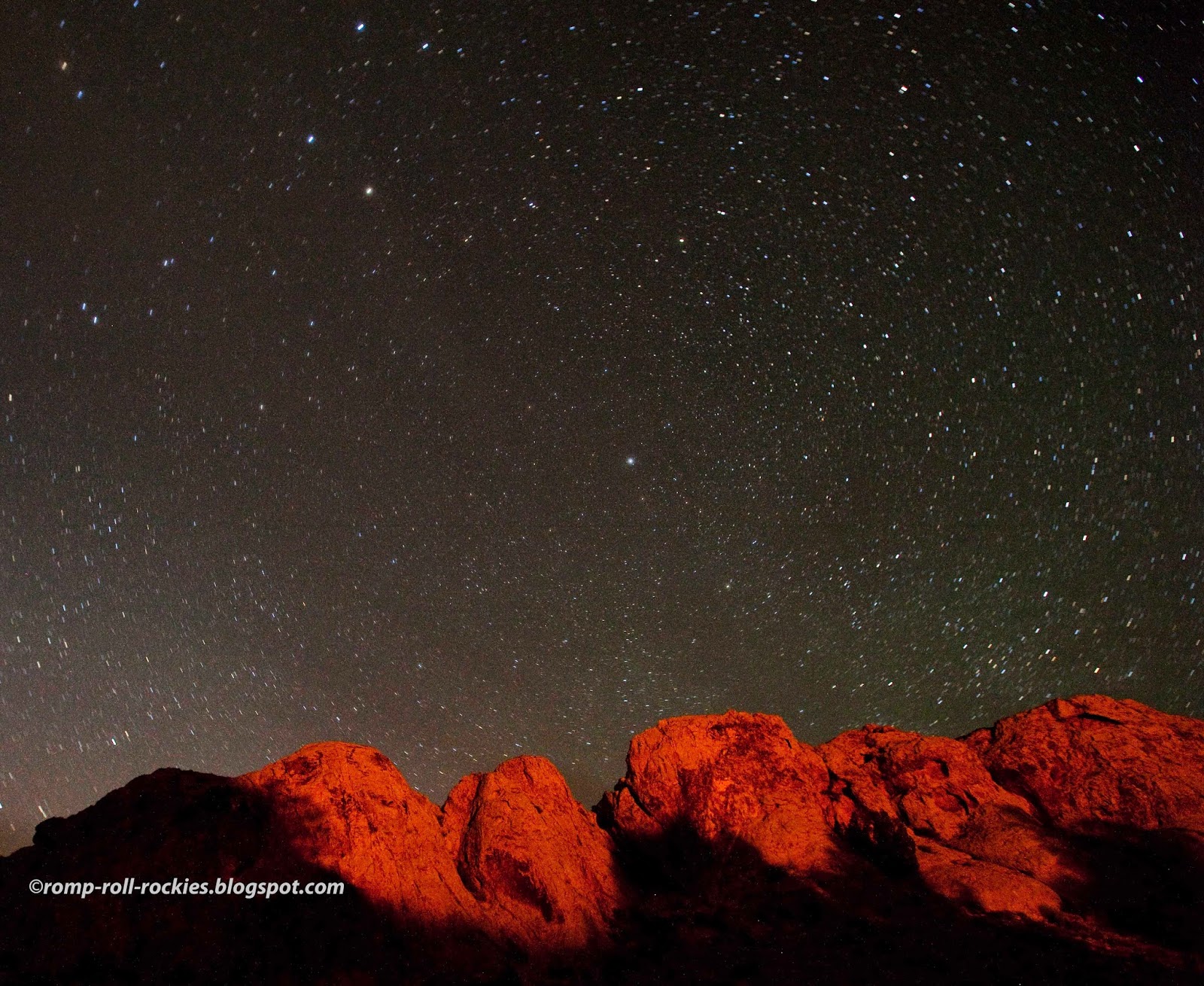 Thank goodness that Springtime is truly here in Colorado or I'd be pining to go back to the Red Rocks!
Posted by KB at 7:08 PM