After my little meltdown yesterday about the abuse of our forest, I had a great day today. The area where I ride my mountain bike with Shyla is almost never visited by anyone but us and our neighbors so most of our rides are in solitude.

Shyla and I headed up high, first thing this morning. It was chilly and windy at our elevation, and we saw fresh snow under a blanket of clouds on the highest peaks of the Continental Divide.

I felt free and relaxed so we lingered in our favorite spot and played fetch for a while. Don't worry - it's really not steep on where I was throwing her toy. 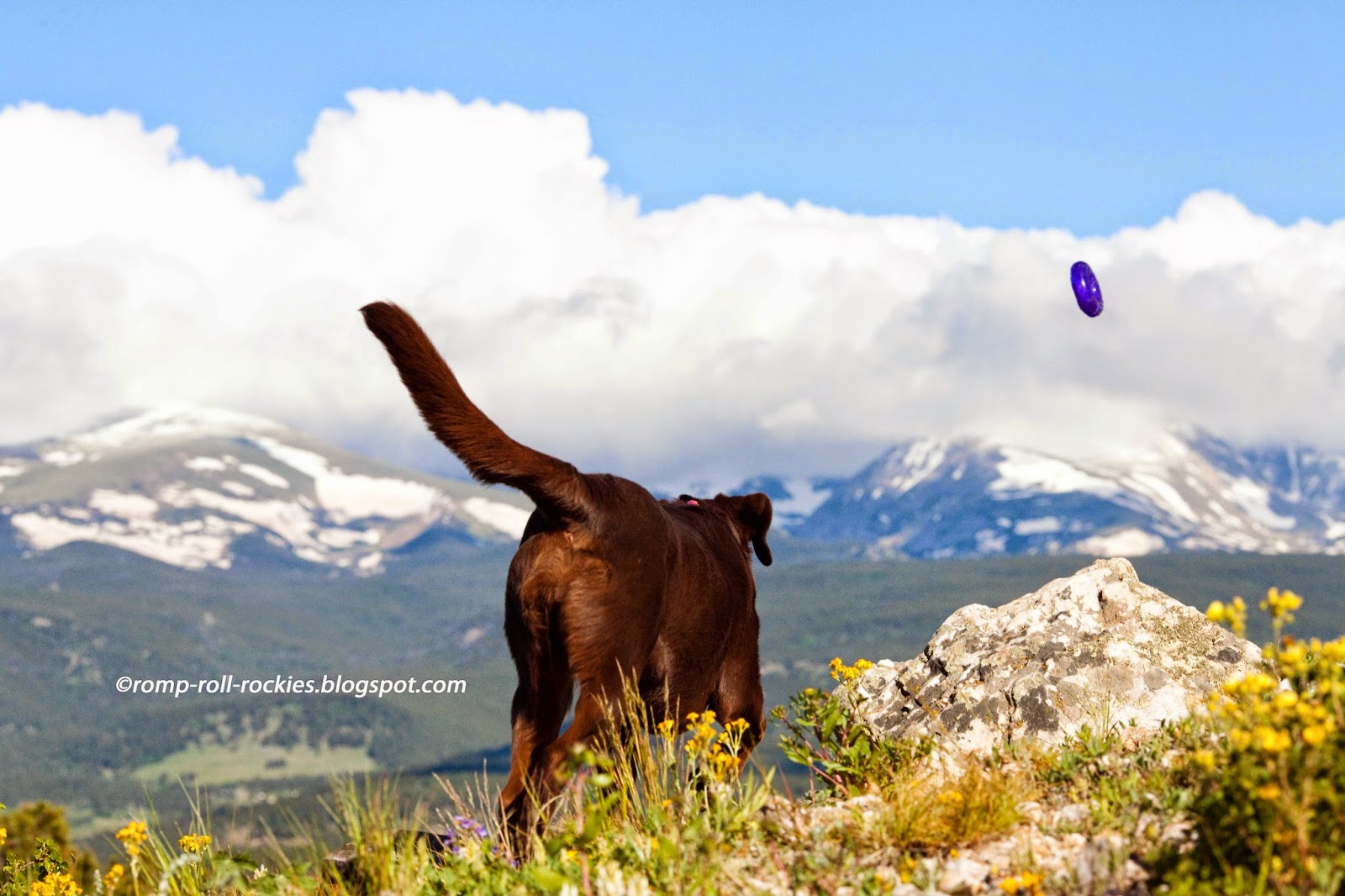 On top of Hug Hill, there's a lone tall flower, called a "Wall Flower", that's been blooming for the past ten days or so. I noticed that the wind was stripping off its petals so I wanted one more photo of Shyla with it. It's been stunningly beautiful this year. 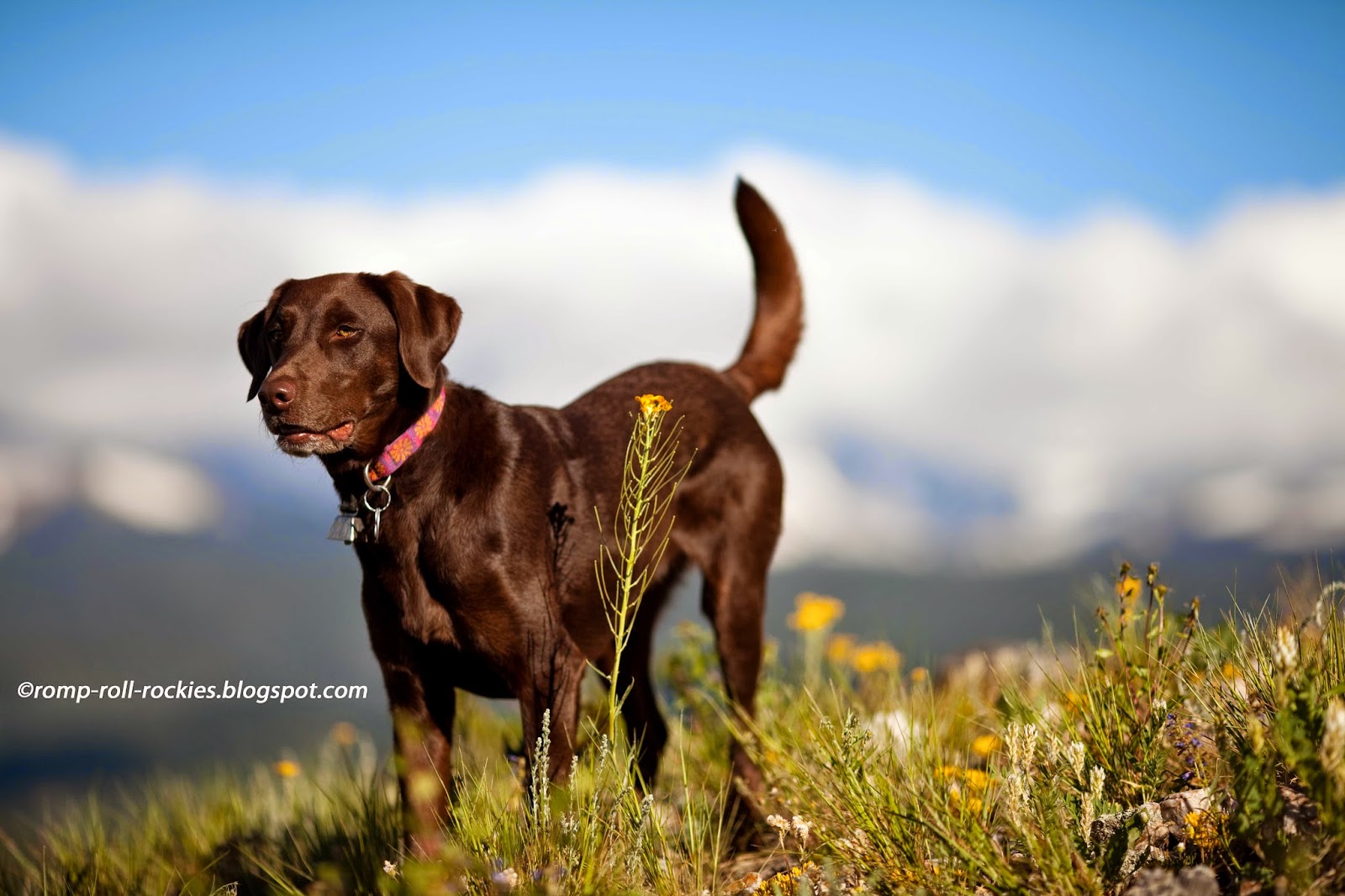 I have to admit that the small signs of the passing of summer make me a tiny bit sad. On days like today, I'd love to have time stand still.

But, there are still Columbines waiting to bloom and lots of summer days ahead of us. This barely open flower/bud was in my garden this morning. I've never had much talent for growing plants but Columbines seem to be an exception. My garden's Columbines are taking off, with dozens of blossoms open right now. 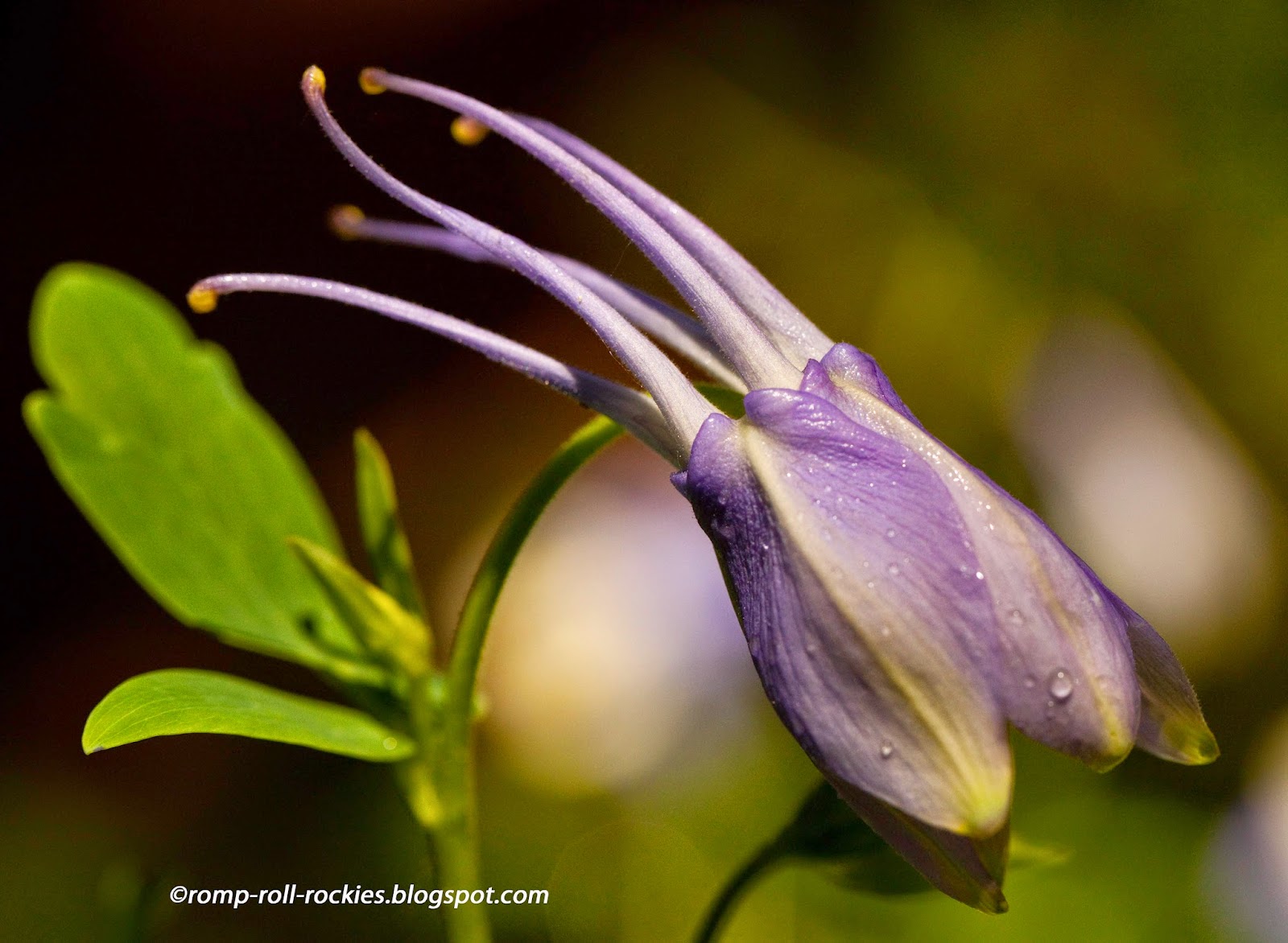 After I left Shyla at home at the end of our ride, I went to check a trail camera that is on a heavily used animal corridor (a place where I never take Shyla). The bear traffic, in general, is waning because bear mating season is winding down.

However, our female yearling cub visited a bear tree. The "bear tree" is really just the remainder of a small pine sapling that the bears have rubbed almost to death over many years. It has a few small branches sticking out from a 4' tall trunk. But, it also has lots of bear fur stuck to its slender trunk.

Our yearling, who the Runner dubbed "Molly", sniffed the tree to find out which bears have been nearby. 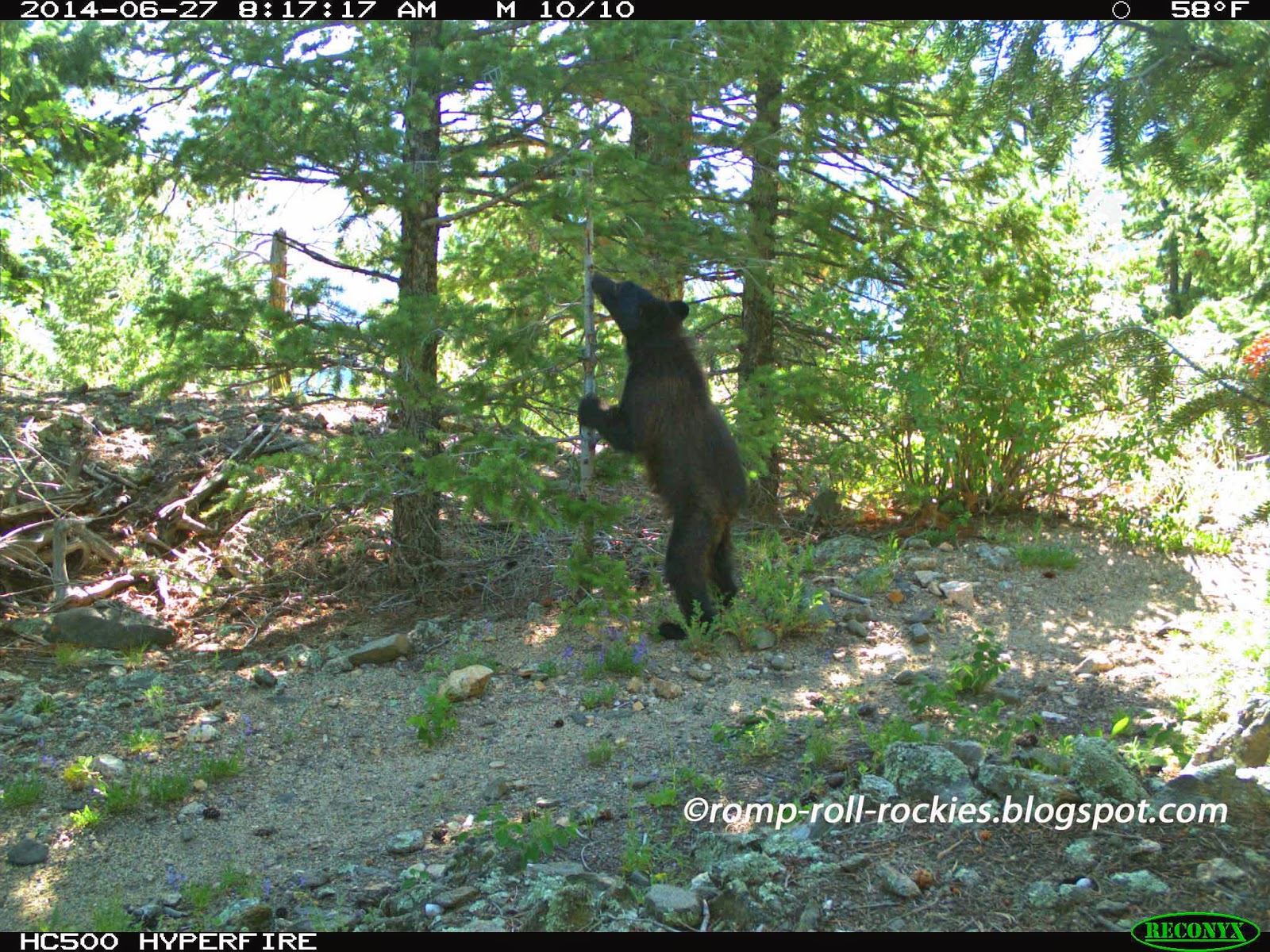 I don't think that her mother, Cinnamom, has been to this tree recently. I'm sure that Molly and her mom are sorting out which parts of Cinnamom's territory will be shared with Molly. Reaching this agreement is apparently not an easy process. When Molly breaks her mom's rules, her mom will probably track her down and chase her into a tree to show her that she's in an "off-limits" area. 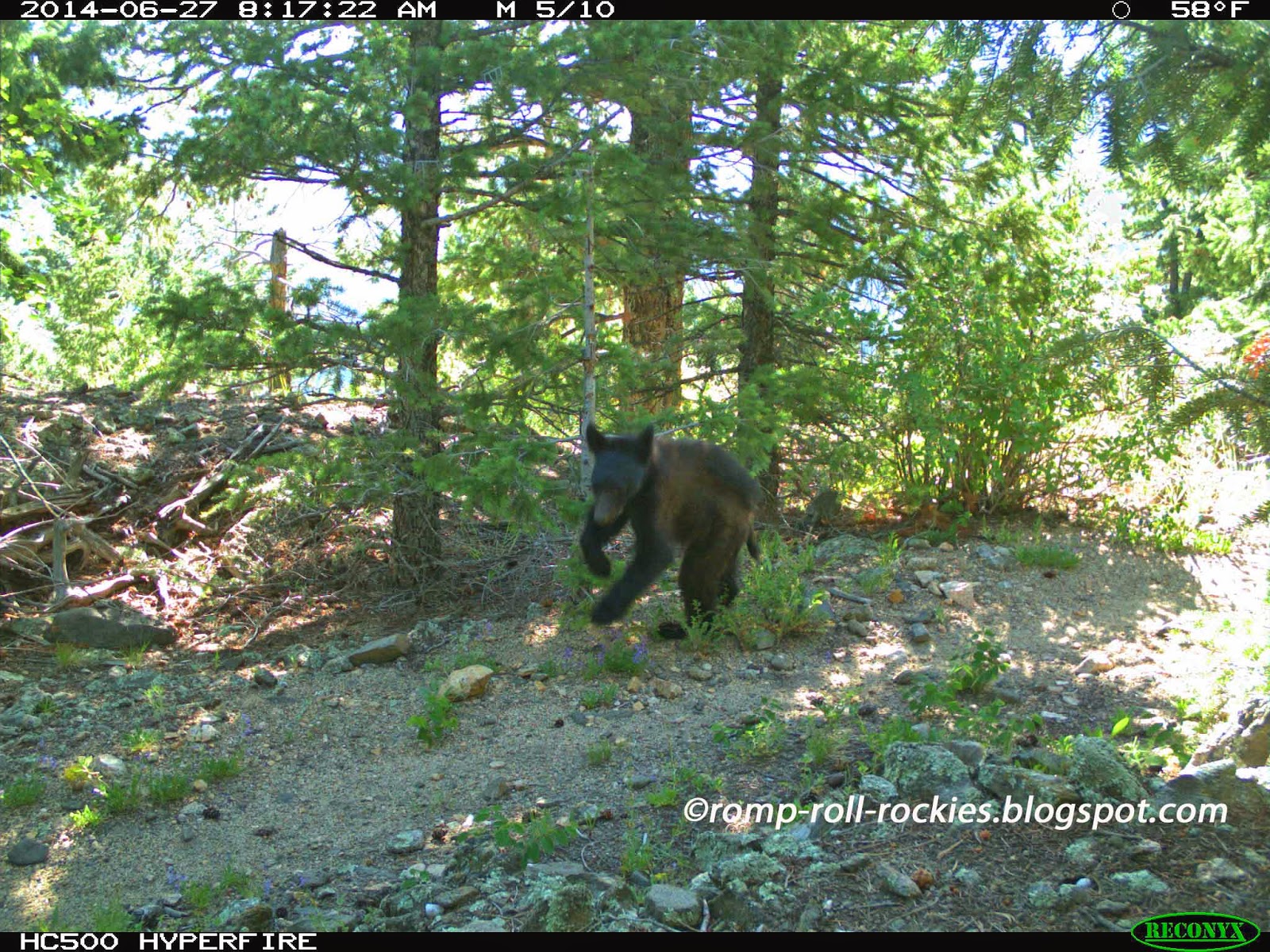 After sniffing the tree, the sweet yearling departed. I think she's looking really good for a yearling. Her confidence is outstanding compared to other yearlings who I've watched via trail camera. Most of them rarely visit bear-marking trees in their first summer as a solo bear. So, after yesterday's rant about the overuse and abuse of the forest on summer weekends, I ended up having a wonderful day in the forest today. I didn't see another person, I had a blast with Shyla, and I even captured photos of a bear! A good day...
Posted by KB at 5:34 PM