We are feeling the dog Prozac kicking in as Hachi is acting much more mellow around non-family members. He also has recently been able to recover when surprised by strangers outdoors. He lets us lead him further away, and then he plays our engage/disengage game. That involves looking at the person, then disengaging to look at us, and finally a treat. The fact that he can play that game after being surprised is a big step forward.

We did have one bad moment this week. Hachi was coming in the door from being outside. R appeared nearby, and Hachi behaved aggressively, snarling at R. That was a truly discouraging moment. That's the part of Hachi that we most want to change. We work on it almost every single day with games where R appears and Hachi gets treats to help Hachi associate R with good things.

The weirdest part is that R is one of the easiest dogs on Earth to get along with. Yet, he is the only one who Hachi seems to have simple aggression toward. It could be a male-male territorial thing. All that we can do is hope that the Prozac will eventually help with that aggression. Apparently, the dose can be increased yet again in the fall.

On the fun side of life, Hachi did his first mountain bike ride up to Hug Hill with me. He was nervous up there, frequently glancing over his shoulder. I got one good image of him, and then we played a bit to help him feel better. 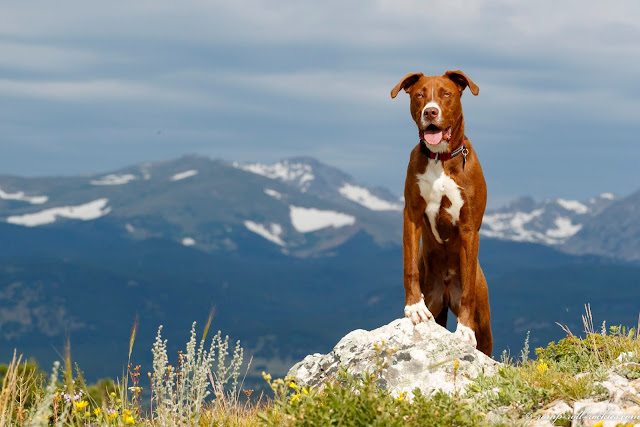 I think that the Hug Hill mountain vista suits him well. Do you agree?

That's the chronicle for this week. Some good, and some not so good - just like life.
Posted by KB at 4:00 AM