Brrrr, it was another wintry and wet day out there. About a month ago, I didn't show you these photos of a bear because I didn't want to admit that the season was truly changing. This spot is close to a bear "day bed" on a deep layer of pine needles that the bears use for sleeping in the fall before they hibernate. I never get a photo of a bear at this site before September - these photos were a sign that summer was ending. 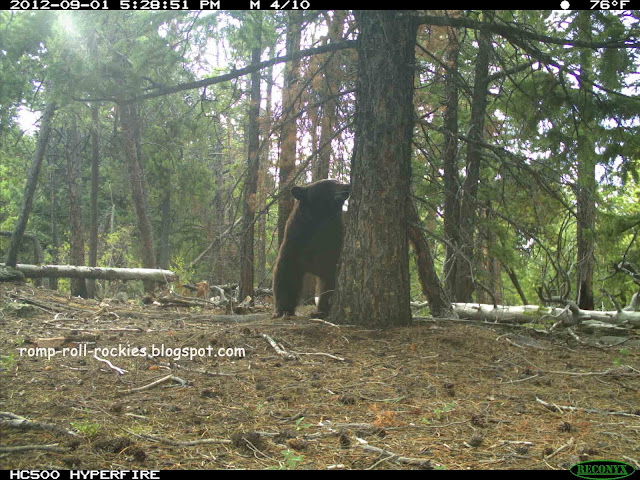 I often can identify the bears (I've given some of them names, as you know) but I didn't see enough of this one to be sure of who he was. I do know that he was a burly and strong bear! 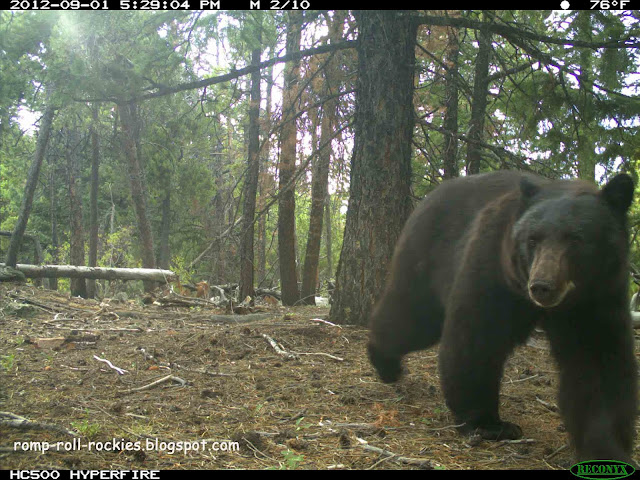 Shyla and I passed near the spot where the bear's photo was taken on our hike this morning. It was cold and ice was dripping off aspen leaves. 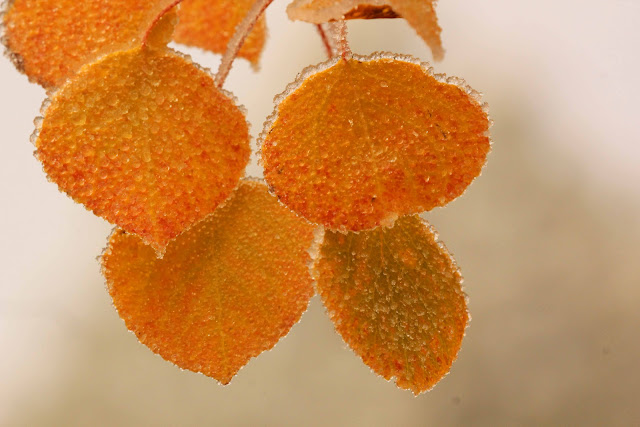 I took a few photos but then I needed to get moving to stay warm. 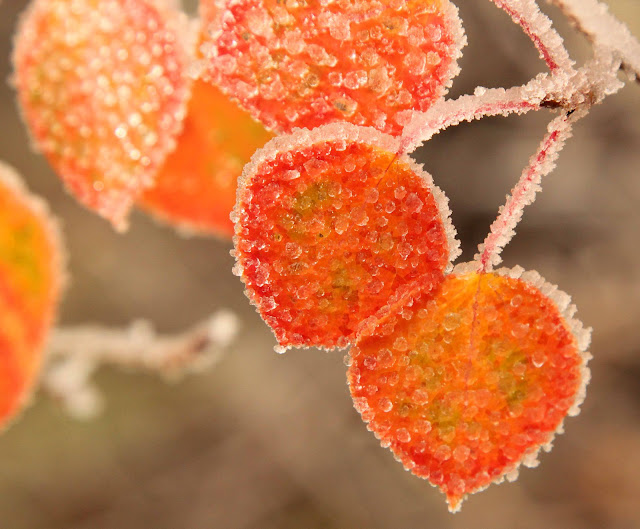 Shyla loves the cold weather. She barreled through the rime ice covered grass from one side of the trail to the other. When I called her, she ran to me at full speed! Her recalls are amazingly good already. 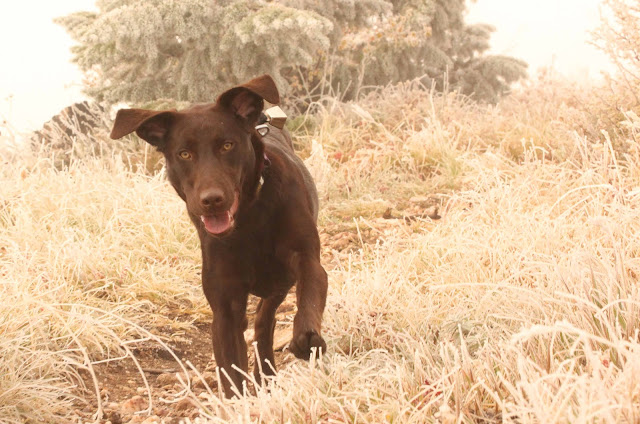 We hit some serious patches of fog, and Shyla would emerge like a ghost from the dim light. Look how high she holds her tail in our forest, and look at the intensity in her eyes. That intensity is new - like a fire has been lit inside her. This girl is finding her confidence and becoming a force to be reckoned with. 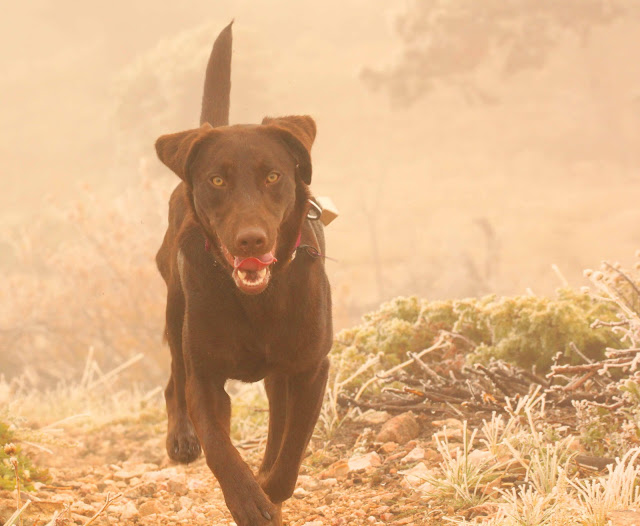 Then, just as quickly, the fog would lift, and I could see colors again. 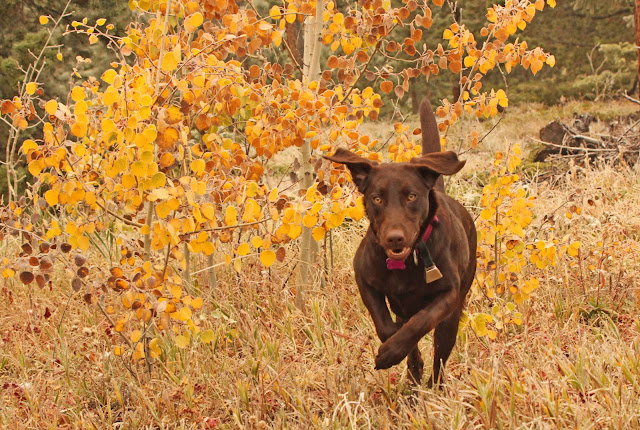 The spiders' webs in the forest were glowing with rime ice - they were so beautiful with the golden aspen background. 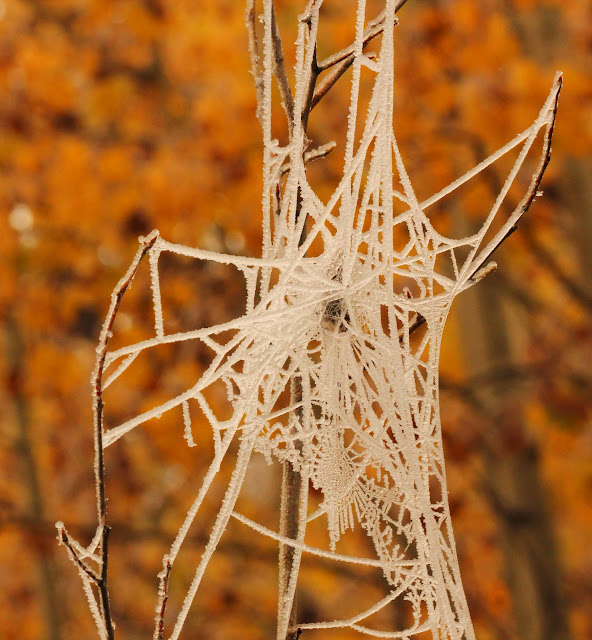 After our hike, I left the galloping Shyla home with the boys, and I headed out into the cold wet world. The pogonip (freezing fog) obscured every view during my ride. 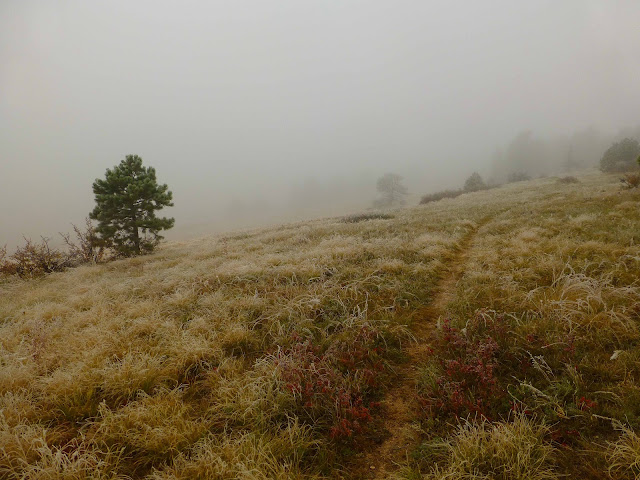 It also made amazing sculptures on the aspen leaves when I hit the most exposed part of the ride. 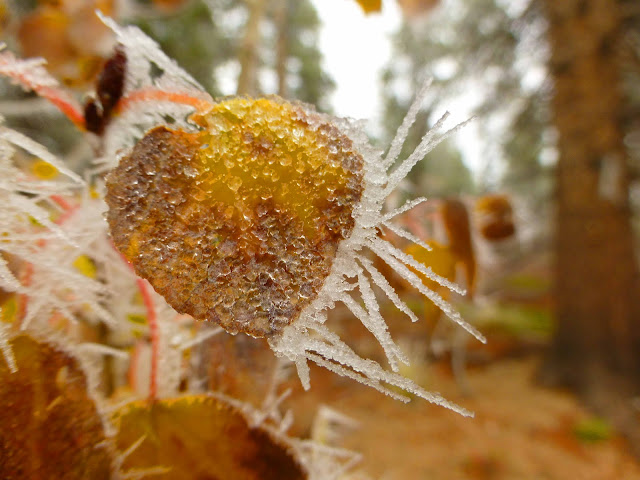 It wasn't my favorite ride ever. When I wasn't climbing straight uphill in the forest, it was nippy and wet. My glasses became so ice-covered that I couldn't see through them. Then, I blew out my rear shock, and I had to pedal very gingerly all the way home to avoid destroying the shock forever. Believe me, blowing out a shock is a feat for a 105 lb girl who doesn't ride aggressively. Fortunately, it was on my "old" bike that I reserve for bad weather days like today.

Now, we are all relaxing in front of a crackling fire. Tis the season...
Posted by KB at 6:08 PM