Hachi had an uneventful week - and that's a good thing! We humans think that he's in a good place these days.
We are slowly but surely learning the rules of life for a dog like Hachi. He loves routine, and it's best to stick with the routine if we can. But, if we want him to adapt to something new, do it as gradually as we can. Last week, we turned his world upside down by accident when the Runner couldn't take Hachi on his normal morning jaunt. So, instead, I took Hachi for a bike ride into the meadow where we played in the flowers. Hachi's head seemed to spin with the stress of novelty. 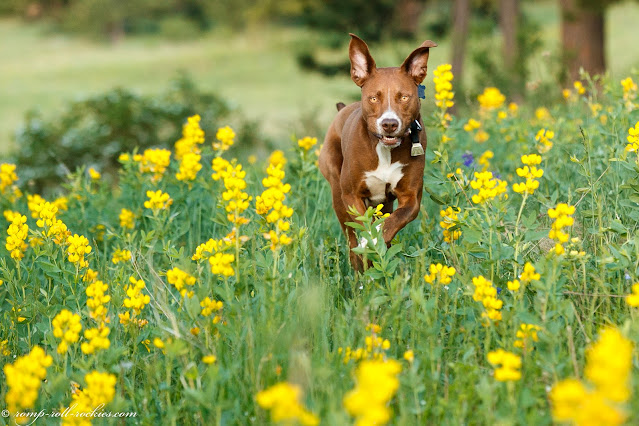 This week, so that I could play with Hachi in the flowers, we all met in the meadow during Hachi's morning run, and then the Runner left him with me for 15 minutes. That worked much better! It had elements of Hachi's normal routine with one unusual part - playing with me in the meadow - and then his normal route resumed immediately after that.
He still was a bit stressed but nowhere near as badly as last week. 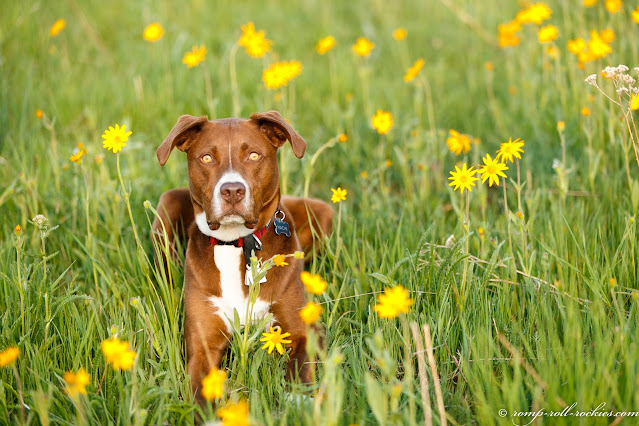 It may sound crazy that we have to think so carefully about Hachi's routine. Indeed, it feels crazy to us. However, we are learning that it's worth being careful. Slow and steady is the best way to help Hachi to change.
All is well in Hachi's world this week. We love him, and that's the most important thing.
Posted by KB at 2:00 AM