Yesterday afternoon, old man winter decided to take hold of our world again. Rather than a sunset hike, we had a snowy hike. 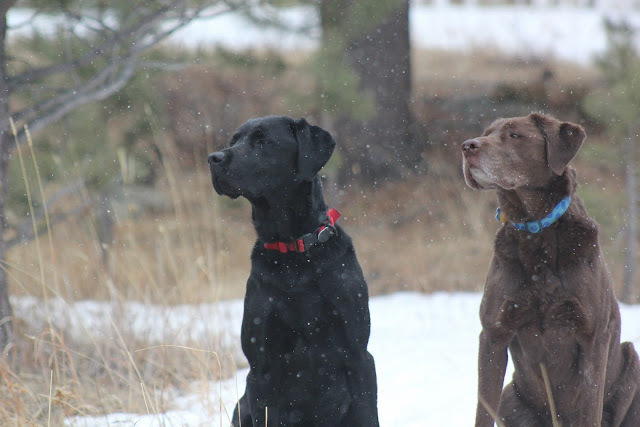 I let the Labraduo run with abandon for our shorter-than-usual jaunt. 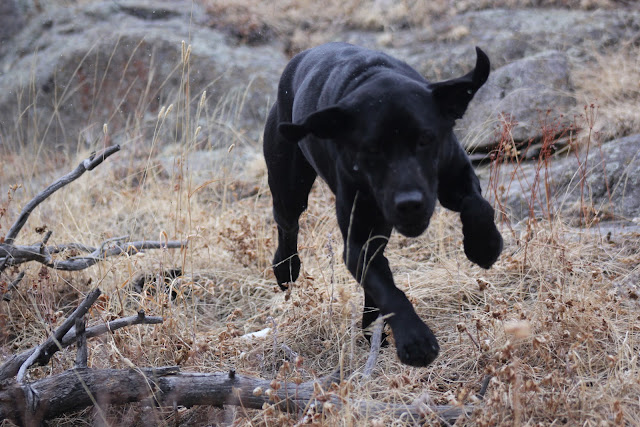 Overnight, a thin coating of snow and hoar frost transformed the world. 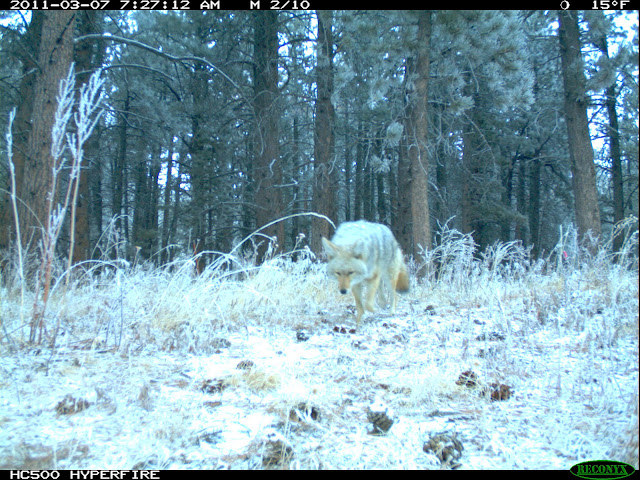 I recently pointed a wildlife camera at a freshly scraped spot that has bobcat scat on it. I've learned over the past year that a bobcat scent post is likely to be an important site for many species. This morning, a coyote visited it. She trotted briskly straight toward my camera and almost missed the scent post. She screeched to a halt, turning her head toward the territorial marking by the bobcat. Her movements were so swift that she was blurred in the photo. 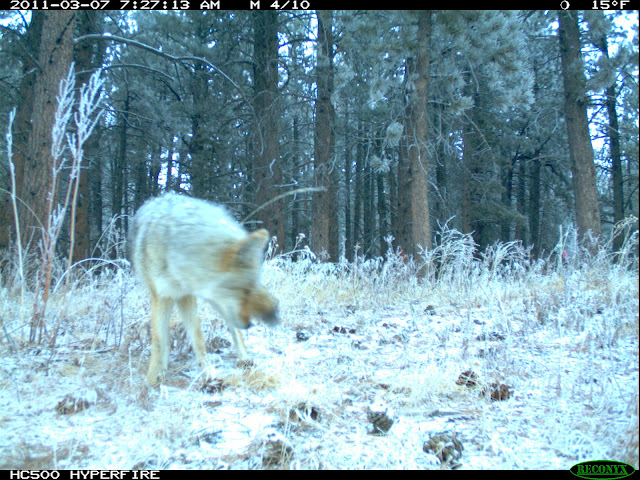 She sniffed it with her elegantly long nose. 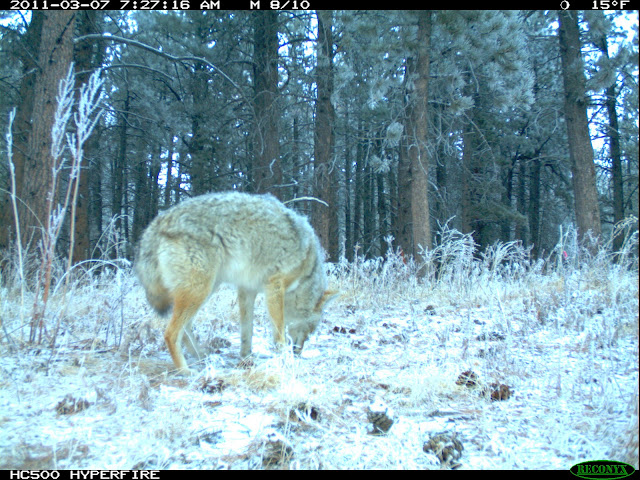 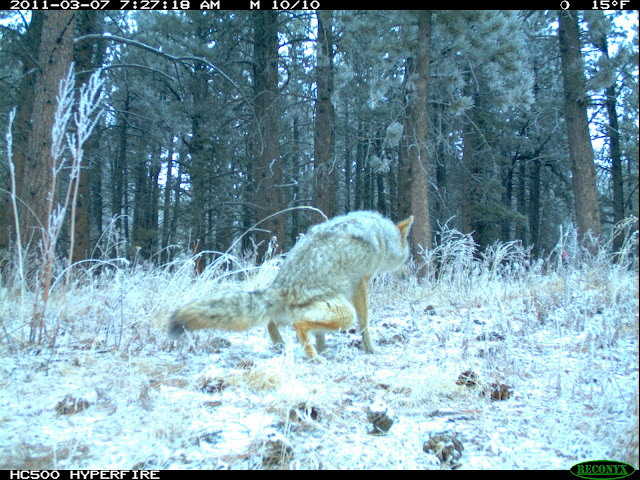 As if she knew that she'd just been photographed in a compromising position, the coyote assumed a statuesque and noble pose, gazing into the distance. I know that many people don't like coyotes but I think that she's beautiful. 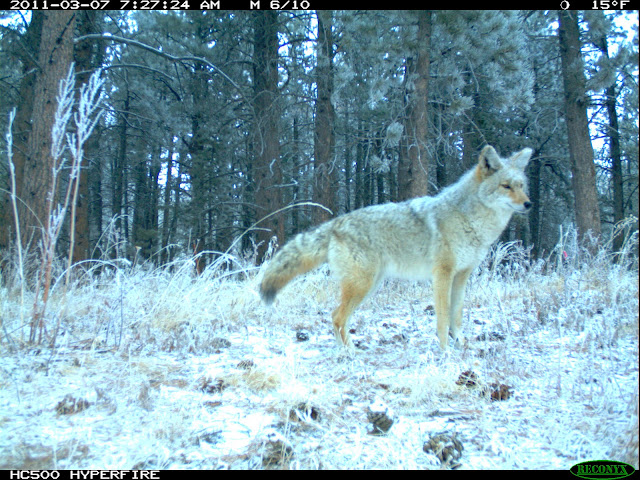 At around the same time, K and I were in a different part of the fog-enshrouded and frosty world on a snowbike ride. 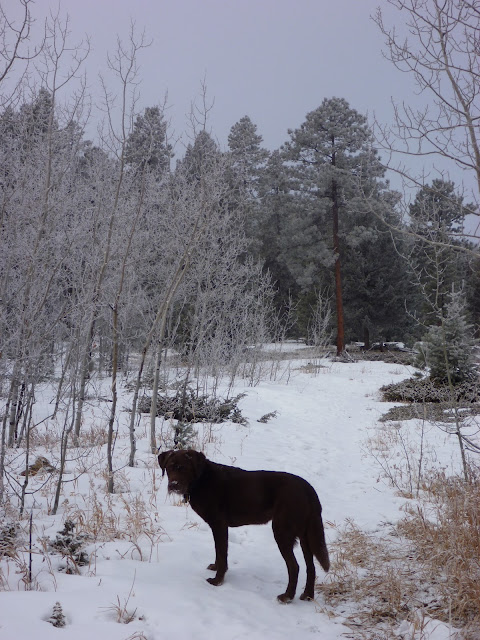 Look at the sparkle in K's eyes! She didn't mind the weather in the least. 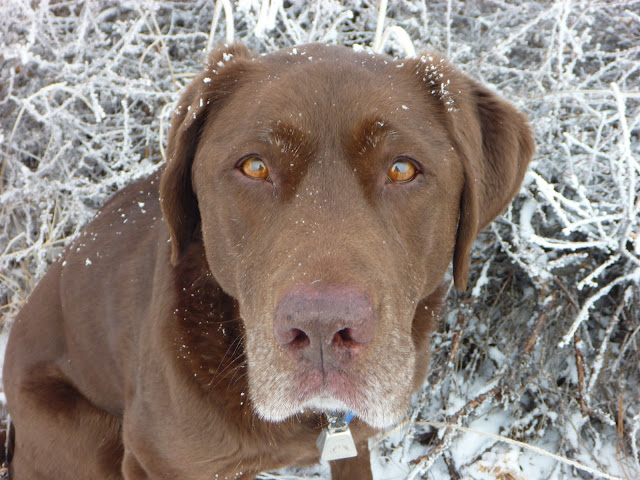 The foggy world seemed so black and white, without vivid colors that my eyes started seeking them. I noticed brilliant orange lichen with a hoar frost coated grass stalk in front of it. That sight took the drabness out of the morning! 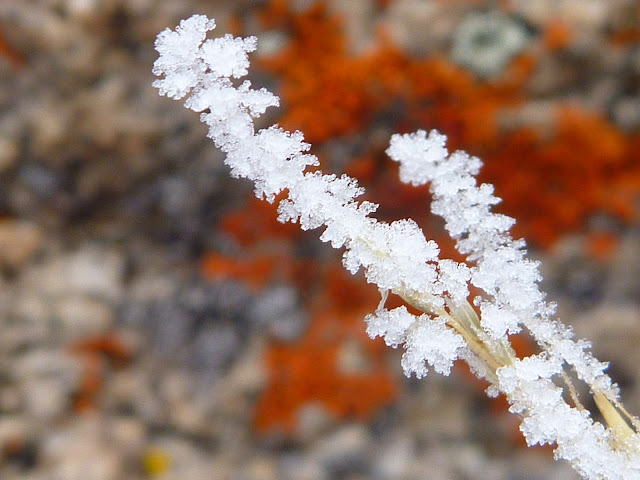 Just before we arrived home, K heard something in the distance and climbed on a boulder to survey, just like her coyote cousins like to do. 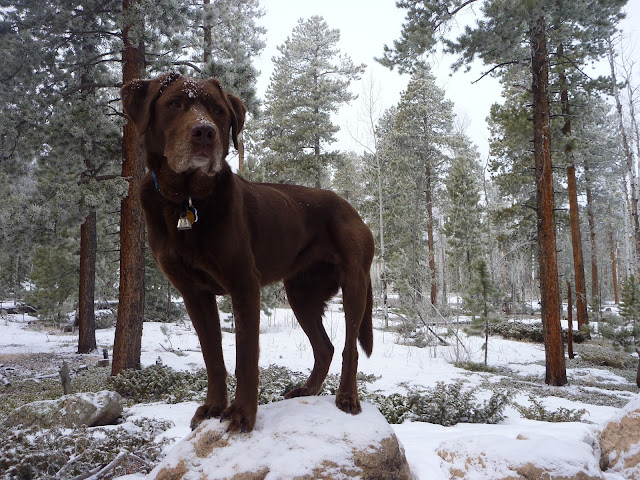 When I dropped K off at home, I donned an extra layer of clothing and packed yet another layer into my backpack. It felt like the type of damp and cold (15°F) day that can lead to hypothermia very fast.

The world near my house was so foggy that I could see less than 50 yards. So, I wore a florescent jacket as my outer layer. I slogged up the road toward the Continental Divide, and within ten minutes, the world was crystal clear. The hoar frost on the aspen skeletons sparkled in the sunlight with an azure sky as the background. 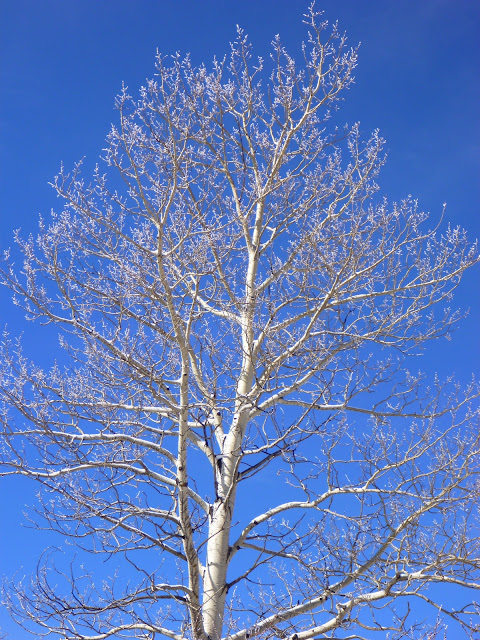 As I crested a hill, I saw the Divide. It still had a few clouds floating over it but nothing like a few moments earlier. 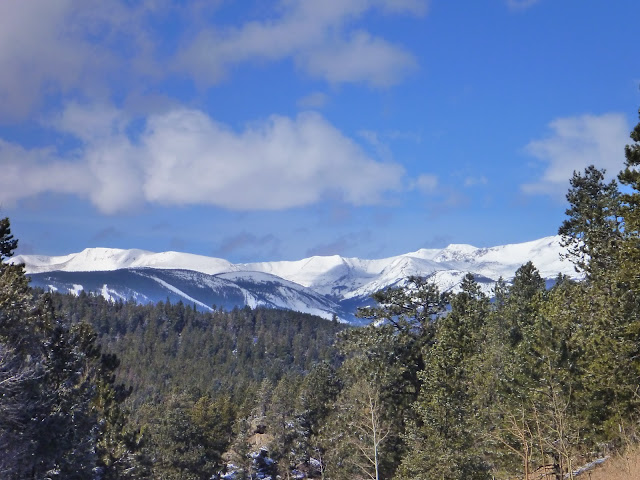 I hit my favorite snowbiking trails and hammered along in a few inches of fresh snow - a trail to heaven! 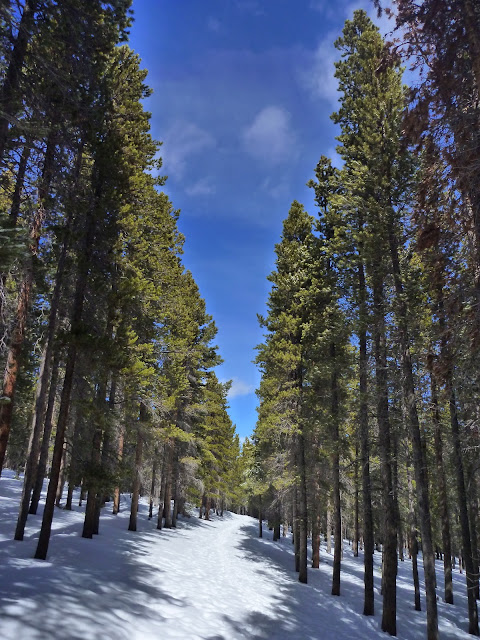 I noticed the pine trees glittering and examined them more closely. I saw icicles sparkling in the sunlight! Each icicle had a mirage of a tiny pine tree at its core. 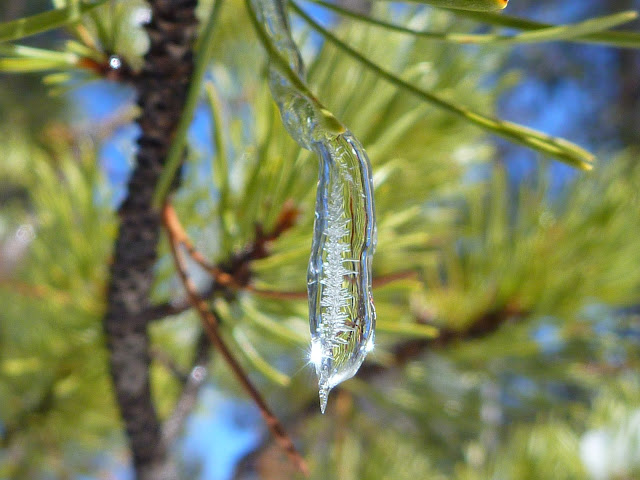 By this point, the intense sunshine was boiling me inside my many layers of clothing. I stopped to take off a layer, my neck gaiter, and hat before beginning the ride toward home.

To my utter disbelief, within minutes of starting to pedal toward home, I felt daggers of frigid air and ice pellets attacking me. The storm front was invading our world again. The clouds oozed inexorably from left to right in the photo below. 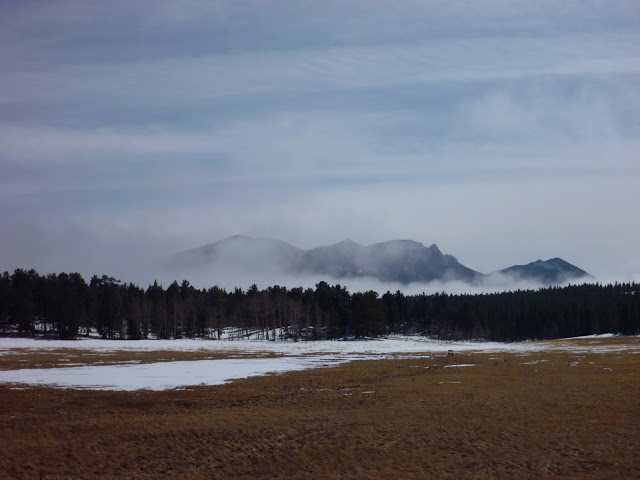 I arrived home in the midst of pogonip (my favorite word for icy fog), feeling like I'd visited an alien blue-skied planet during my ride. I wondered if I'd hallucinated the clear blue skies! But, the photos proved it - they were real.

While I was gone, my wildlife camera on the driveway took the most intriguing photo. Any guesses? I don't know the answer but it could be scary. 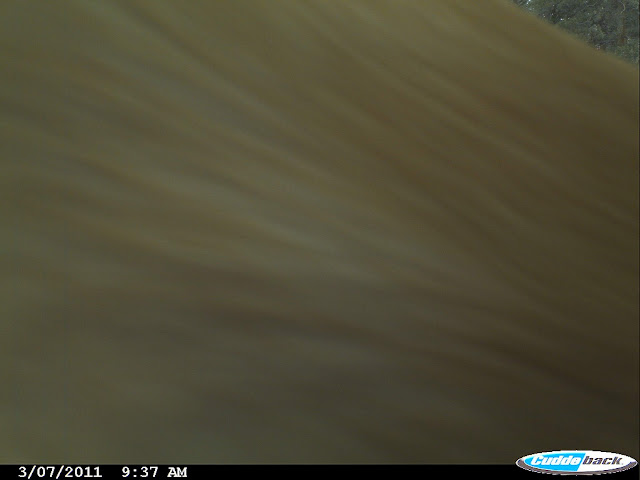 Several of you asked why the wild animals use our driveway so much. There's no pot of gold at the top of it. I suspect they like the cleared surface for walking much more than the surrounding snowy and icy landscape. The bobcat seems to use the small paths around our property in the non-snowy months and the driveway in the winter. I'm glad that we can make his life a little easier!
Posted by KB at 4:40 PM