Singing with joy and coyote musings

R has learned about the good life. While his humans are up before the light, having breakfast and preparing for the day, R snoozes. Occasionally, he'll notice that "romping time" might be approaching, and, while lying in bed, he sings with joy. It's the R "happy song" - his joy and anticipation of a new day bursts out in high pitched notes. Then, he goes back to sleep until exactly the best moment to prompt the Runner to hurry out the door. 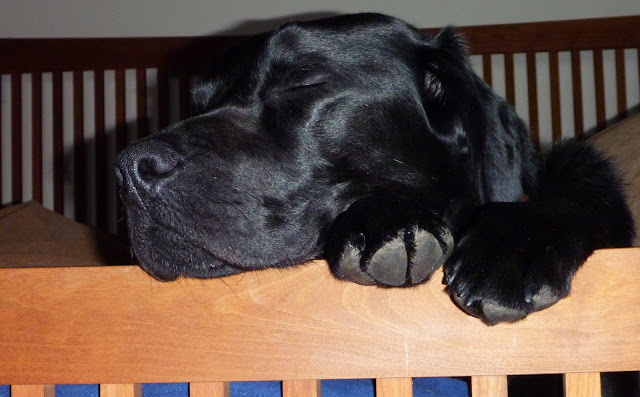 K stays in bed too but without the singing. Her golden eyes follow me closely, awaiting the moment when I invite her to come on a bike ride.

This morning, near the start of our snowbike ride, K played on the rocks, showing off for the camera. Who says that dogs don't smile? 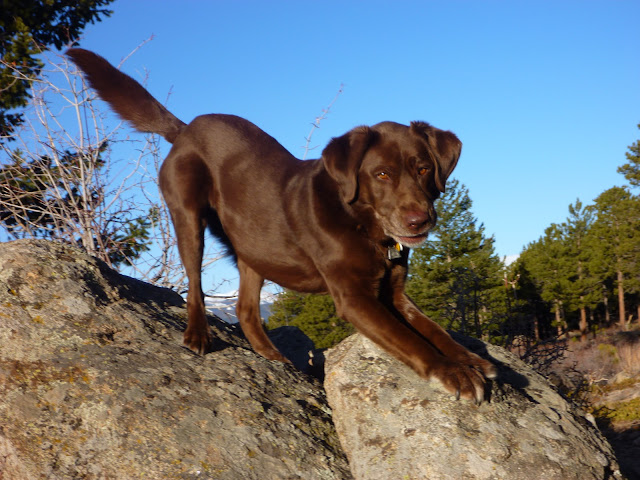 Today, it felt like spring had dawned overnight. After freezing and windy weather yesterday, we soaked up the sun, smiled as chickadees sang their spring songs, stopped to spot the drumming woodpeckers, and grinned widely upon noticing aspen buds seemed to have swelled up overnight. The leaves won't unfold until until late May but I enjoy the buds for months! 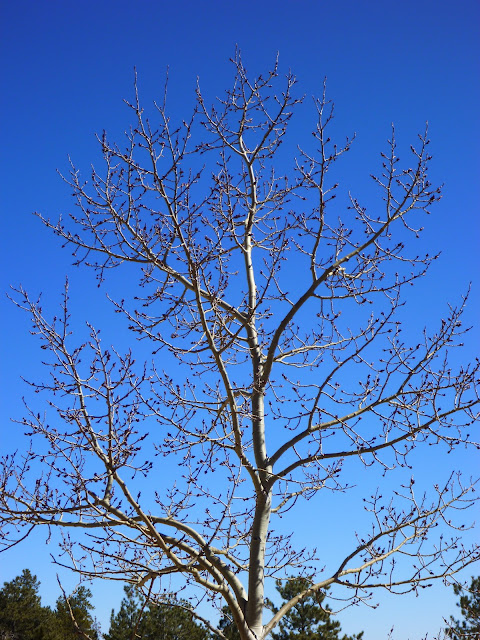 My back is aching badly so riding the trails wasn't as joyful as usual. I had "dry needle trigger point injections" yesterday to try to break up my back muscle spasms. Alas, this time, the procedure rendered my back muscles as angry as a distressed swarm of bees. Hopefully, it will pass soon.

I hope that tonight's sunset is as gorgeous as last night's. After my procedure, our foursome took a sunset hike. The sun's rays had already fled the meadow at the start of the hike. 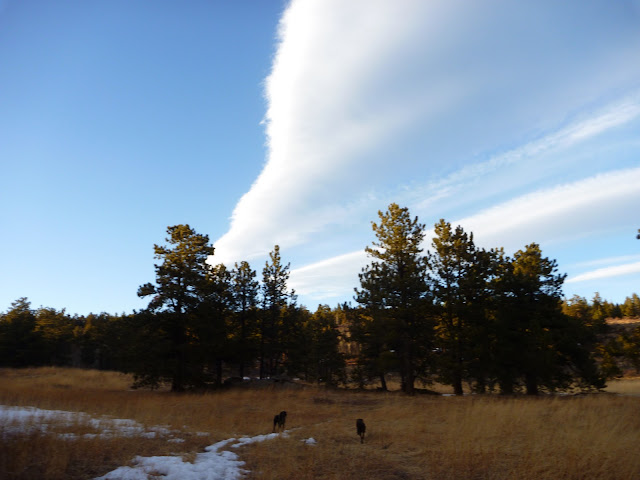 The frigid whipping wind seemed at odds with the fiery sunset. 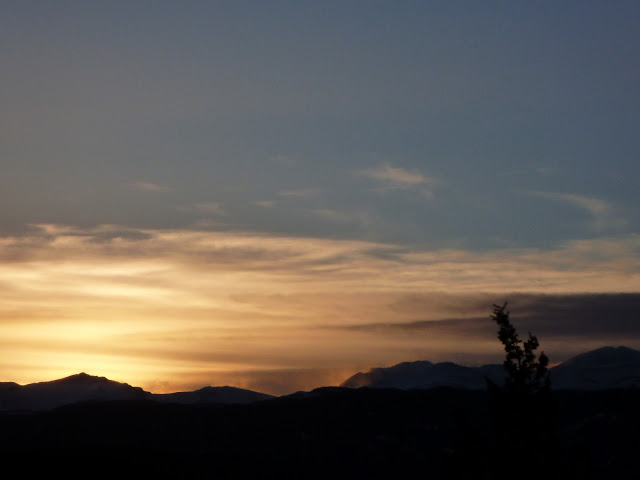 The wind was blowing atop the Divide, launching billows of snow into the air. 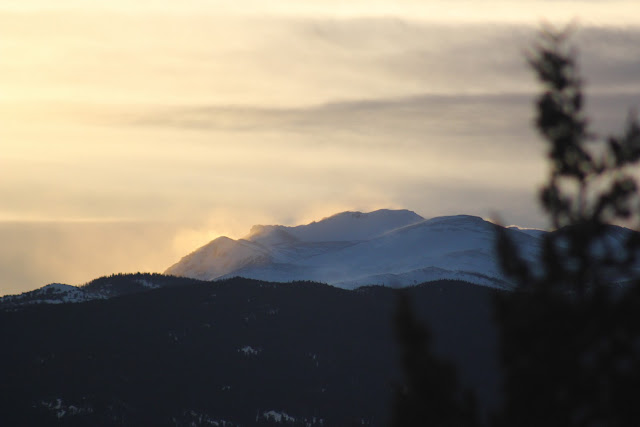 After the sun dipped below the horizon, the cloud bank hovering over our heads caught on fire. 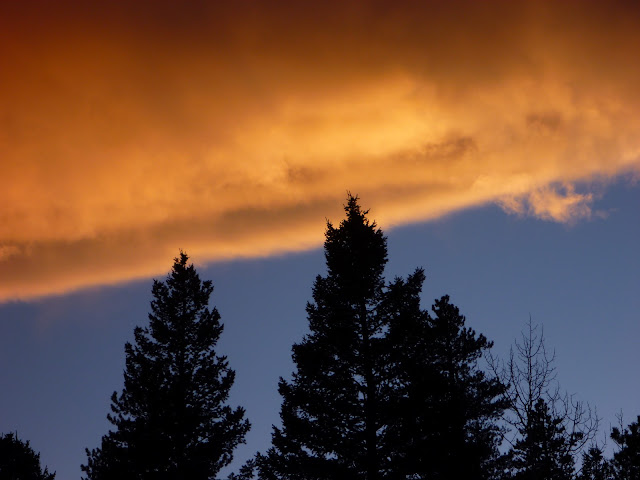 And, gradually, the lights went out on another day. 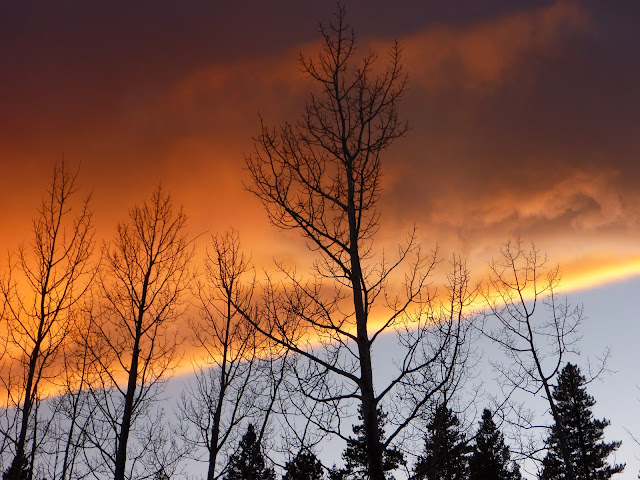 When my spine hurts so much, I am even more grateful for my wondrous surroundings and my pack.

I've read the comments about coyotes after my posts earlier this week highlighting wildlife camera photos of them. I understand the view that it's scary to have these predators among us. I worry incessantly about my dogs (that's why I train them obsessively). However, my viewpoint is that we humans are inexorably expanding our footprint in the natural world. If we don't take steps to accommodate carnivores like coyotes, wolves, bears, bobcats, and mountain lions in our world, they'll have no place to live. The Earth would be a darker place without them, and the environment would become even more out of balance, with prey animals like rats, mice, and deer multiplying unchecked.

At the same time, I feel deep sadness that pets have been lost to the predators that live among us. In some cases, these heartbreaking losses have occurred despite responsible owners taking measures to try to protect their pets. In our case, despite having coyotes next to our house almost every night for more than a decade, we've avoided that kind of tragedy. We don't have any magic solution, just extreme vigilance and probably a bit of luck (although we try not to rely on luck).

I'd like to answer a couple of questions that were asked about my coyote posts. First, I don't let the dogs mark scent posts that my wildlife cameras are monitoring because I'm hoping to capture natural behavior uninfluenced by my dogs. However, I've observed that my dogs mark over top of coyote, fox, bobcat, and mountain lion scat and scrapes on our hikes, particularly when those scent posts are on well-traveled trails. In fact, I tend to observe closely where the dogs mark and check to see which animal's message provoked them to reply. Some of the scent posts that I've monitored with my wildlife cameras were initially pointed out to me by my dogs.

I was also asked if our coyotes have become more brazen over time. I have not noticed any trend in their behavior in more than a decade of observing them. I have read, however, that coyotes are expanding their territories into more developed areas where people don't expect to be living with wild predators like coyotes. In our case, we knew that the wild animals "came with the territory" so we were never surprised by the presence of coyotes, bobcats, bears, and mountain lions around our house. It's become apparent to us that those animals view this land as their territory and view us as the interlopers who planted a house in the middle of their land. I understand the animals' point of view and try to be a good neighbor while still protecting my dogs and myself.
Posted by KB at 4:51 PM