Happy St. Patrick's Day! It's one of my favorite holidays. I've had chocolate labs in my life for 25 St. Patty's Days and counting! K and I warmed each other during sunrise this morning. 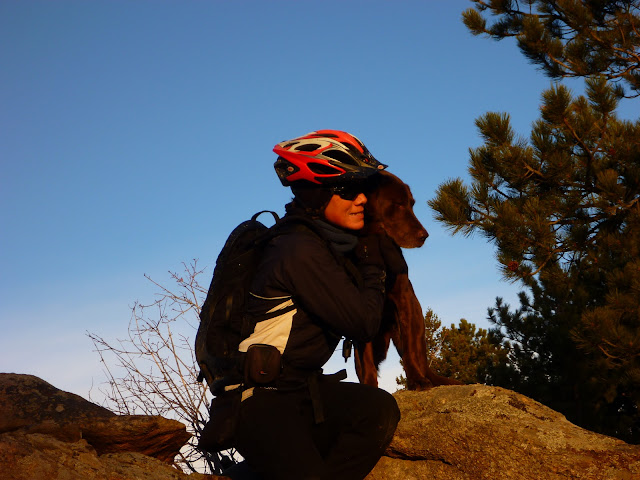 The sunrise, blue sky, singing birds, drumming woodpeckers, and touches of green on the ground had my spirits soaring this morning. K sparkled in the morning sun as she surveyed the meadows. 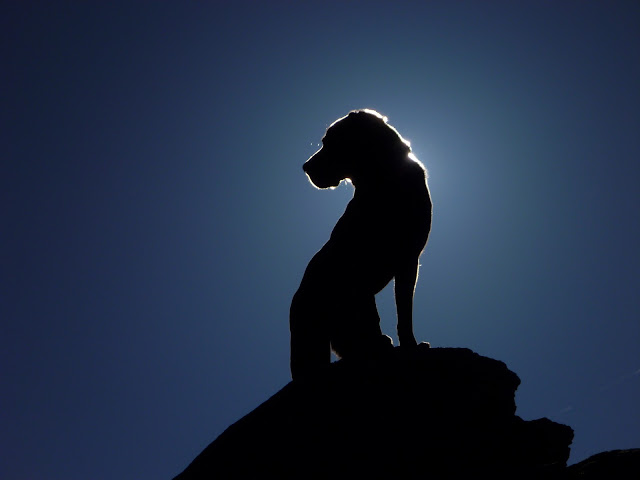 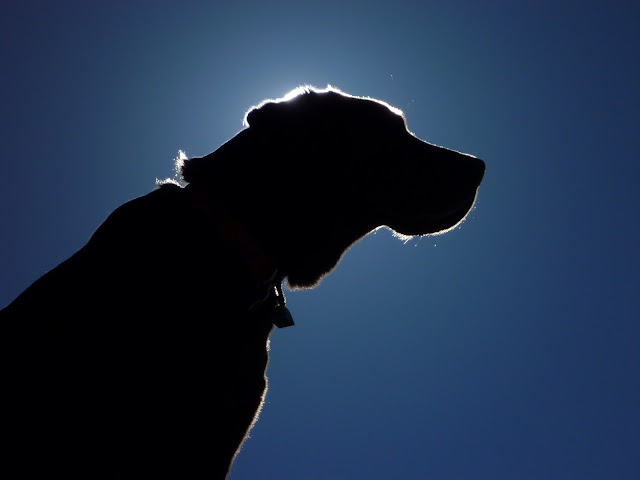 After K came down from her boulder, we rode through a meadow and almost crossed paths with the elk herd who had been hidden behind rocky outcroppings. It was a big herd who seemed indecisive about which way to go. They'd decided on southwest when I took this photo. It shows only about half of the herd. 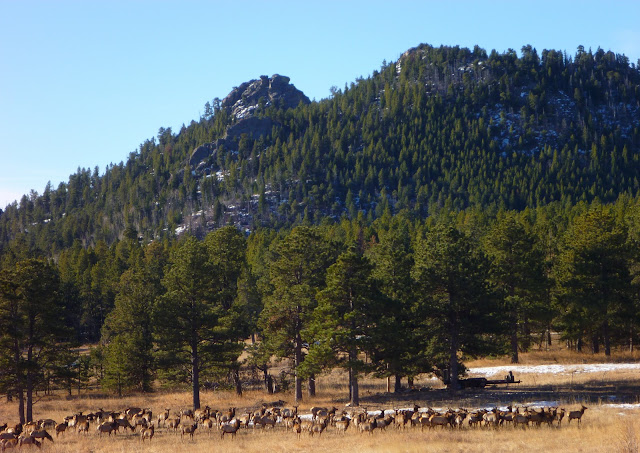 K has had tons of experience with encountering elk herds when she's off-leash. Because I've called her to me every single time we've seen the elk, I no longer have to call. Spotting the elk is her cue to come to me and then to maintain eye contact. She hovered near my studded bike tire while the herd passed, eyes pinned on mine but her nose twitched as she sampled the elk scent. I rewarded her lavishly! 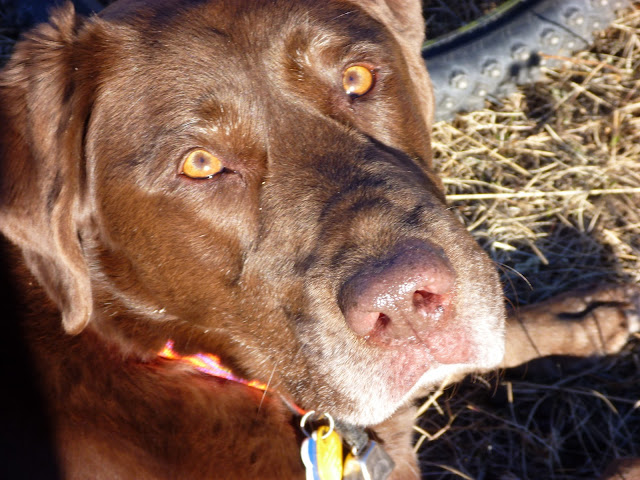 I've been asked several times about K's bell. She wears it for two reasons. First, when I'm mountain biking, I can keep track of her by the sound of her bell. She prefers to run to my right and slightly behind me, and, due to my neck fusion, I can no longer swivel my head to check that she's in position. The bell has solved that problem because I can hear her. The bell also forewarns wildlife that we're in the area. The unexpected thing is that we seem to "surprise" a lot of animals despite the jangling bell so I'm not certain how well it works. It's not an "official bear bell" but rather a bell that our local hardware store started carrying after wildlife officials suggested that bells on dogs might reduce dog-mountain lion encounters.

I especially like that the dogs wear bells when we're out at dawn or dusk because that's a time of intense wildlife activity. 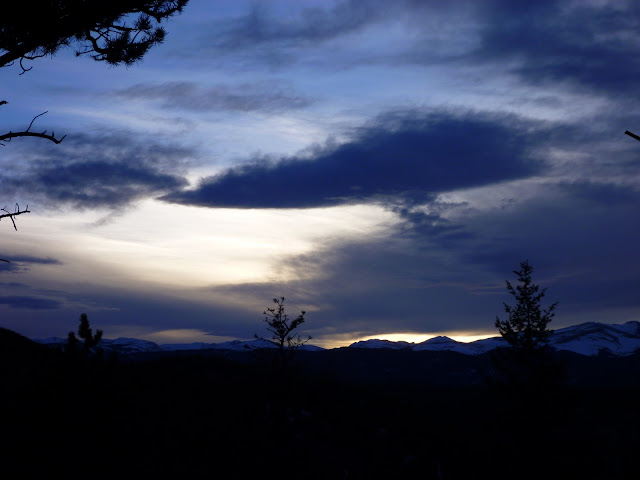 Last night, the deer continued their return to our forest. This doe stared at my camera for about three minutes - and my wildlife camera snapped about a zillion photos. She stuck her tongue out for this photo, which is why I chose it. 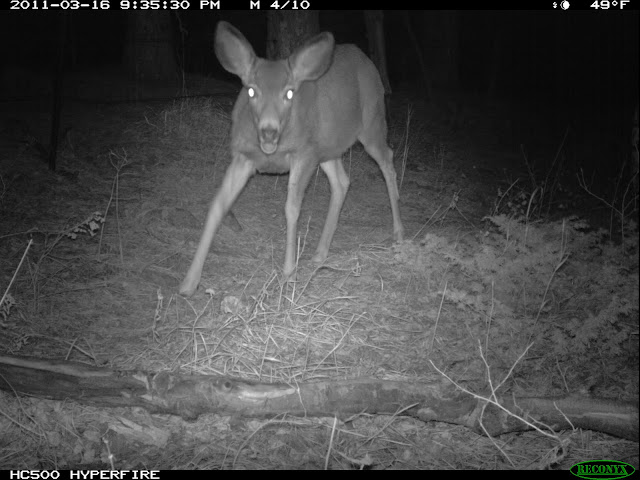 My friend, Joanie De Bever, spotted a pair of bobcats outside her house a couple of days ago and took three photos in quick succession. Seeing multiple bobcats together is extremely rare, as many of you know. I can think of three situations where they would be together: 1) if two competing cats meet and are having a territorial spat, 2) if a mother has kitten(s) younger than a year or so old, 3) if a male and female are courting.

In the photos shown below that Joanie kindly gave me permission to use, it seems like the two bobcats were moving in parallel and working together. Neither has an 'angry posture' or facial expression. The only hint of either of them being upset is that the closer bobcat's ears are pinned back in the first photo and the other bobcat seems to be staring stonily toward his cohort in all three photos. However, Joanie says that they didn't seem antagonistic toward each other and walked away together.

Neither cat looks obviously younger than the other although it's conceivable that one is an almost-adult kitten. It seems most likely to me that they were a male and female courting. 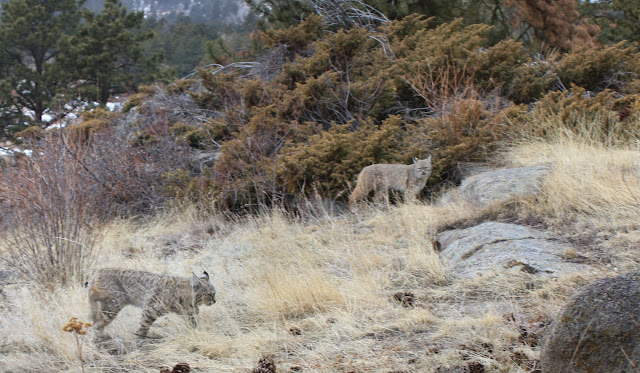 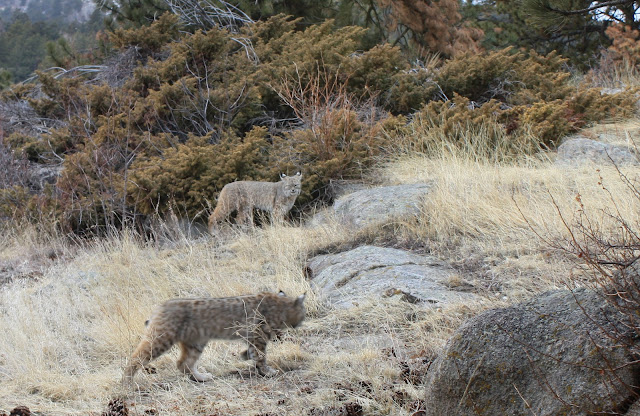 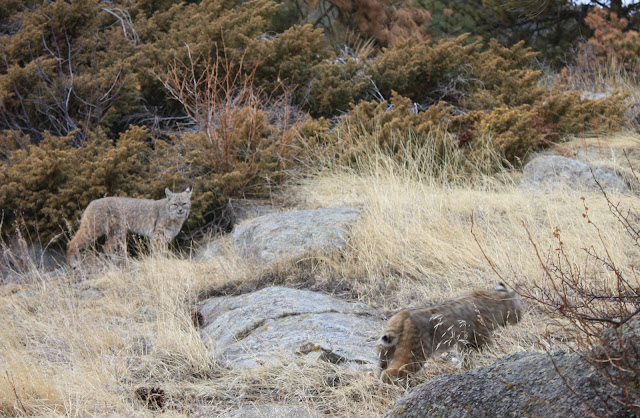 I was so excited to see those bobcat photos! Wow.
Posted by KB at 4:33 PM