K and I rolled out early into another frosty white day with a touch of blue sky. 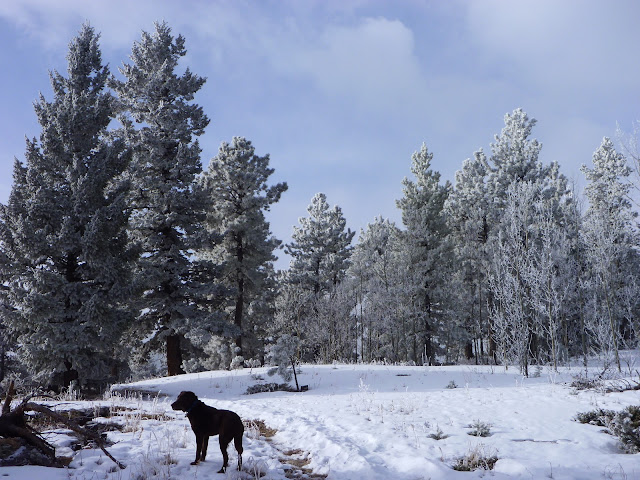 While we were in the early part of our ride, we didn't know it but a pair of coyotes were visiting a wildlife camera. I pointed this camera at a bobcat scrape and scat marking. Yesterday, a lone coyote passed the bobcat marking and stopped to sniff and then urinate on it.

Today, a pair of coyotes passed the camera at almost exactly the same time as yesterday morning. The leader of the pair sniffed the scent post... 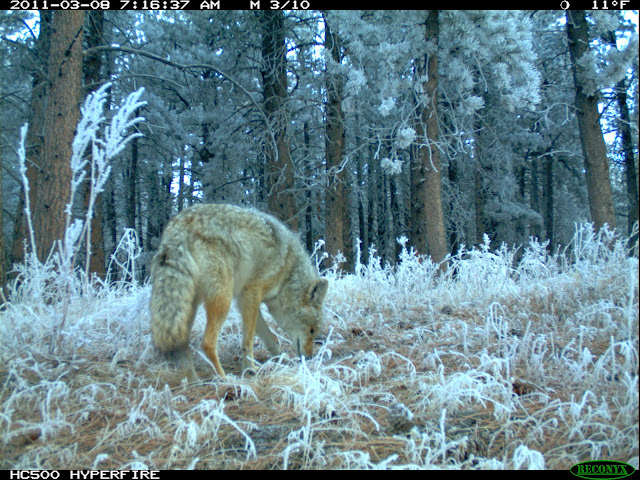 ... and decided to trot onward through the hoar frost laden grass without adding a comment. 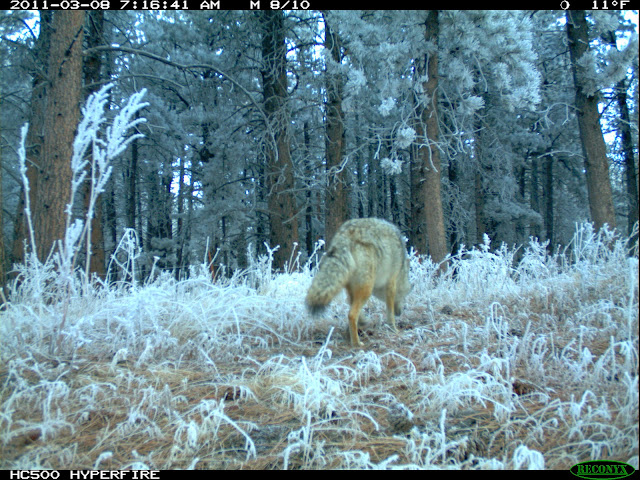 Then, the second coyote of the pair arrived on the scene, initially taking a route that wouldn't pass over the scent post. 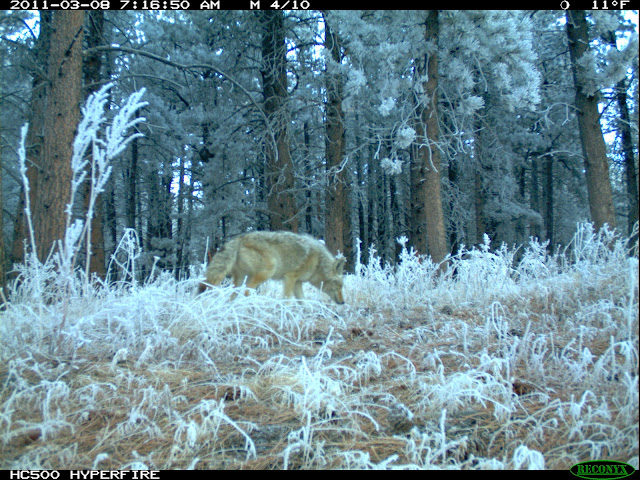 But then the coyote caught a whiff of it and stopped. 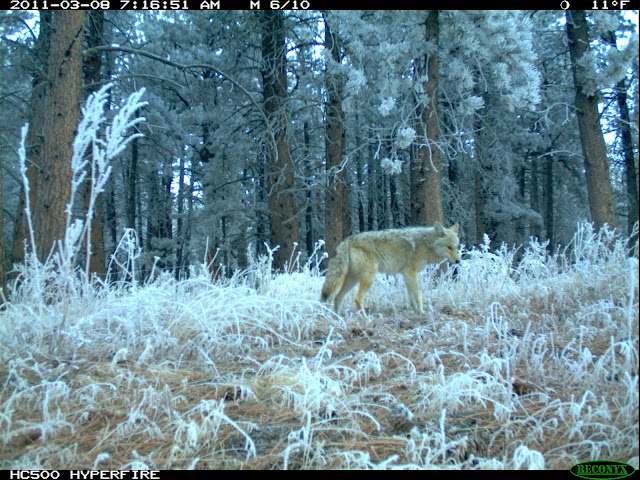 The agile canine turned on a dime and homed in on the message center. 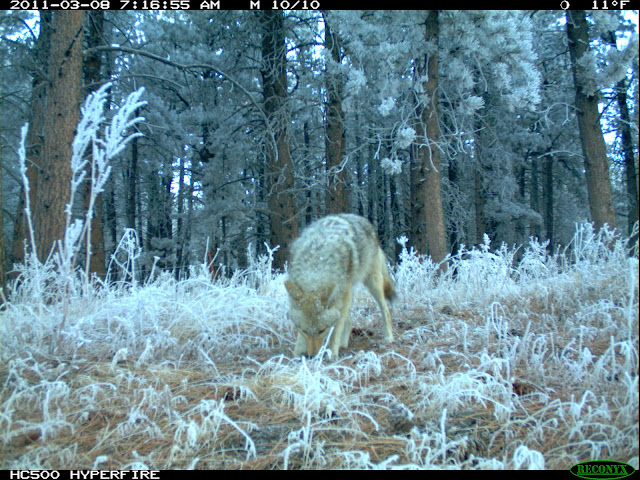 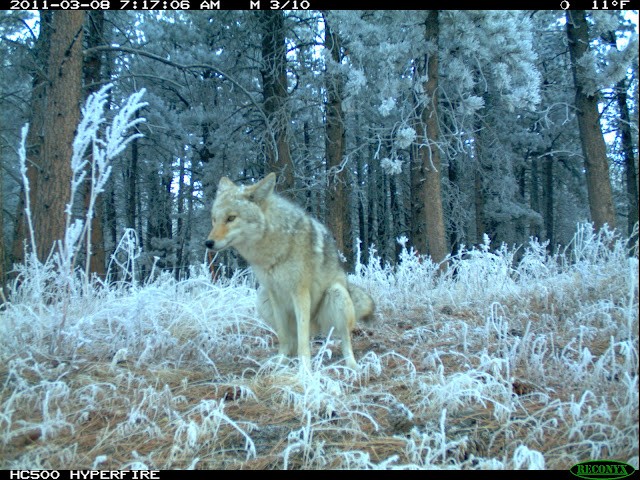 Then, the coyote turned and followed his/her partner. 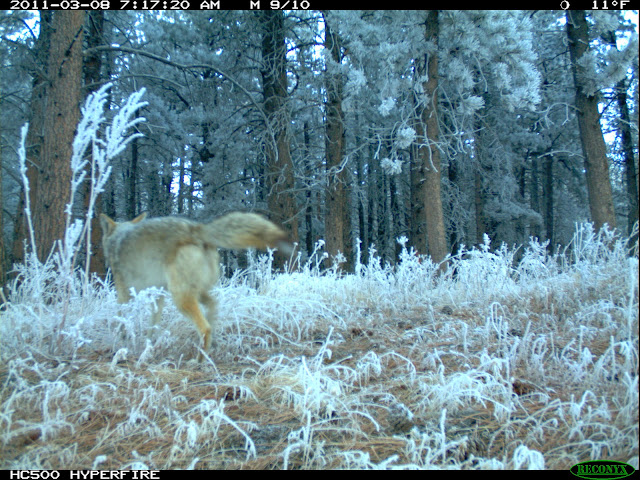 The question that I'm waiting to have answered is whether the bobcat will re-enter this scent-marking competition. Obviously, the coyotes feel the need to exert their authority over the territory, telling bobcat that they rule. Will the bobcat up the ante when he next passes this scent post?

K and I had no idea that these activities were underway. We were enjoying the glorious hoar-frost painted day. 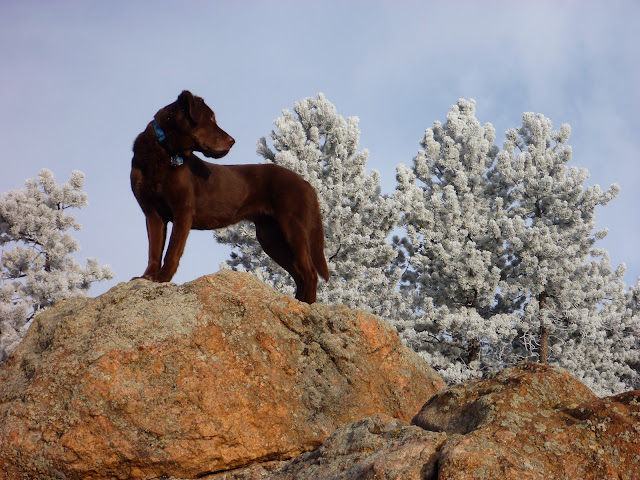 Although the sun didn't rise in a glow of orange this morning, the light was sublime early. 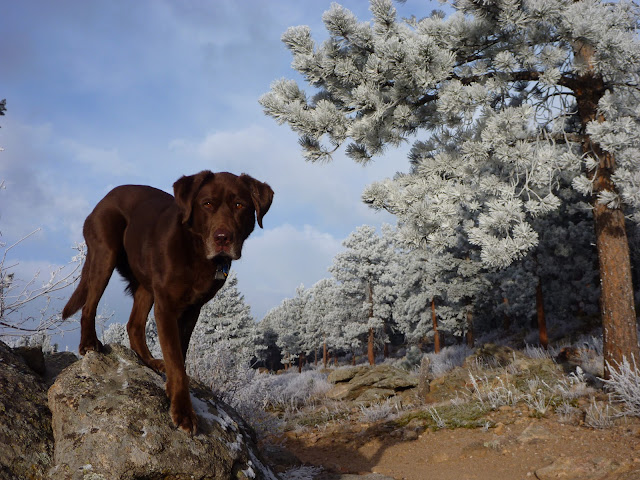 K and I hung out enjoying the views for a few relaxing minutes. 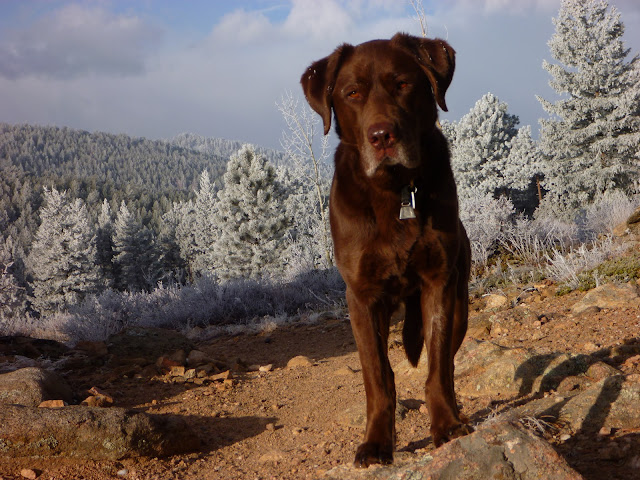 Soon enough, we were rolling onward, checking wildlife cams and enjoying good riding conditions. It was so cold this morning (around 10°F when I left the house) that I could roll across the crust atop deep drifts without breaking through. I love my fat-tired snow bike!

As we were finishing our ride, we rolled through a meadow and faced something that we haven't encountered in years. At least two coyotes tried to lure K across a meadow. They have a choreographed routine where one coyote comes out and acts playful, trying to get a dog to chase the coyote into a trap where the rest of the pack is waiting. Back when K was an almost grown-up puppy, she fell for this luring routine on one occasion but, thankfully, the pack didn't catch her. Today, K surged about 15 yards toward the coyotes and stopped when I called her. She paused, staring at the coyotes, for a moment seemed to stretch on forever, before finally turning and running to my side.

A coyote watched from a distance. I'm sorry about the poor quality of the photo. My point-and-shoot doesn't have much zoom. 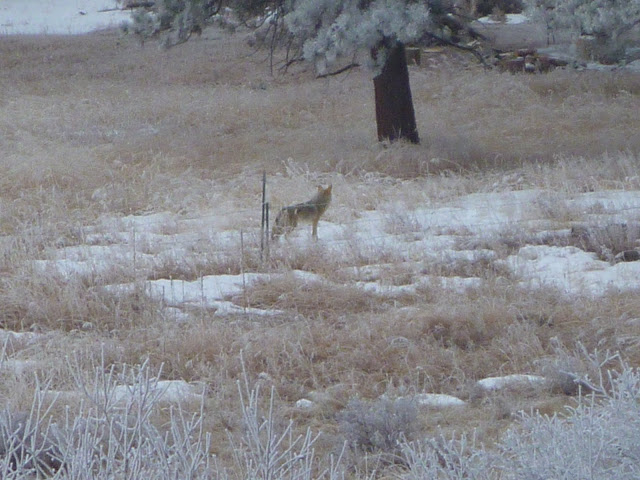 The visible pair of coyotes (perhaps the same ones as we saw on the wildlife camera earlier in this post) didn't disappear. They kept emerging from behind thickets and pine trees, always about 75 yards away, but tempting to K despite their distance. I gave K a stern order to "heel", and we exited the area.

We have spent innumerable hours preparing for a coyote luring ploy, and I was overjoyed that K passed with flying colors! I strongly believe that it's the responsibility of human dog owners to protect their dogs against coyotes either through training them or by leashing them... rather than blaming the coyotes and slaughtering the wild canines for their "sins".

Fortunately, thanks to all of our training, K and I finished our ride safe and sound today!
Posted by KB at 7:15 PM