Yesterday's last two photos involved the can of pepper spray attached to my hip belt in the photo below. I've carried a canister in a holster on almost every bike ride and hike for the past decade. I started carrying it as mountain lion protection but I've never needed it for a lion. They always run when they see me.

Over that decade, I've pulled it out of the holster twice, once when K, as a a yearling, fell for the luring behavior of a trickster coyote, and then ran to me with an entire pack of coyotes chasing behind her. K beat them to me, and I screamed and yelled like a lunatic as I pulled out the pepper spray. The pack veered away from me and K and back to the darkness of the forest. The second time that I pulled the spray out of the holster was against a human who was scaring me on a remote trail. I didn't use it but I was glad that I had it. 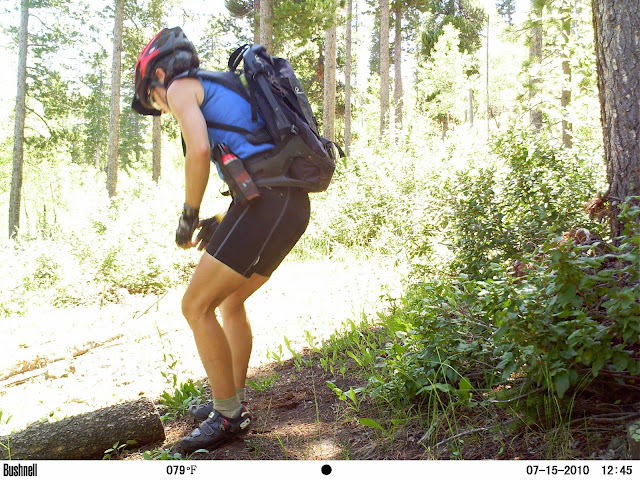 Yesterday, after returning from my snow bike ride with K, I was getting her breakfast ready in the kitchen, still wearing my little black backpack with the pepper spray attached to it because I planned to ride some more. As I turned to leave the kitchen, the pepper spray fell out of the holster. By some stroke of terrible luck, it landed on the tile floor in such a way that the safety was knocked out of place and the can triggered. It launched pepper spray into the kitchen.

We quickly moved the dogs into a bedroom with the door closed and towels covering the crack at the bottom of the door. I tried to go back to the kitchen to begin to deal with the clean-up, and I was immediately overcome by coughing. I retreated outdoors. When I tried to go inside again, it became clear that there was no way that I could go into the main part of the house with the spray in the air. The Runner remembered that he had an industrial respirator in the basement and retrieved it.  He was able to go into the house with the respirator on. He opened all the doors and windows and ran powerful fans pointing outdoors.

The dogs remained fine because the bedroom was completely sealed off from the spray.

Finally, given my asthma and extreme reaction to the spray, the Runner told me "to go away and do something fun for a long time". So, I did. I took my snowbike up high, riding it in mountains over 10,000', and enjoying panoramic views. I particularly loved looking *down* onto the local ski area. On my way home, I bought myself a respirator and cleaning supplies that were said to be best for removing the pepper spray residue that was undoubtedly settling into the nooks and crannies of our house. When I arrived home, the Runner laughed at my ridiculous looking outfit and snapped the photo of me in my bike gear looking like an alien in my respirator and sunglasses.

This morning, when we first woke up, the air in the house seemed much better. K and I headed out for our usual bike ride on the trails. She did her yoga in the rising sun. 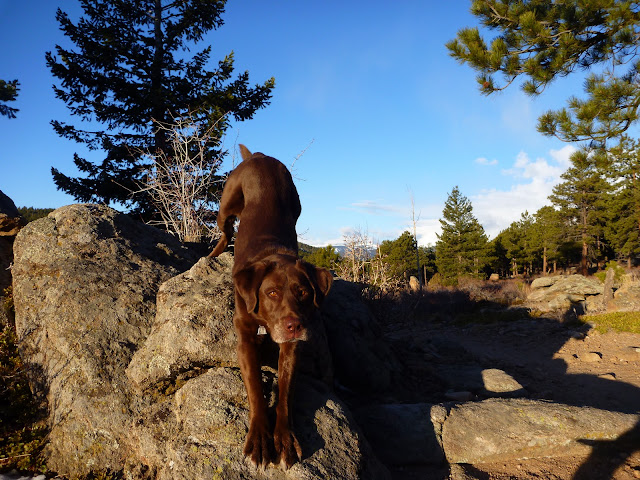 Then, we just relaxed and enjoyed the warm and glorious day. 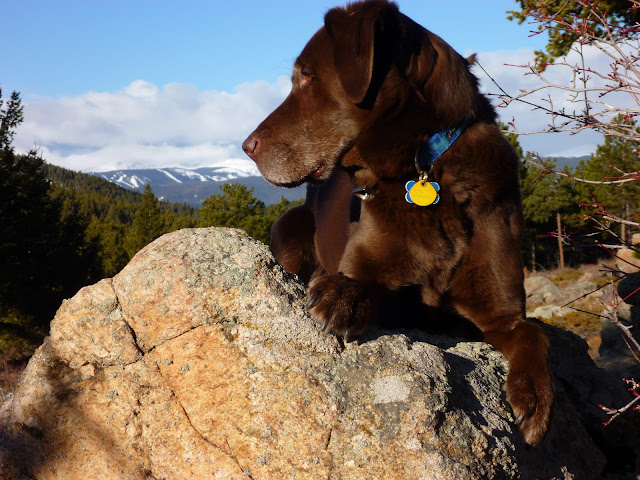 We spun around the trails that were icy in spots but overall better than they've been in weeks. K seemed so full of exuberant happiness that I grinned from start to finish.

After I dropped K off at home (and didn't explode any pepper spray canisters while I was there), I headed out into the amazing spring day. I could see storm clouds gathering on every horizon but I was riding under a blue hole in the sky. It seemed like my lucky day. 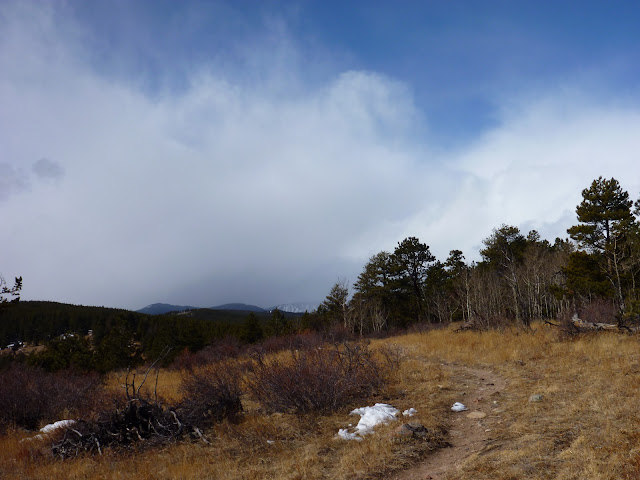 I've been feeling sluggish and sore since my fall on the ice so I took it easy, stopping to photograph anything that caught my fancy.

I saw a dried Sulfur flower from last summer that glowed orange in the toasty sun. When I really notice the details of the golden/brown meadows, I realize that there's beauty hidden in them even now, in the midst of winter. 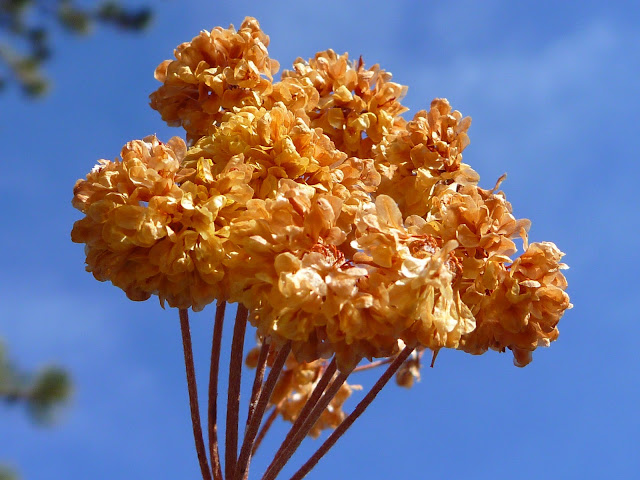 Later in the ride, I saw an unknown beautiful dry flower. 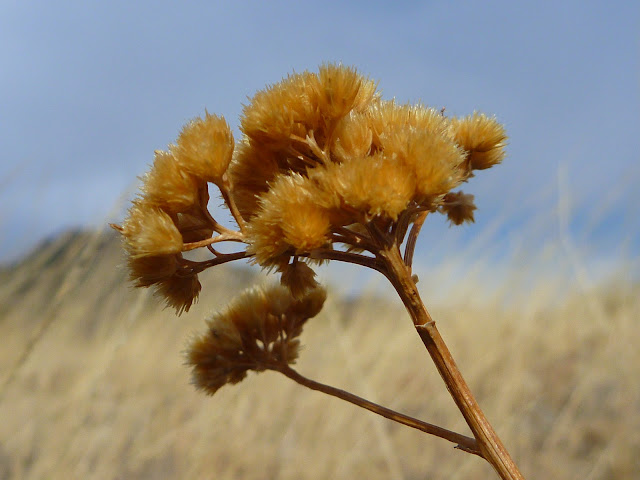 As I rode, the blue hole over me became enshrouded in storm clouds. I ended up riding home in a snow squall that pelted icy snow at me as I rode as fast as I could. It's March in the Rocky Mountains. One minute it seems like a lamb and the next minute it seems like a lion!
Due to a physical therapy appointment for treatment for my ailing spine, the Duo and I missed our sunset hike but the skies at sunset were gorgeous last night. 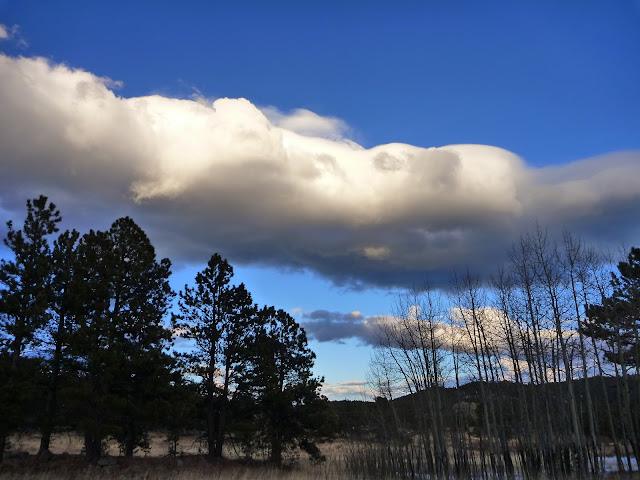 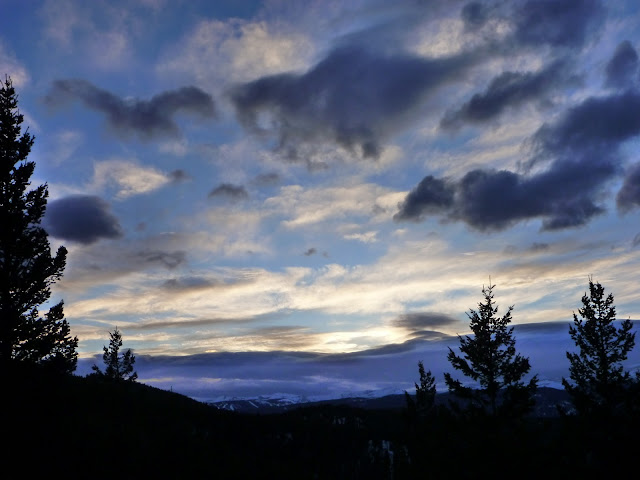 Just to give you a giggle, you might want to know that I'm wearing that crazy-looking respirator to write this post on my laptop computer! My asthma-addled lungs do not like the residual pepper spray in the air. I wonder how long this will go on?
Posted by KB at 7:41 PM