A mountain lion walks nearby

Our largest cat is known by at least three names: mountain lion, puma, and cougar. In Colorado, people tend to call them mountain lions.

I tracked a mountain lion extensively early this winter before the snow was too deep to inhibit travel in much of our forest. On three occasions that he came through our slice of the forest, he passed close to a large Ponderosa Pine tree. During a snow melt, I discovered a big pile of mountain lion scat at the base of the tree. It seemed an auspicious place to post a wildlife camera.

I've waited for two months with no animals passing this camera. On Sunday afternoon, a mountain lion sauntered through the scene. 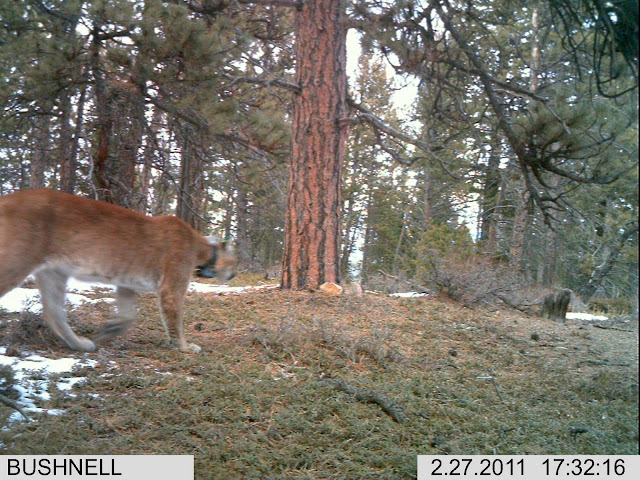 The Ponderosa Pine is in the center of the photo. The lion lowered his/her small feline head while passing the tree but didn't directly sniff the pile of scat. 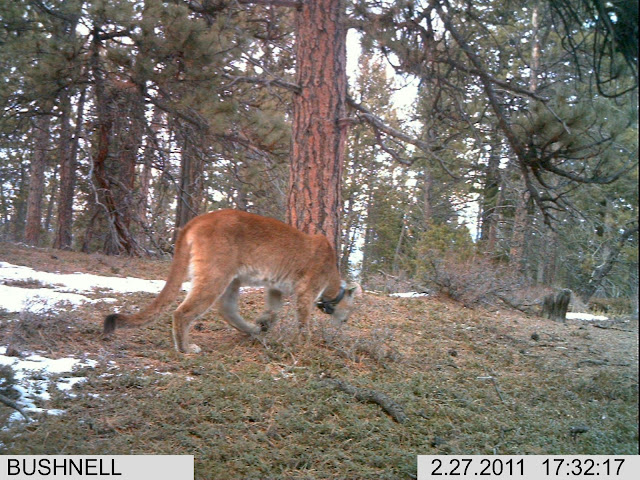 Then, the lion kept walking... I hate seeing the big GPS collar around the lion's neck but it does appear that this lion is getting plenty to eat despite the collar. The collar is for a mountain lion study that's underway in our neck of the woods. 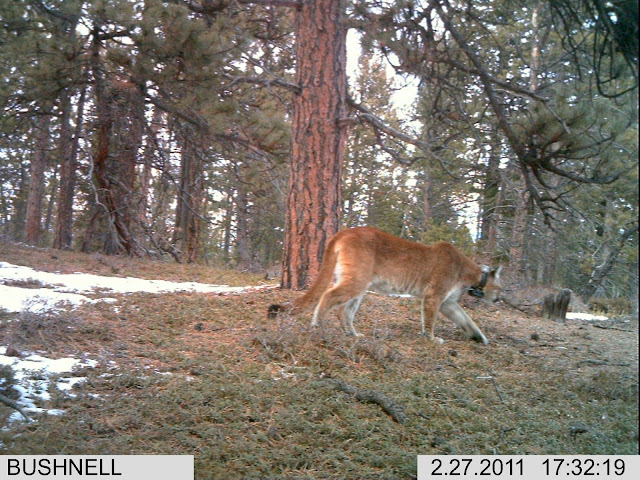 I haven't checked all my cams yet but I suspect that this was the only one that captured photos of the lion. Unfortunately, the snow has melted substantially since the lion walked through. I followed the cat's trajectory and found these tracks. They're obviously too melted to see any details of the paws but the step length was correct for a lion. They were heading downhill toward where the elk herd was grazing that evening. 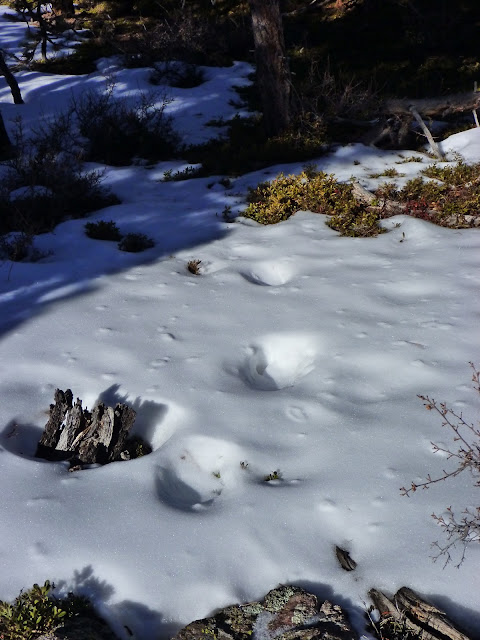 I believe that I've photographed this lion previously in our neck of the woods. For some reason, she looks like a female to me - but there's no scientific basis for that impression. Female lions have kittens under their care for almost their entire adult lives, except during the short months between sending a litter of kittens off into the big world and giving birth to the next litter.

So, today, I also looked around for tracks of kittens near the big tracks. I did find two sets of bounding tracks but, due to the snow melt, I have no way to know if they were mountain lion kittens or something else entirely. If this lion has kittens, I suspect that I'll see them on a wildlife camera someday.

It was interesting to realize that the Labraduo and I were nearby when this lion passed our trail system. I took the photo below within five minutes of when the lion's photo was taken. I recognize the spot, and we were about a quarter mile from the lion. Thank goodness that lions almost always live invisibly and peaceably among human and dog societies. 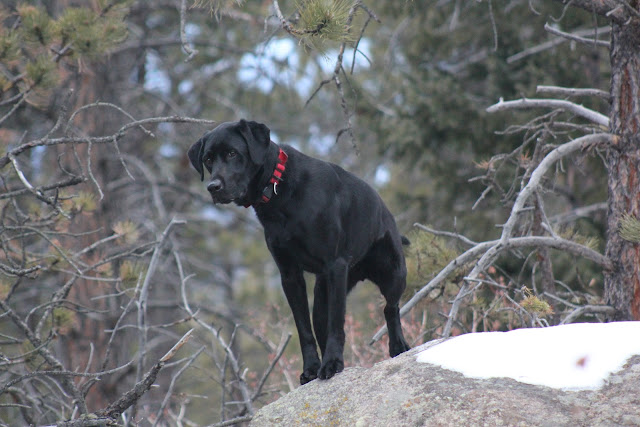 This morning, I pedaled and K ran to our exposed plateau just after the sun rose. I took a photo to capture how a golden sunrise reflects on her eyes and fur. Unknowingly, I also captured the tiny shadow of K on her boulder far off to the right in the photo. 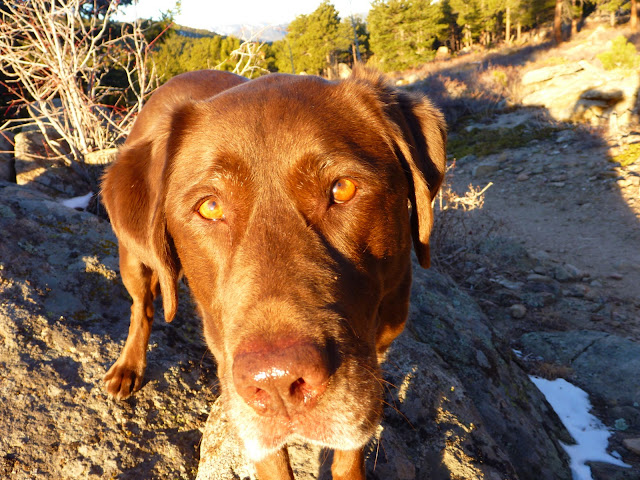 Just after the sun rose, my front tire went flat. Since I was so close to home, I decided to head back and change the tire in the warmth of my basement rather than in the 25°F air. But first, one more photo of K in the sunrise light. 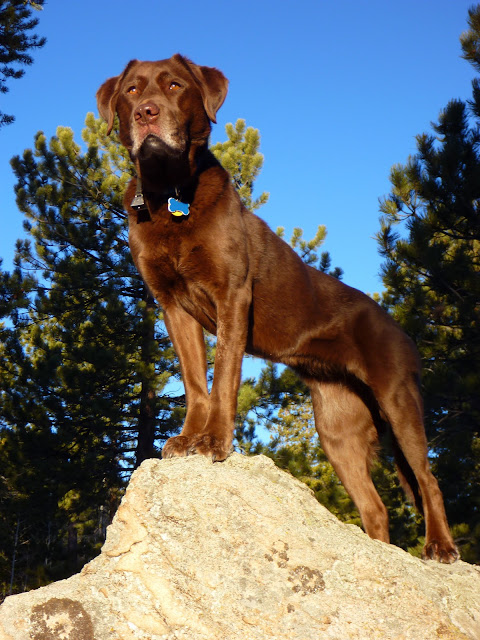 Since K had her bone infection and toe amputation, I've had this niggling worry that maybe she didn't really want to go on my bike rides. I thought that it was possible that she secretly preferred to take it easy. Well, my worry was put to rest this morning. As I headed home after only 10 minutes of riding, K refused to go with me! She seemed appalled. Her expression said, "What? That's it?"!

I took her out for some more riding after a fast tire change with the Runner's help. I'm embarrassed to admit that a runner is faster at changing flat tires than I am!


It was warming up fast, and K sated her thirst with cold snow. 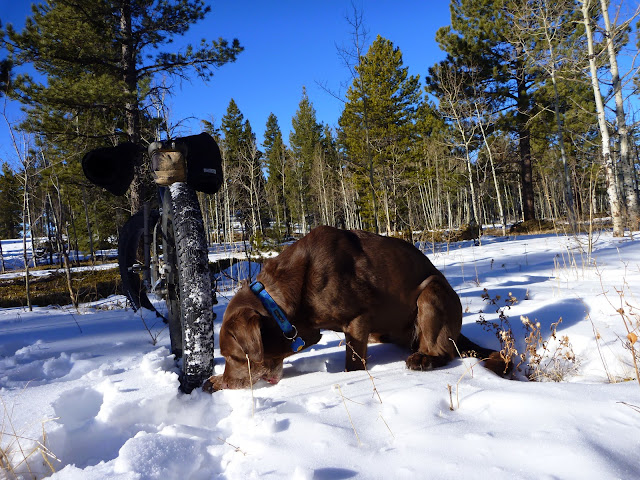 She satisfied her hunger with the sparse crop of rose hips still on the bushes. She picks them off the bushes very carefully, avoiding the sharp thorns on the stems. 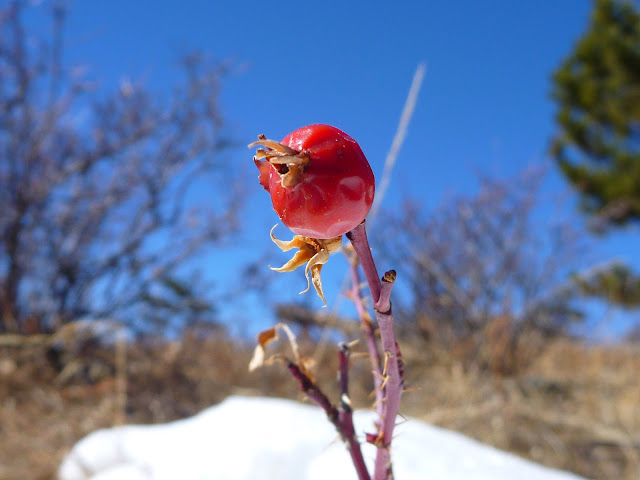 We had a fun ride in amazingly springlike weather. I know that we are going to have some major snowstorms in the next couple of months but I revel in each of these days so filled with promise of a warm and glorious summer on the horizon.

And, for me, any day that I get wildlife camera photos of a mountain lion is a good one! 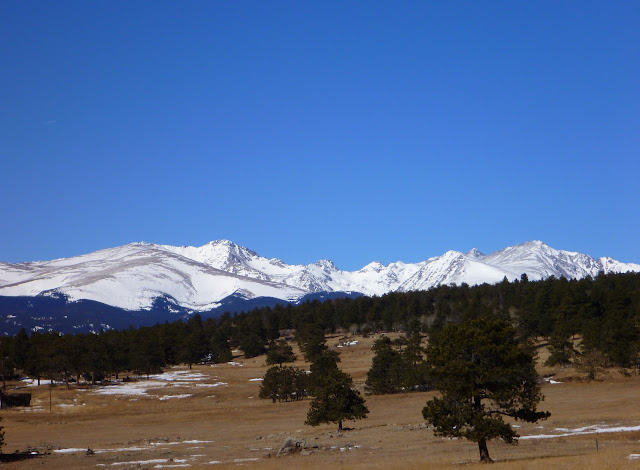