This morning, the coyotes were on the prowl again. This camera caught one individual but another camera caught a terrible photo of a pack on its periphery. 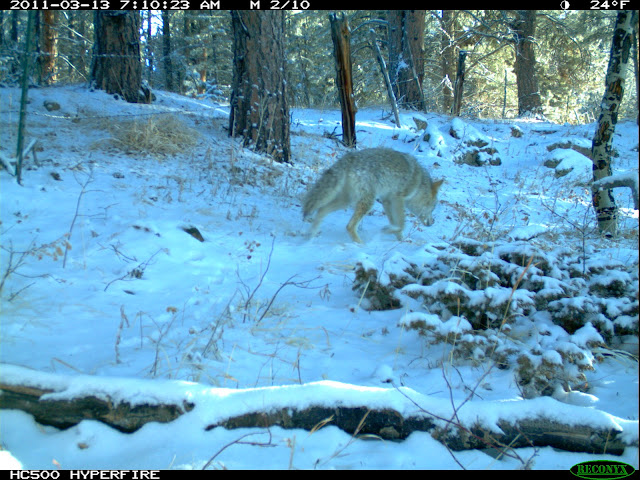 K and I rolled out early, before the coyote shown above passed the camera, into a couple of inches of fresh snow. We saw the sunrise but the world didn't brighten much until the sun arced high into the cloud bank to our east. 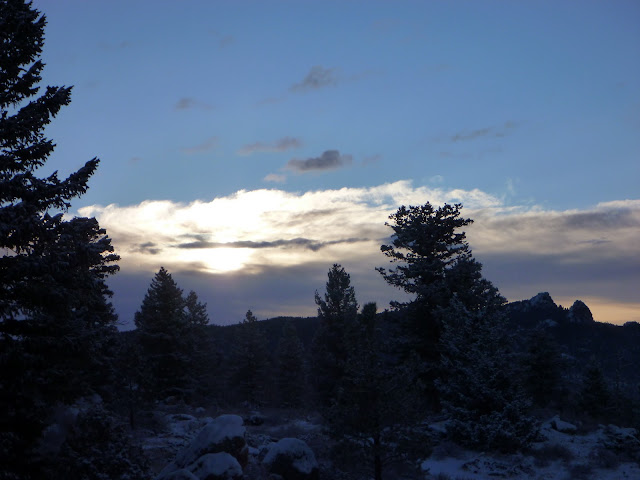 K's fur glowed in the sunrise, a sight that is getting rarer as sunrise races earlier. 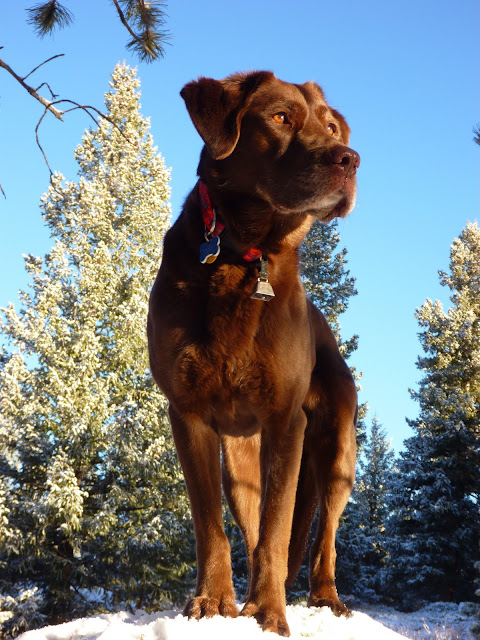 We started rolling along a forested trail, not a route that our coyotes commonly travel. They tend to like the meadows rather than the deep forest. Nonetheless, a few coyotes appeared like tawny ghosts in front of us on the trail. K followed her instinct and bounded after them as they fled. 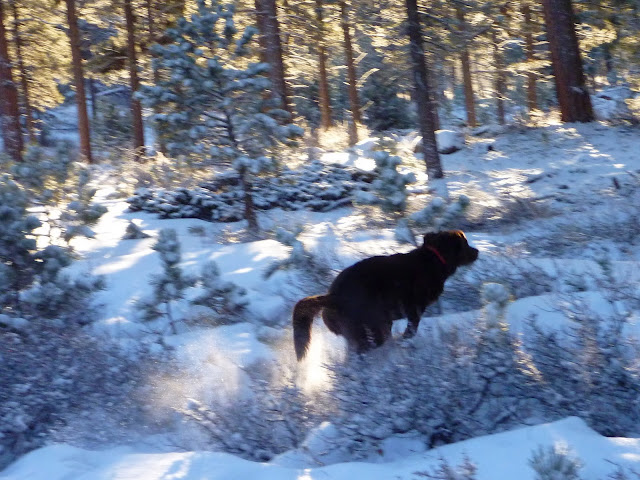 I screamed for K to come but lost sight of her almost immediately. I kept yelling as loudly as I could but my voice rapidly gave out on me. When K didn't reappear, I escalated to a full-blown panic. I left my bike on the trail and started running, following the canine tracks. I already had the worst possible visions in my head. Then, the coyote pack started yipping and howling from fairly nearby. My anxiety level rose with each yip.

Within about 20 yards of following tracks and continuing to try to yell with a nonexistent voice, I saw the coyote tracks go one way and K's tracks make a U-turn back toward where she'd started. I turned around, and she emerged from behind a bushy pine tree.

The tracks told the story. K hadn't followed the coyotes for more than a few yards and had immediately heeded my call. But, probably because I sounded so completely freaked out, she didn't come to me. Instead, she stood still, silently watching me, hidden behind a tree.

When I saw her, I first felt a veritable tidal wave of relief. Soon, however, I felt another surge of adrenaline as I looked at this dog who I love with all my heart. The adrenaline brought anger with it - anger at the coyotes and anger at K for hiding from me. I managed to suppress it... and just be grateful that my girl had actually obeyed me and hadn't chased the coyote pack. 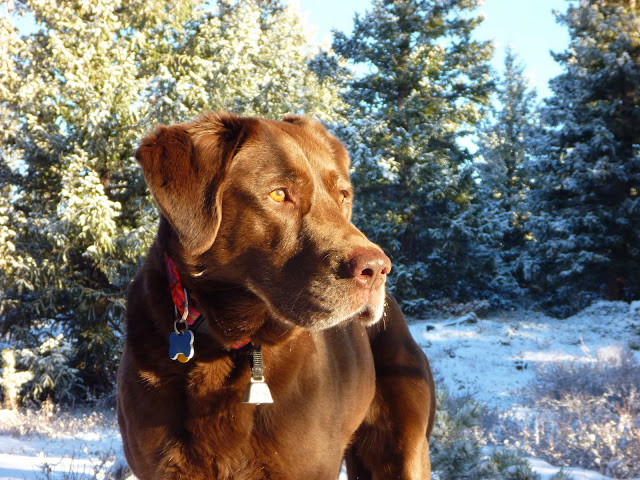 I was shaking so hard that I sat in the snow with K for a rest before we proceeded. She seemed unsure about me... because I'd been screaming like a lunatic just a few minutes earlier and she's an easily scared dog. Her fearfulness has improved so much that I don't mention it often here - but her hiding act today reminded me of how sensitive she is. 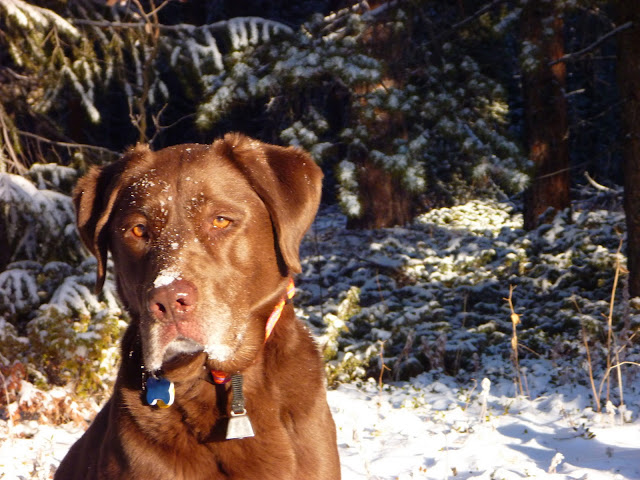 It's risky out there in the woods, but even as we sat quietly in the aftermath, I was grateful to be sitting in the freezing cold snow next to my chocolate sweetie in the wilderness. I simply love being in the woods with my dog.

Soon, we were on our way again, with K in a tight heel next to my bike. As we restarted, K expressed an interest in the coyote tracks left behind by the encounter, causing me to start to become apoplectic again. I tried to keep the fear and tension out of my voice as I reminded her to heel. 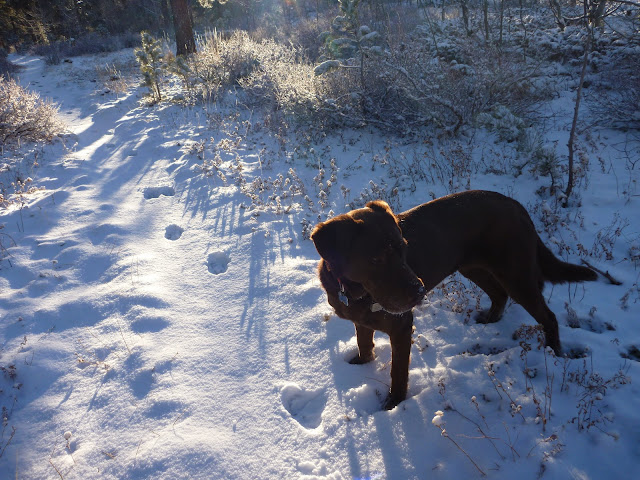 Soon, we'd looped out of the forest and I pedaled toward the meadows, where I always obsessively scan for coyotes. We stopped at an overlook to survey the meadows below us. 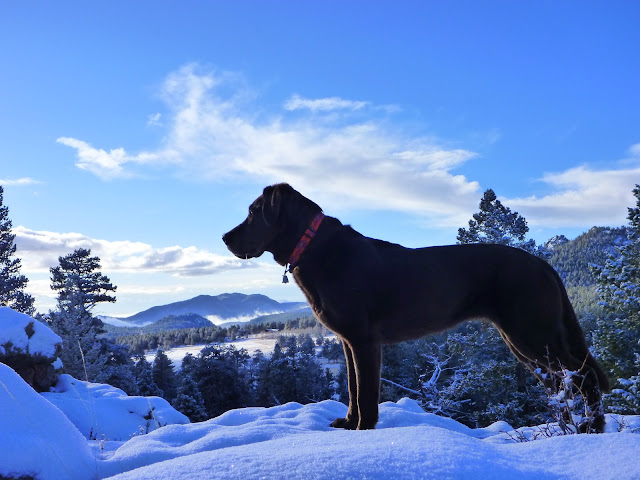 In the meadows, we didn't see any wild canines but we saw tracks. 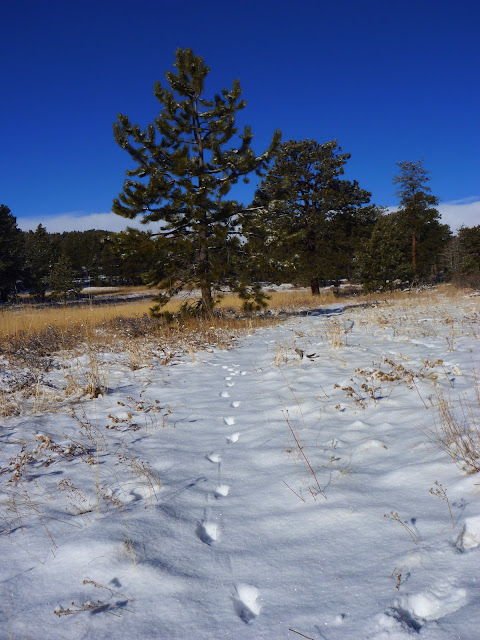 The rest of our ride passed peacefully despite a maze of coyote tracks telling a story of a pack working hard to hunt rodents.

As I look back on the coyote encounter, I think that it was an accidental crossing of paths. K and I were silent so the coyotes didn't know that we stood in their path. The entire pack approached us as if they were on a beeline to their next destination. As soon as the coyotes spotted us, they fled, with no luring behavior or other shenanigans. So, as I mull it over, I don't blame anyone, except maybe myself, for freaking out so much that K was afraid to come to me. But, no harm came from that mistake aside from a couple of minutes of intense fear, and I learned my lesson. I need to sound more composed in emergencies, for K's sake.

For probably the first time ever, I felt relieved to lock K into the safety of our house and head out solo on my bike. It wasn't great riding due to the sloppy layer of spring snow that the sun was rapidly transforming to slush.

But, the sky was gloriously blue, and more signs of spring caught my eye. The buds on willows lining a stream had burst into furry catkins since I passed them yesterday. 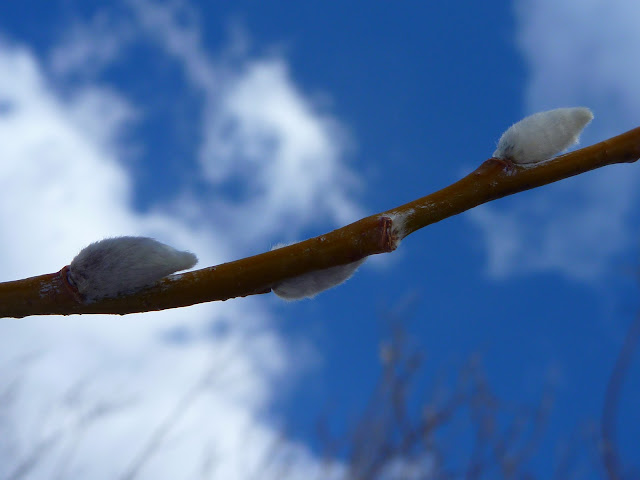 I was so delighted that I gazed at the catkins for a long time. 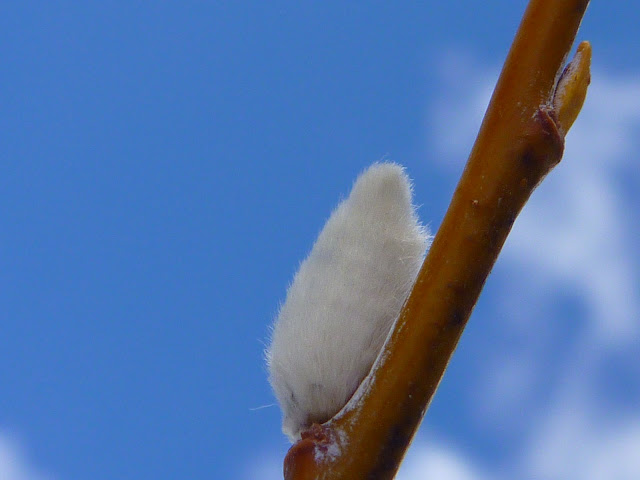 An adjacent willow had also burst to life. 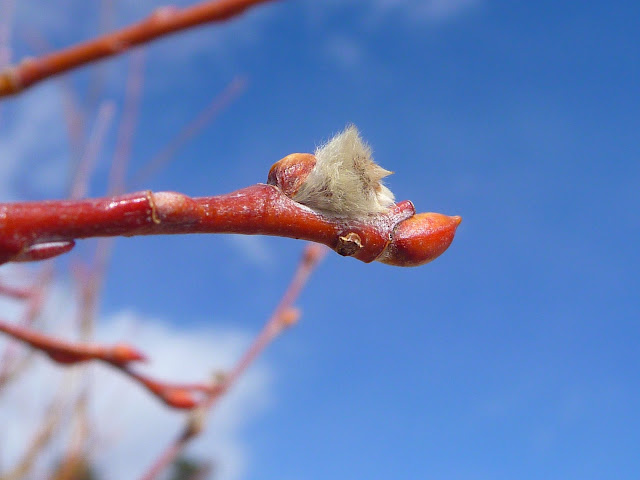 High in the mountains, we have to "make do" with these small signs of spring for months while many of you have flowering plants and leaves on your trees. Indeed, we often get multiple feet of snow between now and the end of May so more winter is in store for us!

Most of all, I am thankful that my K is safe and sound, ready to enjoy spring with me.
Posted by KB at 5:01 PM