Little Hachi is a constant source of smiles in our house right now. After we took the tunnel out of storage (see photo below), we haven't been able to put it away because Hachi adores it so much. He does sprints around the living room that often include trips through the tunnel! 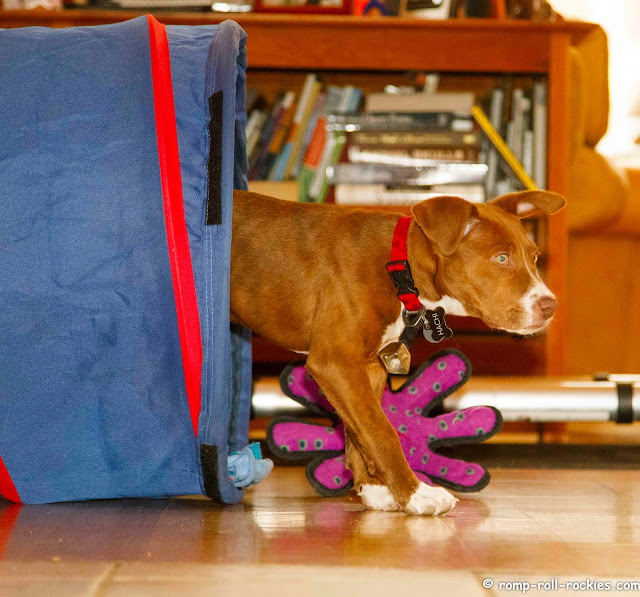 He appreciates every last toy that we have out. Our living room seems to be filled with toys right now, and we smile about it. 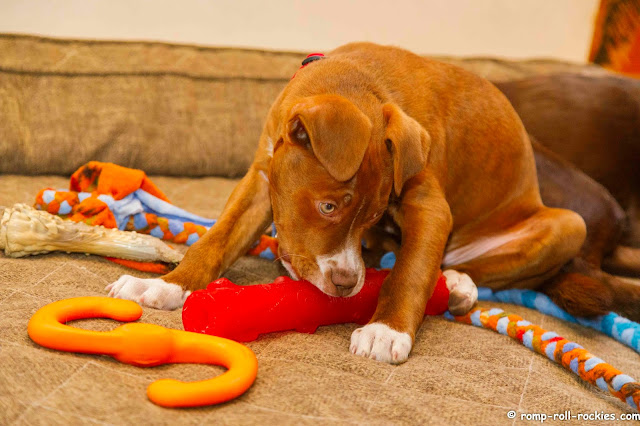 I have been having a blast training him. He is our first tiny puppy since I became confident with many aspects of positive training. It is an eye opener to see how much a tiny puppy can learn, as long as I don't overwhelm him.

I made a video of some of cute behavior he's done during training. I've been using a clicker and treats to teach him to touch his nose to the end of a pointer. With the method that I was using ("shaping"), I didn't try to show him what to do. Rather, I relied on his puppy curiosity to lead him to sniff the end of the pointer, and I clicked/treated him for touching his nose to it. I definitely let the session go on too long because he got really silly about it. That's the first clip of the video.

The second clip is a continuation of something that I started very early, when he was a bit over 8 weeks old. I taught him that he could earn treats by making eye contact with me. I've gradually made that game more difficult so that he lies in a down, and I put treats where he can see them. In this video, I used CHEESE as his pile of treats to earn, which he LOVES. He went a little crazy over the sight of a pile of cheese on the ground in front of him. It is incredible to me that, without any prompting by me, he remembers how to earn the cheese.

The third clip is a typical bout of play among the three dogs. Enjoy the video.