Thankful Thursday - Our Puppy and Our Big Dogs!

Hachi is changing so fast that it makes my head spin. I thought that you might like to see a bit of him in action, both during training and play.

I made a video to share with you. In the first part of the video, I show you how Hachi used to "demand bark and growl" because he wanted to earn treats but he didn't know how. I think that all of his noise was simply frustration.

As you watch the first part of the video, imagine that the video camera is on the floor at Hachi's height, and I am standing behind it. Watch for him to flick his eyes upward - that is when he meets my eyes. I click and give him a treat every time he looks at my eyes. Then, I show you a few minutes later - look how fast he learned! And he's barely making any noise at all after he's figured out that he can get treats by making eye contact.


We are so grateful for almost everything about Hachi. Most of all today, we are thrilled to see R starting to really play with Hachi.

As I watched them starting to play for the first time, I realized that R cannot see Hachi very well. He'd open his jaws and bare his teeth but his aim wasn't very good for a play bite.

In response, Hachi laid down on his back, stayed still, and played from that position. I believe that our puppy was "self handicapping" like adult dogs usually do to help puppies not to be afraid of them. Somehow, Hachi knew that their roles needed to reverse for him to get the almost-blind R to play with him. It was wonderful to see. 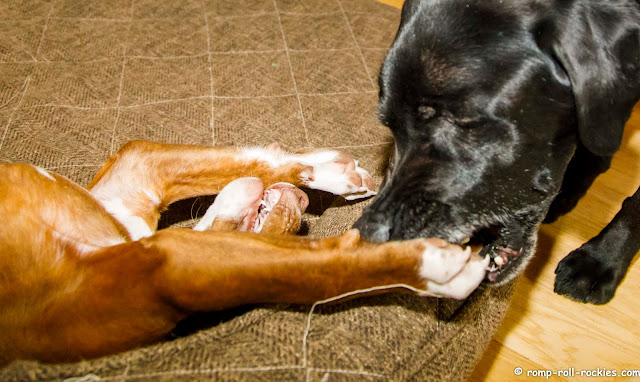 It sometimes looked like R was blowing Hachi's ears back with his roars! 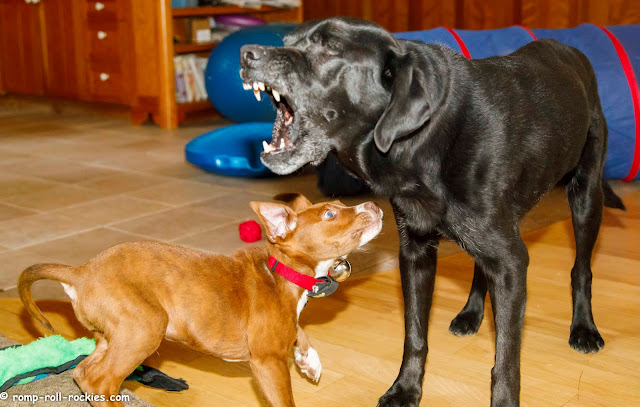 The two boys played and played. It was SO cool to see Hachi adapting to R's poor vision. 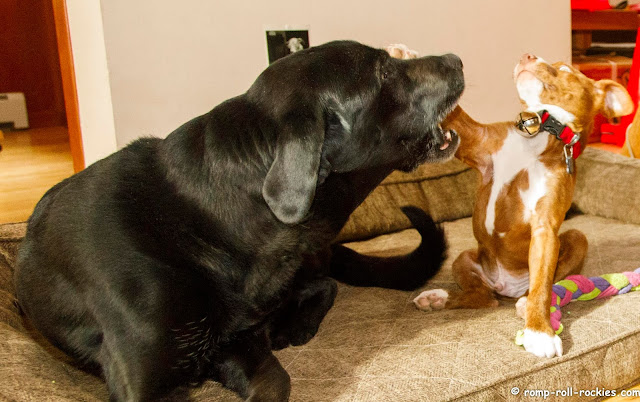 I think that our pack is very lucky to have such a special puppy join us!
Posted by KB at 4:00 AM