Bear digging in the mist

K galloped with high energy, enjoying the cool air, and I pedaled lethargically, feeling slightly blue about another day of gray murky fog. At times, the fog seemed to muffle the forest sounds. But, then the flute-like songs of Hermit Thrushes perched high in the pine trees floated down to me, and the world felt like a place of supernatural wonders.

As we rode along a trail with aspen groves on one side and dense conifer forest on the other side, my front wheel almost slipped out from under me. I avoided a crash and then saw that I'd slipped on a slimy piece of rotting wood that had been tossed onto the trail. As I looked more closely, I realized that a black bear had flung it backwards as he dug under a stump for ants. 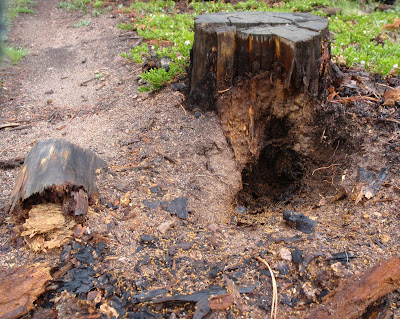 The bear had used his long and sharp claws to pry off the side of a stump. Then, he'd dug a foot-deep hole under the stump. The debris from his powerful digging strokes spread at least 5 feet from the stump.

The hole teemed with orange, diminutive (3 mm long) ants. Every iota of space bustled with action as this ant colony worked to deal with the disaster that had befallen them. Undoubtedly, the bear ate an unfathomable number of ants. However, two things baffle me. How does an animal as big as a bear get worthwhile fuel from eating tiny ants? And, how does he eat them without getting nasty bites on his lips? The bright color of these ants made me think that they probably stung when they delivered a bite so I kept my fingers and K away from them. 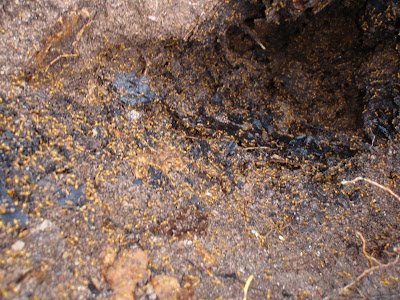 Many of the ants struggled to move white worm-shaped larvae. Ants go through four developmental stages: eggs, larva, pupa, and adult ants. Larva start tiny but grow to the size of an adult ant. Larvae are groomed and fed regurgitated food by adult worker ants - an obvious case of the adults raising the next generation for their colony. When a larva grows to full size, it spins a cocoon around itself (pupal stage) and metamorphoses into an adult ant.

As I watched the flurry of activity, I noticed that the ants were focusing their energy on moving the biggest larvae, perhaps trying to drag them to protected crevices where they could survive despite the 38 degree temperature. 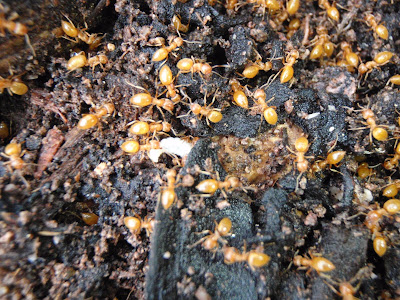 The larvae almost matched the worker ants in size so moving the larvae looked like arduous work. The ants mostly pulled and dragged the larvae across the rough ground, although their destinations weren't obvious. Sometimes, multiple ants worked together to move a larva. 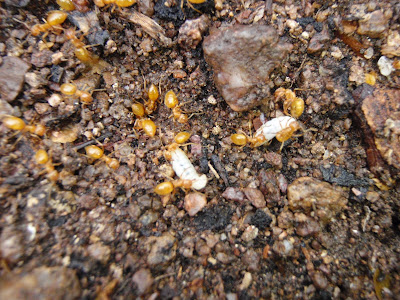 Through all of this, K lay next to my bike looking profoundly anxious. She drooled, a classic sign of anxiety, as she always does near bear scent. However, I felt confident that the bear had passed through many hours earlier based on my observation that the pelting overnight rain had erased his tracks. 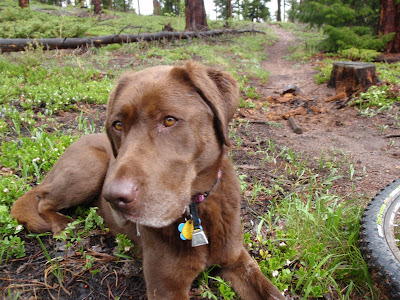 When we reached our favorite vista, the mountains had vanished behind the storm clouds. But, the sun weakly burned through the fog, illuminating phantom aspens and pine trees. 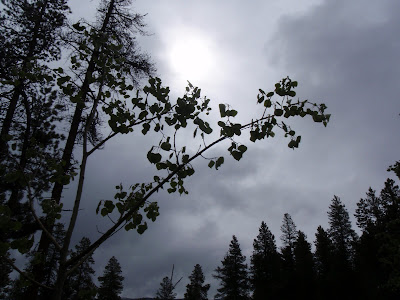 Later in my ride, a hummingbird hovered around me, convinced that my purple jacket contained nectar. This cold weather is tough on these tiny high altitude birds, and they need amazing quantities of nectar to fuel their flight and keep them warm. A few minutes later, he found a better source of nectar. 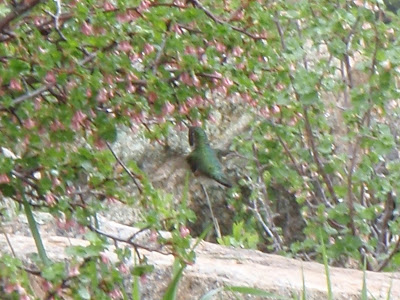 As he hovered, this Broad-tailed Hummingbird drank nectar from a red currant bush with elongate bugle-like pink blossoms. 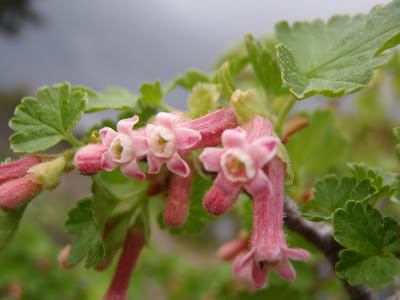 I enjoyed this touch of summer in a cold and gray ride. Just a bit later, another touch of summer crossed my path. I spotted my first Cordilleran Flycatcher of the spring. These olive-green birds, who subsist on flies that they snag out of thin air, nest under my deck every summer. They migrate, albeit in a leisurely trip, from Mexico to places as far north as Alaska. That's awe-inspiring to this mountain biker who gets tired just crossing her trail network.
Posted by KB at 4:15 PM