A bike ride though nature and the canine spirit

My two exuberant younger dogs, K and R, mountain biked with me this morning. The sun briefly came out early in the morning, illuminating a phantom-like forest. 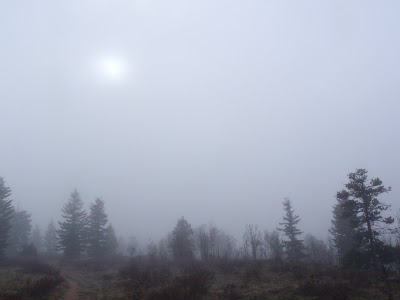 On murky spring day like today, the sheer number of spider webs woven into the fabric of the shrubs overwhelms the forest. All the whitish spots in the reddish-brown shrubs are silk webs, glowing with condensation. 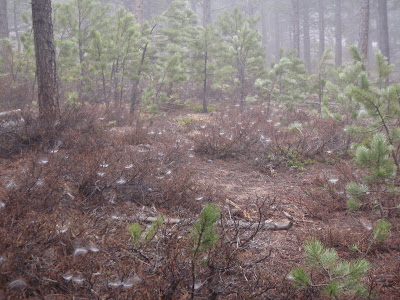 As I paused, K declared that it was play time. It's unusual for her to goad R into playing with her - it's usually the other way around. They frolicked on a soft wet carpet of ever-greener knik-knik, a leafy ground covering with red berries. 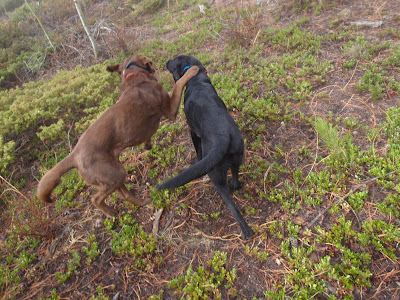 Of course, a stick became the play object - they are labradors, afterall. The photo below makes K look very skinny. We recently increased her thyroid supplementation, and she may need more food. Time for a weigh-in! 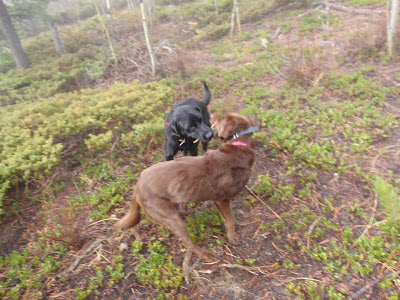 Although it was another foggy, wet, and dark day, I could see the plant colors brightening, even compared to a couple of days ago. The reddish tinge, with a touch of green, of these shrubs is subtle but new. 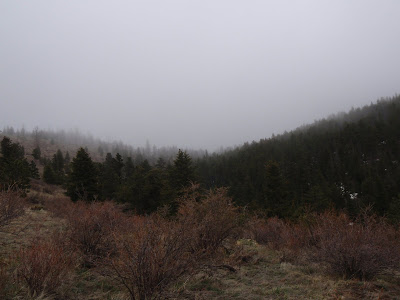 When I looked closely at the bushes in the foreground, I found leaves! I know, for those of you in warmer climates, green leaves growing on bushes do not constitute a big event. But, high in the Rockies, it's an exciting find because the mountain world has yet to explode into springtime. As I photographed the leaves, I imagined the complex biological processes that were coordinated to allow the newborn leaves to finally unfurl. Physiology, in plants or animals, is so complicated that I'm astonished that it works so reliably. 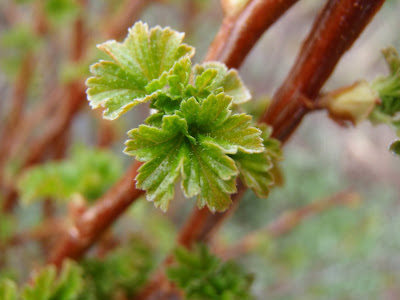 A lot of flitting and flying motion caught my eye among the shrubs. Those Ruby-crowned kinglets that I first spotted yesterday have decided to torture me. They're following me everywhere but then flit away before I can photograph them. Today, a pair chased each other relentlessly, from one shrub to the next, around boulders, and among pine branches. I caught one as she took off from a bush. If you look carefully, you can see that her beak, eye, and two outstretched wings. 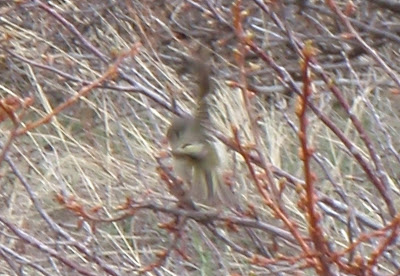 Then, I caught a kinglet off-guard, staying still. They mostly eat bugs but also will eat the foliage from pine trees, which might have been what she was up to in the photo. The only obvious signs that it's a kinglet in the photo are her diminuitive body, short tail, light-colored chest, and white wing bars. 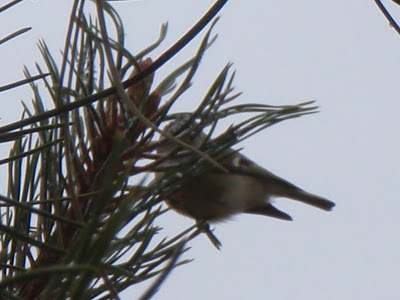 If this pair of kinglets breeds, they will lay as many as twelve eggs in a nest hidden high in a conifer tree. The female almost constantly incubates the eggs for almost 2 weeks and then keeps the naked chicks warm for a week, leaving the nest for brief 5 minute forays. Once the chicks have feathers, a parent arrives with food every 1-2 minutes, all day long. Imagine twelve tiny beaks gaping open when mom or dad returns to the nest with a bug. That's a lot of beaks to feed and a lot of hard work for the parents!

On the way home from the trails, I confirmed that the mountains, completely obscured for a couple of days, are indeed still standing tall. The clouds briefly parted, revealing only the local ski area and no other mountains. 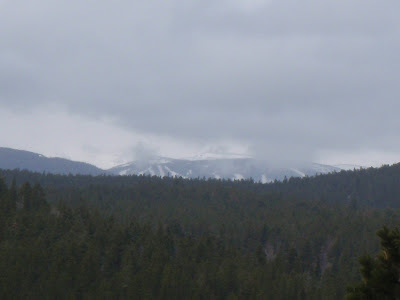 When I arrived home, I had a brief scary moment when S remained motionless, lying on his bed. My heart accelerated with fear, and I stood in the doorway watching closely to see his chest wall rise and fall with a breath. Afterwards, I realized how silly I was - he's deaf and didn't hear me open the door. But, it reflects how much I subconsciously worry about him, even though he's holding his own right now. 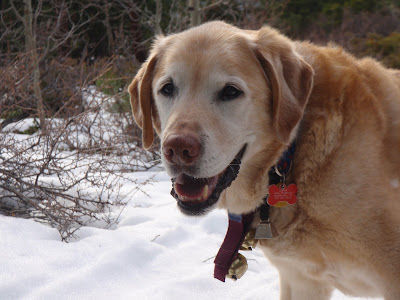 S is a good example for me. He must know that something's not right with his body but he's the first to remind me when it's time to hike and enthusiastically tackles the trails even when we run into unexpected obstacles, like deep snow or massive fallen trees blocking the trail. On rough terrain, he occasionally stumbles and face-plants, but it upsets me far more than it bothers him. He trots onward, with his usual happy and hopeful face, as if nothing happened. He's seizing every day, rather than brooding over what might happen in the foreseeable future.
Posted by KB at 3:50 PM