Thick fog surrounded and enveloped K and me as we rolled out the door this morning. I'd procrastinated in remarkably creative ways because the weather looked so nasty - fog, light rain, and 30 degrees. But, I had a relaxing and fun time riding through the surreal world. It seems that I might never truly learn, and commit to long term memory, that it's almost always fun to mountain bike through the forest with my dog, even on nasty weather days. Almost immediately, K and I bumped into my husband and R as they ran. Just short distance away from me, the fog seemed to consume them. 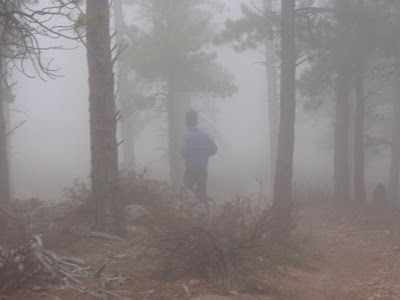 The rain and freezing temperatures created art from K's fur and eye whiskers. 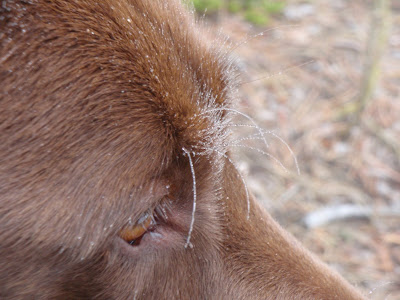 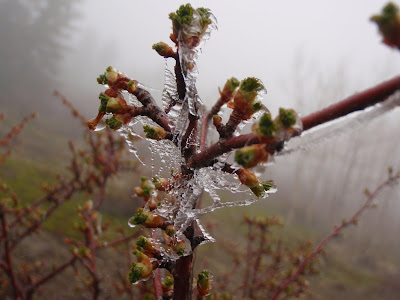 As I passed by the meadow where the swallows and mountain bluebirds jousted over a nestbox the other day, I noticed that the swallows had 'abandoned ship' - probably fleeing the frigid mountain weather to the relative warmth of the flatlands. In place of the swallows, Western Bluebirds, who mostly live at lower elevations, fought for territory with the Mountain Bluebirds. The plumage of Western Bluebirds contains rust colored feathers while the Mountain Bluebird plumage is crystal clear blue and white. The photo below captured what I think is a female Western Bluebird (her mate was perched a bit further away) with puffed up feathers to keep her warm. 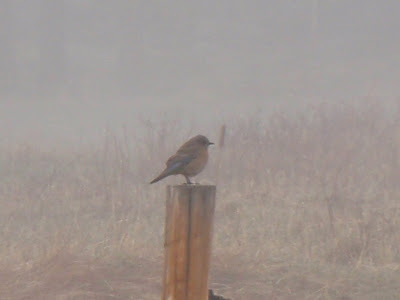 As I passed the willows whose catkins I focused on yesterday, a plethora of birds flitted in their branches. The photo below was intended to include a bird, who zipped out of the picture before I captured her image, but the lushness of this microhabitat is overwhelming. 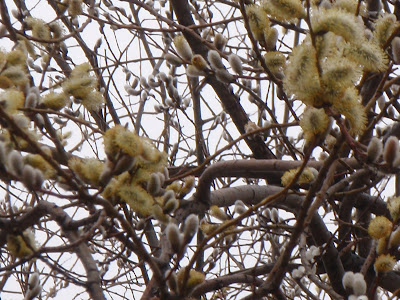 A Cassin's finch carried nest material in her beak while perching in the willow. Then, a pair of new migrants fluttered from one branch to another, Ruby-crowned kinglets. The one photo I captured of a kinglet was overexposed but it shows how small she is. In fact, kinglets are among the smallest of the songbirds. 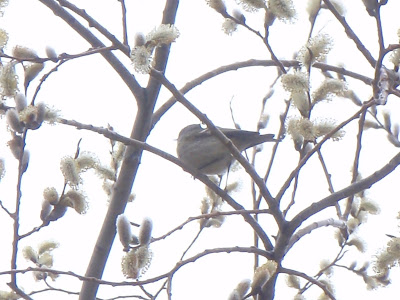 I borrowed a better photo, mainly to let you imagine how well the kinglet's plumage blends in with the yellow willow catkins. 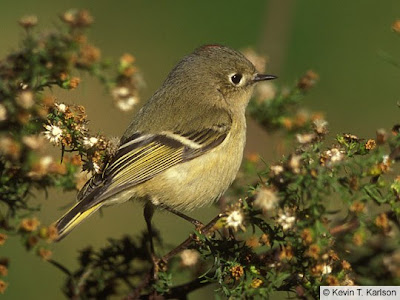 After the cold numbed my fingers during bird photography, I rode through the fog down to the usual water's edge of a reservoir. I found an almost empty basin except for the creek feeding it. On the last occasion that I visited this spot, heavily bundled people played ice hockey on boots while monitoring fishing lines dropped into ice holes. It looked dramatically different today. 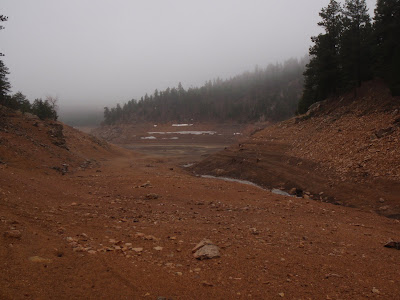 Next to the basin, wild flowers bloomed while covered in water and ice droplets. Their purples and yellows splashed the drab foggy day with color. The purple gem was, I believe, a Storksbill. 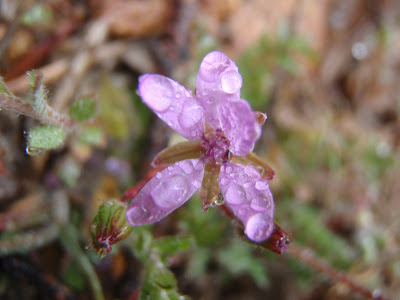 I believe that the second colorful flower was another 'weed', Wild Alyssum. 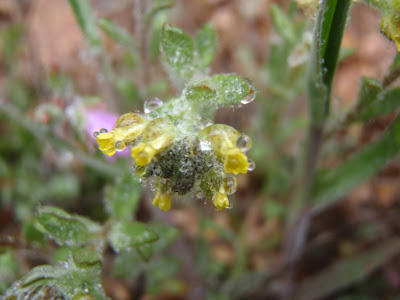 Even if the rest of the world classifies these flowers as weeds, they brightened my day.

For the rest of my ride, I decided to 'get over' being tentative about my health scare from the other night, and I rode hard from the water's edge up to a ridge top. I played my pace-changing game - 1 minute of hard fast spinning followed by 1 minute at a sustainable pace. A big part of what I love about mountain biking is that my entire world tunnels down to navigating a narrow path, pushing my burning muscles to keep pedaling, and listening to my the sound of my breath. For brief intervals, nothing else invades my tranquil mind.

Real life is rarely so simple as a long hard mountain bike climb but it's good to have sweet escapes. Between S's cancer, a close relative's rapid decline, my iffy health, and all the tempetuous events in the larger world - I think that it's important that we make time to do what we love. For me, riding my mountain bike and spending time with my human and dog pack top that list.
Posted by KB at 5:15 PM