As I sipped my morning coffee, the cacophony of S and K playing with kibble-dispensing balls dominated. S might be sick - but he cannot resist the allure of a ball filled with treats! He's the sagest of the three dogs about how to extract the ball from tight spots. Neither K nor R has learned by watching him - R barks at stuck toys and K gets too scared to try to reach them. 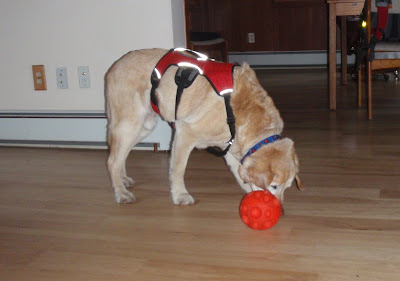 After nearly a full day of gully-washing rain yesterday, green was the color of the day although the low cloud ceiling gave a dull gray background. K and I rolled through a towering aspen grove as we headed for the high trails. At this time of year, the trails that require sweat and panting to attain them are the only empty ones. That's a contrast to the winter when only a few hardy souls travel any of the trails! 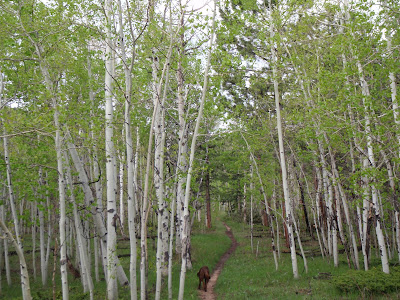 I spotted fluorescent orange clusters on a dwarf juniper bush, so bright that they stood out like a neon flashing sign from 50 yards. 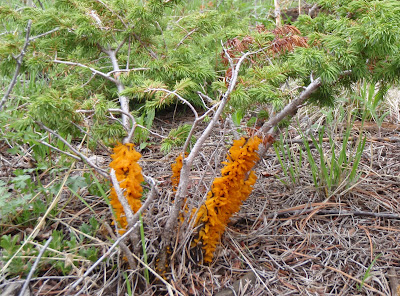 I believe that this intricately constructed fungus is Cedar-apple rust (Gymnosporangium juniperi-virginiana). It swells, making itself obvious, in wet conditions - like the last few days. 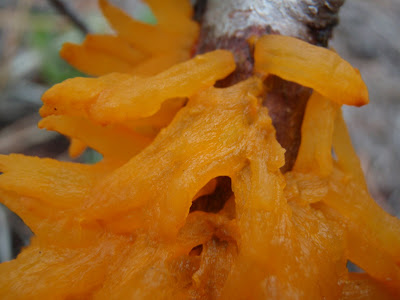 From our local summit, I saw that fresh snow completely covered the only mountain illuminated in sunlight. 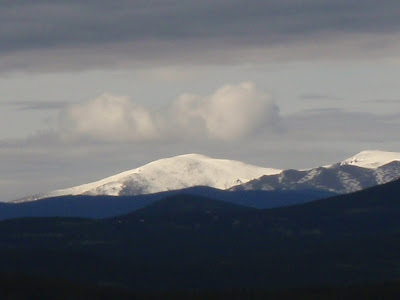 The rest of the towering giants looked as threatening as yesterday, with swirling dark clouds shrouding them but a sliver of blue sky hovering over them. 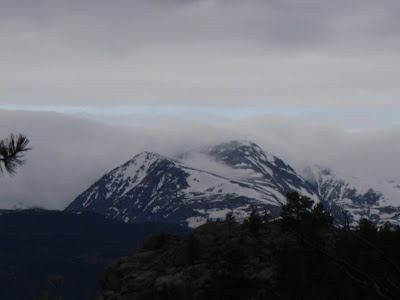 As I rolled through a mossy pine forest, I spotted about ten delicate orchids, Fairyslippers (Calypso bulbosa), that have just blossomed. From a distance, they're not noticeable. Each plant stands only about 6" tall, with a red stem, a single basal leaf, and a nodding pink flower. But, if you lie on the forest floor to look up at these rare flowers, their beauty is inspiring. They use a 'pollination by deception' technique. They look like flowers that have nectar but produce none. However, their pretty blossoms attract insects seeking nectar who then pollinate the next blossom they visit. Eventually, an insect realizes that none of these flowers have nectar but usually pollinates a few blossoms first. 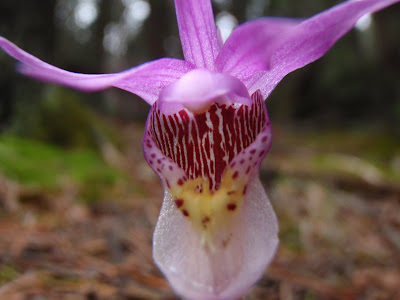 Incongruously, as I sat in the previously peaceful pine forest enjoying the orchids, a fighter jet zoomed overhead, a sonic reminder of the Memorial Day celebration underway in the city. It made me reminisce about my most traumatic Memorial Day ever - the year that I was the first and only girl in my town's Little League Baseball program - and was supposed to march, in uniform, with my team in the town's parade.

Title IX had forced the uncooperative league to let me join, and Memorial Day was near the the season's end. Over the season, I'd taken heaps of abuse, mostly from fathers, yelling awful things at me as I played 2nd base or batted. I loved playing - so I was willing to endure the nastiness on the field - and, to my surprise, was named to the All-Star Team by the coaches. However, I truly dreaded having to march in our town's Memorial Day parade with my team. I asked my mom if I could get my waist-length hair cut short before the parade to make my gender less obvious from a distance. My mom, as usual, rose to occasion, pointing out how I needed to march proudly for all girls who wanted to play sports - and that the insult-hurling grownups were small-minded people with cold hearts, certainly not worthy of a haircut. As it turned out, although people gawked with surprise at a long-haired girl in a baseball uniform, the long parade passed faster than I expected. In retrospect, I bet that it was one of my mom's proudest days.

Today, I was pulled back to the present when I reached a vista, and storms were collapsing onto me from all sides. The view to the east: 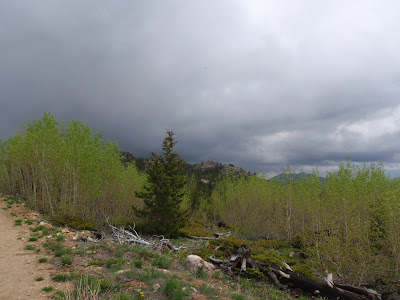 And the view to the west: 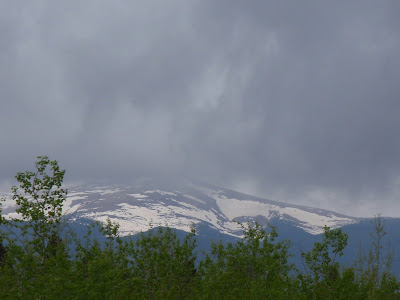 Those clouds launched me into time-trial mode in a race to beat the storms home. I passed through parts of the forest where hail clumped in piles next to the trail and mud from a very recent downpour sucked my tires into the ground. But, I outran the storms, arriving home dry and happy.

It seems that the daily thunderstorm part of summer has arrived. Now, please, could the sunny and warm part start?
Posted by KB at 4:43 PM