It was a long week - especially with my worries about S. He's developed an infection at the primary tumor site that we're having trouble eradicating. The vet worked on him yesterday, and I found myself quietly pleased that her follow-up instructions included a re-check in two weeks. Perhaps, I thought, that means that she expects him to be going strong in two weeks. I hope so but nothing feels certain anymore. That anecdote might give insight into one reason why I feel so drained.

Yesterday evening, we took very slow trail hike, a small part with all three dogs. During S's short stint, he kept stepping on my heels, as if I was too slow for him, and that elicited a smile from me. We decided to extend his distance a little since he was having a good day - another smile from me.

The looming cloud front painted a beautiful skyscape. I think that I'm a 'cloudophile'. 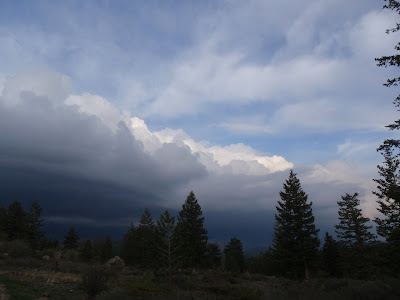 Over the course of our hike, the clouds squeezed out the blue sky, leaving a gray and hauntingly pretty horizon. 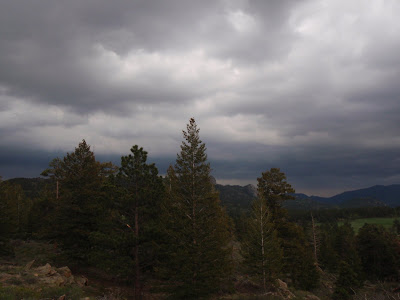 This morning, the frenetic energy of K and R dogs could easily have powered my pedaling as well as their running. They ran hard, panting loudly and gouging paw tracks into the hard dirt, for almost the entire ride. They continually criss-crossed my path, circled behind me, and sprinted past me.

When we arrived at the boulder-filled hillside where I found a lion track a few days ago, both dogs ratcheted up their energy to unfathomable levels. I could barely contain them, as they tracked something, with their noses to the ground. An emphatic recall finally pulled them out of their frenzy, and they returned to sit with me. I wondered if a lion has cached a kill nearby or is loitering in the area for some other reason. I decided to turn around there so that we wouldn't have to run the gauntlet again on the way home. 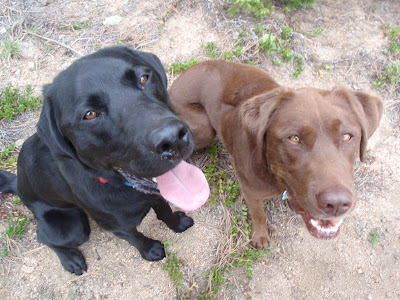 After I dropped off the pups, I rode a familiar route but kept spotting hidden trails in the National Forest that I've never noticed before. I ended up wandering around in the woods, next to imposing rock outcroppings, among spindly pine trees, and through rustling aspen groves. It's invigorating to explore wild places where I've never set foot or tire before.

I then hit a familiar ridge-top trail but the view looked alien. Normally, the mountains on the horizon dominate this look-out but today the verdant aspen grove was the highlight. 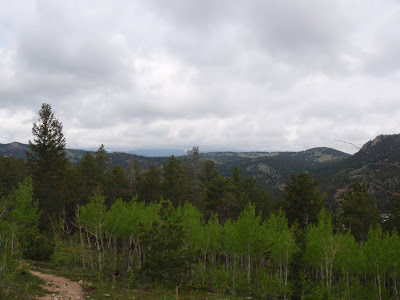 I spotted a newly blooming wildflower - a tiny beauty - that looks more intricate and dainty in closeup than I imagined. I believe that it's Rosy Pussytoes (Antennaria rosea), and that the flowers will open further with more sun. 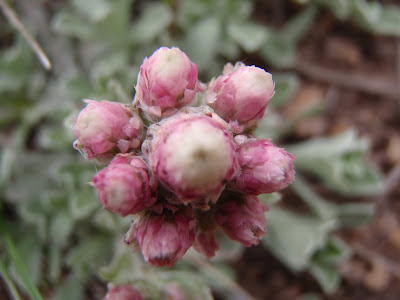 As I arrived home, I knew that the spring-summer season had officially begun because I ran into a group of city visitors who were trespassing to get onto the trail network. I hate that situation - because I understand the urge to find great riding trails but the number of gonzo mountain bikers barging across our land has become unpleasant, for us and for our neighbors. The urge for non-locals to trespass must be strong because private land lines almost the whole road but national forest sits invitingly behind it. Legal trailheads exist but the nearest one sits a few miles away. I tried to be friendly while firmly telling them not to come back. I'm not sure if that combination is actually possible - but it was a good sign that they remained amiable as they departed.
Posted by KB at 4:51 PM