As the sun set, the sky behind the mountains tinted purplish gray. I watched it with our two younger labs, after dropping S off at home. Alas, walking up to the sunset viewpoint has become an exhausting excursion for S so we do a short walk with him and then take the younger labs out for some more energy-burning exercise. I missed S as we watched the sun set. 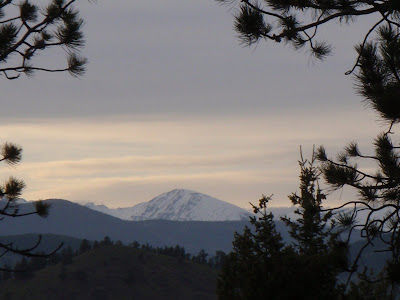 Overnight, our wildlife camera, activated by motion, snapped a photo of a coyote visiting the base of our bird feeders. The camera is set to take a photo every 30 seconds as long as it perceives motion. It snapped only one photo so I'm guessing that the flash immediately scared away the coyote. I wonder if this guy is a parent, out foraging to bring home food for his mate and pups. Or, perhaps he's a youngster, helping an older breeding pair raise their young. My impression is that the local coyotes currently have very young and helpless pups in dens, and that the mothers aren't venturing far from the dens yet. 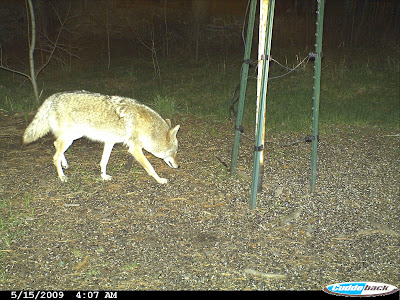 This morning, as K headed out for a short walk with my husband, she visited almost exactly the same spot - and had her photo taken. You can see that K exceeds the coyote's size, but not by much! You can also see that her body language exudes tentativeness and fear. She's leaning backward relative to her front paws. She's slightly raised her hackles. To me, she looks ready to turn around and flee at the slightest provocation. I'm certain that she smelled our nocturnal visitor. 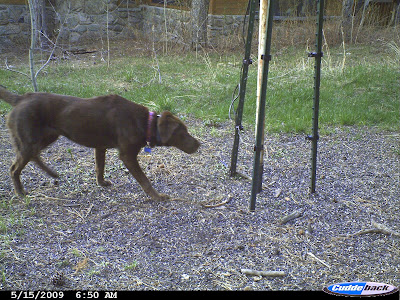 I rolled out the door on my mountain bike, with K by my side, a little bit later, to singing birds, chickadees entering and leaving one of our nestboxes, more infant aspen leaves, and rapidly changing cloud formations. 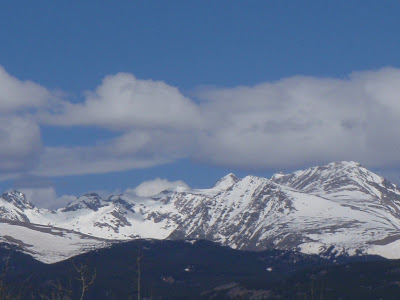 Along one trail, the emerging aspen leaves almost blocked the mountain views. I'm not complaining! 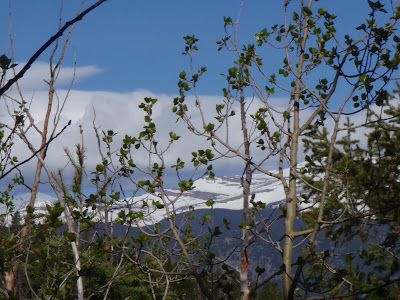 After dropping K off at home, I noticed a Golden Mantled Ground Squirrel sitting stationary on a red rock, nearly camouflaged, monitoring my progress. I wouldn't have noticed him except that I know this rock's usual shape perfectly so the tan head jutting above the rock caught my eye. 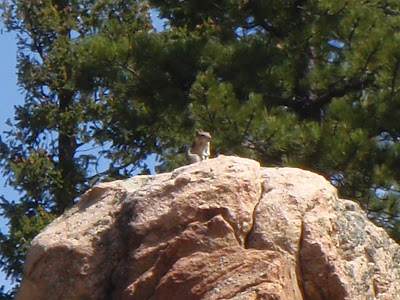 As I rode along enjoying the warm sun on my back, a variety of animals crossed my path. Two deer tried to cross the trail in front of me but one of them decided to hide by freezing in place. I saw him close-up, and he had a healing gash on his side. It looked like he'd had a nasty struggle with something sharp - barbed wire or perhaps a cat - that had left a 10" long curved deep cut on his side. Today, the cut itself had almost healed, and fuzzy new fur filled in around the wound.

A little bit later, a wild turkey moseyed across the trail in front of me. He strutted confidently, even when I dropped my bike, pulled out my camera, and started angling for a good photo. He walked away patiently as his oversized bird feet tracked up a hillside. The prehistoric-looking bird weaved from side-to-side at a brisk walk, making his own switchbacks to avoid climbing steeply. Wild turkeys can run fast and even fly but he didn't seem to think that I posed a serious danger.

This turkey looks like a 'he' to me based on the reddish throat but I'm not certain because the body looks so brown - no greenish black tint like the bird guide book photos show on the body of a male. Can anyone help me? 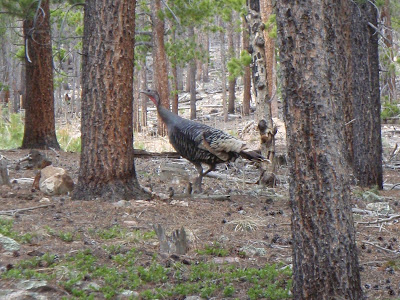 By the end of my ride, the clouds had reformed in a new creative pattern over the mountains. I'd enjoyed my ride but never felt the springtime elation that a day like today usually brings me. I think that our many recent stresses are taking their toll. I certainly feel it in my spine - muscle spasms that start just hours after a bike ride and headaches that won't quit. On the upside, I had one piece of good news yesterday - my immune system is fine. The extremely low neutrophil count and ensuing drama was manufactured by a serious lab error and then the lab's lack of communication with my doctor. Now, if only S's cancer would spontaneously disappear. I know it won't happen but I can dream. 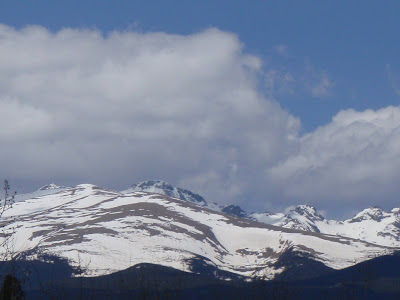