Rough times. We all go through them so I don't think my situation is unique or especially heinous. My mother-in-law crossed the creek early this morning, on the same date as she gave birth to my husband many years ago. It wasn't sudden, unexpected, or even tragic - it was a passage at the end of a long and good life. But, after every encounter with death, I'm struck by the fact that the Earth keeps turning, the sun keeps rising and setting on time, the birds keep twittering, the squirrels keep scampering, and the wind keeps blowing. When my mother died, I was momentarily shocked that her watch hadn't stopped at the instant of her death. Unconsciously, I'd expected that time must've stood still, at least briefly, when she slipped away. For that young and naive version of me, it was an eye-opening lesson about the transience of our lives compared to the unstoppable ticking of time on Earth.

It's a small thing by comparison but S had a terrible day yesterday. When I needed to go to the city last night to help my husband, S couldn't stand upright on his own. He kept toppling over because his hind end was so shaky. I sat on a step and briefly cried inconsolably. I might've become mired in the quicksand if weren't for my close friends - the kind of friends who you call when you're falling apart. When I called them, I didn't have any plan but burst out in barely coherent babbling. They simply stepped in and helped me. They say that S rebounded rapidly while I was gone. By the time I arrived home, he was standing, walking, and wore his usual goofy happy expression. I love that boy. And, I love my friends.

K's hives, facial swelling, and vomiting that started on Saturday worsened this morning - another small development in the big picture but we know how rapidly her allergic reactions can escalate. She looked and acted fine at the start of a short mountain bike ride but lumps protruded from her face and her eyelids swelled and turned angry red a short time later. We gave her Benadryl, made a vet appointment for this morning, and my husband watched over her while I rode a bit more. At the vet, they gave her a steroid injection and sent me home with my very own syringe of steroids for future severe allergic reactions - we live too far from the vet to be sure that we'd make it there in time to save her if a reaction took off. She seems tired now but is no longer so lumpy or swollen. We can't figure out the culprit. That makes me nervous because K is so precious to me.

I rode my mountain bike like a fiend this morning - just hammering my stress into my pedals. While K was with me, I snapped a photo of her running in her usual spot, just to my right. I love when she looks up at me and our eyes meet while doing something that we both love. 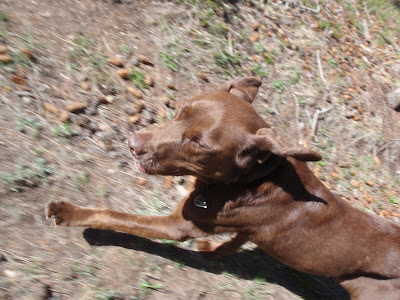 Other times, she just runs - no looking up or anywhere in particular. Just like me except that I don't have such photogenic ears. After I dropped K off, I rode harder than I've ridden since last fall. I barely looked at the flowers, animals, or mountains. I just rode as fast as I could, which wasn't a scorching pace since my fitness is far from peak, as usual for early spring. My world narrowed to me, my bike, and my free-floating thoughts. I don't know exactly what I thought about but I felt cleansed when I coasted down our driveway.

I did look up and notice a 14er with clouds already gathering around its craggy peaks despite the early hour. I know that I say this frequently - but living in the midst of mountains and nature brings me peace even in the turbulent times. 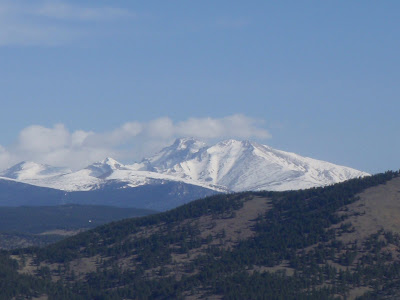 After last night's episode, I know what sits on the horizon for us and that's saying good-bye to S. It's not time yet. He's moving well today, and spontaneously getting up to play with his kibble-dispensing toys. When I look in his eyes, I see that he's still happy with life. It's a roller-coaster ride but no one knows how long the ride will be. Hopefully, our love for S will give us the wisdom to recognize when it's time. 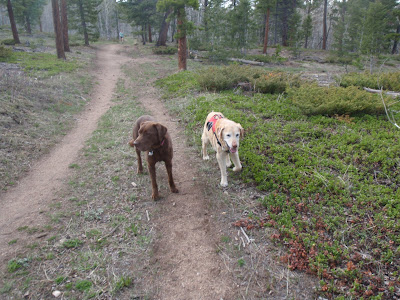