Living and riding in the midst of nature

One of the simple pleasures of springtime is having my morning coffee on the deck. This morning, the thermometer read 42 deg, so I donned an extra layer to venture outside. Yes, 42 deg at 7AM is warm here! Spring is everywhere, especially in the plethora of newly blooming flowers, like the Pin Cherry shrub below. 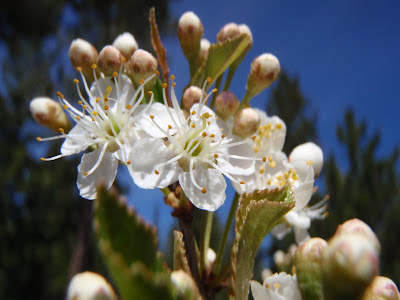 As I drank my coffee on the deck, I listened to the flute-like song of my favorite summer bird, the Hermit Thrush, who arrived on Saturday. A pair sang back and forth, their ethereal notes cascading down from the tops of pine trees. I almost never see these birds - they're invisible singers. But, I stop in my tracks for their songs.

As I listened, my husband and the trio of labs hiked past. About a minute later, a jet black form galloped away from our property into the forest. I thought, there goes R, our young black lab, charting his own course like a typical teenager. Then, my sleepy brain wondered why I didn't hear my husband calling R back to him. I peered around the corner and saw all three dogs with my husband disappearing into the forest. I'm mentally slow before my coffee kicks in but I realized that I'd actually seen a wild animal, not R, sprinting into the forest. Then, I remembered the big thump that we'd heard under the deck just before crawling out of bed and the nervous barking by our dogs while I made coffee. Hmmm, I thought, I bet I saw a black bear who'd been lurking at the forest edge watching me eat breakfast.

Later, my husband said that S let loose with his 'spooky barking' near the start of the walk - he stared into the forest and barked menacingly, seemingly at nothing. Bears trigger his spooky barking. My guess is that our bear-visitation season has officially begun. We always have a flurry of visits in May and June until the bears learn that no food is accessible here.

Unfortunately, the bear didn't visit the base of our bear-proof bird feeders - so our wildlife camera didn't snap his photo. But, a coyote visited around 1AM last night, and again, K and R went directly to the spot where he'd stood, and had their photos taken, when they started the walk this morning. 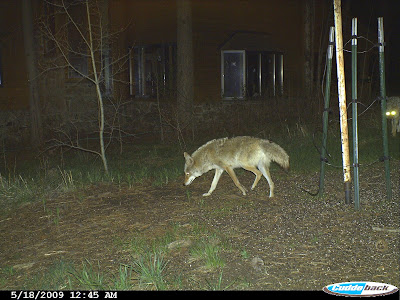 After my coffee, K and I rolled onto sun-bathed trails. At high elevation, the sun heats the world rapidly so it was already 20 degrees warmer than when I first ventured onto the deck. We made a bee-line to a trail that immediately plunges into wilderness. Our turnaround point was a mountain meadow that showed only subtle stirrings of spring but had stupendous mountain views. 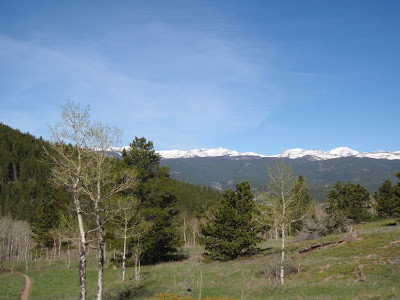 The warm sun has been cooking the mountain snow, transforming our usually languid creeks into fast-flowing torrents. More dark spots appear on the mountains daily. 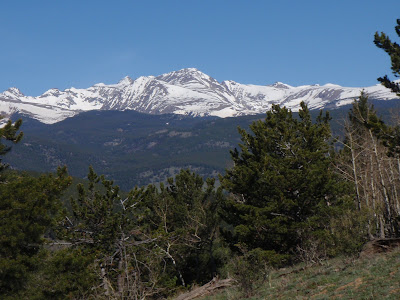 As the sun soaked my skin and K's fur, we both heated up. K slurped water from my camelbak. 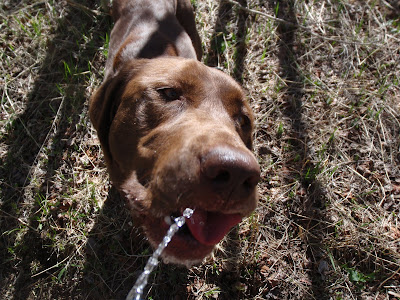 When I arrived home to drop off K, a hawk stood at the base of a pine tree by our bird feeders. His massive wings lifted him off the ground sluggishly, carrying prey in his talons as he flew low to the ground, maneuvering through the pine trees. A pile of feathers, from a hapless white-breasted nuthatch, littered the ground. I'm not sure if the raptor was a Northern Harrier or a Cooper's Hawk but I'm beginning to think that we need to deter him. He's sporadically hunted at our bird feeders for a couple of weeks but this is our first direct evidence of a kill. The birds and rodents craftily vanish when they see him arrive but flock back to the feeders when he leaves. While I know that he and his young need to eat, I also feel as if I'm setting out an 'all-you-can-eat' buffet for him. I'm not sure what to do about it. 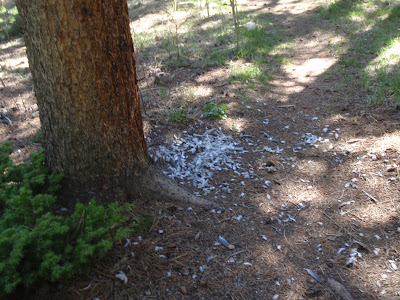 As I rolled along solo through a meadow, a Red-Tailed Hawk swooped close to me. He landed on the apex of a young Ponderosa Pine tree. 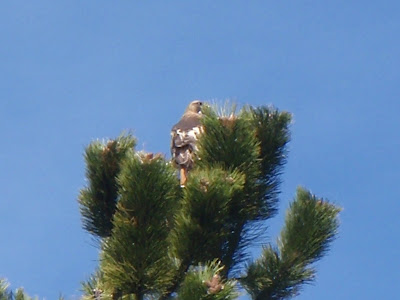 As I moved closer, he soared away. 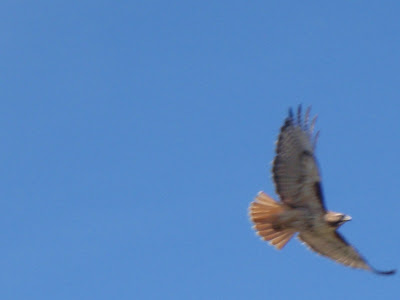 Later in the ride, a hummingbird hovered among the branches of a shrub (a red currant bush, Ribes cereum). As he hovered, he was sipping nectar from ornate and tiny (less than 5 mm across) tubular flowers that looked ideal for hummingbird beaks and long tongues. Pollination will transform the pink flowers into red currant berries that bears can feast on this summer. 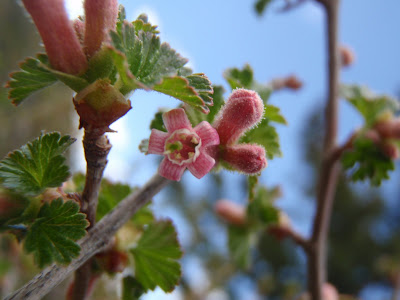 The tubular flowers of a blooming Milk Vetch (Astragalus shortianus) looked hummingbird-friendly too. 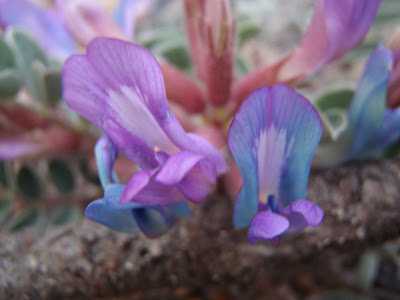 After photographing the flowers, I enjoyed the simplicity of navigating my bike along rocky trails. I have one stretch that I ride regularly. It's technically challenging with loose rocks, boulders, and jutting roots. I found myself smoothly rolling over the obstacles, feeling more confident than ever before. The many hours of snowbiking this past winter improved my confidence on rough trails. Tomorrow, I'm joining a very good mountain biker for a ride - so I'll be able to gauge whether I've actually improved or just think that I have.

The world buzzed with spring energy today. I spotted too many newly blooming flowers to take photos of all of them. Almost all of the aspens and willows sported leaves - some had both catkins and leaves. The world is transforming before my eyes, from a barren landscape to a colorful bursting-with-life landscape. I find it worth slowing down and noticing the details because the dawning of a new season is truly amazing.
Posted by KB at 5:12 PM