I had a cleansing mountain bike ride today which I'll show you mainly in photos - the wonderous natural world was incredibly photogenic today. What an amazing day of contrasts!

K and I rolled onto the trails under piercingly blue skies and a forest that had become exponentially greener from overnight rains. 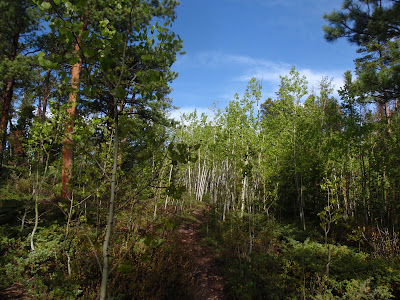 I wanted solitude so I pedaled directly up to the highest trails using secret routes. K and I emerged onto Hug Hill to a mosaic of snowy mountains, puffy white clouds, oozing gray fog fronts, and a few threatening dark clouds. 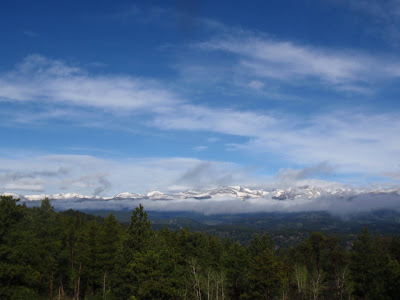 Some peaks glowed in sunlight while others hid behind clouds. 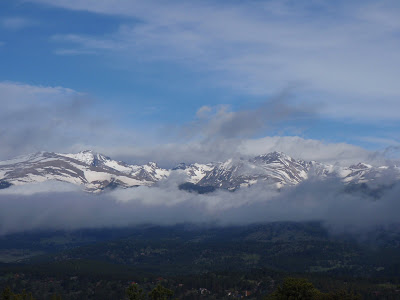 The cloud front seeped along the base of the mountains and some clouds rose up into the craggy wrinkles. 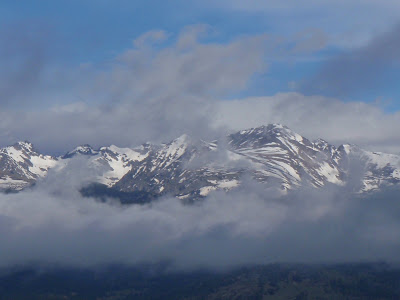 Next, we headed to our favorite secluded trails. We mellowly enjoyed the forest peacefulness and the unique synchronicity that K and I share. It's an amazing feeling, having a dog by my side who acts like she knows me better than I know myself. She's woven herself into the fibers of my heart. 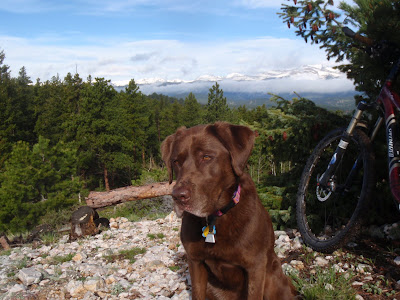 After I dropped off K, the clouds began their sneaky march toward me. 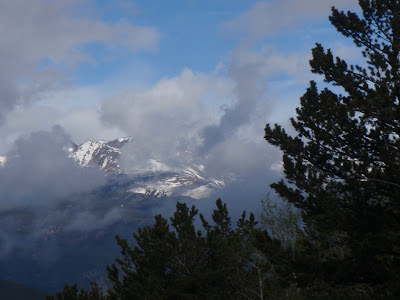 While the sun still warmed my back, I spotted nascent sprouts, maybe 3" tall, with red stems and leaves. If you look carefully at them, they're a natural wonder - so delicate and intricate - yet somehow they pushed up through the dirt toward the sun. These sprouts are the birth of what I believe are Spotted Coralroot (Corallorhiza maculata), an orchid with no chlorophyl. Rather than living by photosynthesis, Coralroots collaborate with fungi to draw energy from the decomposing duff on the forest floor. This energy fuels the growth of beautiful spotted flowers later in the summer. 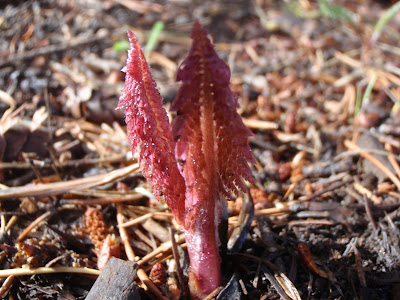 I pedaled up to a secluded trail where I've never run into anyone else. It's deep in the pine forest with no distant views so I had no idea that a ferocious storm was about to assault me. First it rained and then it hailed. The hail was impetus to seek refuge under a dense pine tree. Close to the trunk, its canopy completely sheltered me from the ice pellets and raindrops. Have you ever noticed how birds perch under dense tree canopies during storms? They're onto something. 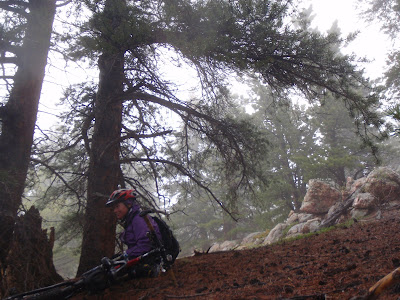 Alas, my refuge under the tree ended with the first thunderclap. I was near the high point of my ride - a stupid place to be in lightning - so I put my head down and pedaled toward home. Rain cascaded down my face while muddy water and grit sprayed me from below. However, to my amazement, I realized that I was enjoying myself despite what seemed like horrendous conditions. In one of my few smart moves, I'd brought rain clothes, and consequently, the chill had barely reached my fingertips. I think that I needed a cleansing and hard ride like this one to wallop me out of my doldrums.

On my way home, the rain and thunder didn't relent but the mountains and their cloud covering started to brighten. 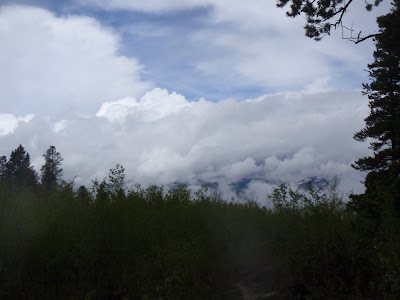 As the thunder and lightening moved threateningly toward me, I put my head down and hammered toward home. I nearly did an endo when a mule deer pronked across my path just 15 yards ahead of me. I scanned the forest and saw that other cryptic deer watched me from the sidelines. 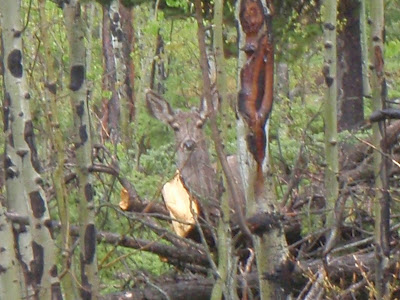 Sometimes I forget that the wild animals have to survive our ferocious mountain storms with only the forest to shelter them. I snapped a quick photo and moved away from the deer herd so that they could focus on staying warm and away from the lightning.

I arrived home to a waiting thermos of hot tea and warm towels. While watching the rain and hail pelt our house and the temperature plummet to 40 degrees, my husband had become convinced that I would be hypothermic. So, he was waiting by the door to help me. I think that I'm a very lucky girl!
Posted by KB at 3:31 PM