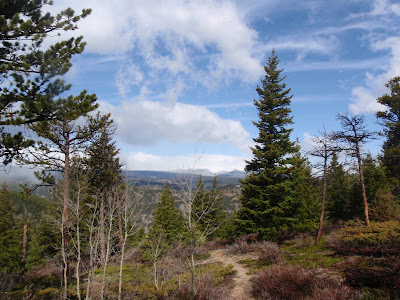 A sweet mountain bike ride - a chocolate lab running along side me, soft dirt trails, beautiful blue skies with dramatic cloud formations, and peeking snowy mountains. What more could I ask for? 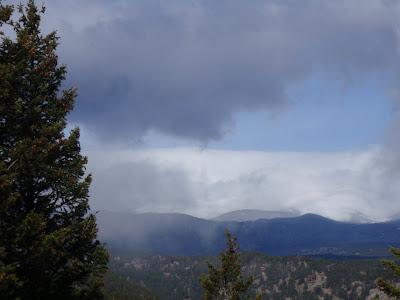 After a couple of days of riding through a ghostly forest with trees barely recognizable in the fog and almost no mountain views, blue sky punctuated by fast-moving clouds dominated today. I brought along full rain gear because the creeping clouds seemed to chase me at times but they never caught me! 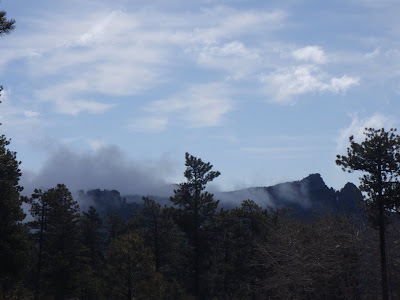 I rode along a ridge, watching the horizon for glimpses of the white mountains. I ran into a number of local trail users, bikers and runners. It was wonderful to catch up with my kindred spirits who I haven't seen on the trails in ages. 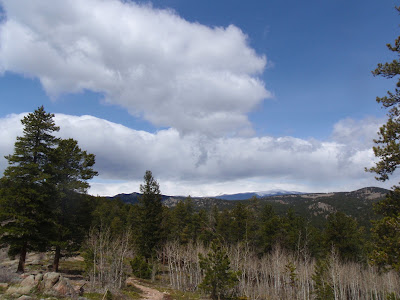 On my way home, I spotted a Wyoming Ground Squirrel, who was so curious about me that he couldn't help himself from poking his head out of his burrow to watch me. At the same time, a Golden Eagle soared overhead so I considered myself the little squirrel's guardian, and kept him from scampering into the open until the eagle had moved on. 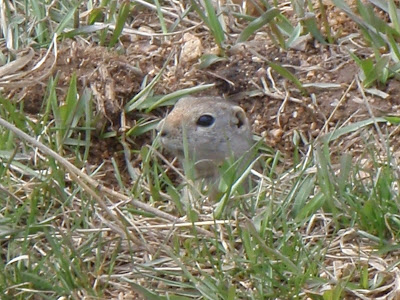 I felt like doing something novel with K so I decided to try training her in scent discrimination - i.e., teaching her to find a particular scent. Scent training has been on my mind since reading about it at Champion of my Heart. I videoed the first session, and I was amazed by how well it went.

I used two identical pill bottles, both of which originally contained the same supplement to avoid K accidentally learning to sniff out a certain supplement. Inside one closed bottle, I placed a used chemical handwarmer as the object that K would learn to find by using her nose. I chose this because it probably smells strongly like a combination of my sweaty hands and the chemicals inside it.

Also, K has experience with a 'Find it' cue that tells her to search for a lost handwarmer out on the trails. I drop them all the time in the winter, and they're hard for me to find in the snow. So, I trained K to find them, pick them up, and bring them to me. It was super easy to teach her to to this because I've trained her to pick up all sorts of things for me when my back is hurting. So, this training was an extension of something she'd already mastered. However, dogs are not good at generalizing so I didn't expect the new exercise to be easy.

At the start of the session, I used just one bottle containing a handwarmer. I was using 'Free-shaping', meaning that I clicked to mark behaviors that were even vaguely related to the final behavior (retrieving the pill bottle with the handwarmer in it) and gave her a treat after each click. K and I have done this type of training many times before so you'll see that she simply tries something new if a certain behavior doesn't earn a click/treat.

At the start, I gave K no cue - I just waited to see what she did when faced with the pill bottle on the floor. When she showed a glimmer of interest in the container by nosing toward it, I clicked and gave her a treat. Next, I waited for stronger interest to give a click - pawing at it. Once it was lying on its side, she tried nosing it but I didn't click because it wasn't a new step toward our final goal. Instead, because we've played many games where she picks up objects, I waited for her to mouth the container for a click. Finally, she needed to pick up the container and place it in my hand to earn a click and treat. After doing this once, she repeated it several times in a row which I spared you from watching. I apologize that the first video is zoomed in too much.


I gradually moved the containers so that neither one was closer or easier for her to retrieve. At the very start of the clip, she did one her favorite naughty tricks - sticking her head in my treat bag to chow down. Aside from that antic, her success rate was very high. I forgot to signal the camera about which bottle was the correct one. But, as you can tell by the click at the instant that she delivered the bottle to my hand on every trial, she was 100% accurate during this clip.


Then, R sniffed loudly under the door. K heard him just as I said 'Find it' for the first repeat of the next clip. She paused to listen and then forgot everything that she'd learned so far. Once she started moving again, she chose the wrong bottle twice in succession. On the second of the failed trials, I made the mistake of encouraging her verbally after she started moving because I thought that she was heading for the right bottle (I usually try to keep my mouth shut). Her only 'punishment' was that I didn't click or give her a treat. Despite how minor that 'punishment' was, before the third repeat, she started whining. In my experience, if she fails more than a couple of times in succession, she goes into a frenzy of whining and randomly tries behaviors that she thinks might earn a click/treat. The training session falls apart because I can't pull her out of her frenzied nervous behavior. To avoid that during this training session, I placed the correct bottle closer to her for the last repeat of this clip. Then, although it's not shown, I repeated this easier pattern about 5 times to rebuild her confidence before placing the bottles side-by-side again.


After recovering from her minor setback, K was doing so well that I was worried that she was noticing something in my body language that told her which bottle to pick. For the last couple of repeats, I mixed up the bottles really well and I pointed at the correct one so that only the camera and not K could see it.


It's interesting to notice that she often goes directly to the correct bottle and does no debating before deciding which one to retrieve. However, after picking up the correct one, she sometimes carries it on a path so she can sniff the other container. Perhaps she's double-checking that she made the correct choice.

This session was, by far, more successful than I expected. The most surprising part to me was that her nose led her directly to the correct container, with no need to sniff both of them.

I think that, for our next session, we'll review what we did in the first session and then try adding a third empty container.
Posted by KB at 9:00 PM